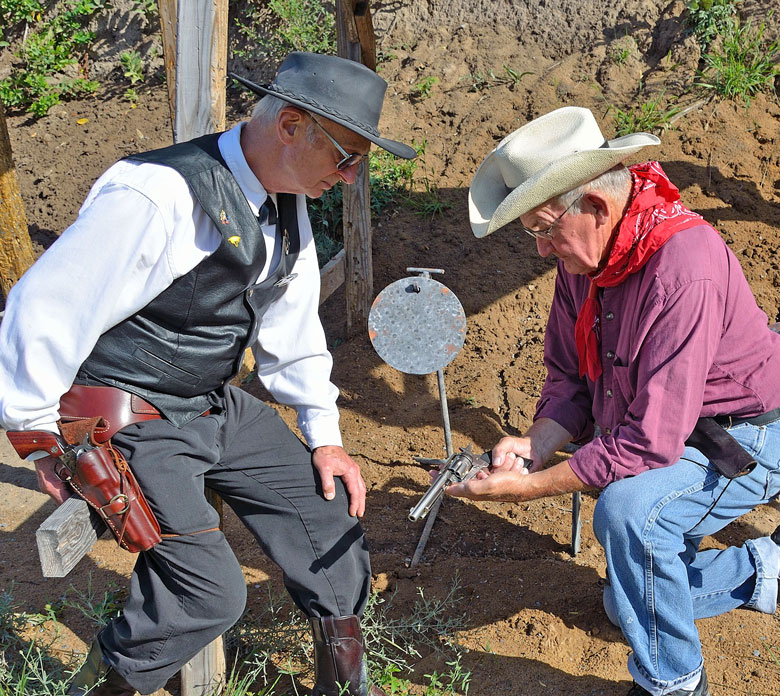 Many budding Cowboys and Cowgirls might like to try their hand at the game that swept the country three decades ago. But you’ll need to purchase several thousand dollars worth of center fire handguns, lever action rifles and double barrel shotguns. Then find an appropriate place to practice.

It would be nice to know that Cowboy Action is for you, before you mortgage the ranch. The Colt Peacemaker pellet pistol can help you do just that.

SAFETY FIRST. Never use a BB-firing pistol for Cowboy Action Shooting! BBs will ricochet back from the targets and may hit you, or something other than what you intended. Always wear shooting glasses whatever you’re firing! 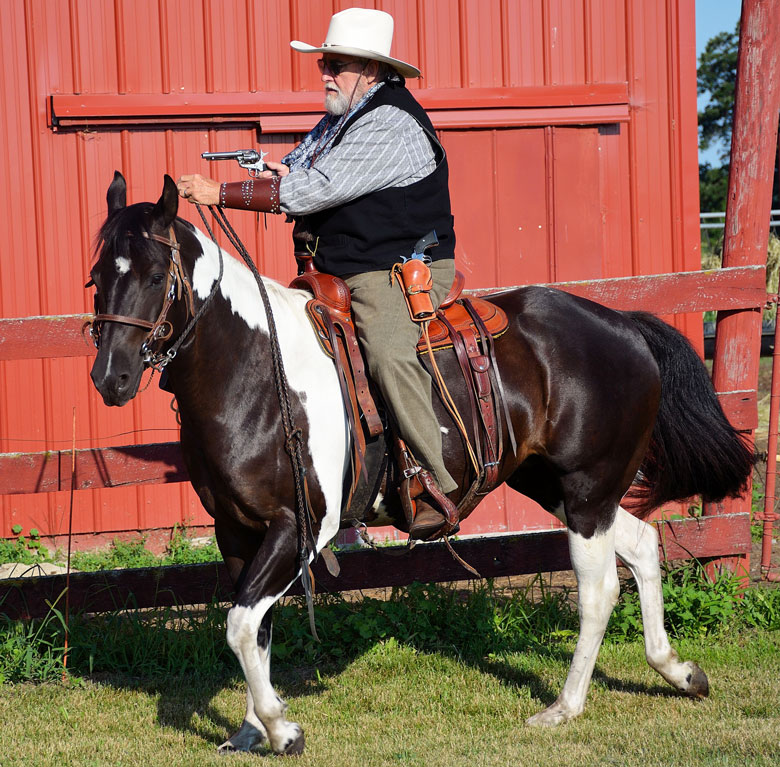 I won’t repeat aspects of their thorough review here, as the Colt Peacemaker pellet pistol is identical in design, quality and engineering. The exceptions being cosmetics and the use of 0.177 pellet ammunition.

Accuracy on the Range

Once the Umarex Colt arrived,  I wasted no time in contacting my shooting buddy to test the gun. Shotguns have always been my first love, but Ron Keller is a lifelong handgun aficionado. If the Colt Peacemaker pellet pistol had any flaws, he would point them out in short order. 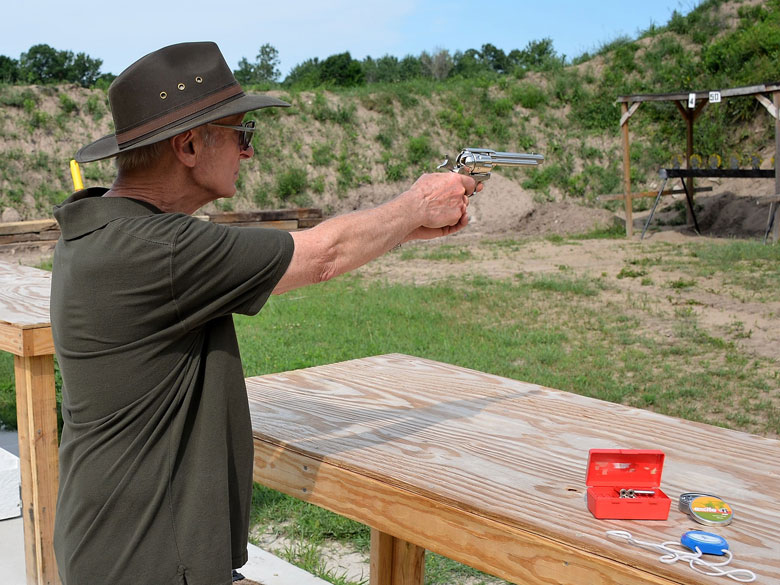 Ron was immediately impressed with the quality of the workmanship. How much does it retail for, he asked? $149.00 was my reply. He smiled approvingly. But I knew his final evaluation would be in the shooting, not in the appearance.

I had loaded 12 cartridges with RWS 7 grain Diabolo Basic pellets, but let Ron put the gun on half cock, open the loading gate and slide six of the silver cartridges into the rotating cylinder. At this point he wasn’t aware of the 12 Gram CO2 cartridge concealed in the grip.

Ron simulated a draw from the hip, and promptly clanged six shots in succession off of the 10-inch steel plate, timed no more than one second apart. He was pleased and I was shocked!

The distance, near 35 feet, is twice that of a typical Cowboy Action revolver target. It is visibly smaller than most 16-inch Cowboy clangers.

But Ron can precisely align the sights for each successive shot as quickly as most of us can only “poke and hope”, relying on instinct as our guide. “The gun shoots precisely where I look, he proclaimed and the trigger pull is excellent”.

“How much does it cost?” he asked for the second time…

Later that day, Iron Burner (Chuck) and Marshall Kenny Hittum (Keller) checked the weight of the trigger pull. It measured 2.4 pounds on Ron’s RCBS Scale – identical to the trigger on my Ruger Blackhawk tuned by a pistolsmith for Cowboy Action. 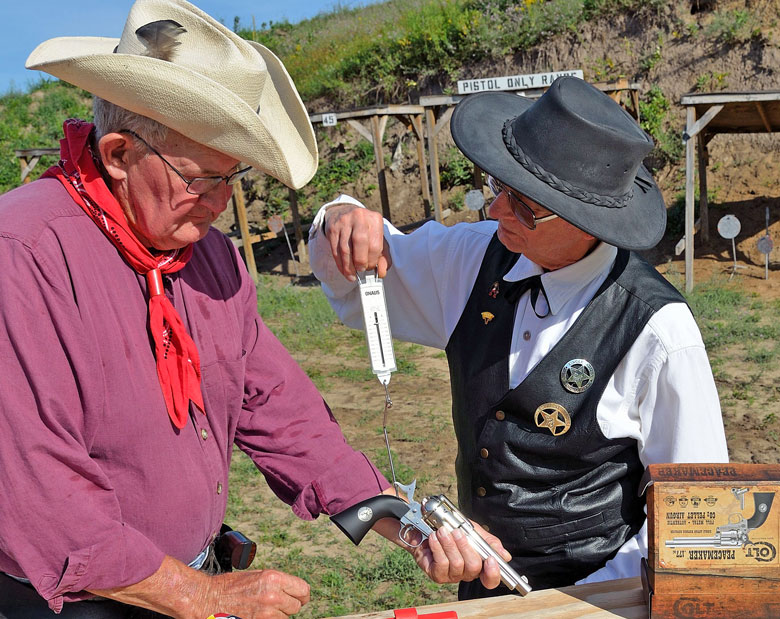 I think any budding Cowboy would be thrilled with the light force required to cock the hammer and the crisp trigger pull characteristics of the Colt. It makes single action shooting effortless.

For anyone contemplating Cowboy Action shooting, we recommend a review of the Single Action Shooting Society’s Handbook available FREE on-line ( sassnet.com ). The three S’s in SASS stand for “Safety, Safety and Safety”! There is some risk in handling any firearm, and risks increase exponentially in a competitive environment. Please read their handbook.

Before we discuss in more detail the SASS Cowboy Action rules, I thought it would be good to check out a few performance characteristics of the gun.

The Colt Peacemaker pellet pistol is not a target gun, so accuracy is not a defining characteristic. But Ron Keller’s experience on the local gun range should assure all of us that the replica Single Action Army will deliver a degree of accuracy far beyond the needs of Cowboys.

Beyond that, I was interested in muzzle velocity under rapid fire conditions.

Guns powered by CO2 typically lose velocity as the gun cools under rapid fire so, we wanted to determine whether that characteristic could have any meaningful impact on Cowboy Action scores with the Colt Peacemaker pellet pistol.

We also wanted to know how many shots could be expected with a single 12 Gram CO2 cartridge. And whether the gun’s trajectory would be flat enough to be effective at reasonable range, given the rudimentary, non-adjustable sighting plane. My Oehler 33 Chronograph gave me some answers to those questions. 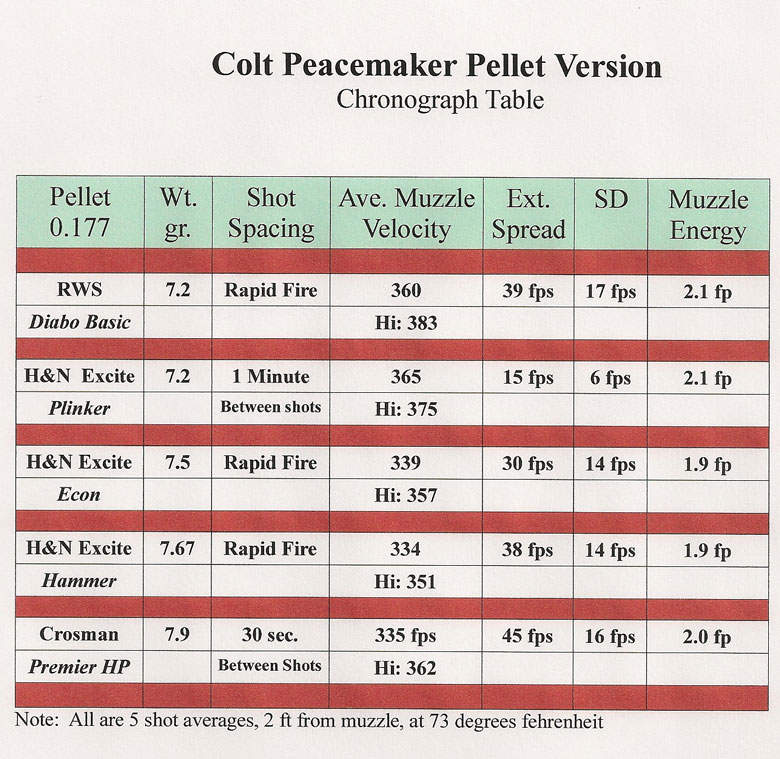 At peak performance, with the right seven grain pellet and shots spaced over a minute, it appears the gun will achieve the manufacturer’s advertised 380 feet per second muzzle velocity. But in practicality, rapid fire five-shot averages ranged between 335 and 360 fps, with an extreme spread of about 35 fps and a Standard Deviation of 15 fps. That’s still good enough for Cowboys.

I did a very primitive accuracy test at 5 yards with all of the pellets except Crosman Premiers, using my standard Cowboy Action two hand, off-hand shooting style. All of the six shot groups were good enough for Cowboy Action, but the Colt Peacemaker pellet pistol clearly favored the H&N Excite Hammer (7.67 Grain) Pellets. You could cover them with a quarter. 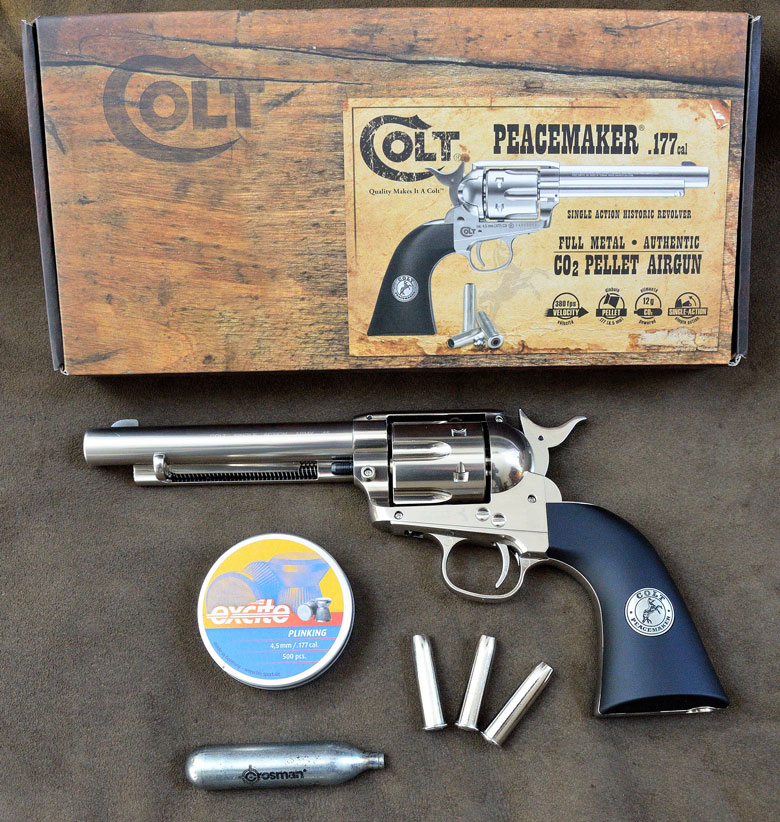 I also tried to determine whether all of the chambered cartridges in the cylinder lined up properly with the forcing cone of the barrel. Improper alignment would deform the pellet and shoot off of the mark. Not to worry, every chamber was capable of perfectly centering the pellet on target at 15 feet!

I later discovered that H&N Excite Econ pellets, at a distance of 12 yards, smashed and stuck to the face of the cast steel plate on the handgun range. If you are wondering whether the rifling in the barrel stabilizes the pellets: it does. Not a single pellet, out of a total of 10, showed any evidence of tumbling.

I’ve included a trajectory chart to give you a flavor for the effective range of the Colt. 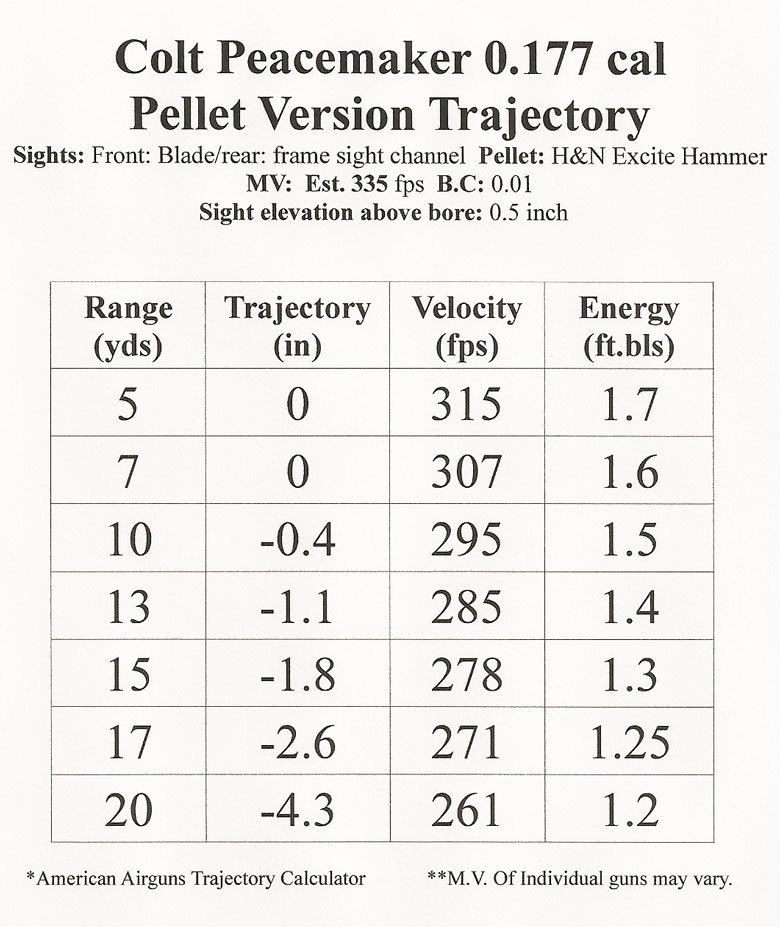 With the Hammer Pellets, it should shoot dead flat out to 20 feet, drop no more than half inch low at 30 feet, and will stay close to an inch of the aim point out to 40 feet. As a practical matter, I see a touch more front blade shooting rapid fire, so the pellets clustered just above my point of aim at 35 feet.

I recommend you buy three tins of seven grain pellets (and get the fourth one free from Pyramyd Air), along with a pack of 40 CO2 cartridges. I also suggest you buy extra six packs of cartridges if there will be more than one shooter sharing the gun.

That way, the Cowpokes in waiting can be reloading their extra cartridges while the primary shooter is fending off the bad guys. It won’t be long until they will all have their own Colts !

Your Colt Peacemaker pellet pistol comes with a safety not original to Samuel Colt’s revolvers. Use it as instructed in the manual. We’ll discuss the reasons for this in Part II of this review.

And a reminder. Due to the realistic appearance of this product, handle it as you would a firearm! Do not display it in public or in any place where it could be mistaken for a cartridge firearm.

Until next time, when we go into more detail about the finer points of Cowboy action…stay safe buckaroos! 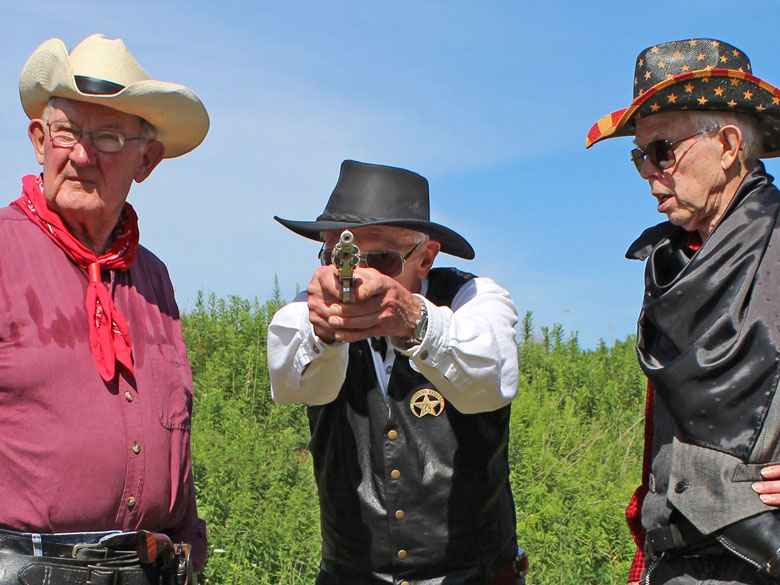