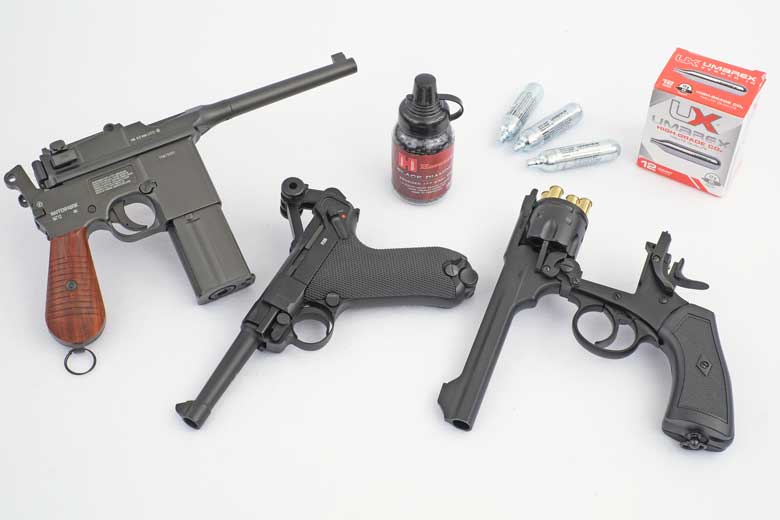 In this post, we look for the best WW1 replica BB pistol. There’s some great choices, we we’ll see!

As many know, CO2-powered, BB-firing actions are an ideal means for creating realistic replica BB pistols. Inevitably the 12 Gram CO2 cartridge is retained in the butt, while the simple, spherical BBs allow for a wide variety of feeding systems.

This compact CO2 power source is cheap and easy to find almost everywhere. Likewise, BBs sell at just a few Bucks for a container of about a Zillion.

So, running costs are low and the guns are very realistic. WW1 replica BB pistol costs are not high either. Why not step back in time and experience shooting as our grandfathers and great-grandfathers would have known it?

In contention for Hard Air Magazine’s best WW1 replica BB pistol are three very different handguns. Each of them is iconic in its own way. All three have great scores in HAM’s industry-leading testing.

In alphabetical order, we have: 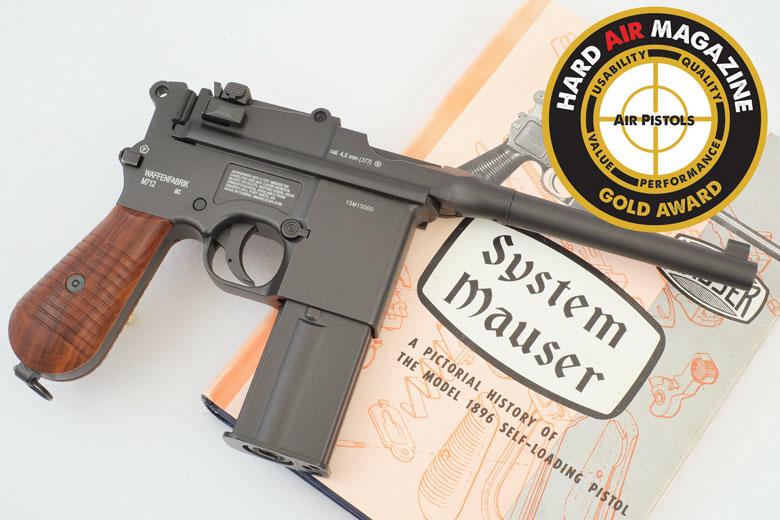 The Umarex Legends family features a wide range of historic replica BB guns. Quality and value are outstanding for just about every model!

The M712 is the Legends BB gun version of the Mauser Broomhandle “Schnellfeuer” pistol. This superbly realistic replica BB pistol version of an iconic firearm gives you both semi-auto and full-auto blowback action.

The Schnellfeuer was not be the most intuitive-pointing pistol ever made, but this has to be the meanest WW1 replica BB pistol of them all. Yes, I know that the Schnellfeuer model was not developed until after the war, but that unique Broomhandle outline is more typical of WW1 than WW2.

At a Street Price of just over $110, it’s great value, but that heavy Broomhandle bolt really eats up CO2 for the blowback action. Just make sure you get plenty of 12 Gram cartridges!

You can read the full HAM review here. 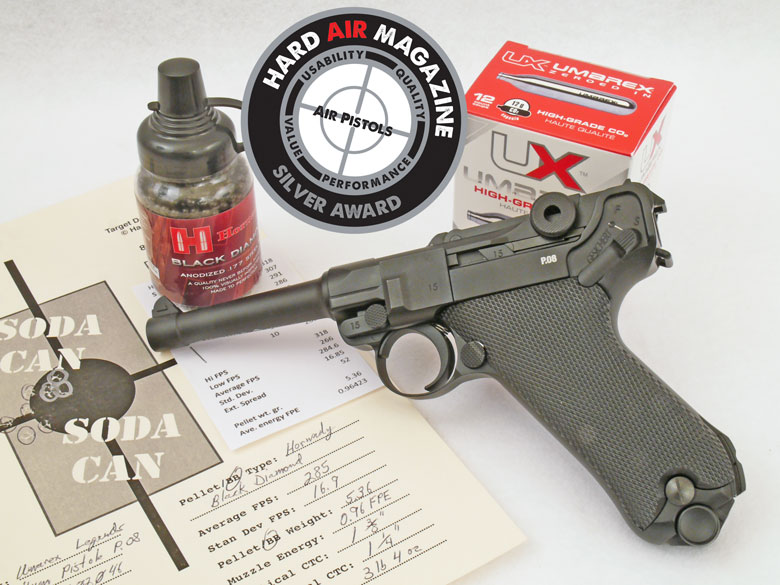 This ultra-realistic replica of the German Luger is an outstanding BB gun! Of course, it’s a very accurate recreation of this famous pistol, even though it has the black plastic pistol grips and markings of a WW2-manufactured specimen. (They should be wood for a WW1 example).

Yes, there are cheaper, non-blowback versions of the P08 available. But HAM recommends that you spend a few bucks more and buy this blowback model if you want experience firing a P08.

The Umarex P08 Blowback pistol is the nearest you’ll come to enjoying a Luger firearm without buying the real thing. In this company, it’s the only one that allows for major field-stripping. The Webley doesn’t require it and good luck to anyone who can reassemble a stripped Broomhandle – whether it’s the firearm or BB gun version. Don’t ask me to do it! 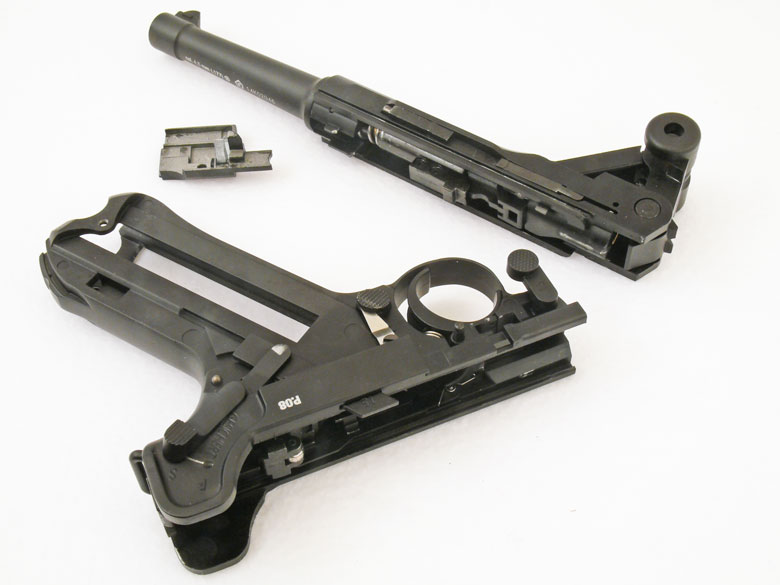 The full HAM review is here. The Street Price is around $110.

The Webley Mark VI CO2 BB revolver is an excellent airgun. If you want a replica of the old British Empire’s best revolver, this is the one!

It’s accurate, powerful and extremely realistic in both looks and operation. The trigger is good and it’s fun to shoot. Shooting is slow compared to the two German models. But instead, savor the satisfaction of loading each cartridge with its individual BB and loading them one-at-a-time.

Then, of course, there’s that super top-break action that makes ejecting the “empties” so much fun! 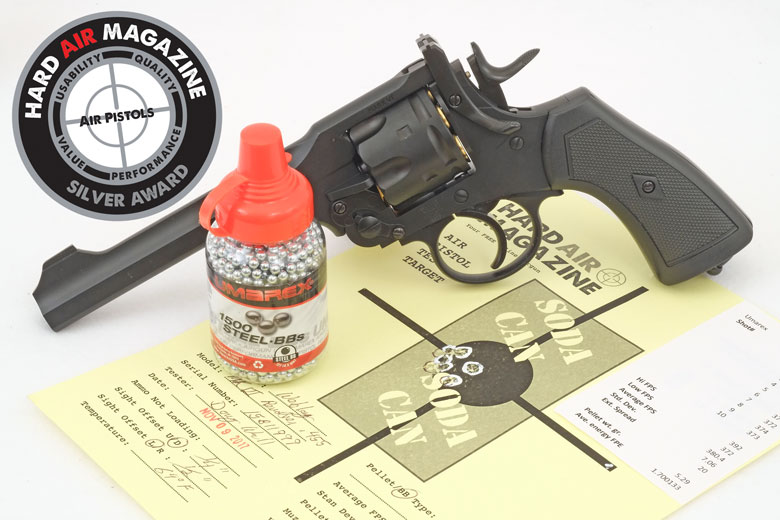 The Street Price is premium-priced at around $150. To find out why it’s worth the money, you’ll want to read the full HAM review.

What’s the best WW1 replica BB pistol for me?

As all of these replica BB guns scored highly in HAM reviews – between 86% and 93%. They all earned HAM Silver or Gold Awards. This means that you can be sure that you’ll be happy with any of these choices.

Probably, most people will make their choice on emotional grounds. They’ll choose the gun that takes their fancy the most. And why not?

But if we’re trying to apply a little logic to such an emotional choice, for full auto fire and mean looks, it has to be the M712 Broomhandle Schnellfeuer.

The P08 Luger replica will be the choice for handling, “pointability” and overall sophistication. Then there’s that unique blowback toggle action to enjoy too with every shot.

Revolver fans will obviously go for the Webley. It’s a great gun and they’ll like the slower pace of individually loading the cartridges, rather than those newfangled semi-auto German designs.

So which one to choose? It depends on what you prefer! Of course, you may prefer all three, that’s OK too… 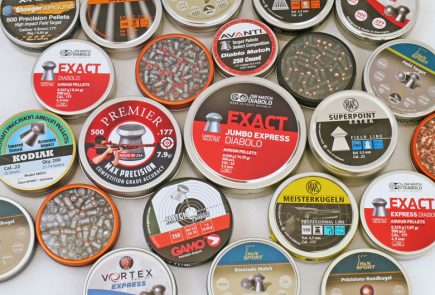