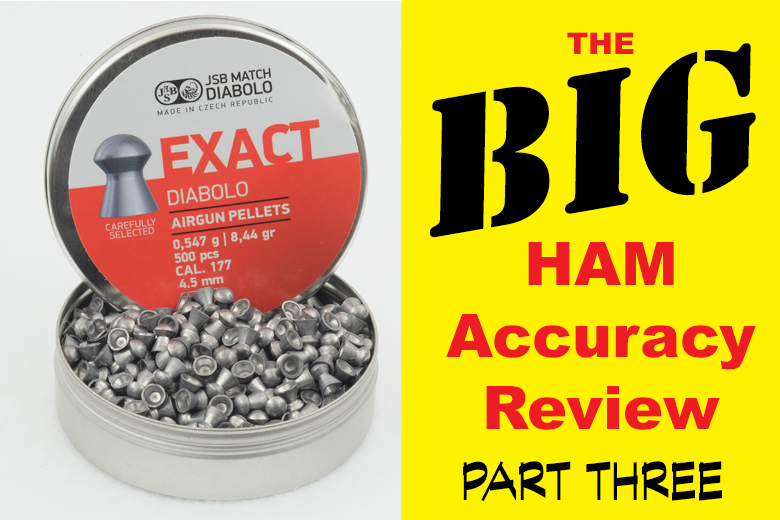 To find the most accurate .177 caliber pellets, we analyzed the results of 43 comprehensive HAM test reviews. Thirteen of these were PCP air rifles. Twenty-four used a Piston operating system.

This gives a good amount of data to base recommendations for both types of power plant. 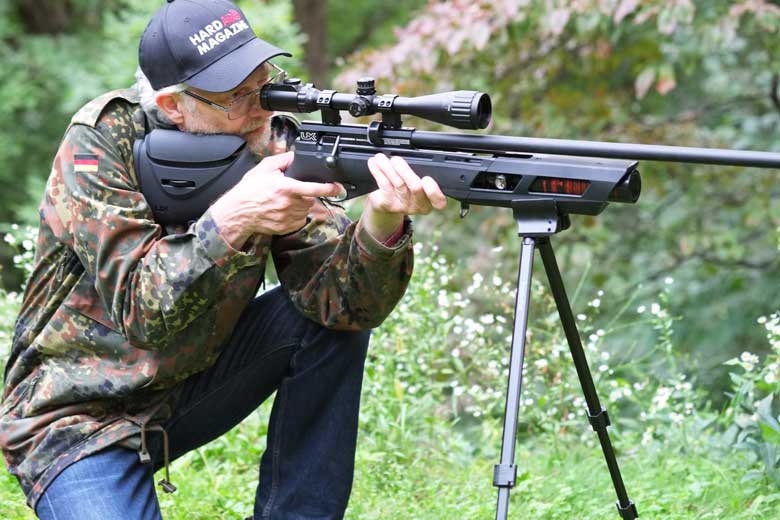 First, let’s look at a summary of the overall results. This covers all types of .177 caliber air rifle reviewed by HAM, including PCP, Piston, CO2 and pump. 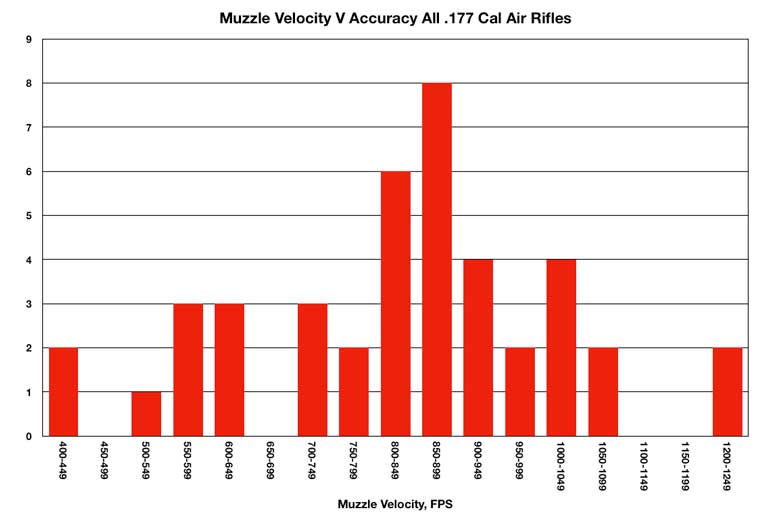 But there’s clearly a definite “sweet spot” of Muzzle Velocity for best accuracy with the .177 cal air rifles tested by HAM. It’s between 800 and 900 FPS. Fourteen of the guns tested fall into this category – that’s nearly 33% of the tested models, a pretty large proportion.

To come to more specific conclusions, let’s break-out the data into PCP and Piston types. There’s not enough HAM data to make valid conclusions for CO2- or pump-powered air rifles, however, so we’ll leave these on one side for now.

Taking the thirteen .177 caliber PCPs tested by HAM, the Muzzle Velocities for best accuracy are fairly evenly scattered between 600 and 1,000 FPS. 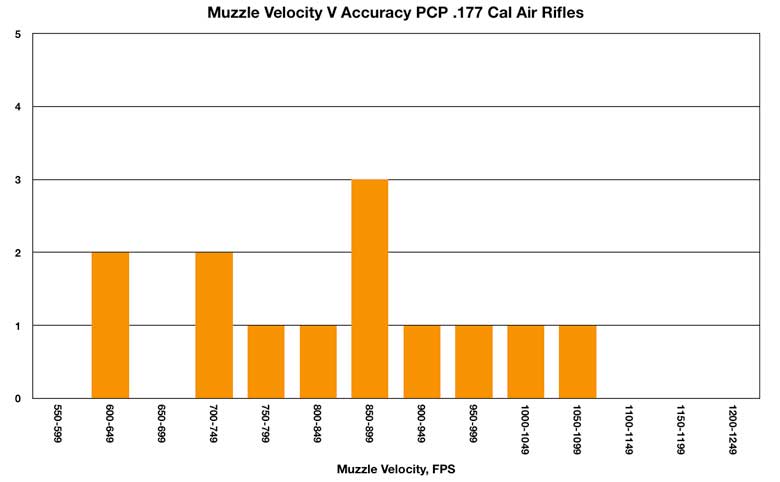 There’s an obvious peak in the chart below at 850 – 900 FPS. But the sample size is probably not large enough to conclude that this is a significant range based on this data alone.

However that peak does become more significant when considered in the light of the “overall” chart, above, which shows these PCP figures as part of the complete .177 caliber accuracy picture.

When we look at the types of most accurate .177 caliber pellets, an interesting picture emerges. 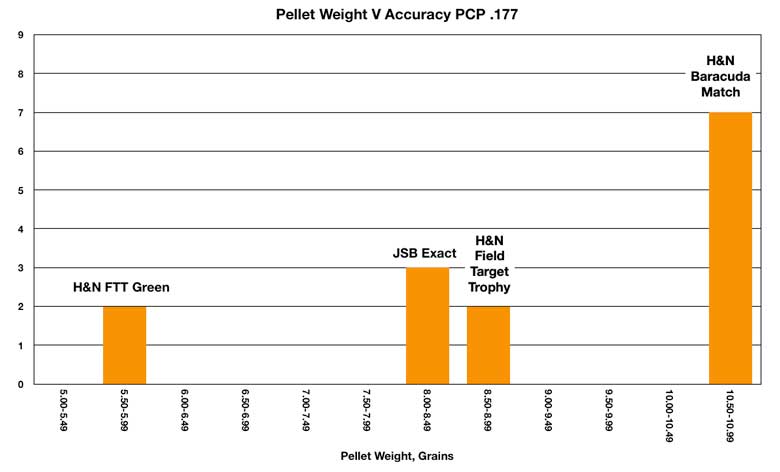 As we can see from the chart above, the .177 caliber PCPs tested by HAM showed a clear preference for the heavy, lead, domed H&N Baracuda Match pellets to achieve best accuracy. Over 50% of the most accurate HAM targets were shot using these pellets. 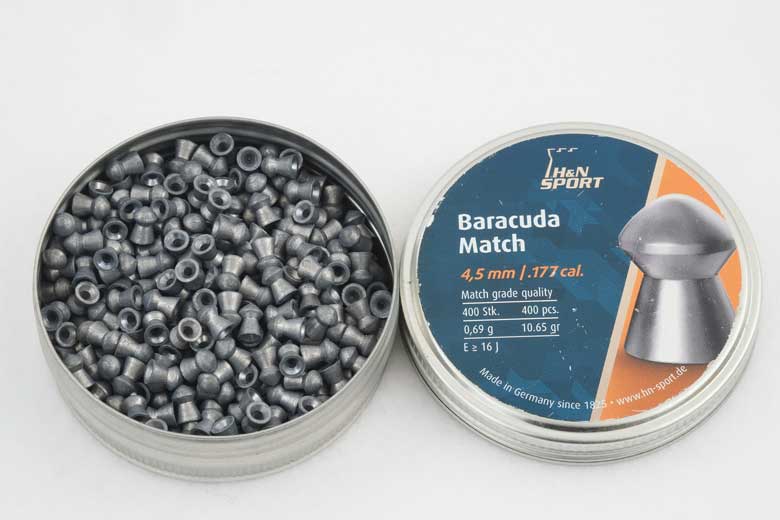 Mid-weight lead domed pellets also did well, as is shown by the grouping of the JSB Exact and H&N Field Target Trophy lead pellets.

Two PCP air rifles performed well with lightweight lead-free pellets. One was the low-powered Air Arms T200 model which shot them at just a Muzzle Velocity of just 630 FPS. The other was the Beeman Chief which produced 1077 FPS.

When looking at the .177 caliber Piston air rifles tested by HAM, we see a somewhat clearer picture due to a larger sample size… 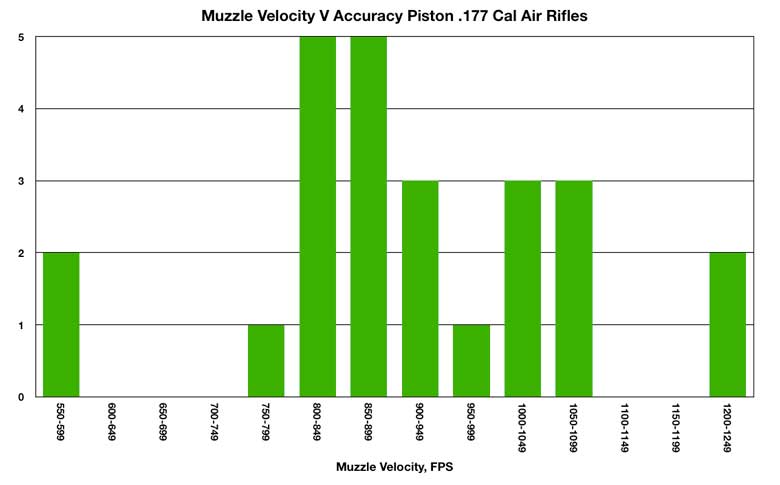 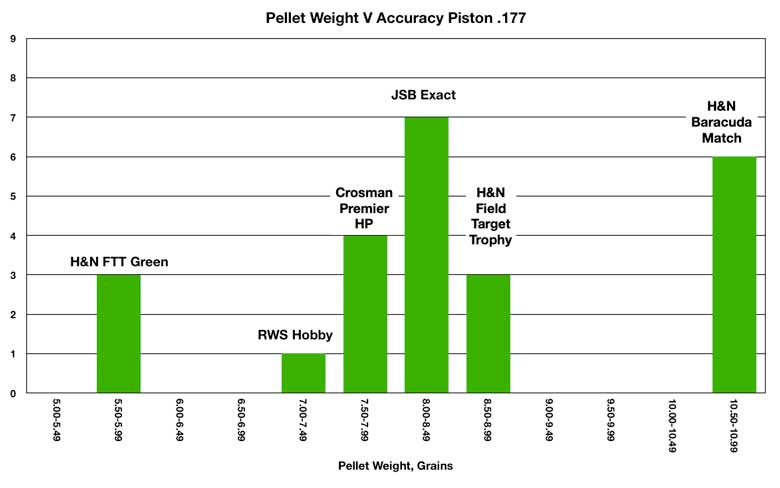 The 8.44 Grain JSB Exact pellet easily achieved the largest number of “most accurate” targets among the .177 caliber Piston air rifles in this survey.

When combined with the similar-weight Field Target Trophy and Crosman Premier pellets, no less than fifteen of the tested air rifles preferred mid-weight lead pellets.

That’s a very significant 60% of the tested air rifles! Hmmm, that could be a clue…

The six results favoring the heavy H&N Baracuda Match pellets averaged 17.37 Ft/Lbs of Muzzle Energy. This compares to the seven JSB-preferring guns where the average Muzzle Energy was 12.56 Ft/Lbs.

If you have a .177 caliber PCP air rifle, domed heavy lead pellets such as the H&N Baracuda Match are clearly the place to start your search for accuracy.

These are also likely to be the most accurate .177 caliber pellets in powerful Piston air rifles.

For medium-power Piston air rifles, mid-weight domed lead pellets such as the 8.44 Grain JSB Exact are clearly likely to produce the best accuracy.

Should you want to shoot lead-free pellets, the H&N Field Target Trophy Greens recorded seven “most accurate” targets. Interestingly, no less than three of these were produced with air rifles manufactured by Beeman in China. They are the Chief, Longhorn and 1051 GP models – one PCP and two Piston guns.

This is a statistically-significant number and makes Beeman air rifles a brand to look out for if you’re planning to shoot with lead-free pellets in .177 caliber. 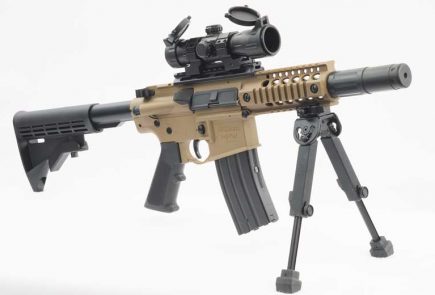