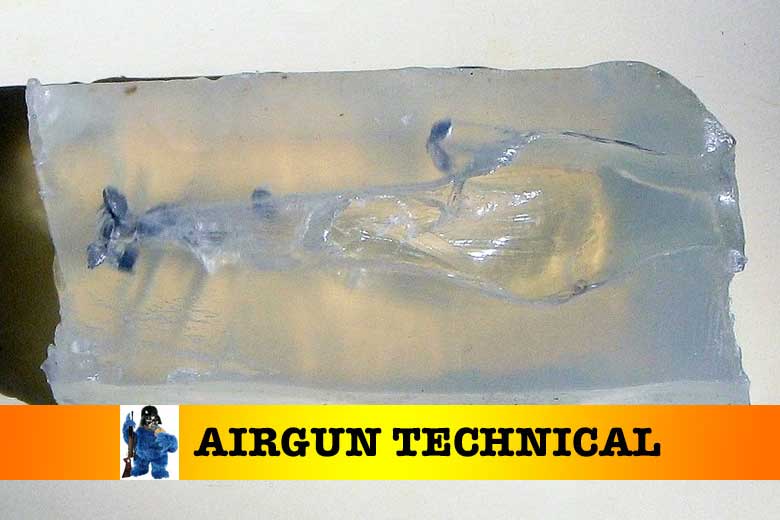 This post on hollowpoint slug design will be the last in Bob Sterne’s regular series. Although he will still contribute to HAM on occasion, and will remain as the HAM Technical Editor, in future, his contributions will be on an “ad hoc” basis.

Personally, I would like to thank Bob for generously sharing his knowledge so freely with HAM readers. He has taught all of us a huge amount!

In the previous article I talked about the differences between pellets and slugs, and showed what a difference Hollowpoint slug design can make to downrange performance on game. In this article, I will show some examples of HP slug performance, and how the size and shape of the HP cavity can affect the expansion.

In the photo below is a block of soap containing .257 cal slugs that were fired into it point blank at 130 FPE of muzzle energy. The solid slugs on the left had already travelled through an identical block of soap, penetrating 9” in addition to what they did in this block. 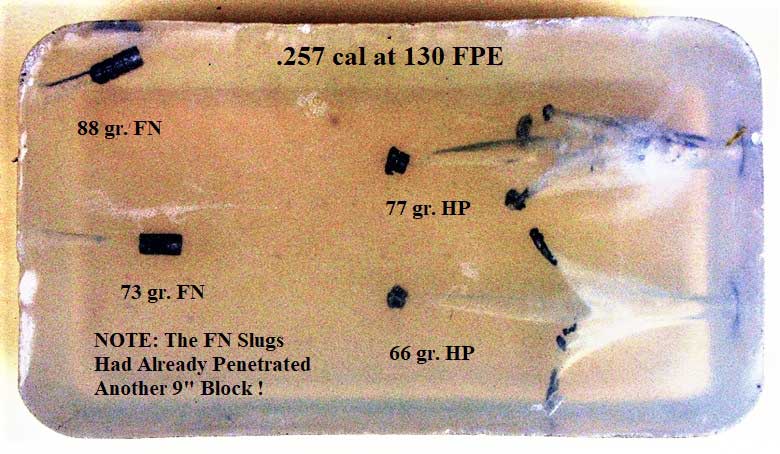 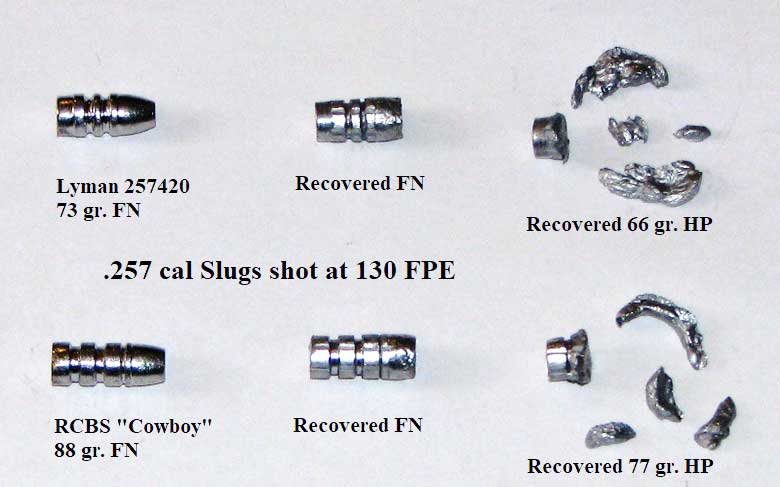 As you can see, the FN slugs expanded to just over bore size, and shortened somewhat while penetrating the blocks of soap. The deep, wide cavities caused the HP versions to come apart, all the way back to the back of the HP cavity, leaving only the base portion with enough mass to continue to penetrate.

The shape and size of the HP cavity is important.

The depth of the HP cavity is key to whether or not the slug stays together during expansion. If the cavity reaches all the way back to the rear of the nose ogive, there is a much greater tendency for the slug to come apart if the velocity is sufficient.

A shallow HP cavity, even if quite large in diameter, will tend to make the slug mushroom but not shed parts of the nose.

Here is a photo showing several versions of my .357 cal Bob’s Boattail. There is the 127 gr. FN version which was the parent, and three different HPs, varying from 119-122 gr. They were cast using different pins inserted into the FN mold, the conversion done by Erik at Hollowpoint Mold Services. 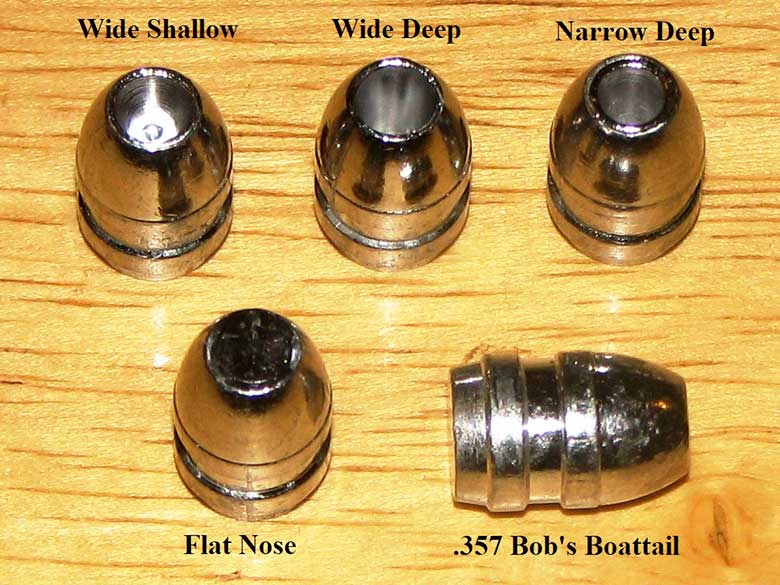 The deep cavities go all the way to the back of the nose ogive, where the first band is located. The shallow cavity is about half that deep.

The next photo shows how the three HPs performed when shot into a block of soap at 183 FPE. 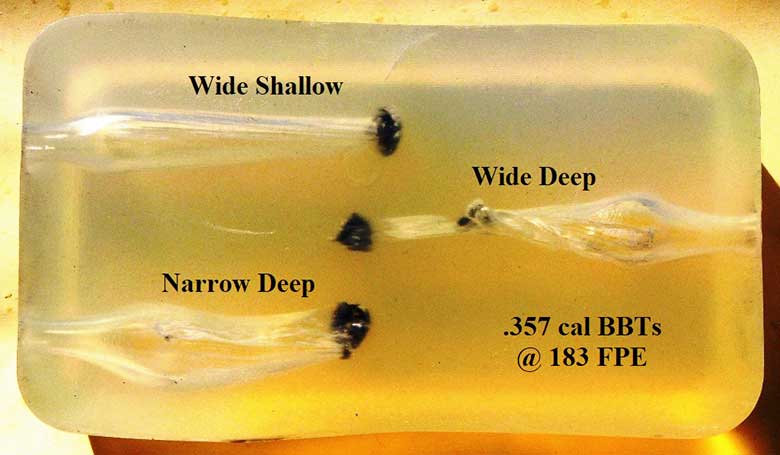 Note that the cavities formed by the different HP designs are quite different. The shallow HP expanded less violently and stayed together. The deep HP slugs had a larger diameter wound channel, because the “petals” of the HP opened up more. Here is the front view of the recovered slugs. 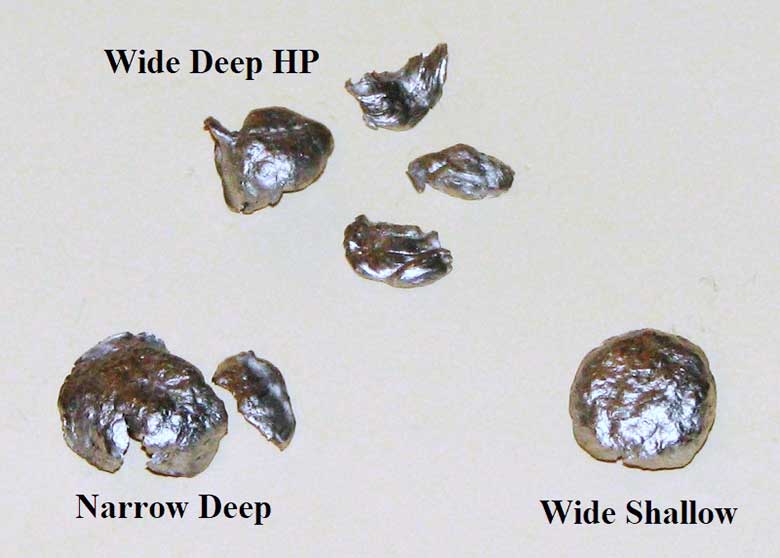 Note that wide, deep HP came completely apart, while the HP with the narrow, deep cavity was just starting to come apart, as it took more energy to “tear” the wider lip around it. Here is the rear view of the same slugs. 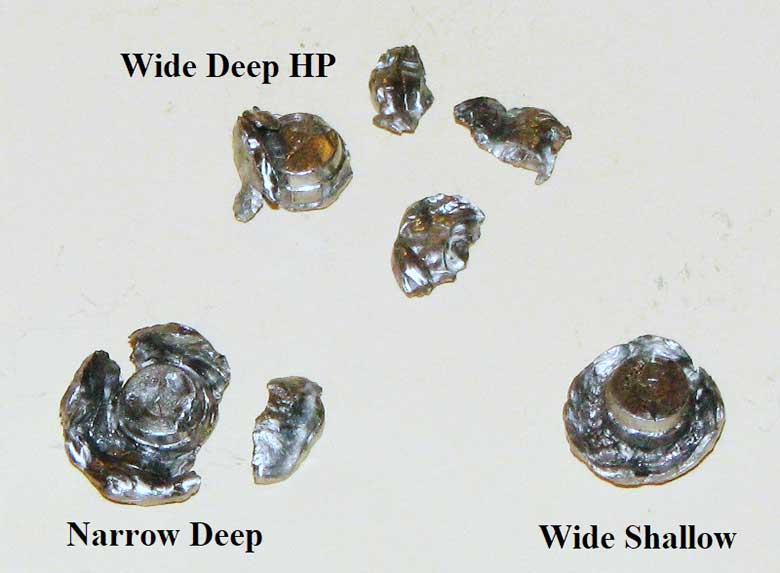 Studying these slugs, and the wound cavities they produce, gives us vital information about how the dimensions of the HP cavity affects the performance, and indeed the suitability of the Hollowpoint slug design for our intended target.

If you are hunting Varmints, where a quick kill is all you care about, and damage to meat is not a consideration, you want a wide, deep hollowpoint. You don’t care if the bullet stays intact, you just want the largest, most destructive wound cavity you can get.

You want to expend as much of the slugs energy as possible inside the pest. In fact, coming apart into small pieces, which have less chance of penetrating through the animal or bird is a good thing, as you are less likely to cause damage behind it.

Recently there have been developed “Fragmenting” slugs for airguns with huge, deep cavities, designed for exactly this purpose.

On the other hand, if you are hunting larger game, such as a deer or hog, your requirements are quite different. You may, in fact, choose a FN slug, which will penetrate much further than a HP, and given sufficient FPE penetrate completely through the animal to result in two holes to provide a greater blood trail and easier tracking.

Ideally on such an animal you would be using a gun with enough power to be able to drive a HP completely through the body. In this case, a shallow HP design, or even a “Cup Point” (a shallow, conical HP cavity), would be an excellent choice.

You want the bullet to stay intact for penetration, while expanding to the largest diameter possible.

I hope that this series of articles has been educational and helpful. At this point, I plan to take a break from writing for a while. If you have any suggestions for another series of interesting topics that I could tackle, please feel free to contact me through Hard Air Magazine or the various Forums. You know where to find me!