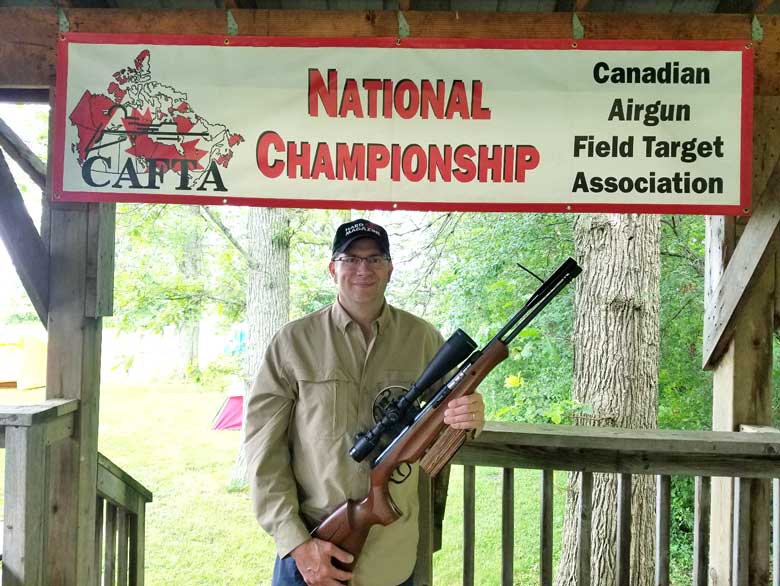 Here’s Eric Brewer’s personal account of attending the 2019 Canadian National Field Target Championship. Thanks to Eric for the great story and photographs!

Last weekend – July 20th and 21st – Sean McDaniel and I went up to the 2019 Canadian National Field Target Championship in Port Colborne, Ontario Canada. Every year this is a great event mainly due to the people who take part!

We headed out at around 4:30 on Friday the 19th up through Niagara Falls and over the Rainbow Bridge border crossing. It only took about an hour and a half to get to the bridge from Sean’s house (which is just a couple of miles from our home range at Rochester Brooks Gun Club in upstate New York).

Below. On the line in order: Zach Harde, George Harde, James Liu, Tim MacSweyn (with his back to us), Joel Goodwin, Someone hiding and Tom Peretti. 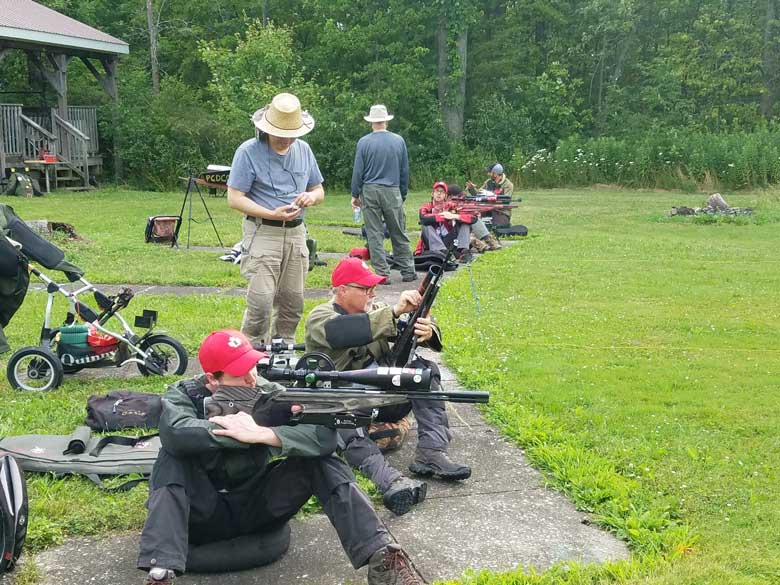 Crossing The Border With Our Airguns

At the border it only took about a half an hour for us to get through registering guns with the Canadian police. All air guns with a muzzle velocity of over 500 FPS are considered a firearm in Canada.

The form needed is simply downloaded from the internet, filled out and brought with you to the border having on it your serial numbers of each gun you have and your personal information. Bring your Passport!

There’s a $25 charge for all the guns you are taking with you across the border, not for each gun.

First our guns were checked with the police verifying that the serial numbers on our paperwork were correct to the gun. We then went inside, had the paperwork registered and paid the $25 fee. The border crossing itself took about 30 minutes.

Arriving At The Club

We arrived at the Port Colborne Conservation Club about 6:30 Friday night and were welcomed by friendly faces that I’ve known as from previous years we’ve gone up there. We dropped off our stuff in the clubhouse and went out to get something to eat.

When we got back to the clubhouse the shooting range was open for us to get our zeros set. Most people came in on Saturday morning.

There was quite a bit of wind on Friday evening so you really couldn’t do much for horizontal hold but at least you could get your verticals. Apparently Tom wasn’t happy that the dark came so quick at 10 at night and he decided to use the car headlights the shine down the range to get his numbers! 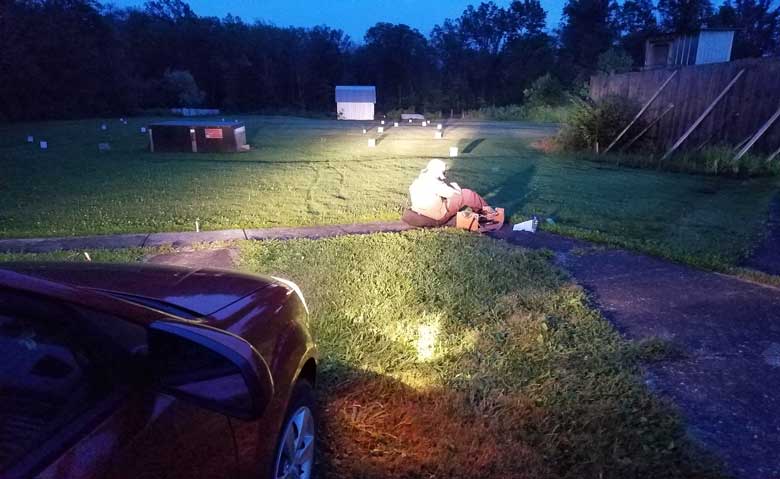 When the range was closed we all had some good conversations and a couple beverages until packing in for the night around 11 PM.

The Canadians shoot their Field Target a little different than the Americans. Their set up is three targets per lane at 10 lanes. You shoot the first five lanes and have a mandatory 15-minute break, then go back and shoot the remainder of the five lanes.

For Hunter division you are not allowed to use the parallax numbers on your scope for distance so you have to cover them up. You have to judge the distance to each target by eye in each lane. There’s also no bipod, you can use a monopod only.

They have the WFTF positions which are just like around the world. They also have an open division that allows you to use bipod your parallax numbers for distance and straps as well as a range finder.

Below. Joel Goodwin shooting his custom TX200 that he is going to be shooting at the worlds, again. Great shooter and a great guy! 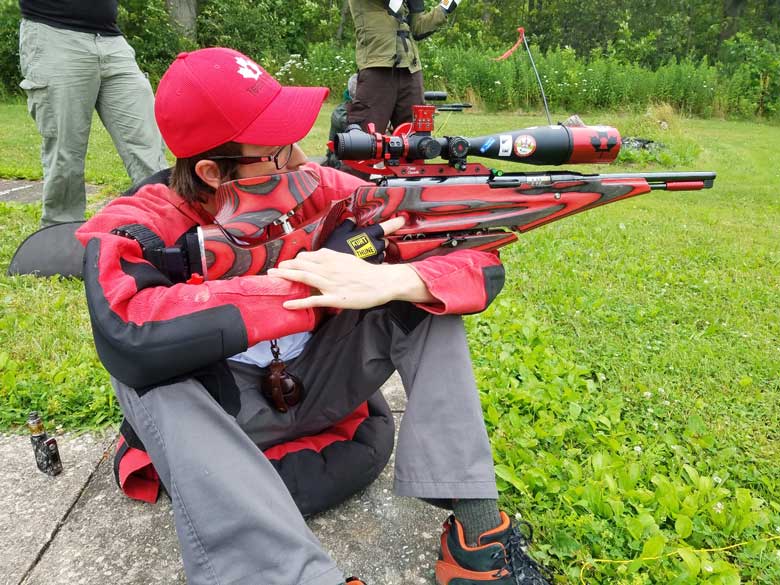 Shawn shot well in the Open division, while I shot in Hunter division.

Not remembering how I had done it in past years, I had to get used to a monopod. My scores from the first day show I wasn’t successful in figuring it out initially.

Hunter division also scores a little differently than the US. They score one point for a faceplate hit and two points for a knockdown. Each day’s total to be a maximum of 120 points.

Below. Zach Harde getting his zero on Saturday morning. 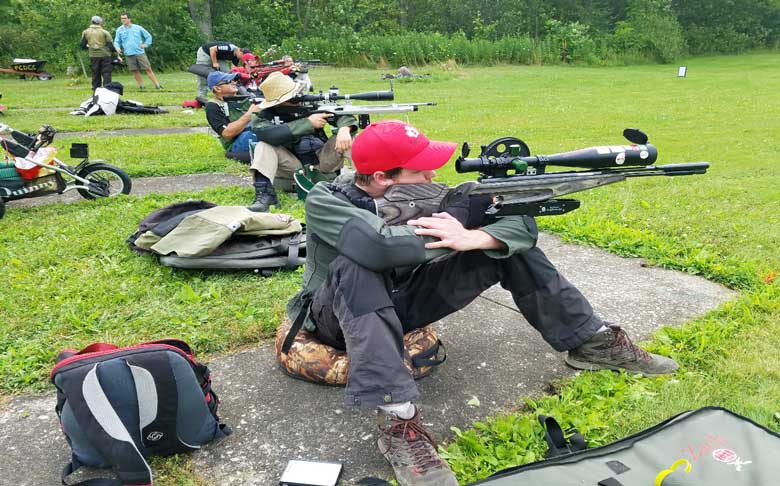 The course was laid out like we do in the states except the match director doesn’t do it. A selection of shooters are picked and each one uses their own targets to set up two lanes each.

That way no one person knows all the lanes and this allow everyone to shoot including Tom the match director.

But there are similarities in the US is the amount of mosquitoes and mud they had up there that you had to trek through. Some things always stay the same!