How Important Is Extreme Spread To Accuracy? 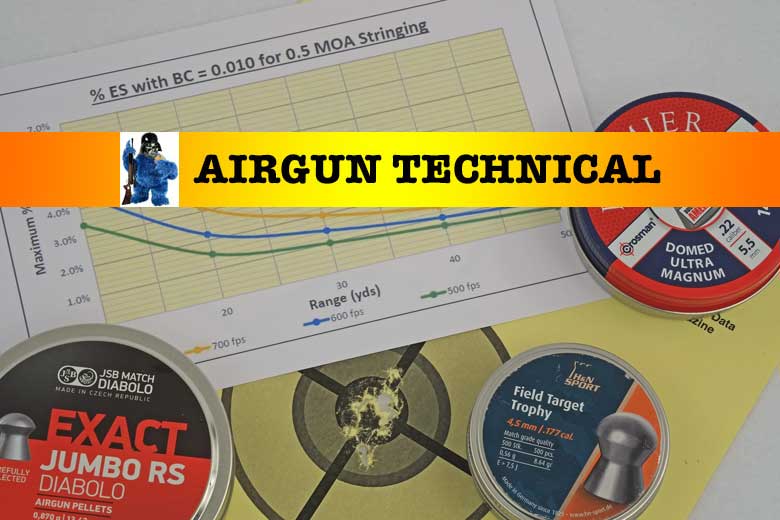 Extreme Spread is the difference between the fastest and slowest shots in a string. We know from HAM test reviews that it varies by pellet and by gun.

But how important is Extreme Spread to accuracy? In this post HAM Technical Editor Bob Sterne explains…

In the last few articles I have talked about various things that can affect the flight of a pellet between the muzzle and the target. Now I would like to try and quantify how much difference those various factors make in how likely you are to hit your target…. or miss it!

One of the factors that you have some control over, through tuning, is the consistency of the velocity from shot to shot, or within a string of shots.

If you chronograph a series of shots, most chronys will tell you the Extreme Spread (ES). I divide that number by the average Muzzle Velocity, to get a percentage ES, and we can use that to get an idea of how much difference that might make at the target.

Percent Extreme Spread and What it Means

The lower the velocity, and the longer the range, the longer it takes for the pellet to reach the target. Therefore, a small variation in velocity will make a bigger difference in the Point of Impact (POI), with faster shots hitting higher and slower shots hitting lower. This is called vertical dispersion, or stringing.

The higher the velocity, and the higher the Ballistics Coefficient (BC), the less critical the ES is. Most of us would be happy if we could shoot groups of 1 MOA, but few of us can do that consistently. Completely consistent velocity (a 0% ES) is not necessary, and so we need to come up with a level of ES that makes no difference to our shooting.

It would seem reasonable to accept a vertical dispersion of 0.5 MOA as being completely lost within the group size, and therefore 100% acceptable. Remember, we are talking total MOA spread here. The actual possible “miss” distance is half that, only ¼” high or low at 100 yards, compared to the group center.

The charts below are based on 0.5 MOA vertical stringing being virtually invisible to even an above average shooter. Let us first look at a typical round nosed pellet which might be used for moderate to long range shooting, which has a BC of 0.030: 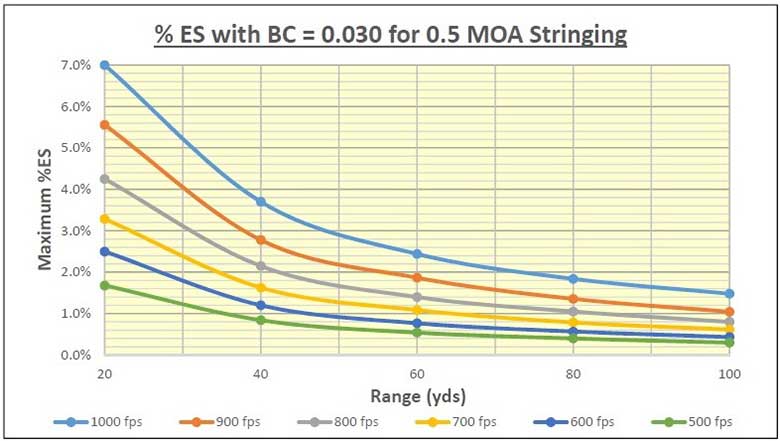 What happens if you are shooting a wadcutter, with a lower BC, at a lower velocity? Check out this chart for a BC of only 0.010: 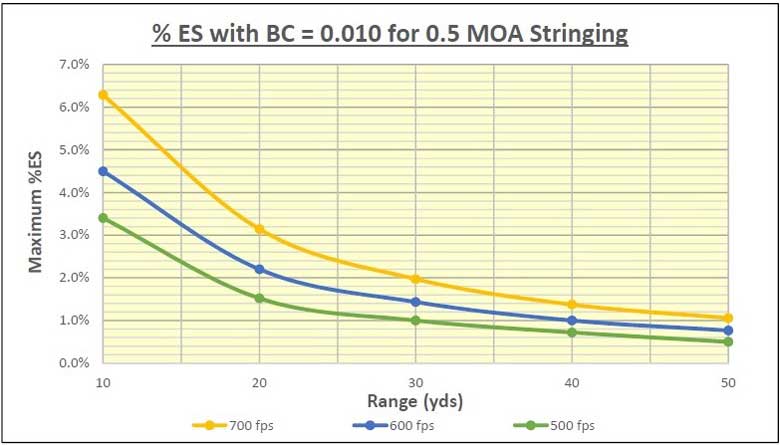 With pellets that slow down faster, and starting out at a lower MV, the ES becomes more important. At 30 yards, at 500 fps, a 1% ES will cause about a 0.5 MOA vertical deflection. Increasing the velocity to 700 fps means you can double the ES to 2% and still not see the effect. 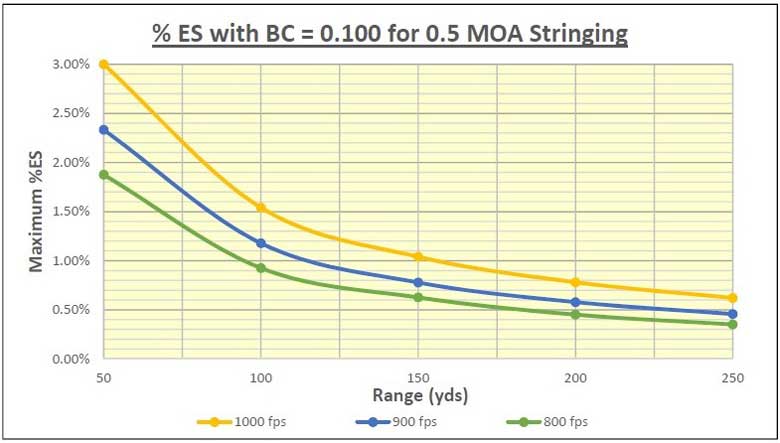 You will note that at 900 fps a 1% ES will be unimportant well past 100 yards. There is something else to consider here, to confirm the idea that we don’t need to obsess about the ES.

The very best .22LR target ammunition (with a muzzle velocity of about 1050 FPS) has an ES of 2-2.5% over a box of 50 shells. You would think that since we can easily do better than that with a regulated PCP (they can have an ES of under 1%), you would be able to see that ES when shooting a .22 rimfire at 100 yards.

The fact that we can’t, confirms the idea that a 0.5 MOA vertical dispersion is lost within our actual group sizes.

The Importance of Other Factors

So, velocity is the prime factor in determining the projectile’s trajectory. But there is another factor besides the trajectory in determining if you hit your target, shoot over the top, or hit low. That is the distance to the target, and how close you are in estimating that. You may know the trajectory of your pellet, but what happens if you miss estimating the range by just a small amount, say 2% (2 yards at 100 yards)?

What about the effect of wind? Let’s say we allow for the wind, but guess the wind speed wrong by only 2 mph? Lastly, how about if we are using good pellets, but our ES is 4% instead of smaller as we might like? Here is a chart showing how these factors can cause a miss at various ranges.

The green line is for a 1 MOA margin of error, and the chart is generic, for a “typical” pellet and velocity: 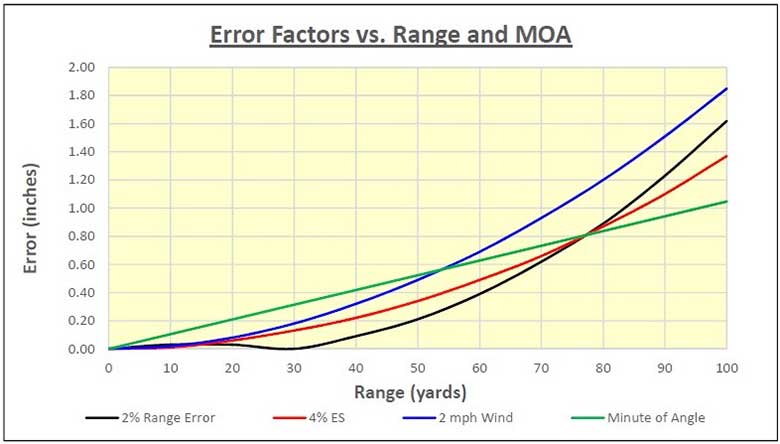 It should come as no surprise to you that the biggest cause of missing your target is the wind (the blue line). If you estimate the windspeed incorrectly by only 2 mph, you will miss your target by over 1 MOA at 55 yards and beyond. That is a ½ Inch error at 50 yards, from misreading the wind by just 2 mph!

What about that 4% ES you have? Look at the red line above. It turns out to be less important than a 2 mph wind, but could cause a miss of 1 MOA (3/4 Inch) at about 75 yards. Tighten up the ES a bit and it becomes even less important.

Now, what about that error in ranging (the black line)? Let’s say the gun is sighted in at 30 yards. Out to 50 yards or so, making a mistake in the estimated range of 2% (which is only 1 yard at 50 yards) won’t make any real difference.

However, past 80 yards, it becomes more important than the 4% ES you were worried about! By the time you get out to 100 yards, just a 2 yard error in ranging is about a 1.6” error high or low in the POI.

By now you should be understanding that the biggest errors in shooting at longer ranges are human error. Estimating the wind or the distance to target incorrectly are the most likely cause for a miss.

Let’s cut the errors in half…

You make only a 1 mph mistake in the wind velocity, or a 1% goof in the range (1 yard at 100). The generic chart below shows what you can expect to happen: 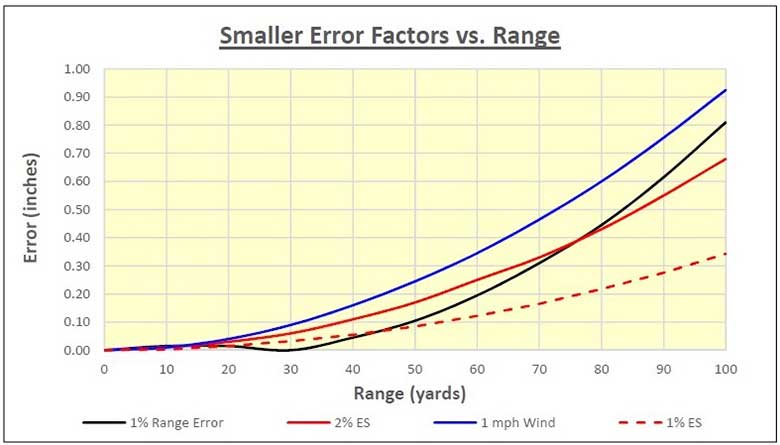 The wind is still the biggest factor. Even with good pellets, at the optimum velocity of about 900 FPS, misreading the wind by just 1 mph. will cause about a 1 Inch miss at 100 yards. Incorrectly estimating the range by just a single yard is almost as bad, causing a miss of over ¾ Inch at that distance.

Both of these are more important than a 2% ES (the solid red line). Trying to reduce the ES to 1% (the dotted red line) is simply not worth the trouble, compared to the other error factors.

The conclusion is – don’t obsess about the Extreme Spread. I strive for a 4% ES for shooting within 50 yards, and a 2% ES for 100 yard work. I’m simply not a good enough shot to take advantage of anything smaller than that! 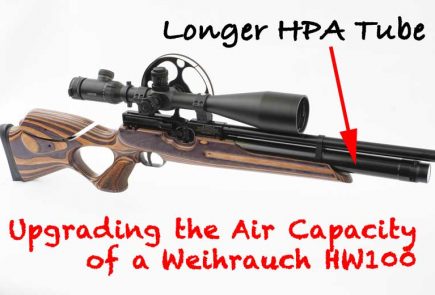