How To Obtain The Maximum Power from a PCP Air Rifle 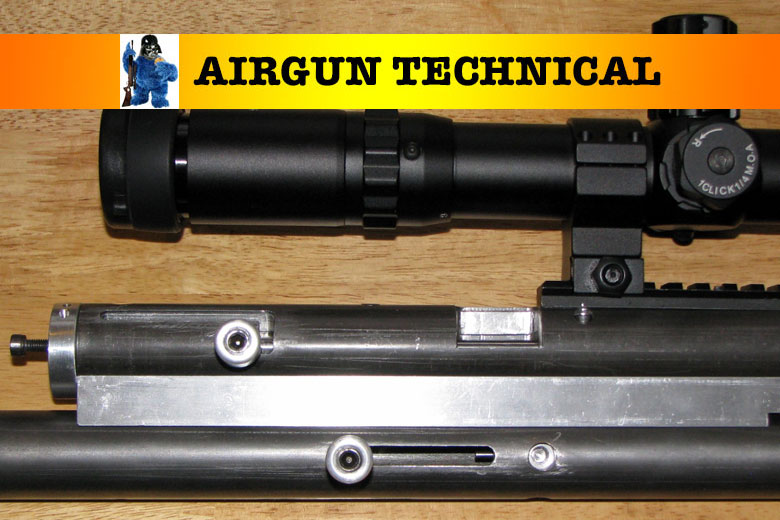 This time, we’ll discuss how to obtain the maximum power from a PCP air rifle, together with factors that limit that power.

In my previous article, I explained the basic operation of a Pre-Charged Pneumatic airgun (PCP).

As you’ll remember, High Pressure Air is stored in a reservoir, and a small, carefully controlled amount is released with every shot. The expanding air acts on the base of the pellet (or bullet) creating a force F. This accelerates the pellet until it reaches the muzzle.

Calculating The Maximum Power From A PCP Air Rifle

The barrel length L is the distance that force acts through. The product of the force times the distance, minus all the losses (and there are many), produces energy E in the pellet.

In Imperial units, with the force F (in pounds) and the barrel length L (in feet), the energy E would be in Foot/Pounds, which we commonly abbreviate as FPE.

The force, in turn, is the pressure P (in psi) pushing on the pellet multiplied by the base area A. That area is of the square of the caliber C (in inches) multiplied by Pi/4. (Where Pi is 22/7 or approximately 3.141592).

Here are the formulae used to calculate the maximum power from a PCP air rifle with no losses:

Sorry for the math, but a general understanding of what is happening inside a PCP is necessary to arrive at our destination of understanding the maximum power from a PCP air rifle.

Note that the energy calculated above is a theoretical number, which can never be achieved in practice. It would require a reservoir of infinite volume (to maintain constant pressure during the shot) and no frictional or other losses. Also the valve would need to be open until the pellet exits the muzzle.

Houston, We Have a Problem!

There are many losses inside a PCP, however. Some of these are listed below, roughly in order of importance:

In addition, most of the time we intentionally close the valve long before the pellet reaches the muzzle, or use restrictive ports, in order to conserve air.

These are not a “loss” in obtaining the maximum power from a PCP air rifle. They are an intended effect used for tuning. They reduce the potential FPE produced, while increasing the efficiency.

Looking At The Losses

Let’s look at the above losses, one at a time, to see their effect on obtaining the maximum power from a PCP air rifle.

If the reservoir is infinite in volume, and the valve is open until the pellet leaves the muzzle, and the ports allow maximum flow, in theory the pressure behind the pellet is constant. In practice that is never the case.

As the pellet travels along the bore, the total volume (reservoir plus barrel) increases, and the pressure drops. This reduces the force available as the pellet moves towards the muzzle, reducing the FPE that can be obtained.

Too small a plenum (volume between the regulator and valve) is very detrimental to the potential FPE of a regulated PCP. It is the most common reason for not reaching the FPE you expected when installing a regulator.

For example, if the plenum volume equals the barrel volume, the pressure drop in a maximum power “dump shot” (valve open until the pellet exits the muzzle) will be 50%, as in the diagram below.

You may think air doesn’t weigh much, compared to lead, but at high pressures, air has a surprising amount of mass. Air at 3000 psi weighs 60 grains per cu.in. The air in a .22 caliber barrel that is 24 inches long weighs nearly 55 gr.

Some of that air is traveling the same velocity as the pellet, and that air takes energy to accelerate. That energy is therefore not available to accelerate the pellet. The heavier the pellet, the less percentage is lost to the air, which is why heavy pellets can produce more FPE.

Helium has about 1/7th the mass of air, which is why you can get more FPE by using it.

There is nothing we can do about loss #3. Air cools when it expands and the pressure drops.

Pellet friction in the bore has to do with pellet fit, and largely explains why two pellets of the same weight may end up with different velocities. Tight pellets have more friction, and waste more FPE. A fit tight enough to seal properly is required of course, so the air doesn’t blow past.

The starting friction is more of an issue with bullets, and whether or not they, the chamber and barrel leade, are of the proper dimensions. Too large a bullet may even get stuck in the chamber.

The longer (and larger) the porting system, the greater the volume: so the greater the expansion before the air gets to the pellet. This reduces the initial pressure pulse, necessary to get the pellet moving to overcome loss #5.

Large ports can produce more power, but large, wasted volumes should be avoided by keeping the porting all the same area from valve to pellet, and keeping the ports as short as possible.

Here is an example of how the port volume reduces the pressure in the barrel. The port volume is represented by the space between the valve and pellet.

OK, so now we know there are lots of losses in our PCPs that prevent us from getting even close to the theoretical maximum power from a PCP air rifle. But how bad is it?

My “Lofty Goal” For Maximum Power From A PCP Air Rifle

Well, even the best custom PCPs have trouble reaching even 50% of the theoretical maximum power from a PCP air rifle for a single, maximum power shot, when using air. This has led me to develop a formula for what I call my “lofty goal” for PCPs.

Since we usually measure barrel length in inches, I divide by 12 to convert inches to feet, and then by 2 to incorporate the 50% losses, producing the following formula:

If they were filled with air to the same pressure, both would contain the same potential energy.

If you can harness 50% of that energy, you have done a superb job in designing and building your PCP!

There are a few “qualifiers” regarding the above.

First of all, I must admit to never quite achieving my “lofty goal” when using a bullet traveling at 950 fps or above, which is usually my target velocity. I can get to about 90% of my goal, for a single shot at maximum power, and other skilled builders have had similar results.

A few have approached my “lofty FPE goal”, or even surpassed it, but to my knowledge (so far) only with heavier bullets (at a lower velocity), which can extract a few extra FPE because they are heavier relative to the air driving them.

Secondly, if you use Helium, which is much lighter, and hence absorbs less energy in being accelerated, you can easily exceed the 50% level, possibly obtaining as much as 70% of the theoretical maximum FPE.

In my next article I will be addressing some of the individual factors affecting PCP performance.