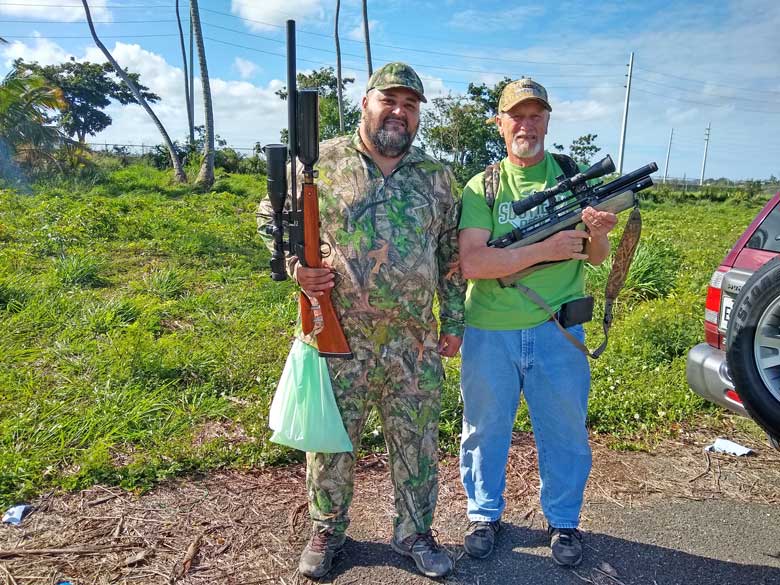 In February of 2019 I made a trip to Puerto Rico to compete in their Field Target Grand Prix. I also went iguana hunting while staying with my good friend and my brother Manolo Gonzalez. That was 11 great days that I spent there with him and his family! 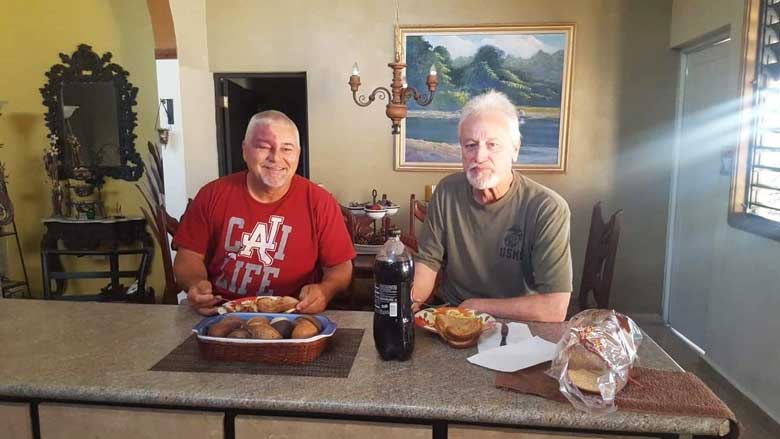 Before the match, Manolo showed me the sights of his beautiful city of Isabella and of Aguadilla. Azure waters, brightly painted homes, and wonderful tropical plant and tree life.

Among the trees and houses you can’t help but notice the large green and orange iguana lizards. They are everywhere! He told me that they hunt them to control the populations and for food.

In my younger life I used to own Penn Reptiles in Delaware County Pennsylvania, Just outside of Philadelphia. I wholesaled reptiles I imported to the pet industry. So, I would have a hard time shooting a reptile. 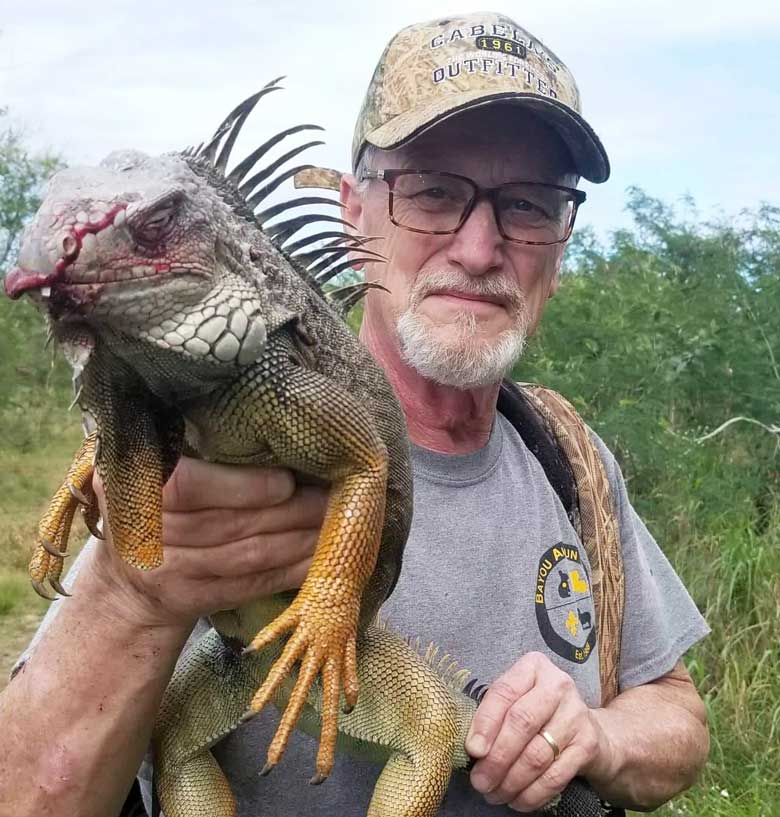 The green iguana is not native to the island. It was released from people who bought them as pets in the 1950s and 60s. They thrived in the tropical environment that mimicked their natural habitat in Central and South America.

Iguana destroy farmers’ crops like watermelon, and vegetables, as well as the fruit trees in the orchards ands in the people’s back yards. They burrow to lay the eggs and collapse roads. I could go on and on!

These are not the cute little dark green lizards you see in the pet stores. Those are the hatchlings and juveniles. These iguanas grow to over 5 and 6 feet long.

At 15-20 pounds, they are aggressive when cornered and can inflect a very bad bite. They whip their tail with speed, putting a welt through pants, with their serrated dorsal scales. Not to mention the long claws on the feet! They can seriously scratch skin and cause infections.

So, on day two of the visit, Manolo handed me a Taipan Mutant in .22 caliber. We were going iguana hunting! 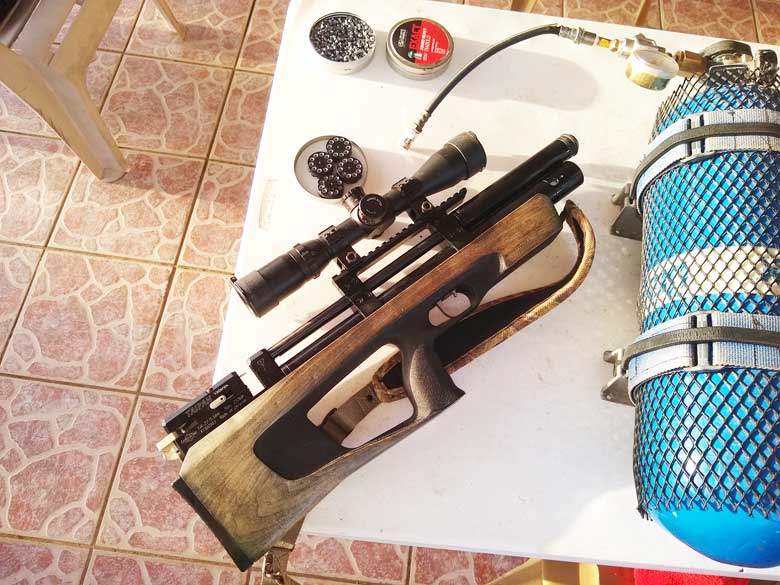 Manolo told me that head shots and body shot don’t drop them right away. You need to hit the neck behind the head. I imagine it severs the spinal cord and insures a quick demise.

We hunted iguana on his property behind his home. We took backpacks with water, and spare magazines. We spotted – or should I say Manolo spotted – iguanas right away, as we entered the area with trees.

I had a difficult time seeing them. They sun on the high branches of the trees, and you mostly see them in silhouette, or just the tail hanging down over the branch. 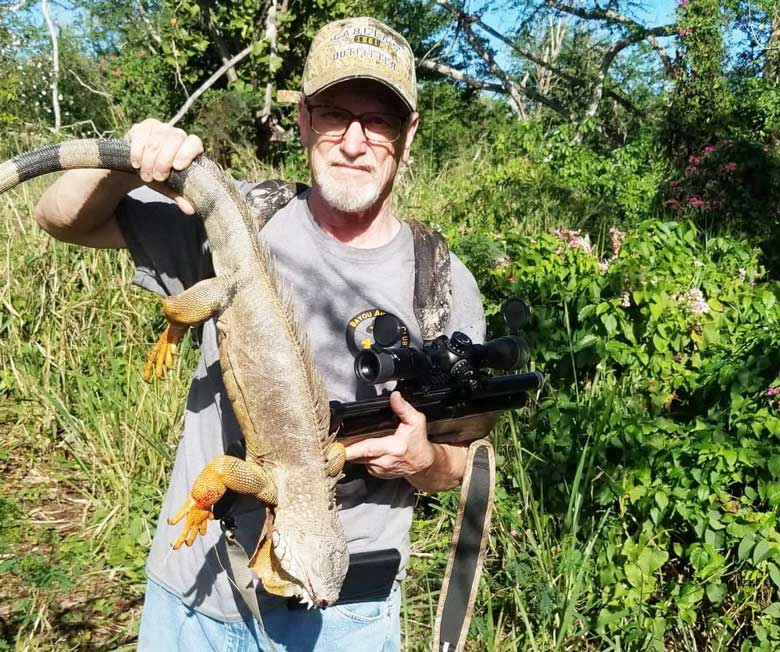 The shots were mostly from around 50-60 yards and up. If you approached one that was lower in the branches, it would fly down the tree with astonishing speed, and crash loudly through the brush unnerving you.

It was amazing how many iguanas there were! The big adults get an orange color to their scales around the neck and chest. These are the mature males and are quite imposing.

I did get a scratch from one smaller iguana that was not totally gone when I picked it up.

Let me tell you that from handling literally hundreds of iguanas in my business, I did not expect the strength of this med sized lizard. I had my own 5-footer in my collection. This medium sized one was incredibly strong!

After I grabbed by by the neck and tail base to avoid the claws, I had a tough time keeping it in control.

As I was bringing it out to show to Manolo, I tripped on the forest debris. When I did, the iguana managed to throw a claw onto my wrist putting a large scratch on me.

Thankfully my tough hide did not get any infection.

After the Grand Prix, Which Manolo took first and I took second in open class, he called a friend who is the Iguana Hunter of Puerto Rico. Jose Jimenez. Jose has been featured by National Geographic on his work.

Jose took us iguana hunting on another property of Manolo’s. He spotted iguanas where we missed them…

After the hunt Jose showed me why they are so hard to eradicate on the island. He pulled the eggs from one of the females that you see in the photos. Dozens of eggs! 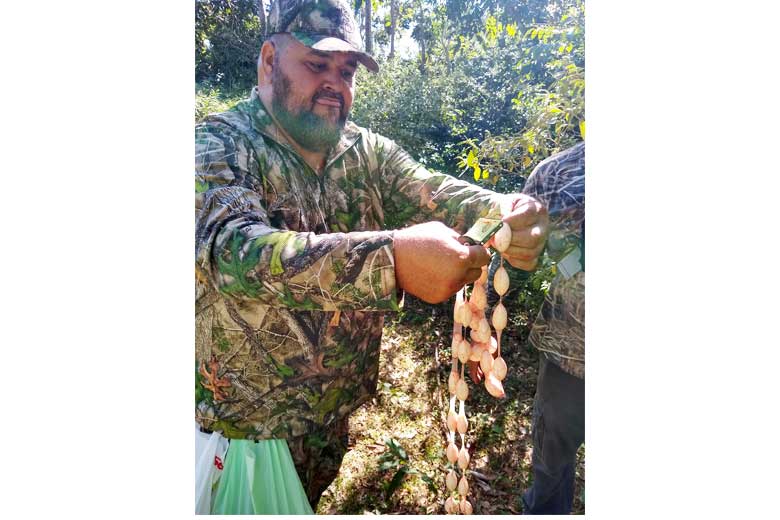 When we got back to the house, Jose skinned the iguana parts to be grilled for lunch. He only uses the legs and the tail base, as there is little meat on the rest of the body. We sat down for a Iguana meal right off the grill. 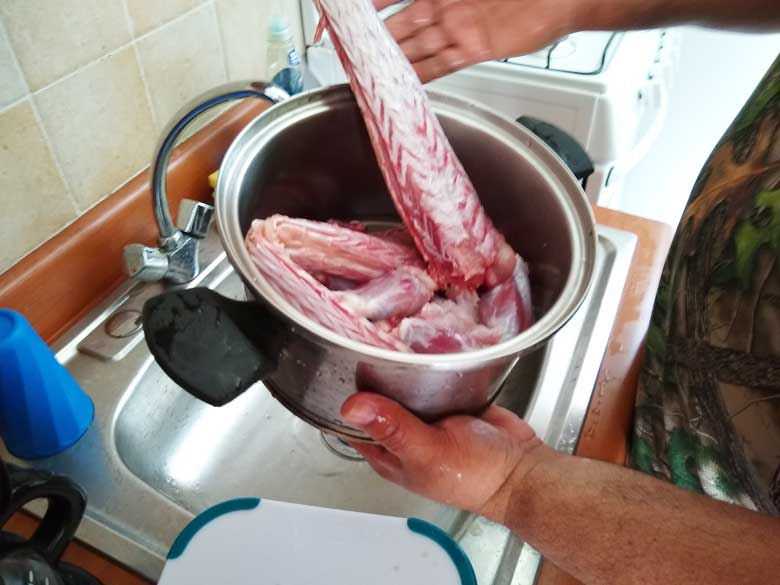 Manolo cooked a breadfruit he plucked off a tree in his back yard. Breadfruit tastes like eggplant. It was a great meal and a great experience!

You can see Jose and watch the National Geographic film featuring him on his FaceBook page – los iguaneros de aguada p.r.

By the way, iguana does not taste like chicken! It is close but has a different taste. it is a pleasant light meat that can be stewed, fried, or baked. Slow cooking yields the best tender fare.

There are many guides and services for iguana hunting in Puerto Rico. The locals can hunt on their property or a friend’s. If you visit, you must use a guide service. They will supply the air rifle or you can bring your own.

However, don’t bring a firearm! It is not legal to hunt them with firearms as far as I am aware.

I can say that Puerto Rico is a gorgeous destination for a vacation. The tropical island setting, beautiful historic sites and and having dinner on the beachfront at the local restaurants make for a memorable time.

Paul Porch is the owner of Paul’s Custom Metal Targets. He makes beautiful custom field targets. Check out his web site here. And read his outstanding post on compensating for riflescope temperature shift in field target competition, too!

Axeon NightVue – A New Tool For The Nighttime Airgun Hunter