Our Most Popular Replica Airgun Reviews – SIG Takes Four Out Of Ten! 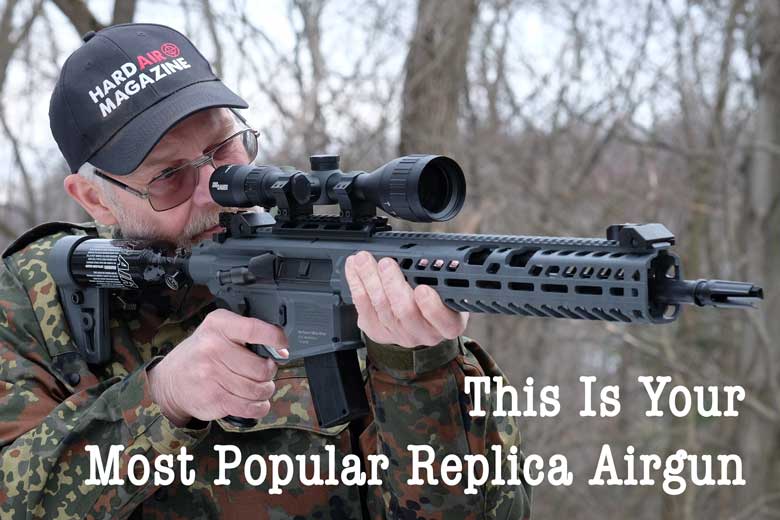 So here’s the list of your 2021 most popular replica airgun reviews to date. There’s four pistols and six long guns in your choice. Eight of them are CO2-powered. But there’s one PCP and one underlever springer here.

One thing’s clear – you like SIG! SIG Air products comprise four of your top ten most popular replica airgun reviews, including number one – the PCP Virtus. 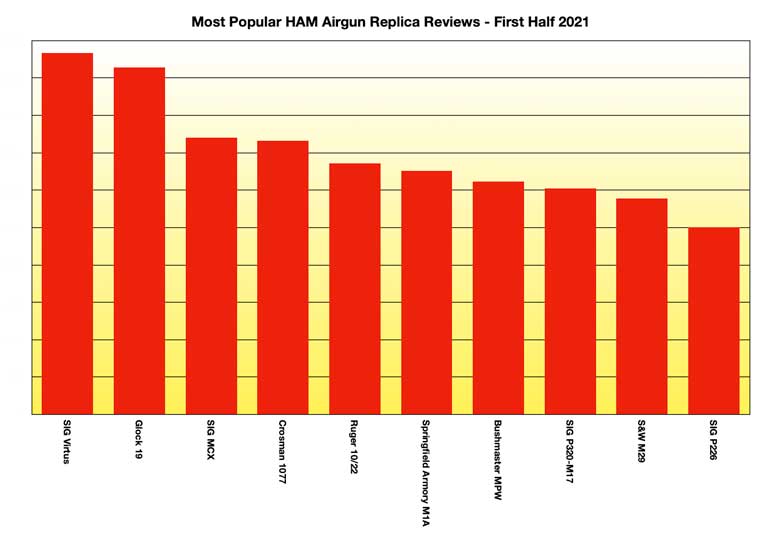 It’s a good reproduction of the manufacturer’s centerfire Virtus and provides many options for accessorizing with scopes, lights, bipods etc.

As the only PCP in this list, you’ll also need to budget for HPA filling equipment – a handpump, tank or compressor. It’s also the only .22 caliber replica in the current SIG lineup. Although the Virtus scores a high 87%, the price holds it back to a Bronze Award. 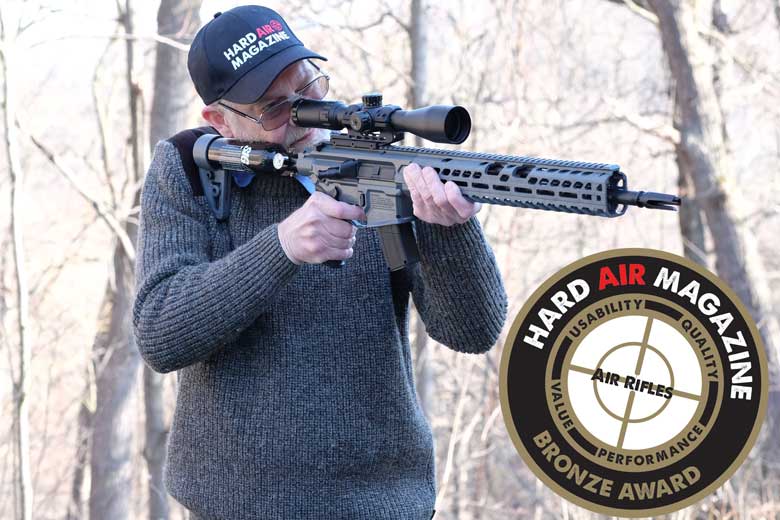 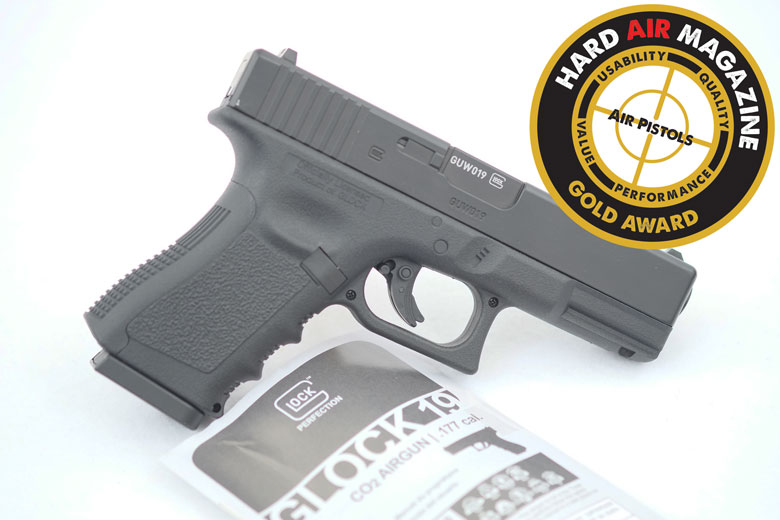 The SIG MCX has been around for some time, but it’s obviously still extremely popular with HAM readers!

If you’re among the many looking for an ultra-realistic replica of an outstanding semi automatic military firearm for fun shooting or weapons training, you need look no further.

Unlike the similar Virtus, this model is powered by one 88/90 Gram CO2 cartridge, it’s also in .177 caliber. Otherwise there’s many similarities between the two and the MCX does not need the PCP charging equipment.

It’s also available in bundles with scope, with red dot sight or plain iron sights. There’s Flat Dark Earth versions, too. And the price is now lower than when HAM reviewed it back in 2016. 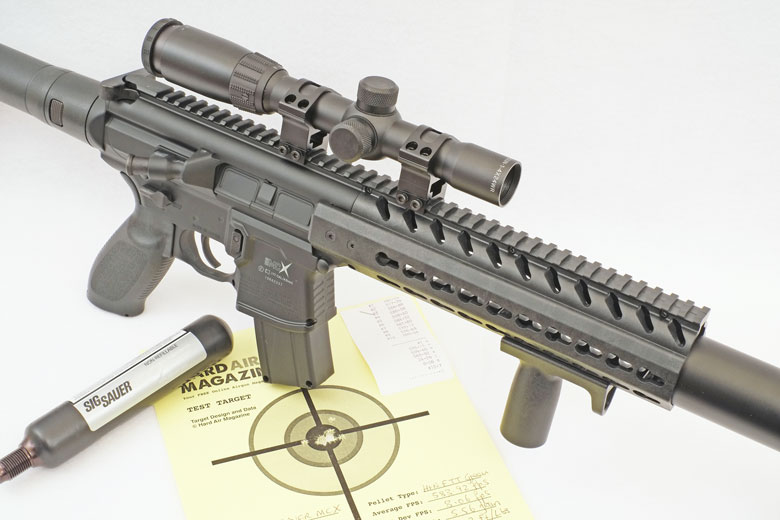 The 1077 is a fun gun to shoot with its 12-shot clip and rapid-fire capability. It’s a great plinker – that’s its sole purpose in life. There’s not enough power here for hunting any type of bird or critter, so please don’t try to use it for that. 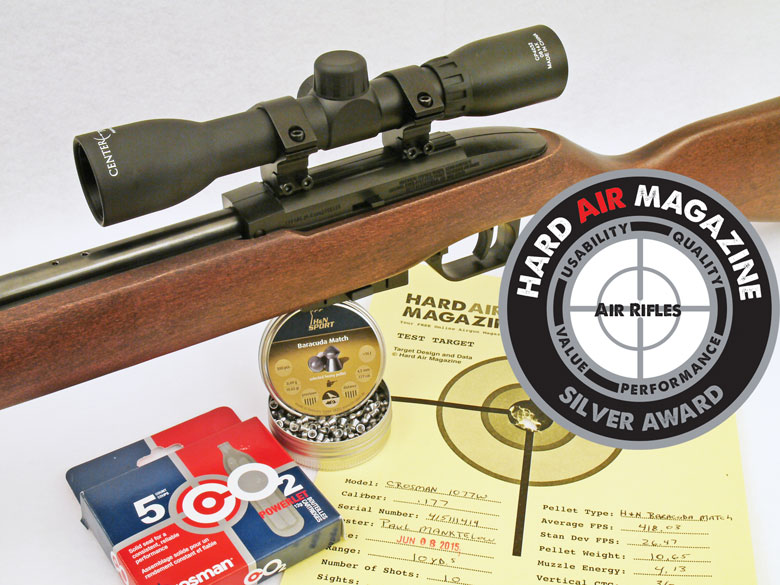 HAM reviewed the wood stock version of the Crosman 1077 air rifle back in 2016. It’s been around for much longer than that and so has proved its value in sustained sales over many years. The wood stock looks and feels much better than the black plastic version and is well worth the extra cost.

For its combination of quality, usability, value and performance, the Crosman 1077 air rifle received a HAM Silver Award.

Although never officially called-out as a firearms replica, there’s no doubt that the 1077 is heavily based on the Ruger 10/22 style of firearm.

What, didn’t we just look at a 10/22 replica in this list of most popular replica airgun reviews? Well yes, but this is the real deal. It has the Ruger brand and 10/22 name. It’s also a much newer airgun, although of a similar style. 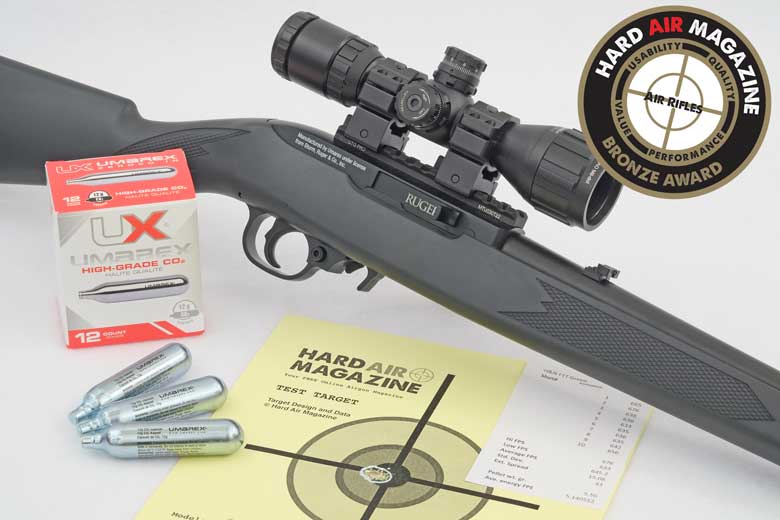 At a Street Price of $129.95, a ton of people will buy the Ruger 10/22 air rifle – on the name if nothing else. It’s a very realistic-looking replica of the semi-auto rimfire.

For the increasing number of airgun shooters who want to use alloy pellets, this big news is that the Ruger 10/22 air rifle tested by HAM shot extremely well with them. In fact, better than with lead pellets – that’s very unusual!

And most buyers are likely to be happy with the performance if the gun is used as a backyard plinker and fun shooter.

Like the rimfire 10/22, if you want to make full use of the accuracy, you’ll need to scope the gun. And you’ll need to buy a dedicated 10/22 Picatinny rail adapter. Both are extra cost and – together – can double the price of the basic airgun. 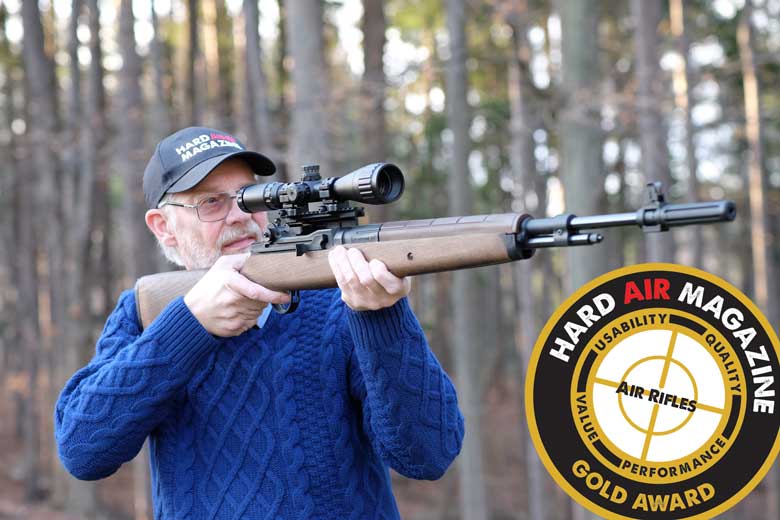 The Springfield Armory M1A air rifle is a “lookalike” version of the classic centerfire rifle. Just the prominent box magazine is missing to complete the picture.

Some people will like it because it reminds them of the M14 battle rifle (that they may have carried in service). Others will like it because of the substantial wood butt stock – yes, it’s real “tree wood”, compared to the sea of synthetic-stocked springers out there around this price.

Another group will like it because they value the accuracy potential that the fixed barrel, underlever cocking system offers. And then there’s the folk that will welcome the included adjustable open sights that are slowly fading from being an inevitable part of every air rifle.

So the Springfield Armory M1A air rifle is likely to appeal to many types of airgunners. It’s definitely great value and HAM Gold Award winner! 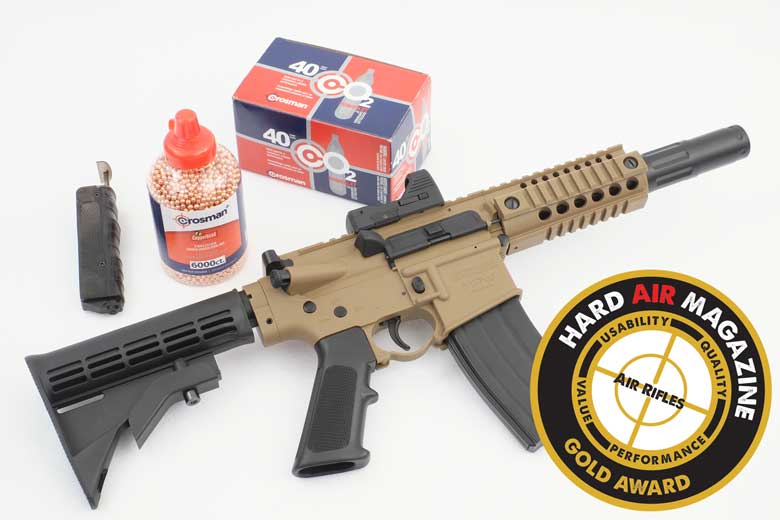 The price is realistic and it’s backed by good warranty coverage and great support from Velocity Outdoors (Crosman).

The only minor downsides are the relatively low FPS and heavy trigger – at least in the sample tested by HAM.

SIG Air is one of the few manufacturers producing pellet-firing replicas and this capability will make it a “no-brainer” purchase for some. The fact that it’s such a CO2-powered version of the M17 will make it a must have for many more! 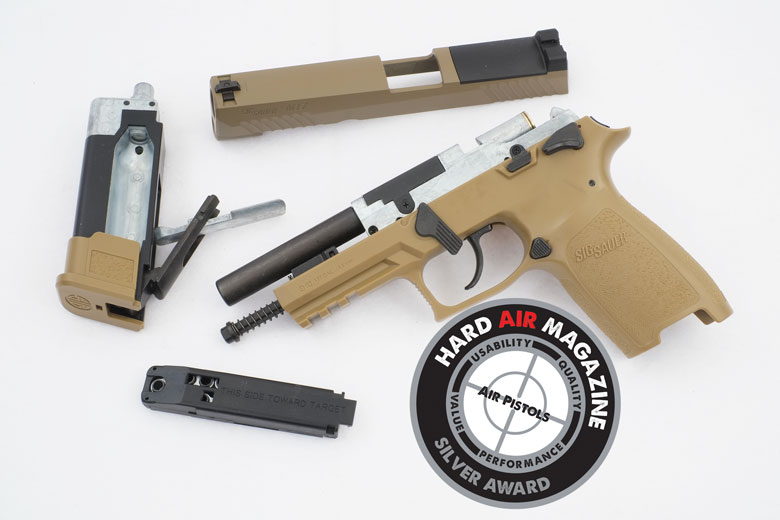 A ton of people will buy the S&W M29 BB revolver for its “make my day” movie connections. They won’t be disappointed. It’s a very realistic replica of the classic 44 Magnum revolver.

Finish is outstanding, power and shot count as expected. Accuracy of the tested gun was very good, too. True, this is not the cheapest BB revolver out there. But it is about the biggest and one of the best.

The M29 is a HAM Gold Award winner – with a lighter trigger it would be close to perfect. And yes, it can fire pellets also. HAM checked this out in a follow-up story. 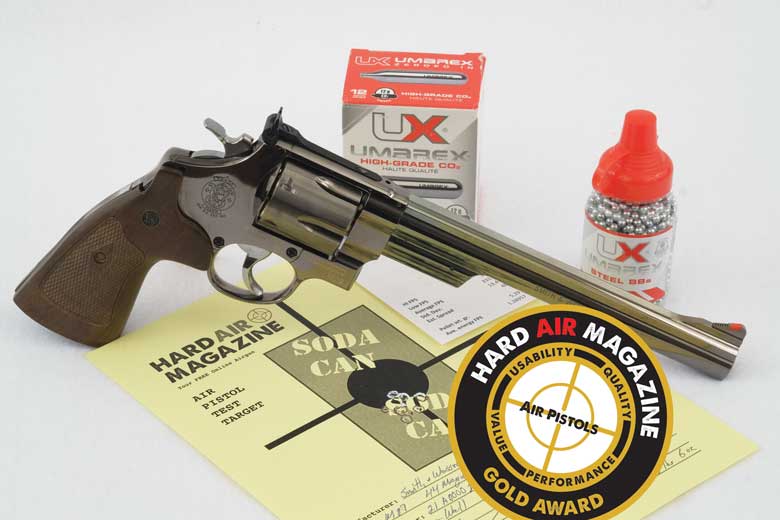 Last but not least in your choice of most popular replica airgun reviews for 2021 is another SIG product. The SIG SAUER P226 pellet pistol is a good, functional CO2-powered version of the P226 firearm. 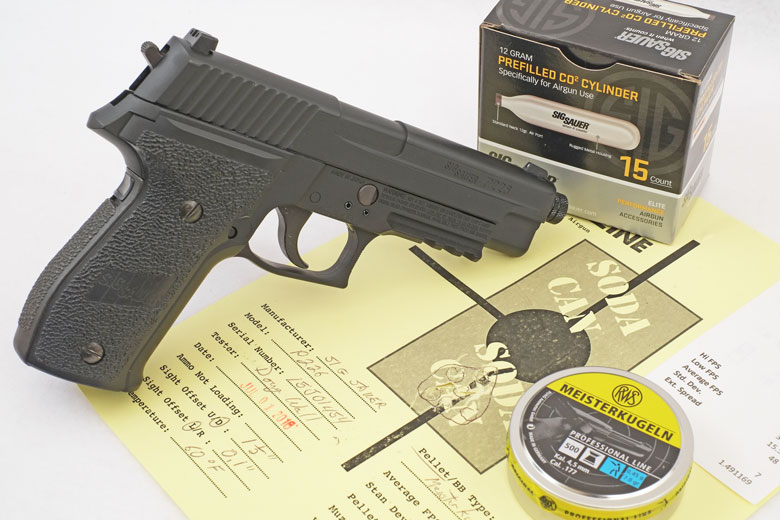 Considered on its own, there’s nothing wrong with the P226 and much that’s right.