PCP Efficiency – What Is It? – What Changes It? 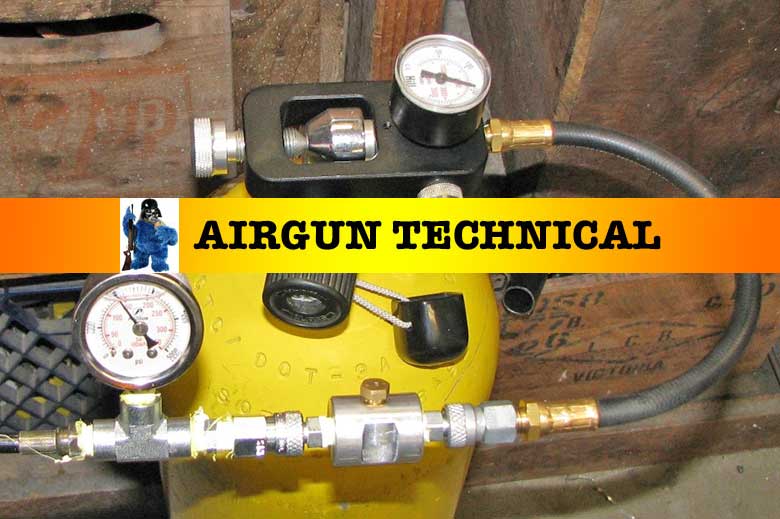 Over the previous articles I have mentioned PCP efficiency, without really defining it, so here we go…

When I first started looking at PCP efficiency, I discovered a term called “bar-cc per FPE”. This is a measure of how much air a PCP uses to produce each foot pound (FPE) of energy.

A “bar-cc” is the volume of air in cc, multiplied by the pressure of that air in bar.

The more FPE you get from each bar-cc of air, the more efficient the gun is. The problem with “bar-cc per FPE” was, that smaller numbers represent higher efficiency, which to me was counter-intuitive.

My logical brain revolted, so I came up with a new “unit” that to me made more sense, “FPE/CI”. Instead of using cc’s of air, I used what I call the “standard CI”, or 1 cubic inch of air at 1 bar of pressure. By moving the energy to the numerator (top) of the fraction, larger numbers meant higher efficiency. Here is a comparison of the two systems. 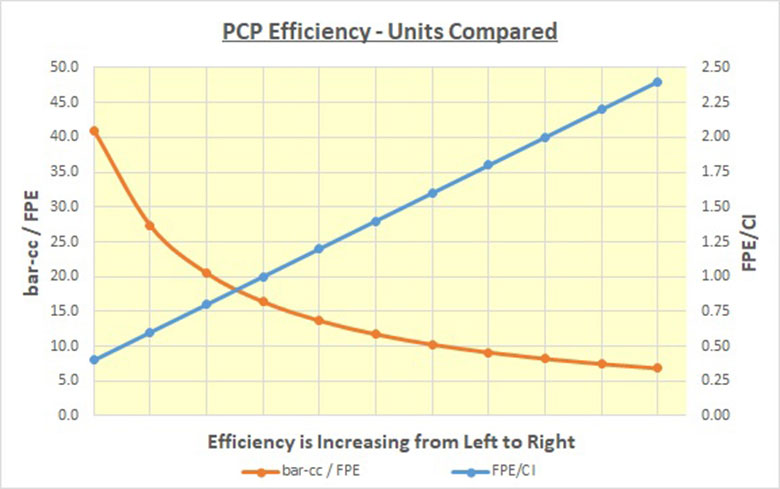 The bonus was that at the time (a decade ago), the average PCP efficiency ended up being about 1.0 FPE/CI. If the efficiency was less than 1.0 FPE/CI (some big bore PCPs are about 0.5 FPE/CI), you could probably do better. If it was 1.50 FPE/CI, that was very good.

Things have changed, and now we occasionally see PCP efficiency reach 2.00 FPE/CI or even a bit more. I think that is all because now we have an easy to understand metric to measure efficiency by, so people are paying more attention to how much air their PCP uses.

Of course “bar-cc” and “standard CI” are pretty much the same thing, just different units. To get the volume of air your PCP uses for a shot string, in standard CI, you multiply the pressure drop in bar by the internal volume of the air reservoir in CI.

Alternately, you can calculate the bar-cc and convert it to standard CI. Here is an example for a Marauder (reservoir of 215 cc = 13.1 CI) where you used 1000 psi of air to shoot a shot string:

Total Energy in the Shot String and Efficiency

Let’s assume the shot string that caused your reservoir pressure to drop 1000 psi consisted of 30 shots averaging 40 FPE. That is a total FPE of 30 x 40 = 1200 FPE of total energy. To find the efficiency, in FPE/CI, we divide the total energy by the total volume of air used, as follows:

If you can get more FPE from a given pressure drop – or get less pressure drop for a given total FPE – you have increased the efficiency.

How PCP Efficiency Relates to Velocity and Power

In basic terms, the more power you ask your gun to produce, the lower the PCP efficiency will be. We saw earlier how the velocity was related to the hammer strike, with a velocity plateau, knee and downslope. Here is one of those curves, with the efficiency plotted as well. 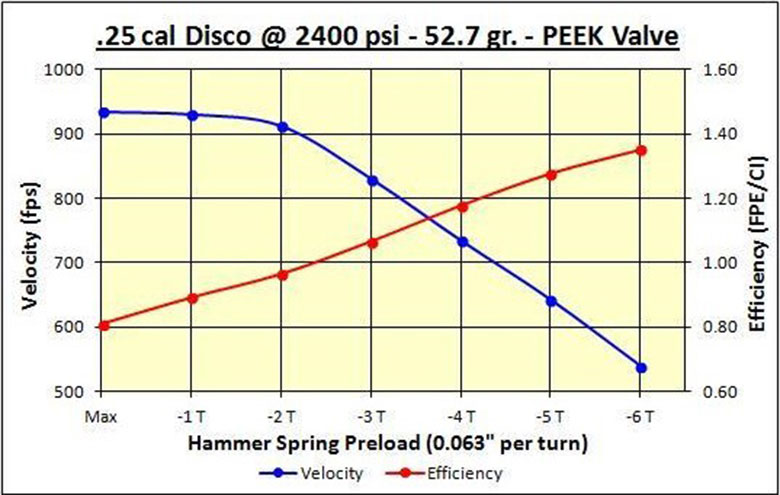 As you can see, reducing the hammer strike, which means the valve is closing sooner, reduces the velocity but increases the efficiency. This applies to virtually every PCP, but of course there is a limit. If you reduce the velocity to a very low value, the efficiency eventually drops off, like this: 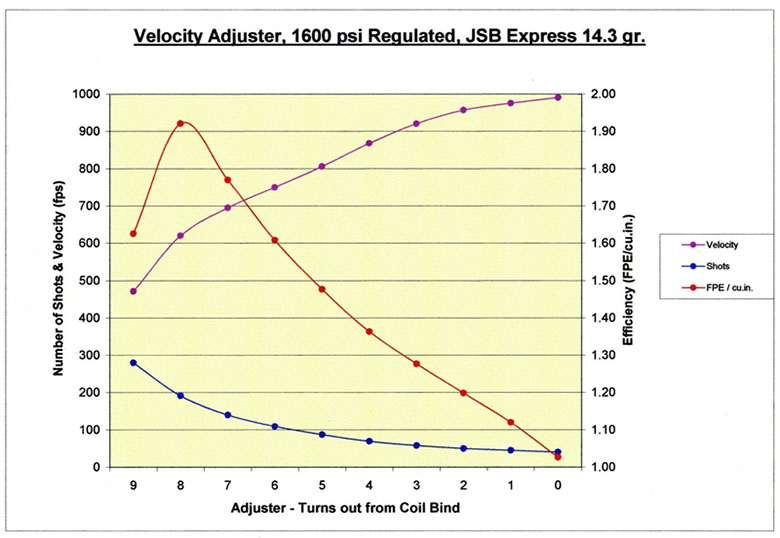 At some point, as you reduce the velocity, the tiny sip of air being released by the valve is overwhelmed by various losses, such as the friction of the pellet in the barrel, and the efficiency rolls over and dies.

Again, this is typical of all PCPs, it just occurs at a different point for each one. Generally, you would never tune a gun down to the point where this happens. You are using an elephant gun to shoot fleas.

Your Tune Affects the Efficiency

In practical terms, we can get huge differences in the performance and the related PCP efficiency by how we tune it.

We have a choice of a few shots at high power, or many shots at much reduced power. Sometimes with just a simple adjustment of hammer spring preload or SSG gap, we can change a gun from mild to wild.

Remember the basic concept that reducing the hammer strike reduces the dwell and the amount of air released by the valve, increasing efficiency and shot count. 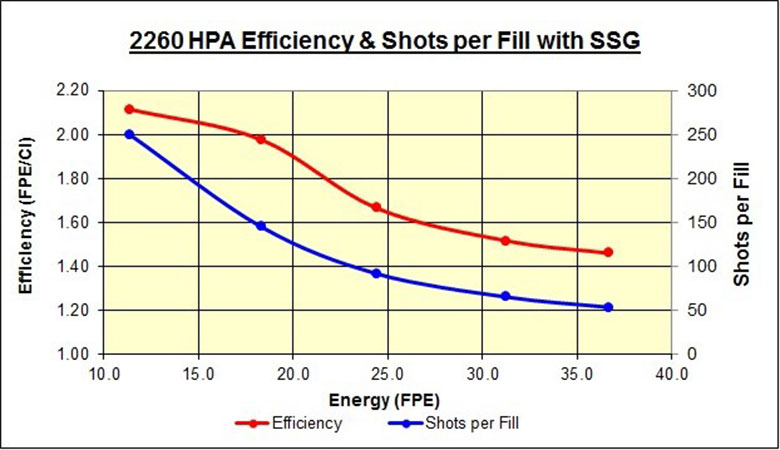 This particular regulated PCP could produce 50 shots at 37 FPE from a 13 CI tank regulated at 1600 psi, at an efficiency of 1.47 FPE/CI. That is pretty good, but I could also turn the power down if I wanted more shots.

At about 11 FPE, I could get 250 shots at an efficiency of 2.12 FPE/CI, something which was unheard of a decade ago. This gun uses an SSG, and the only adjustment required was increasing the free-flight gap to reduce the power. For information on the SSG and how it can improve efficiency, check out Article 6 in this series.

One thing I need to mention…

When you see claims of extremely high efficiency, over 2.0 FPE/CI, there is almost always a reason. Either the data was gathered with heavy pellets at lower than usual velocity, or the gun is turned down to a fraction of its potential (so again, low velocity).

So far we aren’t seeing such high efficiency at velocities of 800 fps or over.

Something Different for You to Ponder

I’ll leave you with a clever device from a decade ago, marketed in Canada for use in pumpers and CO2 guns. It is a rear cocking system called the “Dual Power Hammer”, and is no longer available. It has two positions to catch the trigger sear. It allows you to shoot on the plateau or downslope, alternating between them as you choose.

While not particularly useful for an unregulated PCP, some version of this idea could be used to advantage in regulated PCPs.
Pulling it back all the way provides a “normal” hammer strike, and therefore full power. Using the “half-cock” position reduces the hammer travel, striking the valve with much less force, and causing a drastic reduction in dwell, velocity and FPE.

For those of you who might be looking for a “hunting” and “plinking” tune without having to make major adjustments, this might be worth pursuing. As a challenge for you creative types, how about incorporating an SSG into the design?

See you next month!