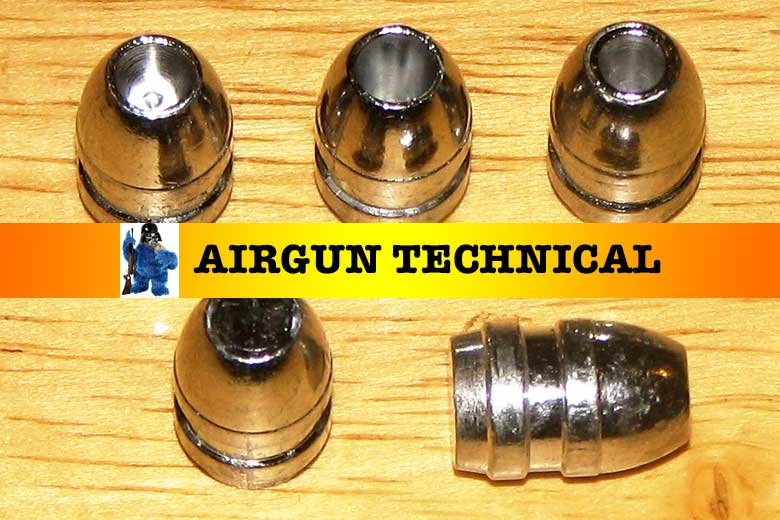 It is important to realize that pellet stability and slug stability are different forms of the same phenomenon.

Our typical Diabolo (waisted) pellets primarily get their stability from the Center of Pressure (CP), caused by the drag of the flared skirt, being behind the Center of Gravity (CG). This makes them naturally stable in flight much like the behavior of a dart, arrow or Badminton shuttlecock.

Here is a graphic representation of how that occurs: 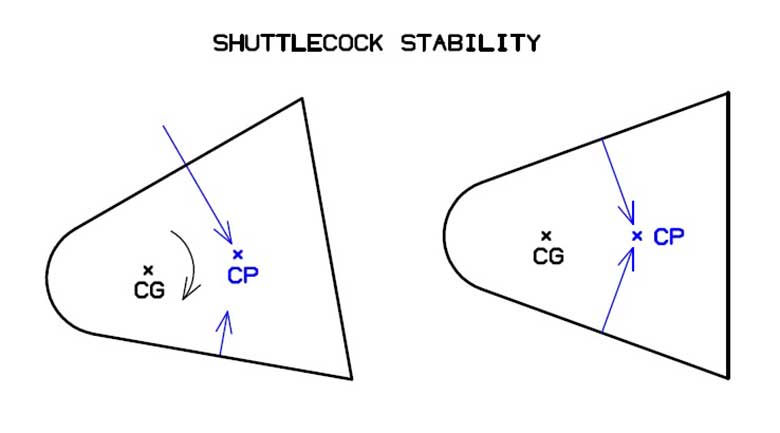 When the pellet is not travelling straight, there is more pressure or drag on one side than the other (left drawing), and the CP is offset, causing a torque or twisting moment about the CG.

The pellet will tend to yaw less until the CP is directly behind the CG (right drawing) and the pellet travels straight. This is called “Shuttlecock Stability” and pellets are often referred to as “Drag Stabilized”. This is not strictly true, pellets are “Flare Stabilized”, but the effect is the same.

Pellets actually need very little spin, something which for some reason it has taken airgun manufacturers a very long time to realize. Only recently have they started producing slow twist barrels, which allow the pellet to maintain “Dynamic Stability” at longer ranges. More about that later.

As indicated above, slug stability is different.

Most slugs have the CG behind the CP due to their shape, and the higher air pressure around the nose. They would naturally want to turn backwards, or tumble, so we use a rifled barrel, with twisted grooves. This induces a high rate of spin, making them stable like a gyroscope.

Although when calculating twist rate we work in calibers, it is nearly always specified as “1 turn in XX inches”, which means the grooves (and slug) rotate 360 degrees in that distance. A smaller number (less inches) results in a faster twist, and a higher RPM for a given velocity.

A perfect slug (or bullet), flying straight, with sufficient gyroscopic stability, is represented below at the top left. 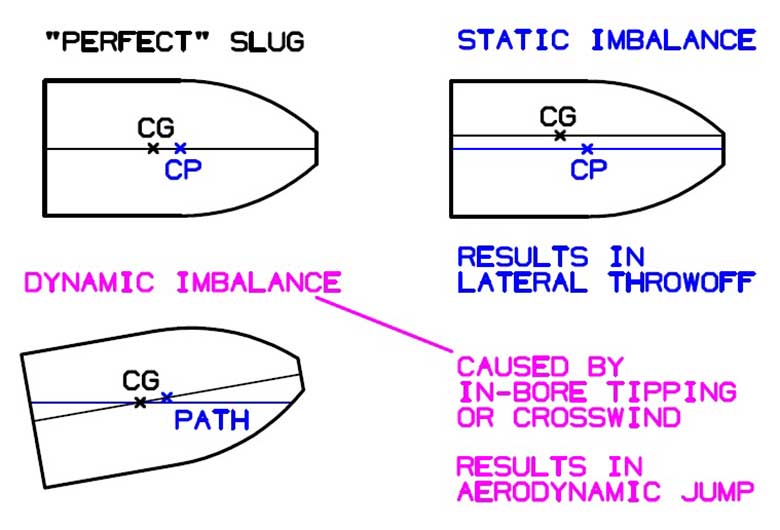 Unfortunately, very few slugs are perfect. There may be tiny voids in the lead, or imperfections from casting or swaging, that causes them to be asymmetrical. This results in the CG being offset from the shape (and hence the CP), as in the upper right sketch.

Inside the barrel the slug is rotating around its center of form (shape) which means the CG is corkscrewing down the bore slightly. When it reaches the muzzle, it is no longer constrained by the barrel, and the CG wants to travel straight.

This causes slug stability to break down. The slug vibrates like an out of balance tire!

In addition, as the forces realign, the slug yaws. There is also a reaction to that yaw which causes the slug to suddenly depart from the direction the barrel is pointing.

This is called “Lateral Throwoff”, and is one of the primary reasons for both fliers and increased group size.

The other cause for inaccuracy is yaw. Yaw means the slug is not pointing in the direction it is traveling. It is “crooked” relative to the air it is passing through. This causes “Dynamic Instability” as represented in the lower left sketch in the drawing above.

This yaw can start out inside the bore because the slug is loaded crooked. More commonly, it occurs when the slug leaves the muzzle and is hit by crosswind. We talked about that last month in the article about “Aerodynamic Jump”.

When a gyroscope (in this case our spinning slug) is disturbed, it generates a force at right angles to the disturbing force, and it reacts by rotating about its CG. It tends to wobble, with the nose of the slug moving in a complicated helical pattern which is actually two different wobbles occurring at the same time.

These wobbles are called “Nutation” and “Precession”, and are represented by the “two arm model” below. 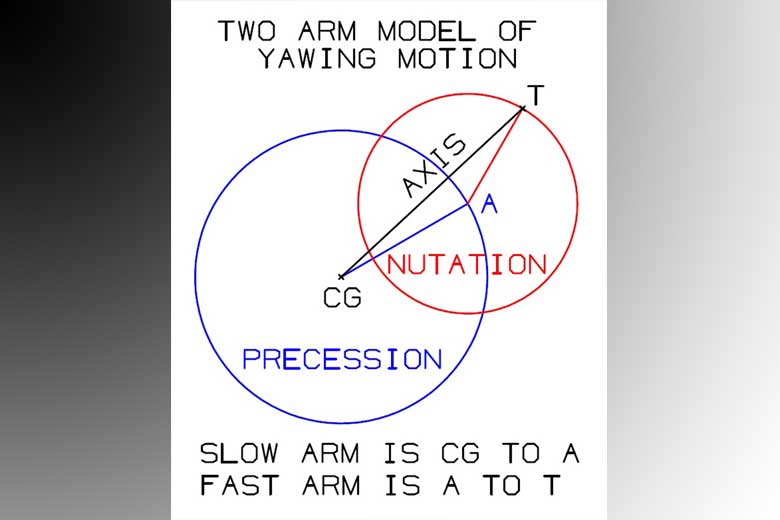 If the slug is “Dynamically Stable”, as it flies downrange the Nutation and Precession both decrease, and the yaw becomes less and less. This is sometimes known as a bullet “going to sleep”, with the result that the group size (in MOA) actually gets a bit smaller over the first portion of its flight. You can view a drawing of a bullet that is Dynamically Stable here:
http://ffden-2.phys.uaf.edu/212fall2001_Web_projects/Isaac%20Rowland/Ballistics/Bulletflight/fig22.htm

Unfortunately, some slugs are not Dynamically Stable, in some barrels at some velocities, with bad effects on slug stability.

If either the Nutation or Precession, or both, increase as the slug (or pellet) travel downrange, the projectile has “Dynamic Instability”. The yaw increases, and the projectile develops a spiral or corkscrew path. You can view a drawing of a bullet that exhibits Dynamic Instability here:
http://ffden-2.phys.uaf.edu/212fall2001_Web_projects/Isaac%20Rowland/Ballistics/Bulletflight/fig26.htm

The reasons for Dynamic Instability are well understood, but calculating it is nearly impossible.

Some slugs, and many pellets, start out fine, and then as they travel downrange they suddenly begin to spiral. This is because the spin (RPM) of the slug slows down much less than its forward velocity. While this increases the gyroscopic stability, it may decrease the dynamic stability.

Sometimes, however, just slowing down the pellet will prevent this problem…

Slow it Down – or Reduce the Twist Rate

When you reduce the muzzle velocity, you also reduce the RPM of the pellet or slug. As the pellet travels downrange, it must travel further before Dynamic Instability can show up.

Sometimes it completely cures the issue, other times, it just pushes the spiraling further out – but often further than you need to shoot!

The other solution is to use a barrel with a slower twist rate.

This is where airgun manufacturers have “suddenly” woken up in recent years. As we pushed the range of our airguns further and further, corkscrewing reared its ugly head.

We could slow down the velocity, but that wasn’t great if you were shooting at 100 yards! The alternative was to make barrels with a slower twist rate.

One of the first “slow twist” barrels was one Sean Pero and I designed for .30 cal pellets with a twist rate of only 26 inches. Tim McMurray used it to win the 2014 Extreme Benchrest competition, and the race was on to develop better long range barrels.

We’ll talk more about twist rate and stability next month.