The Effect of Port Sizes on PCP Airgun Power 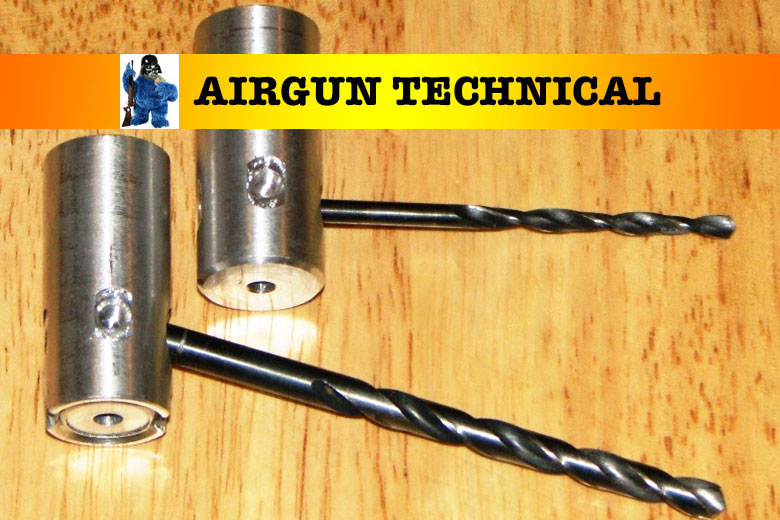 In the first three articles of this series on PCP airgun power, we have covered what the “lofty FPE goal” for any given combination of pressure and barrel volume might be, and the factors that influence your ability to approach that FPE level.

In this article, we will examine the effect of changing the port size on PCP airgun power.

When I use the term “port”, I am referring to the area between the air in the reservoir and the barrel. There are several distinct parts to this.
1. The valve seat and throat area, next the exhaust port in the valve.
2. There’s usually a “transfer port” which moves the air from the valve to the barrel.
3. The port in the barrel itself, where the air enters the space behind the pellet.

Some designs, such as the Air Force PCPs, use a linear or axial flow arrangement between the tank (which is the buttstock) and the pellet. This minimizes the twists and turns the air must make when flowing to the barrel. While this can have a flow advantage, it also increases the volume (length) between the valve seat and the pellet, causing slightly more pressure drop along the way.

Today I will concentrate on the “conventional” arrangement, where the valve is under the barrel, with its easily removable (and therefore tunable) transfer port between the valve and barrel.

The chart below shows the results I obtained with a PCP using primarily Crosman Discovery parts. However I substituted the air reservoir from a 2260 (half the volume), to minimize the number of pellets I had to shoot when testing.

I used the same 14.3 gr. JSB pellets for all testing, filled to 2000 psi for each string, and graphed all shots that were within 4% of the maximum velocity for each string. The only thing I changed was the transfer port diameter.

The stock transfer port size on a “Disco” is 0.140 inch, with the valve port being slightly larger, and the barrel port a bit smaller at 0.134 inch. 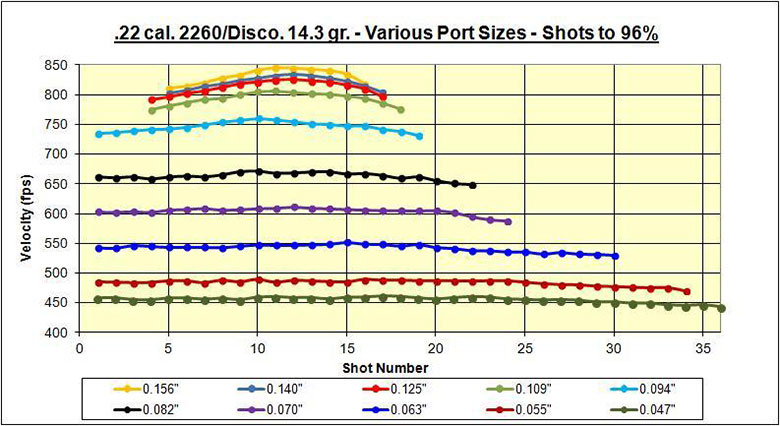 There are two important trends shown in this chart. Smaller ports reduce the velocity, but produce more shots in a flatter bell-curve, over a wider pressure range. Larger ports may increase the velocity slightly, but the number of shots decreases, and the bell-curve becomes shorter and steeper.

Smaller ports can therefore be used to tune for lower PCP airgun power, generally resulting in a greater shot count. This can also increase the efficiency by increasing the total FPE produced per fill for the same amount of air being used.

The opposite can also be used to increase PCP airgun power, but you must open all the ports to the same area.

I did this recently with a .22 cal. Beeman Chief to increase the power. JSB 18.1 gr. Pellets were used for both strings. You can see the results here. 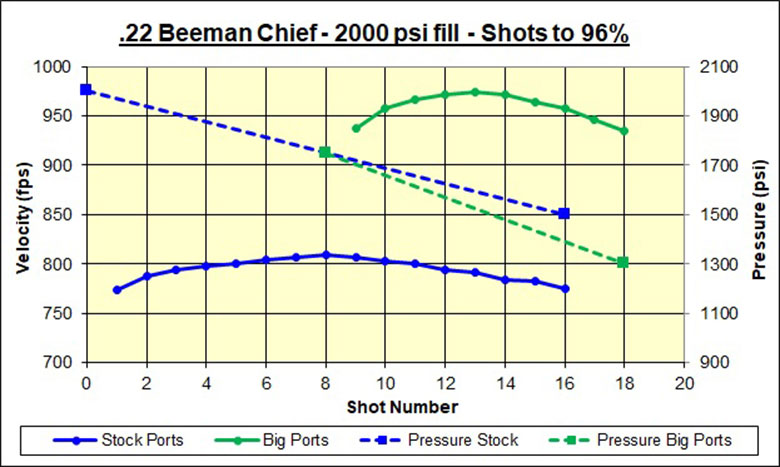 The efficiency of both strings was essentially the same.

This shows how an increase of port size can be used to add power to a PCP. The ability to develop more power at a lower pressure can be used to great advantage in a regulated PCP, and I will address that in a later article.

It is also possible to adjust the port size without disassembly and changing the transfer port, providing that this capability is designed into the gun.

A perfect example is the “Velocity Adjustment Screw” on the right side of the action on a Benjamin Marauder. Under a setscrew is an adjusting screw that can partially close off the transfer port to restrict the flow, reducing the power.

I have a similar arrangement in my receivers that use a “J slot” to retract the bolt handle. There is a pin that can be adjusted by a screw in the back of the receiver to limit how far the bolt handle can retract, as in this photo.

The red arrow points to the pin which is partially extended. The adjusting screw is directly behind the arrow.

In this case I had 9 turns of adjustment between wide open and closed, and the change in port area that resulted is shown as the black line on the chart above. This adjustment allows me to quickly and easily test pellets at different velocities, to determine for example if they lose accuracy when driven too fast.

You remember how the bore area varied by the square of the caliber, and the force on the pellet, for a given pressure, was proportional to that area? Well, it turns out that I have developed another “rule of thumb” to go along with my “lofty goal” formula.

There is no mathematics I can use to prove this, but after many years I have found this to be a useful guide for what to expect when you vary the port size.

Instead of squaring the caliber (and multiplying by PI/4) to get the area, I use this formula instead:
A = C x D x PI/4
(caliber C and smallest port diameter D in inches, area A in square inches, PI = 22/7)

When multiplied by the pressure and barrel length as before, you can produce PCP airgun power charts that look like this: 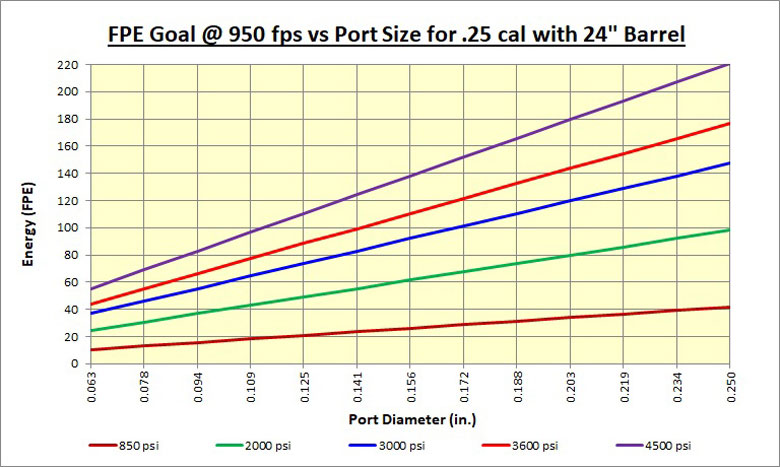 Each caliber and barrel length would have its own chart, of course. I chose a 24 inch barrel because not only is that size typical for PCPs, but it happens to be the divisor in my “lofty goal” equation.

The numbers plotted in the above chart are therefore simply the area A from the above formula, times the pressure P in psi.
Once again, these numbers are a “lofty goal”, and I have not exceeded them when using a pellet producing a velocity of 950 fps or above. It is possible, however, that by using a heavy pellet at a lower velocity (reducing the percentage of energy lost to accelerating the air) you may be able to reach, or exceed this power level.

In my next article I will be addressing how changing the hammer strike affects PCP airgun power.