The External Ballistics Of Diabolo Pellets 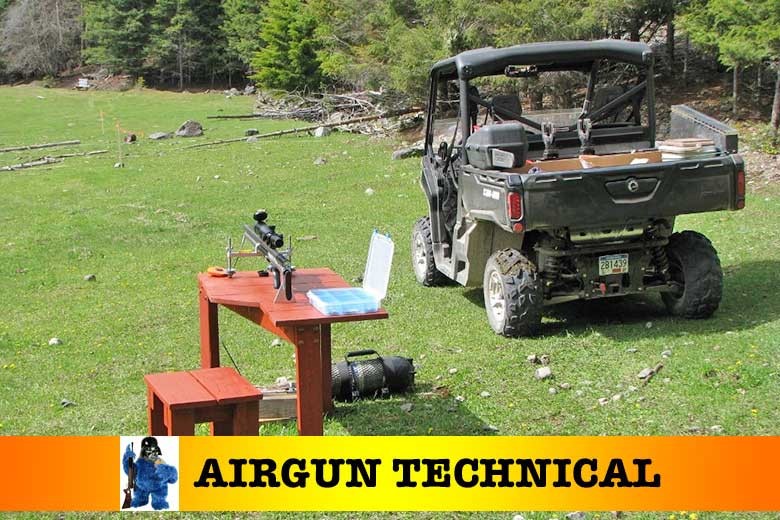 You can find the Internet’s most comprehensive collection of airgun Ballistic Coefficients on the HAM BC Page.

The subject of External Ballistics is very complex. The primary factors involved are Trajectory, Wind Drift, and Remaining Energy.

These are drastically different for Diabolo (waisted) pellets and slugs (aka bullets), because the Ballistics Coefficient (BC) of a slug is higher.

Therefore I have broken the introduction to External Ballistics into two articles. This one deals with the more common external ballistics of diabolo pellets. Next month I will present similar information for slugs, which are becoming more common for high powered PCPs.

The trajectory of a pellet is governed by its flight time to the target. The biggest component of that is the muzzle velocity (MV). If you sight your gun using a single point zero (about 25 yards), and look at the drop at 100 yards, at different MVs, you will see a relationship like this: 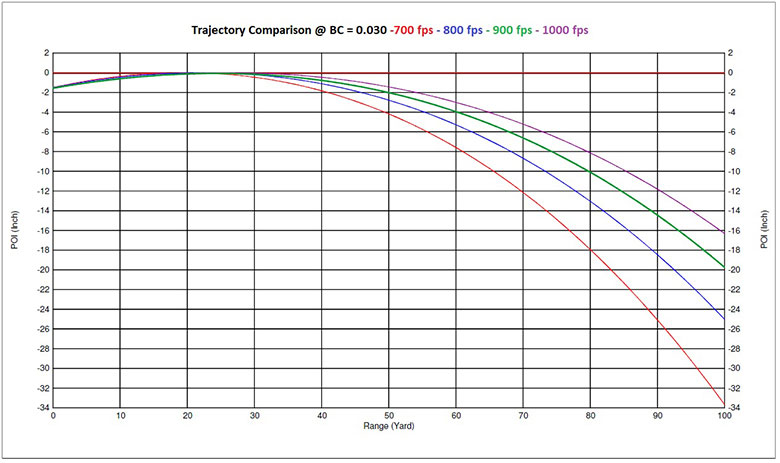 That chart was prepared using ChairGun, using a BC of 0.030, pretty typical for a round nose pellet. The drop decreases as the muzzle velocity increases. It is less than half as much with an MV of 1000 fps (16 inches) compared to an MV of 700 fps (34 inches).

The other major factor affecting the trajectory is the Ballistics Coefficient (BC). That is a measure of how a specific pellet slows, compared to a “standard drag model”.

If the pellet slows more, for a given MV it takes longer to reach the target, so the drop is greater. Here is a comparison of various BCs, all starting at 900 fps with a single point zero, charting again done on ChairGun: 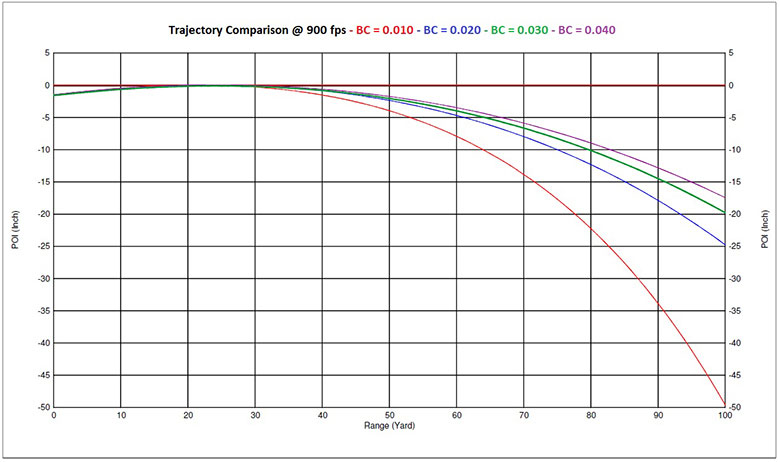 A wadcutter might have a BC of about 0.010, represented by the red line on that chart. It has about 50 inches of drop at 100 yards when using a single point zero.

Doubling the BC to 0.020 (blue line) cuts the drop about in half to 25 inches, but after that the reduction in drop becomes much less as you increase the BC. Doubling the BC again to 0.040 (purple line) only reduces the drop to about 17 inches.

This is an important thing to remember!

A poor BC (like a wadcutter) really hurts the trajectory. But a really excellent BC (for a pellet) only causes a small decrease in drop compared to an average pellet BC.

If you are shooting relatively good, round nosed pellets, with a decent BC, the trajectory is primarily a result of the velocity.

When you shoot in a crosswind, the pellet drifts sideways, causing your POI to be downwind of your POA. The largest factor governing the magnitude of this drift is the BC.

There are many misconceptions about wind drift, the biggest being that “time to target” is the key. That is NOT the case. The wind drift is proportional to the DIFFERENCE in the actual time of flight, compared to what it would be in a vacuum. This is called the “lag time”.

This is a difficult thing to wrap your brain around, and even harder to explain without involved mathematics, so I will leave to you Google it if you don’t believe me. However, it is a fact that we have to deal with when considering the external ballistics of diabolo pellets.

Since the lag time is the key, then how fast the pellet slows down (mostly governed by the BC) is the key. The chart below show how much the wind drift changes as we change the BC. This was calculated using ChairGun, with a MV of 900 fps and a 90 degree crosswind of 10 mph: 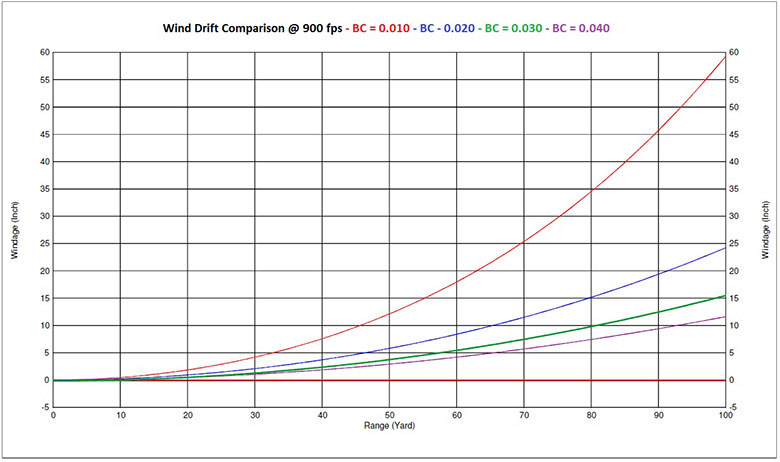 Roughly speaking, the sideways drift of the pellet is inversely proportional to the BC. Double the BC and you get half the drift.

For example going from a BC of 0.040 (purple line) to a BC of 0.020 (blue line) the drift doubles. A really low BC like a wadcutter (the red line) fairs even worse than that relationship at long range, because it is moving so slowly at 100 yards.

Note that even a really good Diabolo pellet will drift about a foot at 100 yards in a 10 mph crosswind!

You would think that increasing the velocity would reduce the wind drift, and it does up to a point. Unfortunately, that only applies up to about 900 fps. Above that the drag increases so rapidly that at 1000 fps the drift is greater than at lower velocities.

Check out the ChairGun chart below, for an average pellet with a BC of 0.030 in the same 10 mph crosswind: 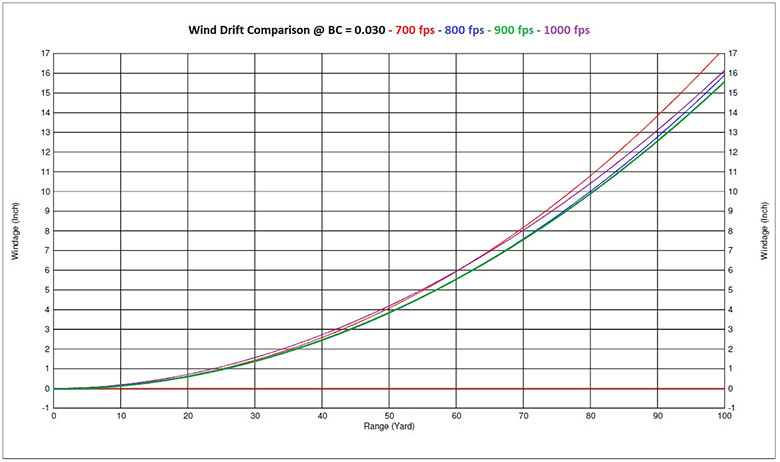 This shows dramatically how important the BC is, and how relatively unimportant the velocity is (within the “normal” range of velocities we use).

Next, look carefully at which velocity has the least drift – the green line, 900 fps. Almost identical to this is the blue line, 800 fps, out to about 70 yards. The drift is greater at 700 fps (red line) as you might expect, but it is also worse at 1000 fps (purple line).

This is because at 900 fps and above (called the Transonic region), the drag of the pellet increases quickly, so the lag time increases, and with it the drift.

The Velocity “Sweet Spot” for Airguns

Following on with the above facts about how velocity affects the wind drift, there must, therefore, be an optimum velocity for any given pellet at any given range, to have the least possible wind drift.

For most of you this will be quite a revelation, but it is absolutely true! 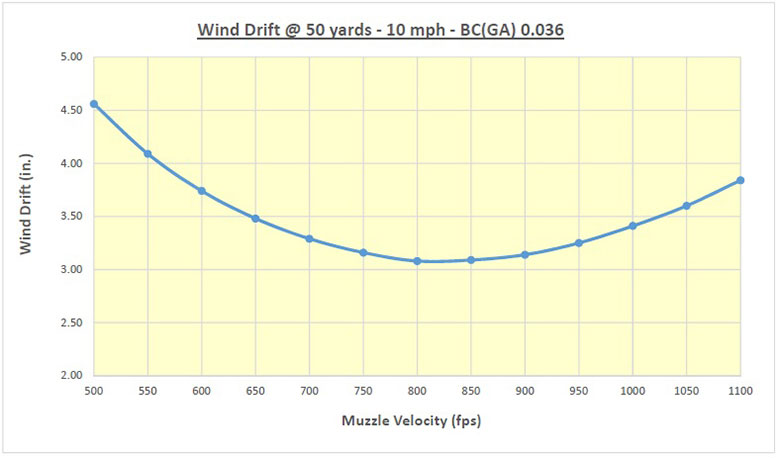 The drift was calculated using a BC (GA) = 0.036 in Chairgun. Note that the least wind drift occurs when starting with a muzzle velocity of 800-850 fps, and increases when the MV is either slower (expected) or faster (rather unexpected).

The wind drift increases by 10% at about 700 fps, and also at about 960 fps. Assuming the accuracy is the same over this range of velocities, the sweet spot (for this BC) would be between 850-960 fps.

The same thing applies at 100 yards, but with slightly different MVs as you can see below: 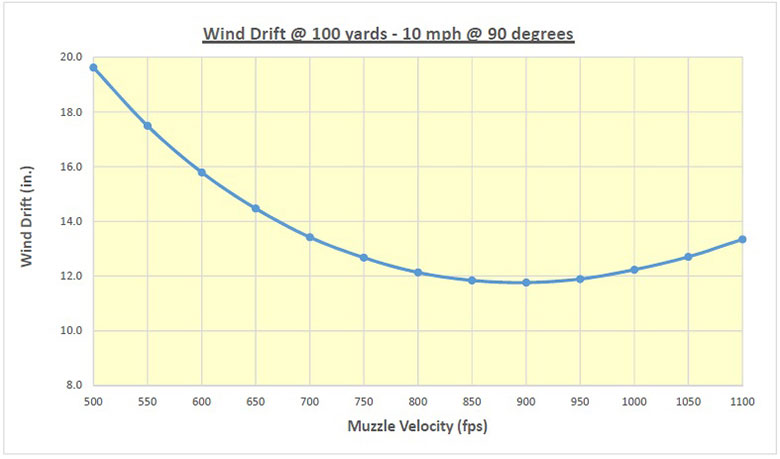 Since it is the average velocity that affects the drag felt by the pellet as it travels to the target, the location of the minimum drift moves to a slightly higher muzzle velocity, while the drift at low velocities drastically increases.

The reason I have chosen the upper side of the MV range that produces the minimum drift should be obvious, as the trajectory is flatter at higher velocities, So if the wind drift is nearly as good, we may as well take advantage of less drop.

Note that the “sweet spot” velocity will change with BC, wadcutters will have a slower optimum velocity than a good round nose pellet like the JSB Heavy we looked at above. For the JSB Exact Series of pellets, I prefer the mid-900s as the best compromise between flat trajectory and minimum wind drift.

So now we know something about the external ballistics of diabolo pellets. Next month I will be doing exactly the same thing, but for slugs, so come back then to see how using projectiles with a much higher BC changes things…