The External Ballistics Of Slugs In Airguns 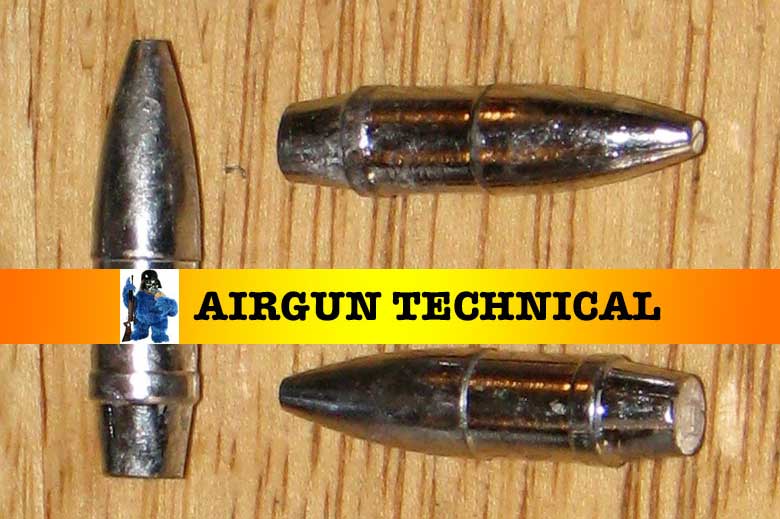 Last month I talked about how the velocity and ballistics coefficient affect the trajectory and wind drift when you are using Diabolo (waisted) pellets. This month I will cover the same ideas, but for slugs in airguns, which are often used by today’s modern high powered PCPs.

Actually, I prefer to use the term “bullets” for these projectiles as that’s the technically-correct description. However, modern airgun lingo refers to them as “slugs”. So I will – somewhat reluctantly – use that term.

For the most part slugs in airguns act in a similar manner to pellets. But there are some subtle differences as we will see…

The trajectory of a slug is governed by its flight time to the target. The biggest component of that is the muzzle velocity (MV). If you sight your gun with a single zero (about 25 yards), and look at the drop at 100 yards, at different MVs, you will see a relationship like this: 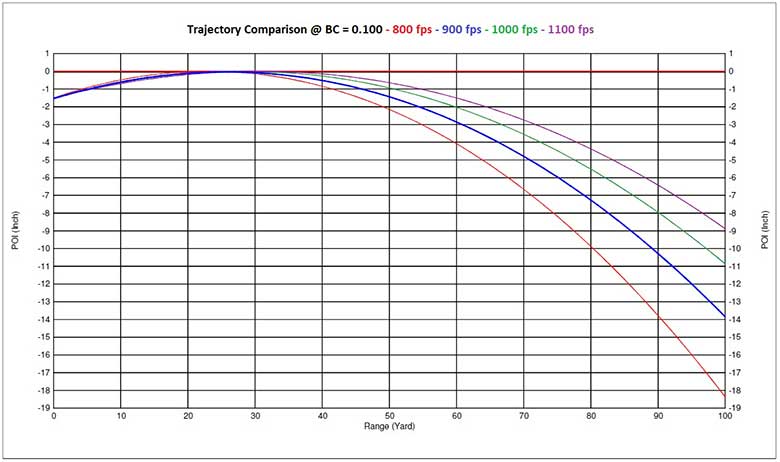 That chart was prepared using ChairGun, using a BC of 0.100, pretty typical for a light PCP slug. The drop decreases as the MV increases. It is roughly half as much with an MV of 1100 fps (9 inches) compared to an MV of 800 fps (18 inches). So faster is better!

The other major factor affecting the trajectory is the Ballistics Coefficient (BC). That is a measure of how your slug slows, compared to the “standard G1 drag model”.

If the slug slows more, for a given MV it takes longer to reach the target, so the drop is greater.

Here is a comparison of various BCs, all starting at 900 fps, and again sighted for a single zero, charting done on ChairGun: 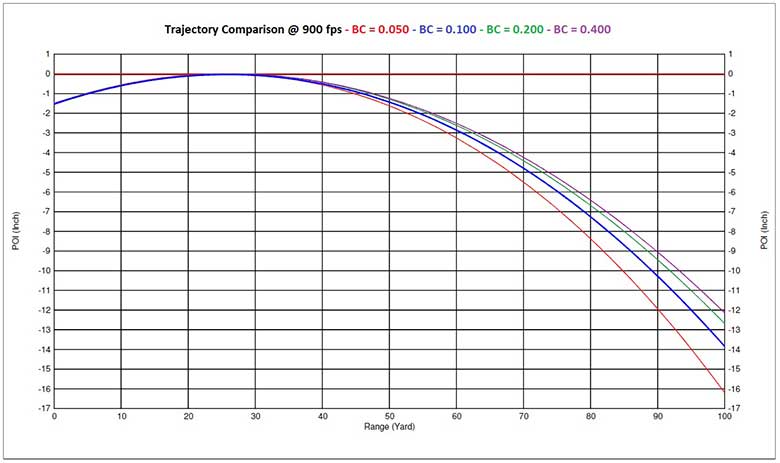 Doubling the BC to 0.100 (blue line) reduces the drop to just under 14 inches. But after that the reduction in drop becomes much less as you increase the BC.

This is an important thing to remember!

Slugs in airguns have a far better BC than pellets. But at 100 yards, there is very little difference in the trajectory with differing BCs.

If you are shooting at longer ranges, 200 yards and beyond, then the BC makes a difference, of course. The trajectory, however, is still primarily a result of the velocity.

As with pellets, the lag time is the key to wind drift. This is mostly governed by the BC.

The chart below show how much the wind drift changes as we change the BC. This was calculated using ChairGun, with an MV of 900 fps and a 90 degree crosswind of 10 mph: 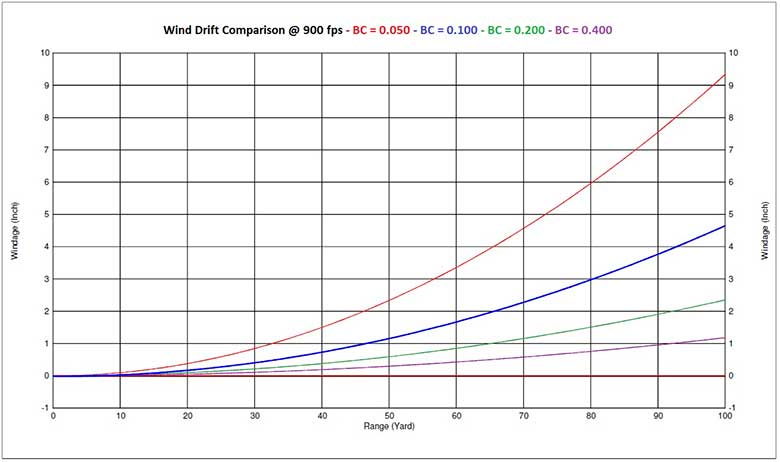 Practically speaking, the sideways drift of the slug is inversely proportional to the BC. Double the BC and you get half the drift.

If you compare this to last month’s chart, you will see what a HUGE difference there is between the wind drift of a slug and a pellet.

Compare this to a typical round nose pellet with a BC of 0.030, at over 15 inches of drift, even though they all started at 900 fps, and you can see why slugs are so superior for shooting in wind.

You might think that since slugs have much lower drag, it would make sense to shoot them at much higher velocities, including Supersonic. It turns out that is NOT the case. Check out the ChairGun chart below, for an average slug with a BC of 0.100 in the same 10 mph crosswind: 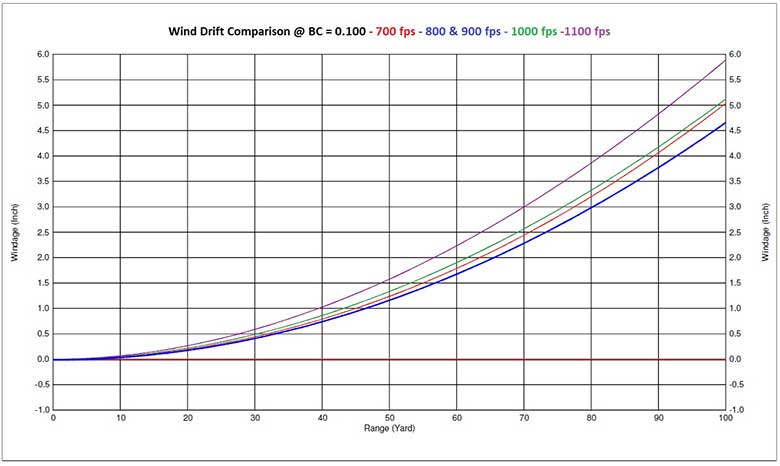 Yet again, at 900 fps and above (called the Transonic region), the drag of the slug increases quickly, so the lag time increases, and with it the drift. As with pellets, instead of trying to increase the MV, we should look to the BC to decrease the drift.

The Velocity “Sweet Spot” for Slugs In Airguns.

Following on with the above facts about how velocity affects the wind drift, there must, therefore, be an optimum velocity for any given slug at any given range, to have the least possible wind drift.

For most of you this will be quite a revelation, but it is absolutely true. The chart below shows the drift in a 10 mph crosswind at 200 yards, for a variety of BCs: 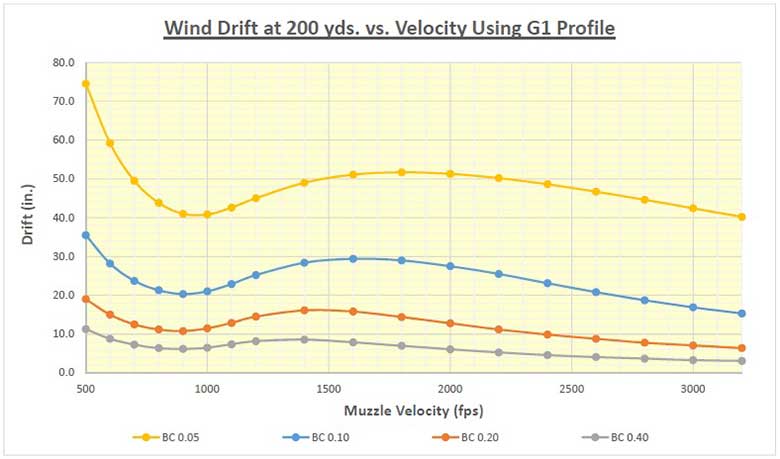 The drift was calculated using ChairGun. Note that the least wind drift occurs when starting with a muzzle velocity of about 900 fps, and increases when the MV is either slower or faster.

This chart is quite a shock to most slug shooters. It shows an increase in drift of about 10% by increasing the MV from 1000 fps to 1100, and an even greater increase above that. Combined with how much more air it takes to reach 1100 fps, if shows that even for slugs there is little point striving for much over 1000 fps.

As with pellets, it shows the extreme advantage in terms of a reduction in wind drift from a higher BC, particularly going from a BC of 0.100 to a BC of 0.200 (half the drift).

Next month I will be looking in detail at how the wind at various parts of the range affects the drift at the target. You may be in for a shock!

PS. Check out HAM’s recent comparison test of shooting slugs and pellets. This shows some experimental data on shooting both types of ammunition using a Huben K1 air rifle. – Editor.