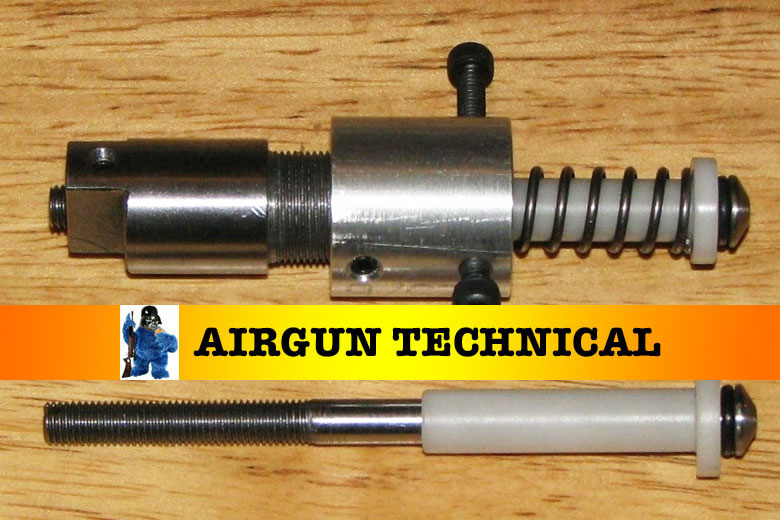 In my previous article I covered how changing the port size can be used to control PCP power. That also gave a method to get a rough idea of the maximum FPE you might achieve with a given combination of caliber and port size, barrel length and pressure in a PCP airgun.

In this article we will look at the other major way to alter or control PCP power – namely the hammer strike.

In most PCPs the valve is opened by being struck by a hammer or striker, propelled by a compressed spring. As I mentioned previously; to obtain maximum power, the valve must stay open until the pellet leaves the muzzle. Unfortunately, that wastes a large amount of air.

Manufacturers, realizing this, often fit a hammer spring that isn’t strong enough to reach maximum power, or is adjusted to avoid wasting that much air. Some, on the other hand (Big Bore manufacturers are often guilty of this) fit a heavy hammer spring to maximize the power, resulting in an “air hog”.

Only relatively recently have some manufacturers started to provide some adjustability for the hammer strike, to allow us to “tune” or control PCP power to our needs.

Fortunately, in most cases, it is not too difficult to make a “rear velocity adjuster” (aka power adjuster, or RVA). This allows us to change the hammer spring preload, and therefore PCP power output of the gun. Here is one such device I made myself. It’s for the common “Disco” or 22XX series guns by Crosman.

Here is the RVA above disassembled so you can see the component parts. 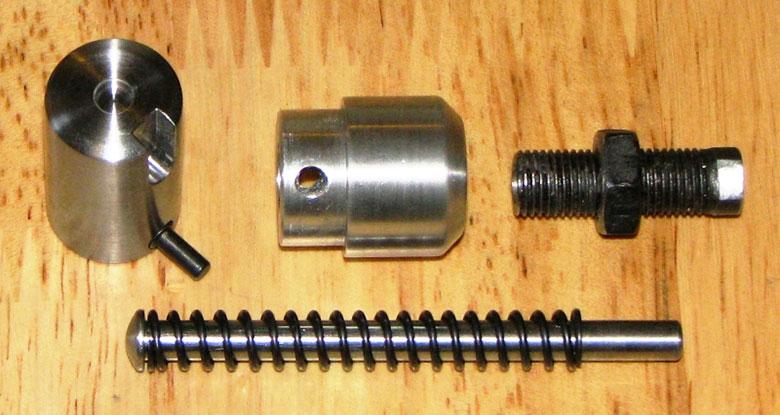 Top row on the left is the hammer (with cocking pin), next a new end plug for the main tube (drilled and tapped for the adjuster), and on the right the preload adjusting screw with locknut.

Below is the hammer spring, in this case riding on a spring guide which slides through the hollow adjusting screw. The end projects through the back when the gun is cocked, giving a visual “cocking indicator”, a nice safety feature.

So, what happens when we change the hammer spring preload?

Basically, more preload accelerates the hammer more, so that it is going faster when it hits the valve stem. This causes the valve to both open further (lift), and stay open longer (dwell).

The diagram below may help you visualize this relationship. 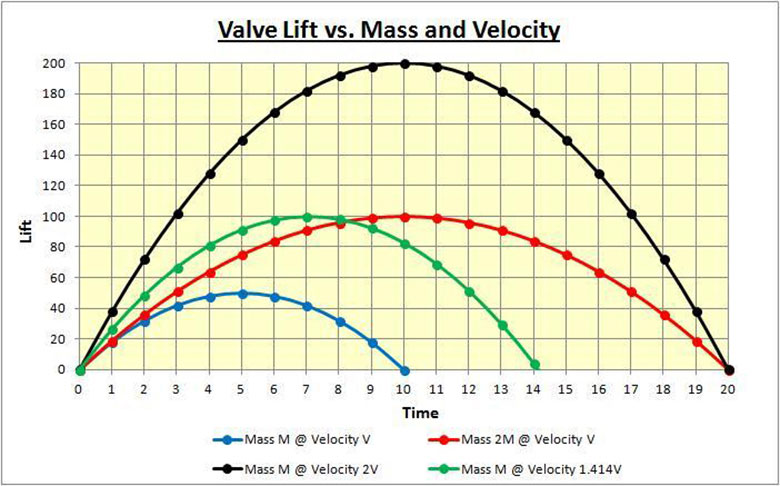 There are two important components to the hammer strike: the mass of the hammer, and the velocity when it hits the valve stem.

The blue line above is the starting point, hammer of mass M, having velocity V. If we increase the spring enough to double the velocity to 2V, we end up with the black line. The valve is opening four time as far, and for twice as long.

The area under the curve, which represents the amount of air the valve might flow, is eight times as great (not strictly true, as the ports may not permit this).

If instead of doubling the velocity we double the weight of the hammer to 2M (and add enough spring preload to keep the hammer velocity the same), we end up with the red line.

Now the valve lift is twice what we started with, and the dwell is twice as great, so four times the area (and airflow) we started with. The green line is just another example, with a different combination of hammer mass and velocity.

Yeah, but how do we use that to tune?

OK, so here is the key to all of this stuff about hammer strike as a way to control PCP power. When we alter the pressure inside a PCP, it changes how hard we need to propel the hammer to open the valve for maximum power. Here is a perfect example of that. 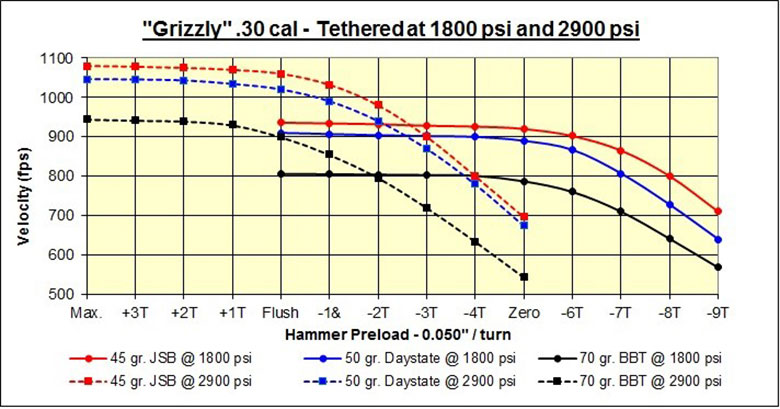 The solid lines are with the gun tethered at 1800 psi, while the dotted lines are at 2900 psi. The red lines are using 45 gr. JSBs, the blue lines with 50 gr. JSBs, and the black lines with 70 gr. cast Bob’s Boattail bullets.

The horizontal axis on the graph is the hammer spring preload, more to the left, less to the right, and each data point is one turn on the RVA.

There are several important things to note on that graph.

First, for all six lines, there is a velocity “plateau” where adding more hammer spring preload does NOT increase the velocity. This is because the pellet is reaching the muzzle when it gets to that velocity. Adding more preload will, however, waste more air because the valve will stay open longer after Elvis has left the building.

Second, for each pellet, more pressure results in a higher plateau velocity, just as you would expect, and heavier pellets don’t reach as high a velocity as lighter ones (although their FPE may be greater).

Third, as you increase the pellet weight, the amount of preload required to reach the beginning of the plateau increases slightly. This is because heavier, slower pellets require a longer dwell to still be receiving air from the valve when the reach the muzzle (because they spend longer in the barrel).

Note that the above applies to all PCPs, regardless of operating pressure, regulated or un-regulated. If you have enough hammer strike, you will be able to find a point where the velocity plateaus. That is the maximum for that gun and pellet, with that porting and barrel length, at that pressure.

When tuning to control PCP power, the FIRST thing I do is look for that plateau. Once I know that, I know where to go with my tuning process.

Hopefully now you understand the basics of how hammer strike relates to pressure. If you have more pressure, you need more hammer strike to get maximum power.

What happens when you then back off on the hammer spring preload? This happens… 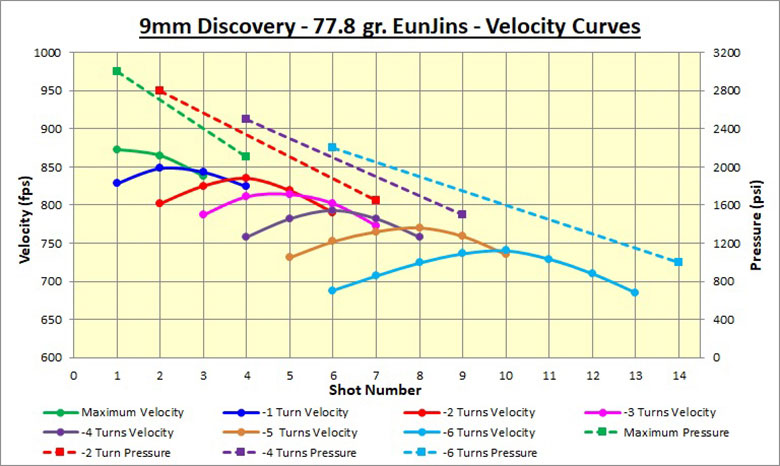 At maximum preload, each shot has less velocity than the previous (green line), and the gun is using so much air I only got 3 shots within a 4% Extreme Spread. The pressure dropped from 3000 to 2100 – that’s 300 psi/shot.

The trend is clear. As you reduce hammer strike, you lose peak power, and you can’t fill to as high a pressure to maintain a usable velocity spread. However, you get more shots, and use less air per shot.

This is the basis for tuning an unregulated PCP, you balance hammer strike against fill pressure to get the tune you desire.

So can you control PCP power for regulated guns?

Actually, with a regulated PCP, your job to control PCP power is simpler, because the pressure is fixed (until it drops below the regulator setpoint).

All you need to do is tune to about 3-5% below the plateau velocity (on what I call the knee of the curve) for the best balance between power and efficiency.

Why there? If you tune on the plateau you are wasting air. If you tune about 10% below the plateau, you will create a gun where the velocity increases below the setpoint, because down there the gun is unregulated and is creating a bell-curve. 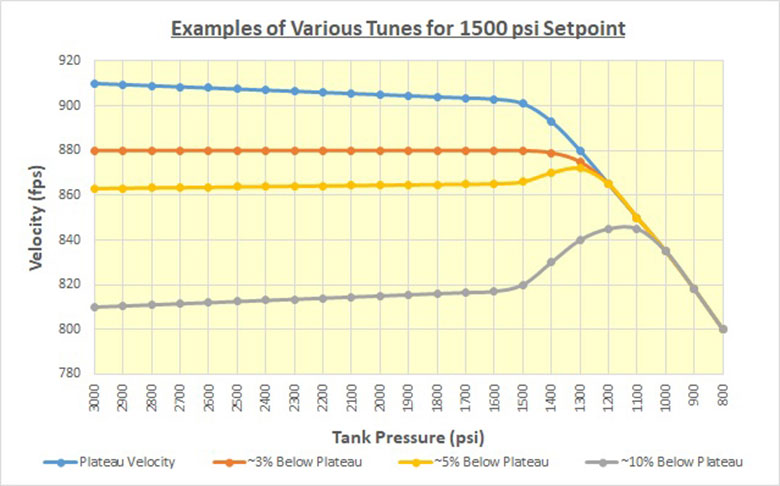 The chart above shows what your shot string will be like depending on how far below the plateau velocity you tune a regulated PCP.

Yes, tuning well below the plateau (10% or more) will give you wonderful efficiency, but will create two problems. The grey line above shows the primary one, where you will get a bump in velocity below the setpoint (like an unregulated bell-curve).

The other problem is that with the gun tuned for such a light hammer strike, it will be extremely sensitive to any inconsistency of the hammer strike, and the shot-to-shot variation tends to be high.

You will note two other things on that graph…

When tuning on the plateau, the velocity tends to drop slightly as the tank pressure declines.

If tuning 10% or more below the plateau, the velocity tends to increase slightly as the tank pressure declines. This is caused by a regulator’s natural tendency for the output pressure to follow the input pressure a bit. In both cases, a small change in output pressure can cause a noticeable change in velocity.

Why does that not occur when you tune on the knee?

Simple, you are tuned close to the top of where the bell-curve would be if the gun was unregulated. Fairly large changes in pressure make almost no difference to the velocity.

The same is true for the hammer strike.

The small variations in hammer strike that always exist make almost no difference to the velocity. Tuning to the knee not only is the best balance between power and efficiency, it also minimizes the Extreme Spread and shot-to-shot variation.

In future articles I will go into more detail about tuning to control PCP power, and how various changes affect the efficiency. In the next article, however, I plan to look at the “SSG”. If you don’t know what that is – come back next month to find out! 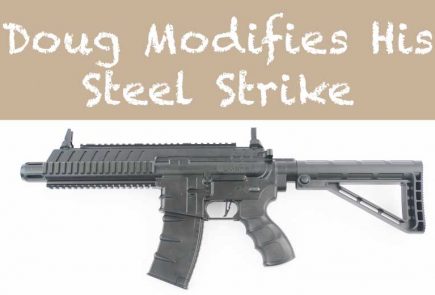