Wind Drift For Airguns – It’s Important Where The Wind Is! 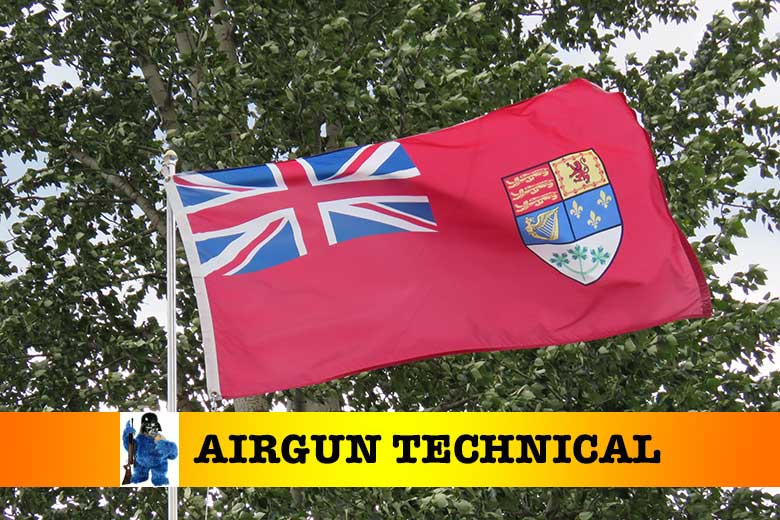 In this post, Bob explains why – contrary to popular opinion – the biggest component of wind drift for airguns is nearest to the muzzle.

As we have seen in the previous two articles, the amount that a pellet or slug (aka bullet) moves sideways in a crosswind is affected mostly by the Ballistic Coefficient (BC). It tends towards a minimum at 850-950 fps, depending on the range to target and the BC.

Slugs have a higher BC than pellets, so they have less overall wind drift.

The other major factor in wind drift is, of course, the wind direction and speed.

A headwind (12 o’clock) slows a pellet slightly and may cause it to hit slightly low. A tailwind (6 o’clock) causes it to slow less and hit slightly high. But side winds, and the sideways drift, are the subject of this article.

Note: for consistency in all the diagrams, I have used a 10 mph crosswind, a range of 100 yards, and a BC(GA) = 0.046 that produces 10 inches of drift at that distance at a MV = 900 fps. The charts were developed using ChairGun. A lower BC would have more drift, and a higher BC, less drift.

Most of you will be familiar with the diagrams of wind drift vs range for a crosswind of equal speed from muzzle to target. Most ballistics calculators only allow for this type of crosswind data, and produce drift data and a diagram like this one: 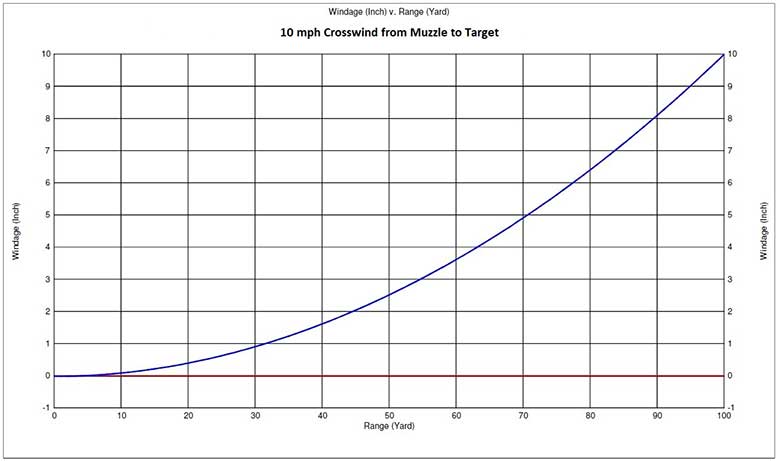 You will note that as the pellet travels downwind, the drift increases, as expected.

The most important thing here is that when you double the distance, you get four times the drift.

For example, a pellet having 10 inches of drift at 100 yards will only drift 2.5 inches at 50 yards. That fact is key to understanding the importance of wind drift at longer ranges.

What Happens When the Wind Stops?

I don’t know how many times I have read opinions from shooters that the wind closest to the target is the most important. Their reasoning is that the pellet is traveling slower, so the wind has more effect.

What they fail to take into account is that once the pellet is deflected by a wind near the muzzle, it is now traveling at an angle to the line of sight. Even if there is no wind downrange, it continues to get further off target, like this: 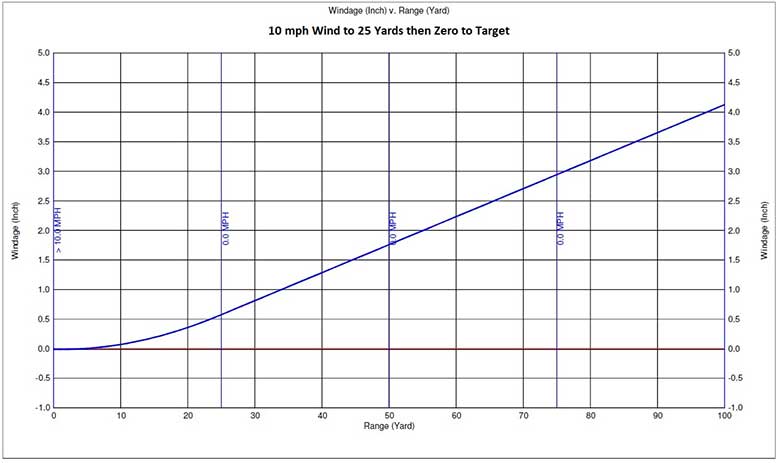 As you can see, even though the wind quit at 25 yards, the pellet path was already deflected, and the distance from the line of sight continued to diverge all the way to the target. If the wind was steady out to 50 yards, and then no wind from there to the target, we have a similar situation: 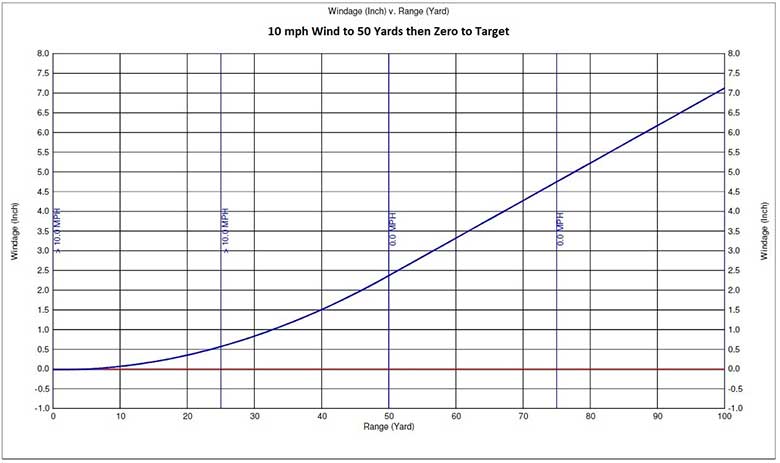 Note that the pellet in that last diagram would hit 7.1 inches off target, compared to 10 inches if the wind was constant all the way to the target.

When the Wind Reverses Downrange.

So, what happens if the wind from 50 yards to the target is reversed, and instead of coming from 3 o’clock is now from 9 o’clock? You might think that the pellet would end up hitting at the point of aim (or even as some suggest, to the right of it). However, this is not the case, as shown below: 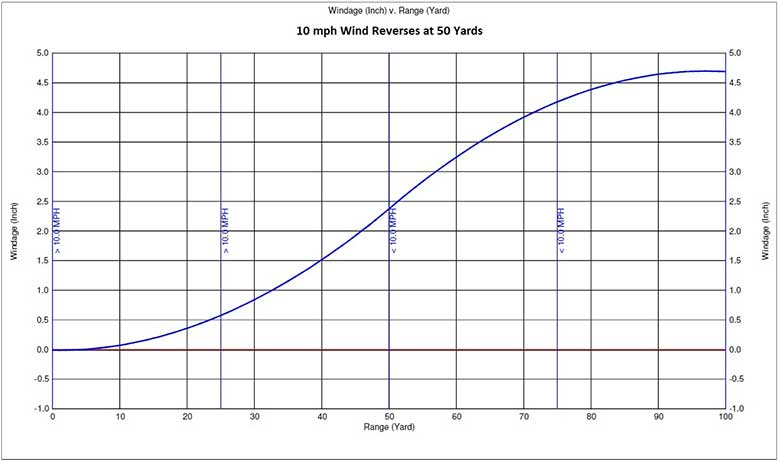 This diagram will shock most shooters. They expect the effect of the wind to cancel out, or even for the pellet to hit to the right of the point of aim, but instead it still hits left, and nearly half as much as if the wind was from 3 o’clock for the whole shot.

What happens if there is no wind at all between 25 and 75 yards, but it blows from 3 o’clock in the first 25 yards and from 9 o’clock in the last 25 yards? Conventional logic is that the pellet would hit to the right, but that is not the case: 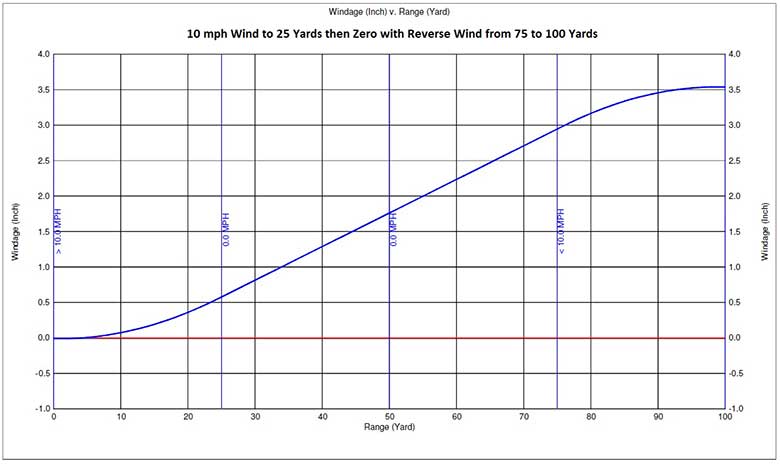 As you can see, the wind drift effect near the muzzle still predominates. The pellet hits over 3.5 inches to the left of the point of aim.

Wind Only Near the Target.

What about the situation where there is no wind except during the last 25 yards, nearest to the target? You might expect that to cause you to miss more than if the wind was only present in the first 25 yards, but that is clearly not the case: 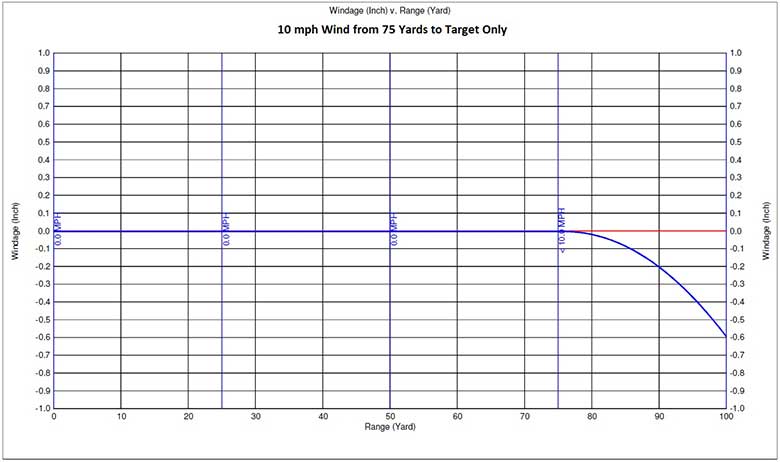 Compare this to the second diagram above, where the wind was only present from the muzzle to 25 yards. That caused a miss of 4.2 inches, or nearly 7 times as much!

This should permanently put to rest the concept that the wind near the target is the most important. Clearly, the wind near the muzzle has the greatest effect on the wind drift, since any deflection in the course of the pellet or slug acquired there is carried all the way to the target.

Think back for a minute to the last two articles about the effect of velocity on wind drift. Remember that the deflection is proportional to the lag time?

At velocities in the Transonic range (over 900 fps), the drag is much greater, so the bullet slows more. That increases the lag time during that part of the flight. That is precisely the part of the trajectory where the wind also has the most effect, near the muzzle!

It then follows that if you are shooting with a muzzle velocity in the Transonic range, and if there is a crosswind near the muzzle, you increase your chances of a miss.

Bump the velocity up close to Mach 1, let’s say 1100 fps, where the pellet is losing a huge percentage of its velocity in the first 10 yards, and any crosswind in that first 10 yards will play havoc with your POI. Now you really have wind drift on steroids!