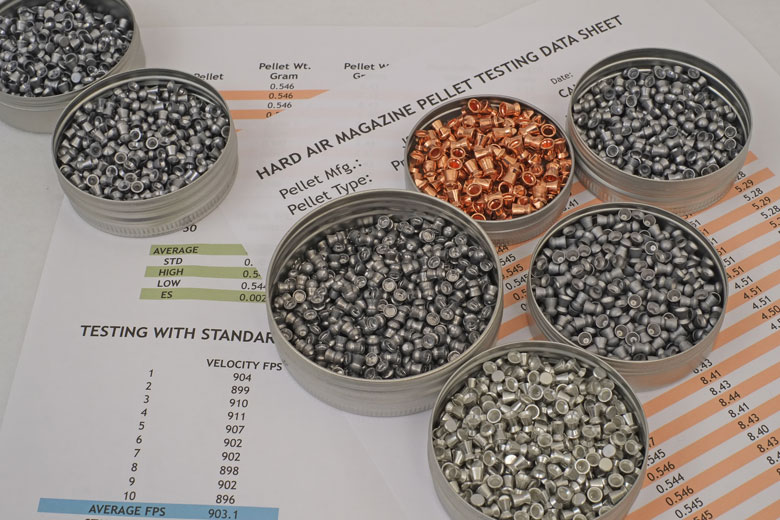 Hard Air Magazine Pellet Test Reviews are the latest type of review to be included in HAM, starting in April 2017.

Pellet test reviews are not common. This is because they are very difficult to do well. That’s why it took us over 2 years to work out the HAM Pellet Test methodology!

Basically pellet accuracy due to the quality of design and manufacture of each pellet, combined with the level of quality control the company undertakes. This is real pellet quality.

In order to understand real pellet quality, it’s necessary to test “pellets as pellets” and NOT as part of any complete shooting system. Isolating pellets from the shooting system requires a different approach.

So, for the first time ever, Hard Air Magazine Pellet Test Reviews test “pellets as pellets” and not as part of a shooting system.

HAM pellet test reviews use a consistent, structured methodology. They are are based on hard data. The core of this data is a comprehensive, detailed range of measurements for a statistically-significant sample of the test pellet. This means that, like other HAM test reviews, it’s easy to compare one type of pellets against another as they have been tested under identical circumstances.

For pellet weight measurement, HAM uses laboratory-grade scales that are consistently able to measure to an accuracy of one Milligram. One Milligram is 0.015 Grains or 0.0000035 of an Ounce. Wow! This means that we can accurately measure not just pellets, but also the weight of lead dust in a tin!

Below. This graph shows how muzzle velocity varies with nominal pellet weight when fired from the Beeman 1074 pellet test air rifle. Both .177 and .22 caliber pellets are included. As you can see, there’s no variation due to caliber, but pellet weight only. The red dots show individual Muzzle Velocities, the “trend line” is in blue. 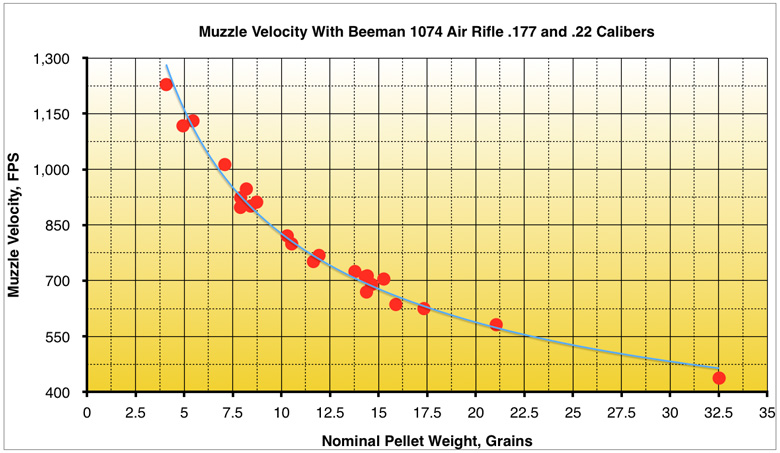 All HAM pellet test reviews include a shooting test. For .177 and .22 calibers his is undertaken with a Beeman Model 1074 air rifle. Why? Well, this popular springer represents the typical “1,000 FPS breakbarrel air rifle” that’s by far the most popular airgun sold in the USA. This means that our test results will be useful to the widest possible range of HAM readers.

Also, the Beeman 1074 has a huge benefit for pellet testing. Changing calibers requires only removing one barrel and replacing it with another. There’s no seals to be re-seated or changed, nor does any part other than the barrel need to be changed. This means maximum consistency of results. It also allows .177 and .22 caliber pellets to be compared exactly to each other in HAM pellet test reviews.

Using the same air rifle for every pellet test review allows “pellets to be tested as pellets”. It does not make HAM Pellet Test Reviews applicable only to the Beeman 1074 air rifle. Actually, it takes away the airgun as a source of variation from our tests and allows us to isolate the pellet from the complete shooting system. This means better results as HAM pellet test reviews can be compared to each other, ignoring the specific air rifle as the source of variations.

The diameter of the bores (over the lands) for this gun are 0.176-in (4.70 mm) for .177 cal and 0.215-inch  (5.46 mm) for .22 caliber. These are representative values for a number of air rifles measured by the HAM team. While we’re so concerned with pellet head size, we need to also remember that the bore diameter of individual airgun barrels also varies. This is yet another factor determining accuracy that is not a factor of the pellet alone!

Below, the test pellet is shot into a consistent bar of soap to determine penetration and trajectory in a soft target. 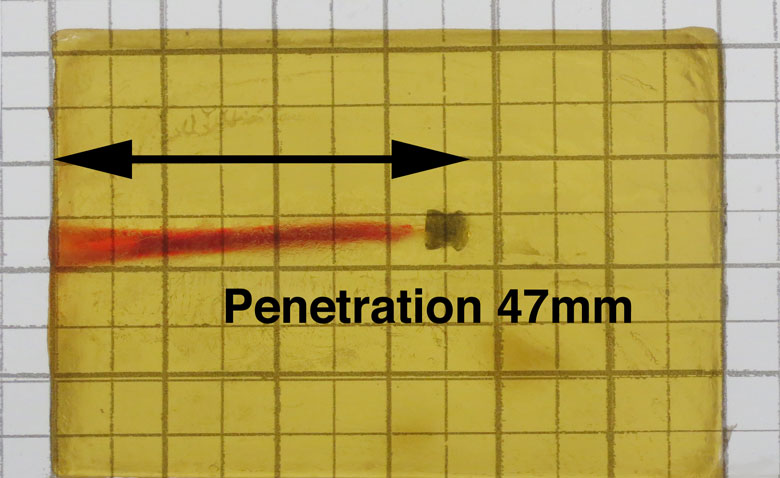 Below, a sample ChairGun graph showing how point of impact varies for a specific pellet between 10 and 60 yards range.

ChairGun does, however, require that Ballistic Coefficient for the pellet be known.

But we’re using Ballistic Coefficient in HAM Pellet Test Reviews because it’s widely used and gives results that are very close in practice to actual pellet performance downrange. There’s not – in the HAM Team’s opinion – a really viable alternative.

Why No Accuracy Test?

We all know that there is no such thing as a “perfect pellet” that’s accurate in every airgun. Just looking at the numerous HAM airgun test reviews makes that clear. Each individual airgun has its own specific pellet preference.

The few other pellet reviews typically make accuracy an important part of their test. But – as we’ve just said – the same pellet will give different accuracy when fired from different guns.

In fact, accuracy is not a valid test parameter for pellets at all!

This is because on-target accuracy is the product of multiple factors. These include the pellet, of course, but also the gun it’s shot from, the scope or sights on the gun, the weather or other environmental conditions and – most of all – the shooter him/herself. In other words, accuracy is the result of the complete “shooting system” and not just the pellet.

But it’s clear, of course, that some types of pellets are more likely to be more accurate in more airguns than others. Again, we know this from the numerous HAM airgun test reviews. Pellet quality and consistency is the reason and that’s what we are testing.

Of course, there’s a lot more to HAM Pellet Test Reviews than this. But I hope these words give an clear overview of the efforts we’ve taken to make the best possible test reviews of “pellets as pellets” and why they’re of use to you!

During the long gestation of this project, a number of people have given considerable support and input. I’d like to thank them publicly for all their help and encouragement. They are:
– Dick Dixon of Predator International.
– Pavel Kolabec of JSB.
– Yvonne Jenkins of Hawke Optics.
– HAM Air Pistol Tester Doug Wall – who’s also the primary, specialist HAM Pellet Tester!