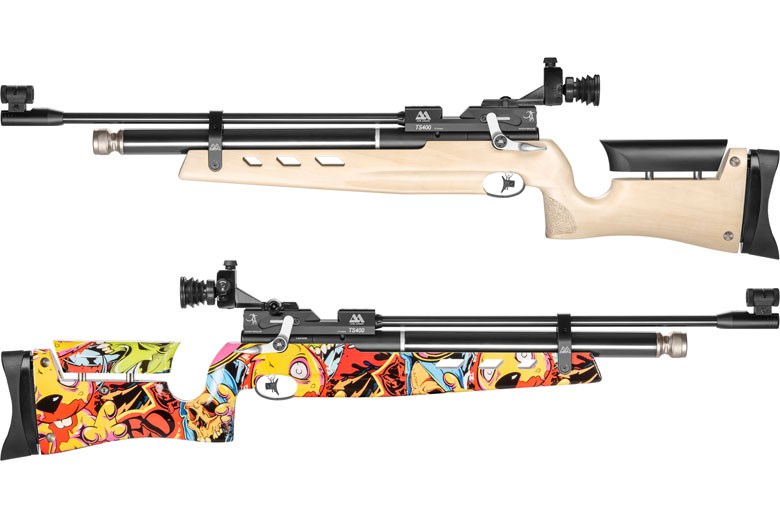 The Air Arms TS400 has been introduced by the UK manufacturer as a dedicated design for use in Target Sprint competition.

Target Sprint is a biathlon-type competition. Competitors normally run 400 Meters three times, interspersing each run with making 5 shots with an air rifle at knockdown targets. That’s a total of 1200 Meters running plus 10 shots.

Target Sprint was introduced by the International Shooting Sports Federation (ISSF) in 2013. You can find out more about it at targetsprint.com.

The company says that the Air Arms TS400 has been developed in conjunction with the talented Target Sprint coaches and organizers at British Shooting. It’s specifically designed to help athletes achieve faster shooting times when competing in the exhilarating Target Sprint shooting discipline, they say.

The single shot TS400 air rifle includes Air Arms new cocking system. This allows for a more fluid re-load movement so that the athlete never has to take their eyes off of the target, says the company.

Air Arms claims that Target Sprint competitors will be able to successfully hit the target in a much faster time and move onto the next sprinting stage of the course.

The stock is manufactured from poplar. Air Arms says that fully-dipped stocks are available at an additional cost.

Of course, Air Arms is no stranger to manufacturing competition-specific air rifles. The S400 Biathlon Rifle is one example. The TS400 looks to be very similar, except having a single-shot action with the new cocking system.

The Air Arms TS400 is available now in the UK. HAM has no information about availability yet in other countries.