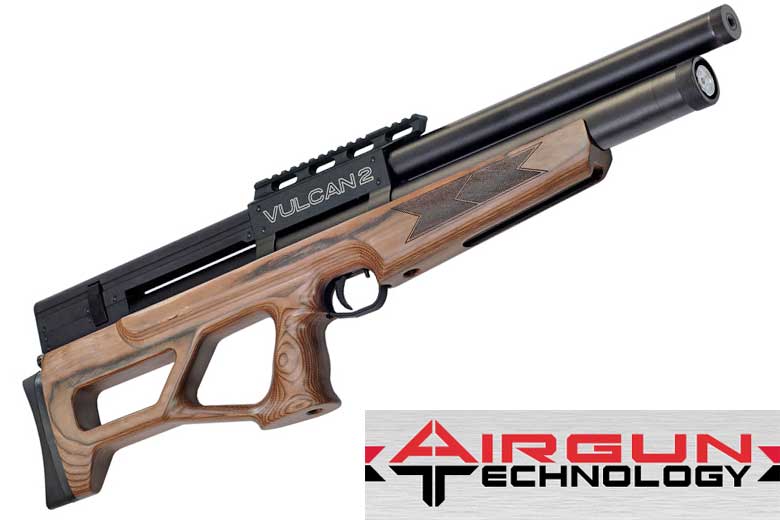 Airgun Technology is a Czech company. They manufacture the  range of Vulcan 2 PCP air rifles. You can see the HAM report about them from the 2019 IWA Outdoor Classics show in Germany.

Now the Vulcan 2 PCP range is becoming available in the USA from Airguns of Arizona. It’s a bullpup design that’s equipped with a magazine pellet feed and shrouded barrel.

The action is operated by a sidelever which can be changed from right to left side by the owner.

Unusually, the factory configuration is to have the sidelever on the left side of the gun (seen from the rear). This allows a right-handed user to cycle the action without having to move his trigger hand if the gun is supported on a bipod.

The .22 caliber version has a 12-shot rotary magazine and gives a maximum Muzzle Energy of 32 Ft/Lbs with around 55 consistent shots per fill of the built-in 300 cc HPA tank.

In .25 cal, there’s a 10-shot magazine. Maximum power is up to 45 Ft/Lbs. Around 45 consistent shots per fill are available in this caliber.

There’s a choice of stock materials. The Vulcan 2 is available in walnut or with a laminated wood stock. There’s also a synthetic stocked version available for those who prefer the black look and prefer utility in a hunting air rifle.

In addition, there’s a “Tactic” version that shortens the length by nearly 6-Inches and reduces the weight by about half a Pound. Performance of the Tactic is said to be indistinguishable from that of the “full length” bullpup model.

All models come in a hard plastic case and are supplied with two magazines. The Vulcan 2 is also manufactured in .177 cal and .30 caliber, although AoA lists only the .22 and .25 caliber versions at the time of writing.

However the .30 cal model is the subject of Jared Clark’s video review (below) and you can see that this gives around 30 consistent shots per fill for 70 Ft/Lbs Muzzle Energy.