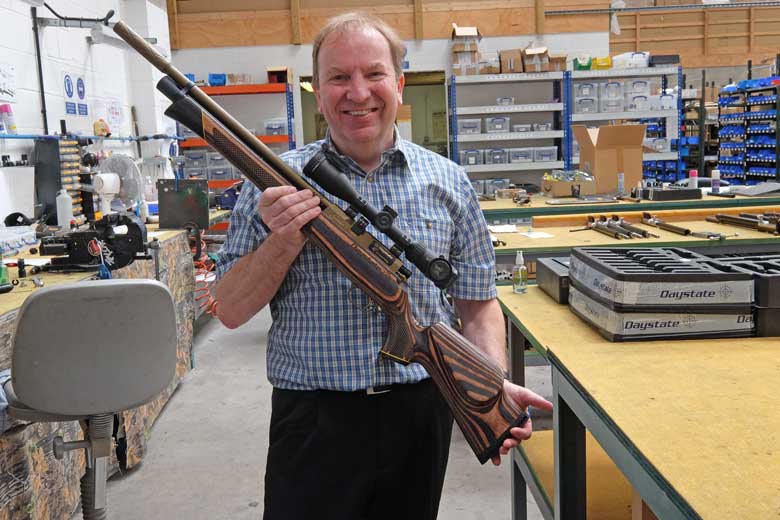 The Daystate Genus Limited Edition air rifle was manufactured to commemorate 40 years from the inception of the British company. In the USA it’s available from Airguns of Arizona in .177 caliber, .20 – yes you read that right! and .25 calibers.

The Daystate Genus is based on the HR Huntsman Regal. The Huntsman design was chosen for this commemorative edition as it has been – in multiple versions – the company’s longest-running air rifle model.

It includes the company’s Harper slingshot hammer system, together with a Huma regulator for shot-to-shot consistency. Muzzle Energy for the .25 caliber versions is up to 40 Ft/Lbs.

Last year, HAM Publisher Stephen Archer visited Daystate in the UK. He saw some Daystate Genus models being assembled at that time. Let’s take a look at this exclusive view now…

Our heading photograph above shows Daystate’s Tony Belas looking justifiably pleased with this new model. He’s standing in the Daystate factory which is located at Eccleshall – that’s roughly in the center of England.

Daystate builds its air rifles to order from its dealers and distributors. Obviously, AoA is a huge customer for Daystate. So it was not surprising to see a batch of Genus receivers lined-up with stickers designating that they were being manufactured for shipment to the USA. 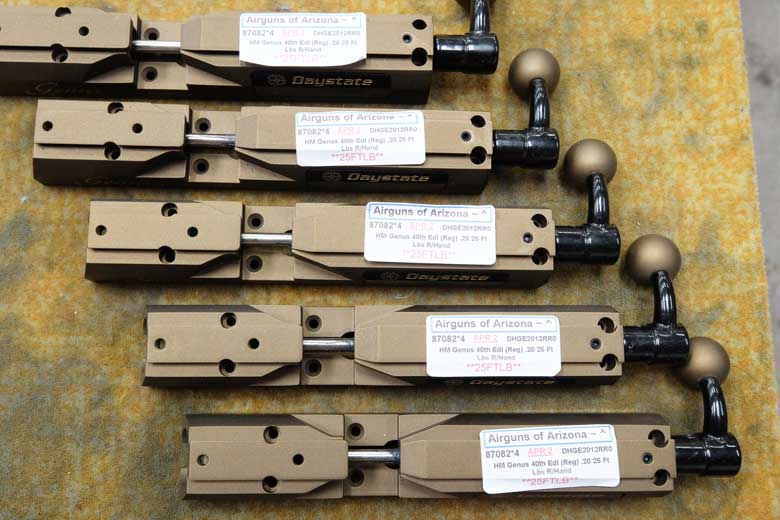 Assembled actions are stored in custom racking at various stages of the manufacturing process. For example, actions are leak-tested by filling with High Pressure Air and leaving to stand to ensure there’s no leakage over a specified time frame. 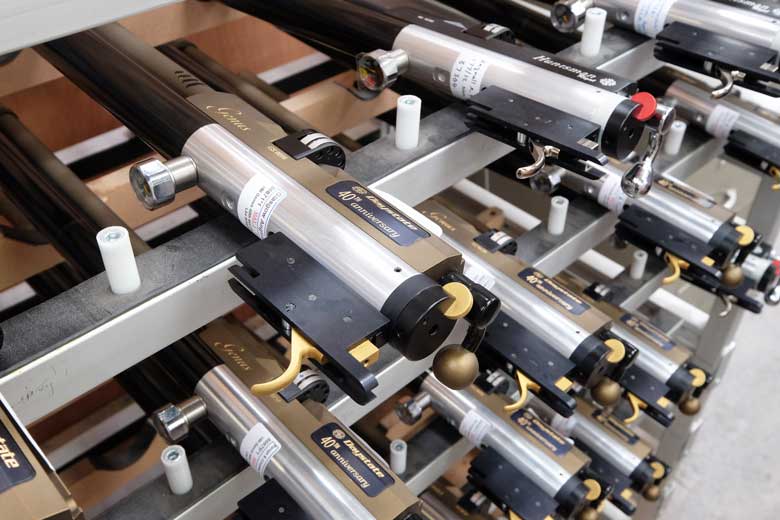 The beautiful stocks for the genus were manufactured by the Italian specialist stock manufacturer Minelli. Here’s how they look in the packaging as received at the Daystate factory. 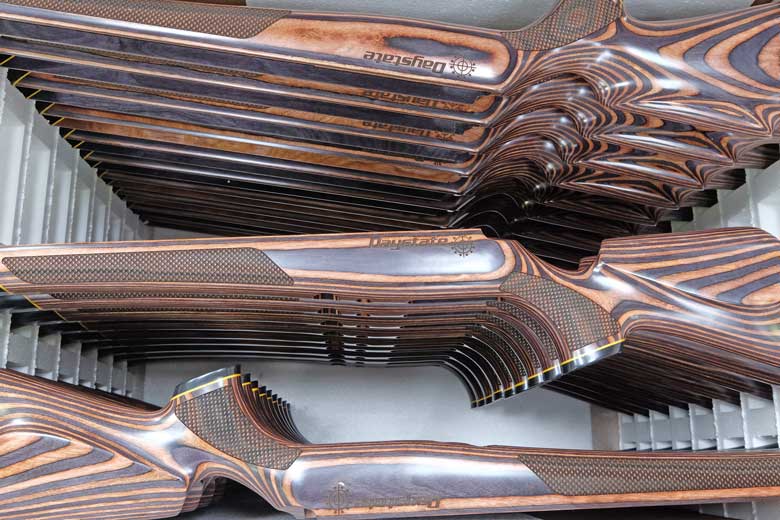 Production of the Genus was limited to a total of just 200 units for worldwide sale. Each gun manufactured is supplied with a certificate of authenticity confirming its serial number. The certificate is included with a specially-produced book describing the history of the company. 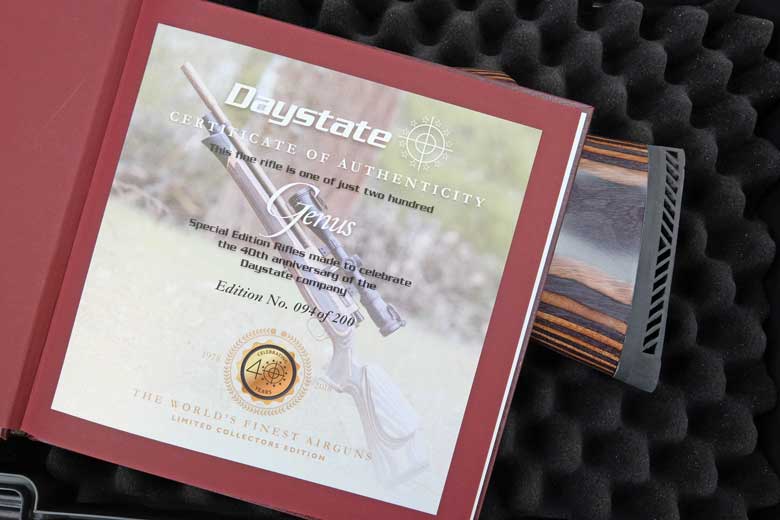 Below we see a completed Daystate Genus air rifle just prior to shipment.

The gun is supplied in a high-quality synthetic case, together with the book, certificate, fill adapter and a range of documentation. There’s a 10-shot magazine and single shot tray included, of course. It’s a beautiful presentation!

Commemorative plaques are fitted to both the side of the breech and the black pistol-grip cap. 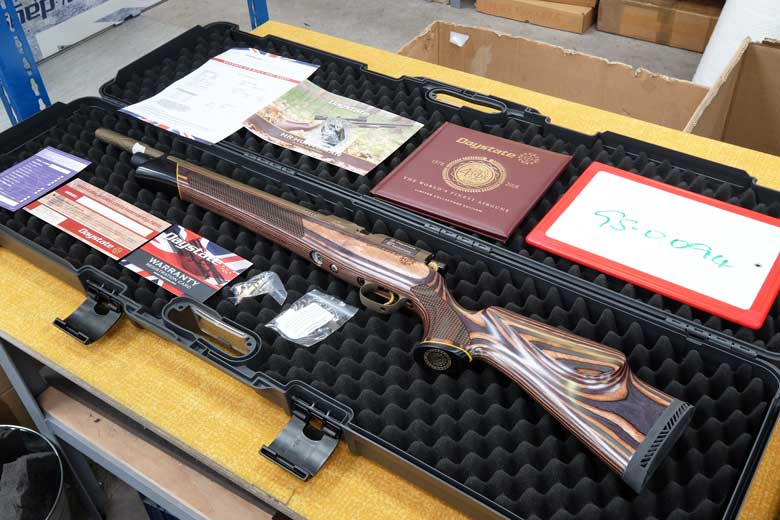 To have your own part of Daystate history and tradition, a Genus is the ideal choice! Airguns of Arizona has a few guns still available. But when they’re gone, they’re really gone…

Buy From AIRGUNS OF ARIZONA