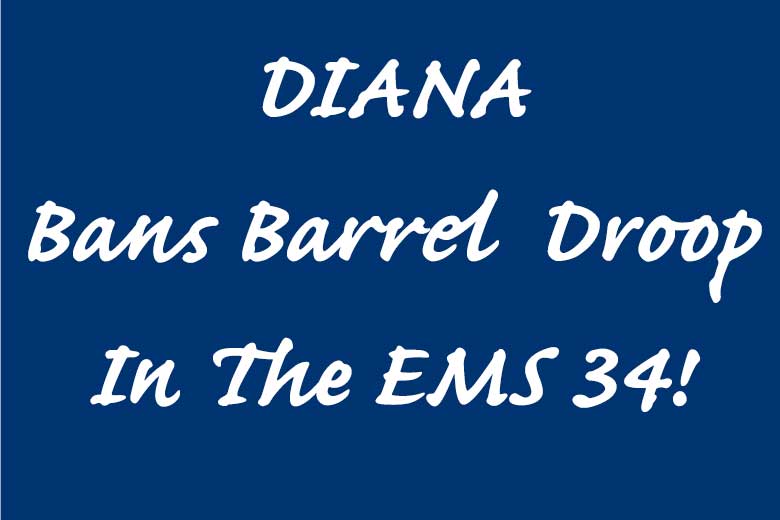 For many years, “barrel droop” has been a problem for breakbarrel air rifle shooters. Now Diana 34 barrel droop issues are a thing of the past with the new Model 34 EMS.

So what is barrel droop?

It’s the phenomenon whereby the barrel does not lock-up completely parallel and true with the compression tube. This can be “built in” to the gun from new, or it can happen with time, wear and use. And – to be clear – it can happen with breakbarrel air rifles, whether spring/piston- or gas ram-powered, from ANY manufacturer.

Typically the barrel is mis-aligned downwards. The result is that the gun shoots low. Hence the term barrel droop.

Because a riflescope is mounted on the gun’s compression tube, the issue is particularly pronounced when a scope is used. Traditionally, Diana 34 barrel droop has been addresses by an aftermarket compensation mount, such as Leapers’ well-known UTG DNT06 Scope Elevation Compensation Mount. 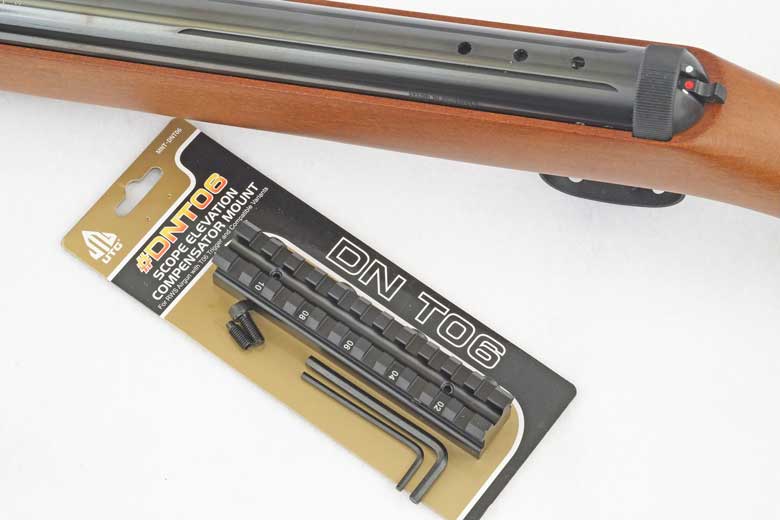 The DNT06 compensation mount fits the dovetail rails machined in the compression cylinder. A riflescope is then mounted on top of this. Because the rail itself has a built-in angle, it provides an immediate 10-Inches of upward compensation at 30 Yards. 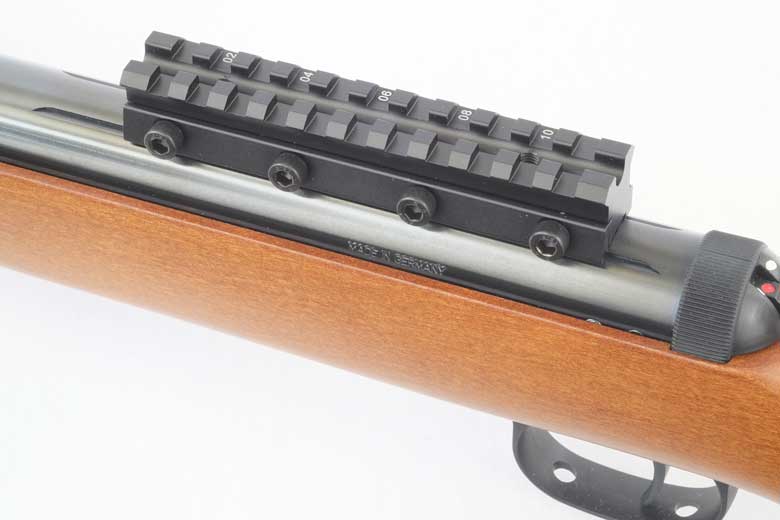 So the Leapers DNT06 compensation mount provides an excellent proven result that eliminates barrel droop in all types of “Model 34” – and other – breakbarrel air rifles using the T06-type trigger. It’s a solid and reliable solution – however it does have one disadvantage.

Inevitably it results in the scope being mounted higher on the gun, with detrimental results to cheek weld. And – of course – it would be better if the gun itself did not need such a corrective mount!

Not only does this allow the factory to eliminate barrel droop during assembly, it also gives 34 EMS owners a simple way to fix the problem should it occur during use. Let’s see how easy it is to do… 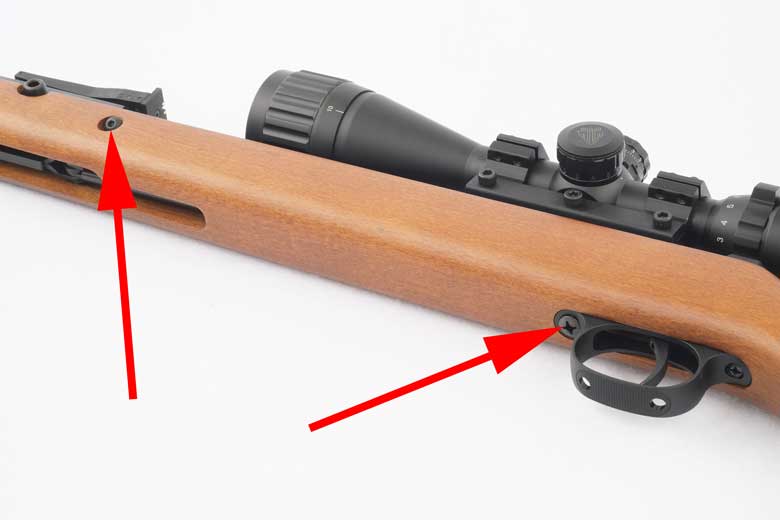 First, confirm that the gun is unloaded, is not cocked and is safe! Now the stock is removed from the Model 34 EMS by rundoing three screws. Two are either side of the barrel hinge. The third is in front of the trigger guard.

After carefully parting from the stock, the action is now available for adjustment.

“Breaking” the barrel slightly – NOT cocking it – allows the cocking lever to be pulled out, away from its location in the underside of the gun.

With the cocking lever disconnected at the rear end, the barrel alignment system can be accessed. It’s indicated by the arrow in the photograph below.

These two Torx- or star-headed screws are now visible. They can simply be removed. 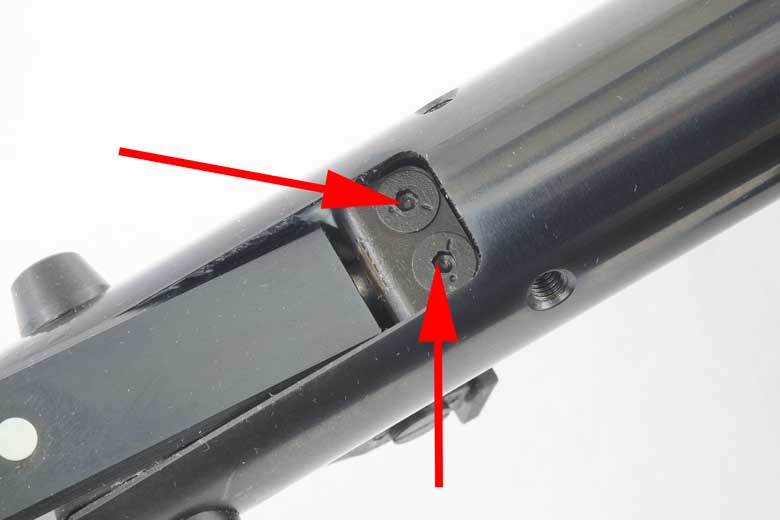 As you’ll find, the two screws secure a “lock up plate”, together with a thin shim underneath it. Actually, the gun here at HAM had two shims and the screws were secured with a “breakable” threadlocker compound, as you can see in the close-up below.

It’s these shims that provide the key to the Diana 34 barrel droop correction system. If the barrel droops downward, the gun is simply re-assembled with an additional, or thicker shim in place. Problem solved! 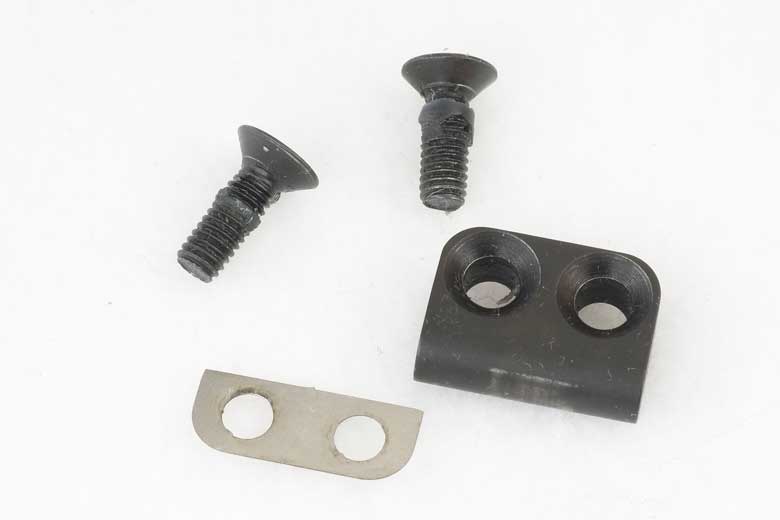 Below we see the appearance of the gun with the parts removed. 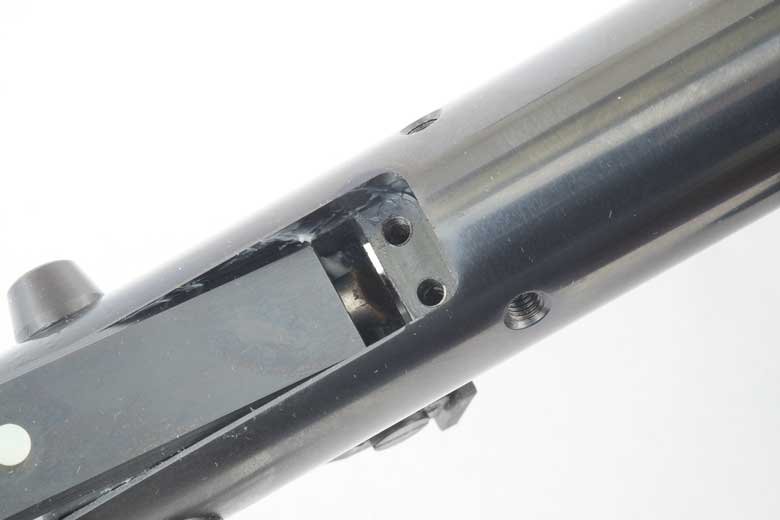 So now there’s a simple and easy way to eliminate barrel droop. But it’s only available in the new Diana Model 34 EMS.

Diana plans to make barrel droop tuning kits available for the Model 34 EMS. These will include spacer shims, an instruction manual and tools. Look for it to become available in the fairly near future. 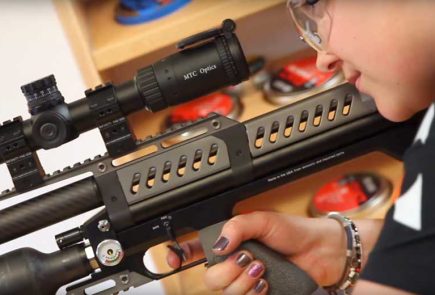 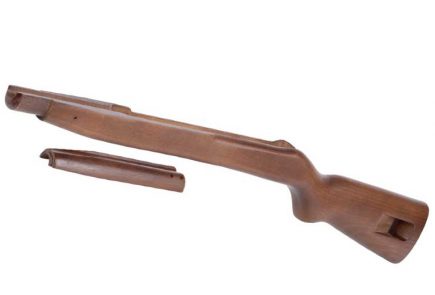