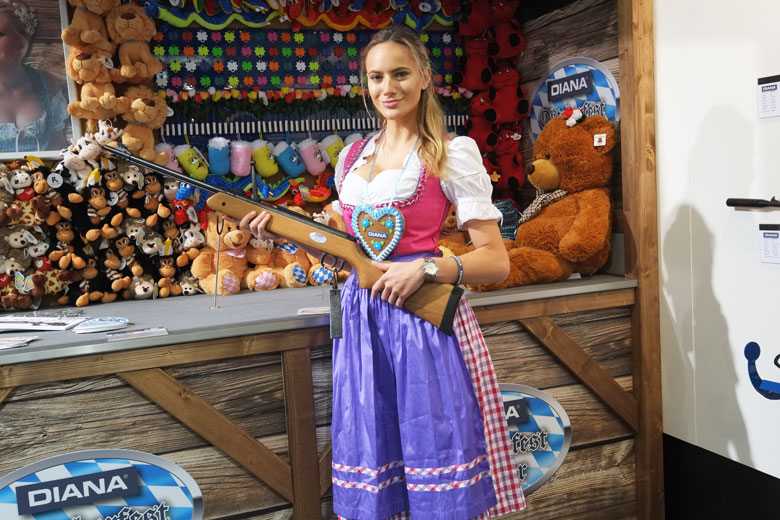 Being that IWA OutdoorClassics is held in Nuremberg, Germany, it seems only fair that we have a “Germany day” for HAM’s second report from the show! So today, we’re looking at the latest from Diana and Umarex.

The lady in our heading photograph above is holding the new Diana Oktoberfest Gewehr. That means “Octoberfest rifle” in German. This is a new recreation of a classic old Diana design that was used for shooting games at fun fairs, holidays and exhibitions.

The Oktoberfest Gewehr uses unusual 4.4 mm (yes 4.4 mm) round balls instead of the standard 4.5 mm (.177 caliber). This was so that unscrupulous competitors could not bring their own BBs from home, thus gaining an unfair advantage! 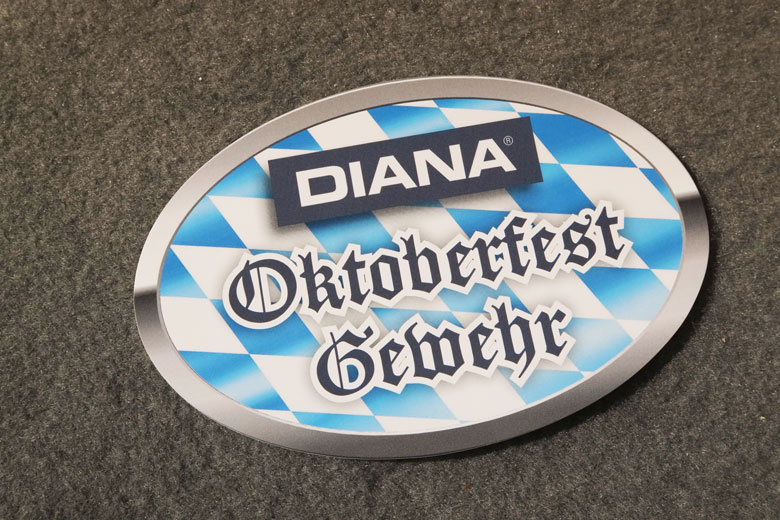 The Oktoberfest Gewehr holds 100 round balls in a tubular magazine under the barrel. It’s cocked by pulling back on a lever behind the barrel, as you can see below. This reminded me of a “Zimmerstutzen” rifle, although those were, of course, cartridge firearms. 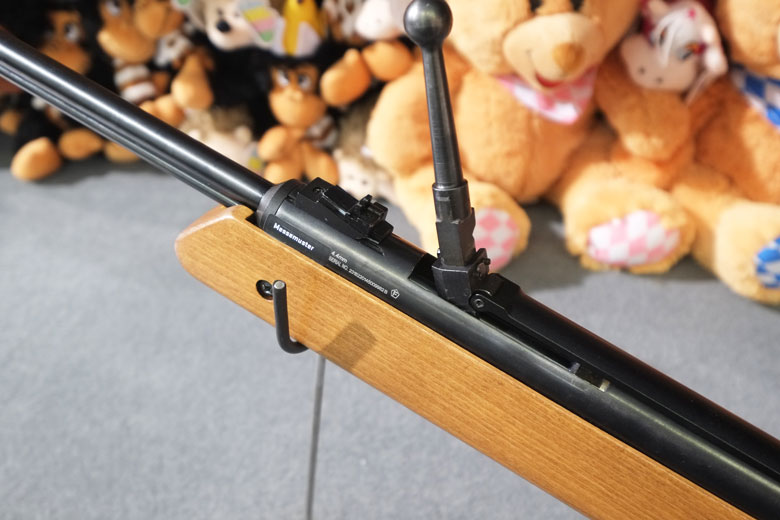 To show what a good replica the Oktoberfest Gewehr is, Diana also had an original model on hand for comparison, below. 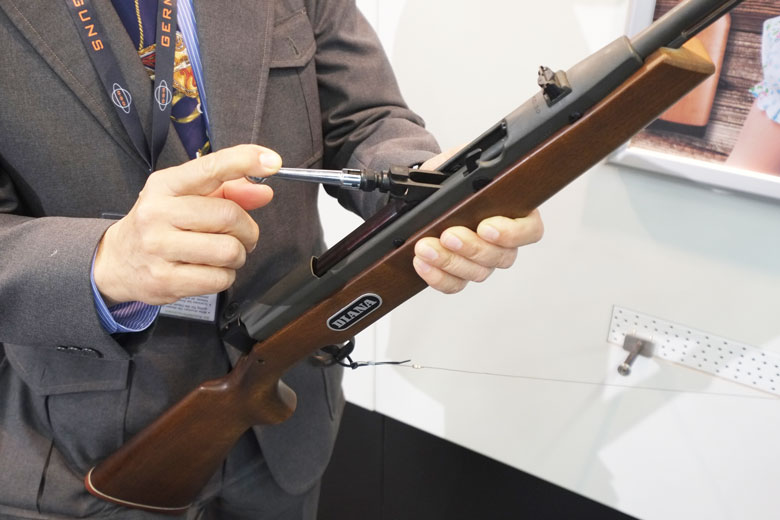 Everyone agreed that this was great fun, but both Diana and Umarex were mainly focused on rather more up-to-date new airgun products.

Diana airguns are featured on the huge GSG – German Sporting Group – booth. This is a huge area with a wide variety of airguns and firearms on display, as you can see below. 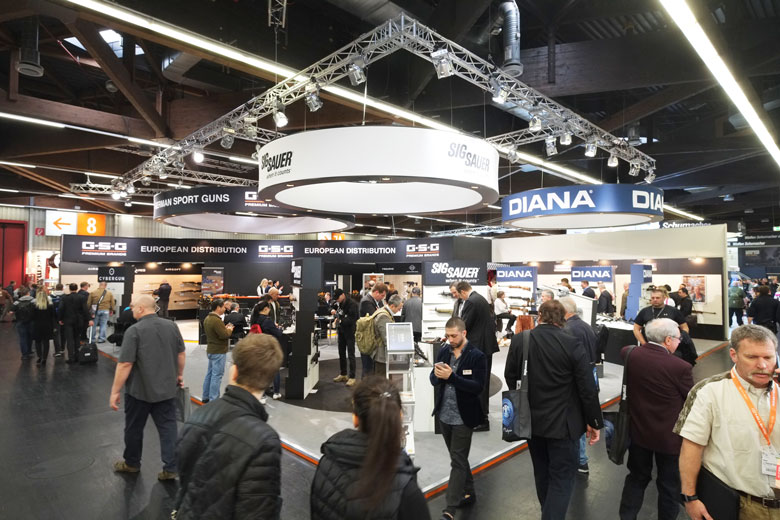 While at Diana, I was delighted to meet-up with a friendly face who is familiar to many shooters on the US and international Field Target circuit. Hector Medina kindly showed me some of the latest Diana guns.

This one, below, is the Chaser, a CO2-powered pistol/carbine. The carbine has a longer barrel and shoulder stock. Both use a 9-shot rotary magazine and are powered by two 12 Gram CO2 cartridges. Hector likes this one! 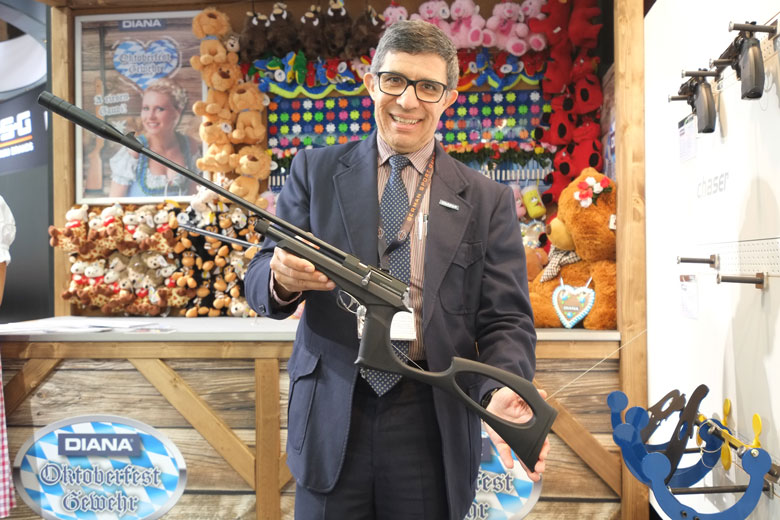 There’s also a new PCP air pistol, the Bandit. Both the Chaser and Bandit are part of Diana’s rapidly-growing Action line of products. 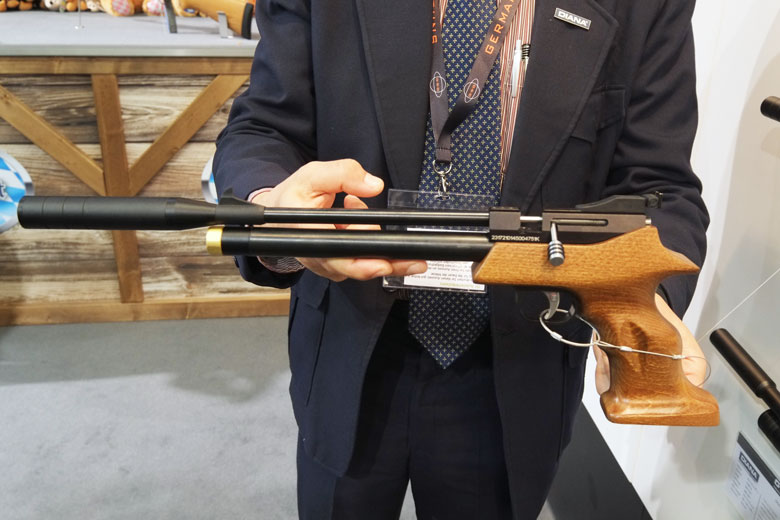 Hector obviously really, really likes the new Diana Skyhawk PCP air rifle with laminated stock! This model was launched at the 2018 SHOT Show in Las Vegas in January and HAM covered it there in more detail. 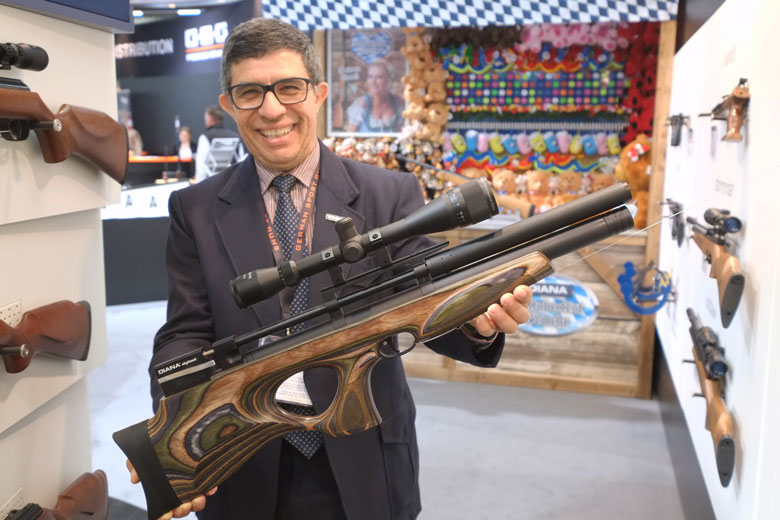 Both Diana and Umarex have massive booths at IWA OutdoorClassics. Below we see a part of the Umarex/Walther booth. 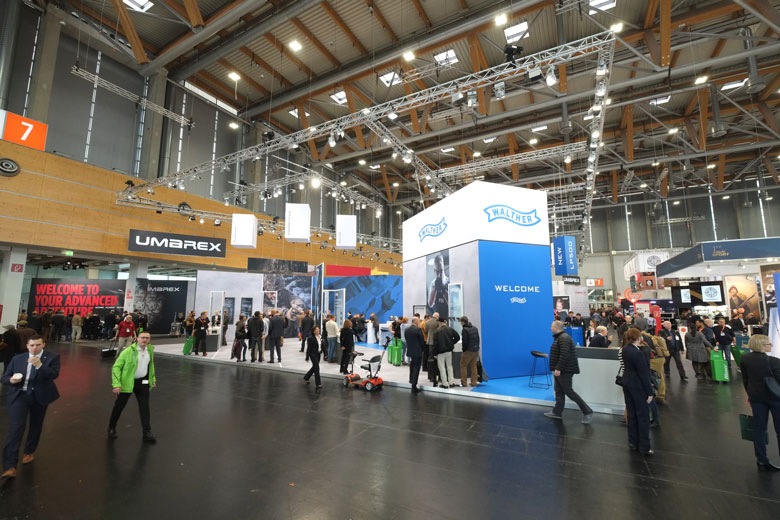 And there’s more similarity than booth size between Diana and Umarex at this year’s show. Umarex was also launching a new CO2-powered pistol/carbine. This is the Umarex RP5. Umarex lead airgun designer Jurgen Klockener is shown below looking pleased with his latest creation… 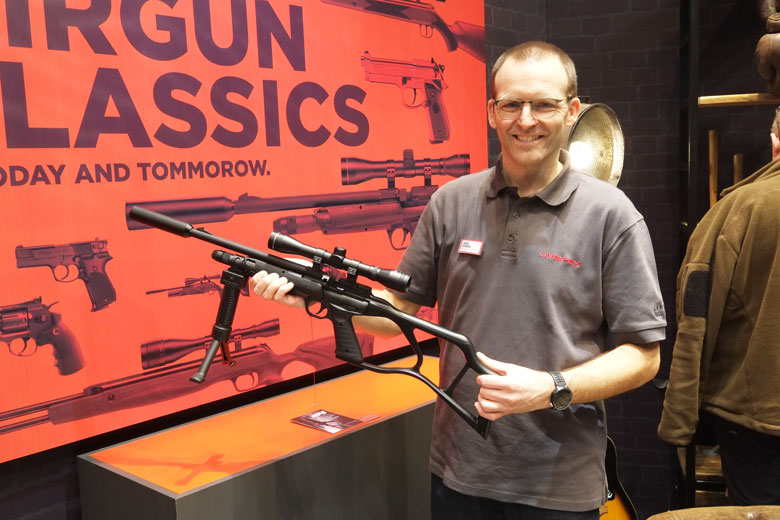 The Umarex RP5 has an unusual pump action. The forward part of the stock under the barrel is pushed forward and back to load a pellet from the 5-shot straight clip. Like most CO2-powered guns, the RP5 is not designed to be a powerhouse, however, it gives Muzzle velocities of up to 574 FPS in .177 caliber and 500 FPS in .22.

Look for the Umarex RP5 to be available in the USA later this year. 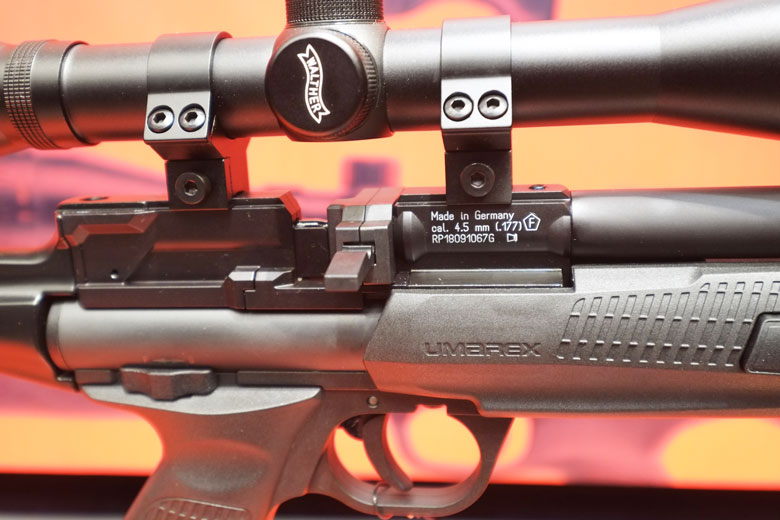 Recently, Umarex announced that they had achieved the coveted license to market airgun replicas of Glock pistols.

Jurgen showed me one of the first results of this collaboration. It’s a .177 caliber pellet-firing, blowback version of the Glock 17. 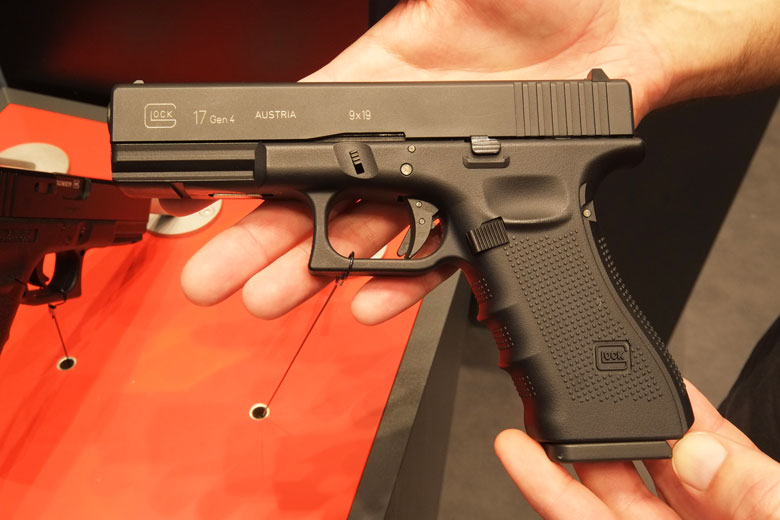 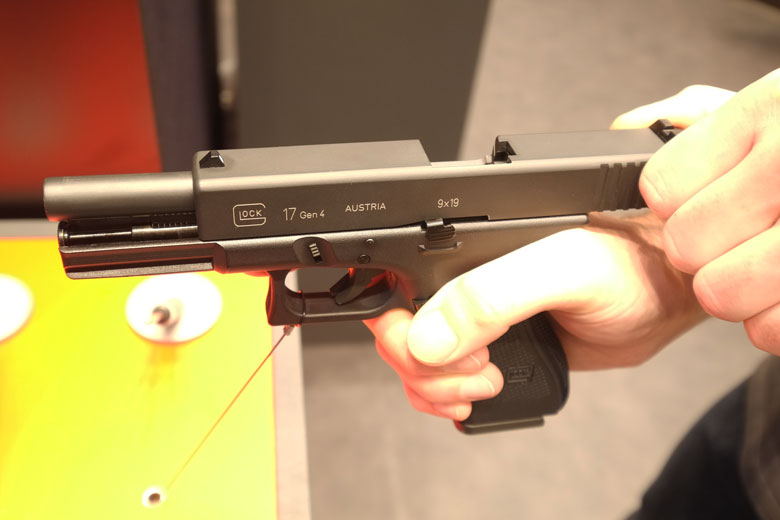 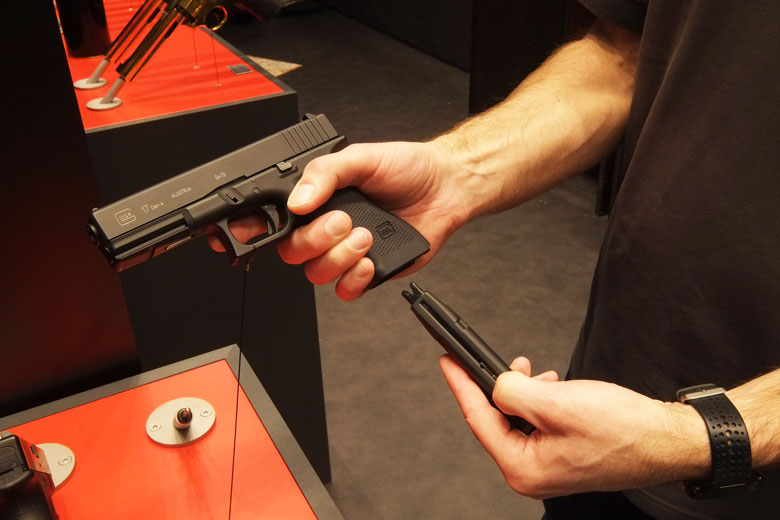 There will also be a BB-firing non-blowback version of the Glock 17. Other Glock replica pistols are also in the works…

So that’s our overview of Diana and Umarex for today. Check back tomorrow for more from the 2018 IWA Classics show 🙂