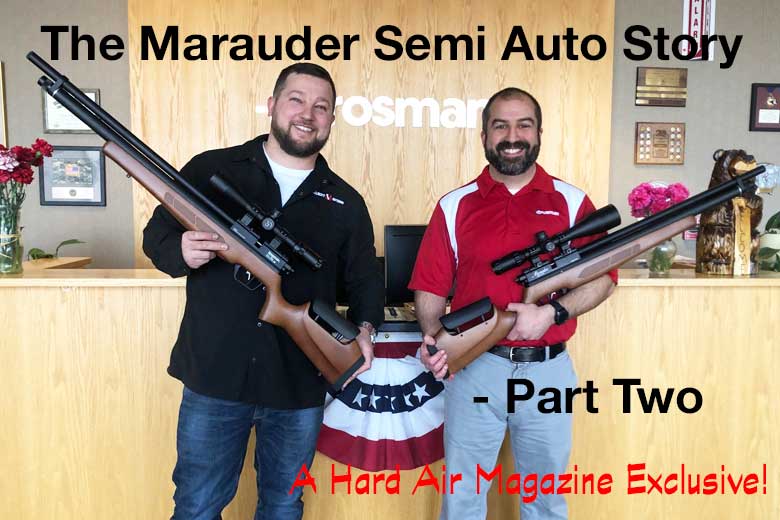 In Part Two of this exclusive Hard Air magazine Report, Stephen Archer brings us details for design and performance for the new Benjamin Marauder Semi Auto air rifle. He talked to two key players in the Benjamin Marauder Semi-Auto team. Phillip Guadalupe the Product Manager and John Solpietro, Chief Designer. That’s them above!

The Benjamin Marauder Semi Auto uses a similar – but different – rotary magazine to that supplied with other Marauders.

The new “Semi Auto magazine” can be used with bolt-action Marauders. However existing mags will not function well with the Semi Auto. They WILL cause cycling and possibly accuracy problems, Phillip told me. Don’t use them!

As part of providing flawless cycling and accuracy with the Semi Auto action, there’s a stronger spring inside the mag.

There’s also a change to the magazine cover plate. The familiar kidney-shaped aperture is now replaced with a simple hole. 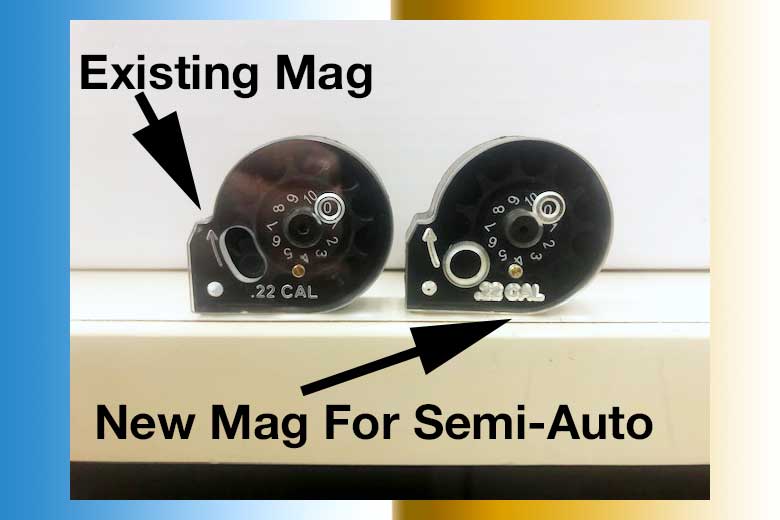 These changes mean that the new magazine has to be loaded with the first pellet skirt-first. The remaining pellets can then be loaded head first, as usual.

This, of course, is similar to the way in which pellet magazines from many other manufacturers work. So it’s not a big deal and the user soon gets used to the slightly different loading technique.

And here’s an interesting phenomenon..

Just like bolt-action Marauders, the new magazine blocks the bolt when no pellets remain. However, the gun still goes “bang” when you pull the trigger, even when the magazine is empty! Duhhh…

Here’s the reason. As described below, the hammer and bolt now move independently of each other. So when no pellets remain in the magazine, the bolt is blocked, yet the hammer of the Marauder Semi Auto still cycles. Hence, air is released, even though there’s no pellet to propel.

There’s a clear change in the report when a blank is fired, making it easy to realize that re-loading is required. Unless, you’re keeping an eye on the magazine counter, that is… 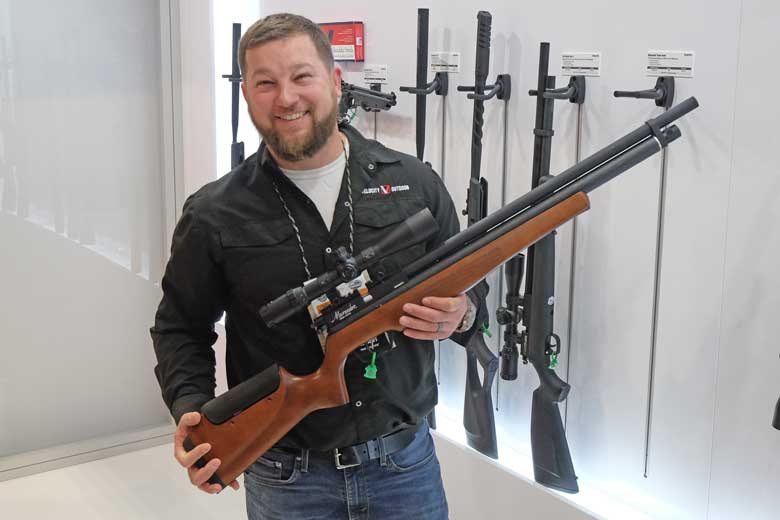 The question “How fast can it fire?” takes on two different meanings with the Benjamin Marauder Semi Auto. One meaning refers to Muzzle Velocity. The second to the rate of fire that can be attained. Let’s start with the rate of fire…

The actual cycle time for making one shot (and reloading) after the trigger is pulled is actually approximately 30 milliseconds, Phillip explained. However – he continued – a more useful definition is how rapidly the gun can be fired by a human.

To test this, we fired a Benjamin Marauder Semi Auto across one of Velocity Outdoor’s high-tech Oehler Model 36 chronographs. This measures both FPS and the time between shots. The output is presented on a computer screen, as we can see below.

Here’s the results when Phillip shot the gun. That’s 336 rounds per minute cyclic rate. Ten shots in 1.7 seconds at an average of 886 FPS. Wow! 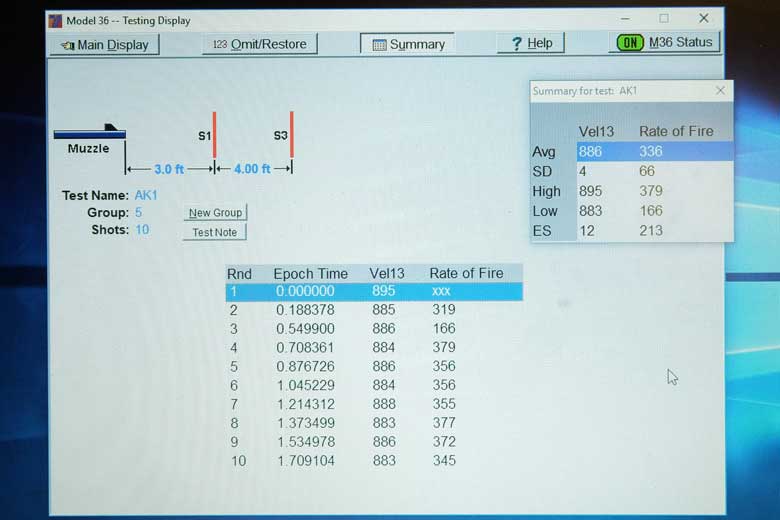 And here’s the results for me. Only 275 shots a minute. It took me 2.1 seconds to empty the magazine. Must try harder 🙁 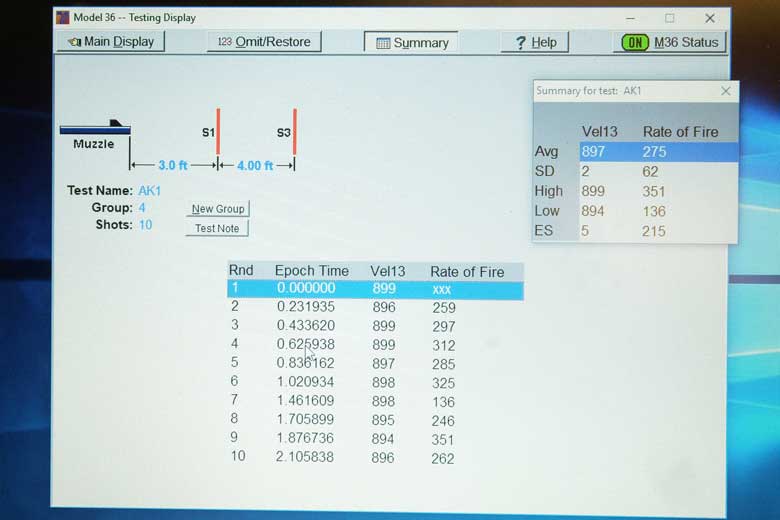 As you can see, Phillip is a MUCH faster shot – and they made a great group, too. Obviously that’s a result of his Marines training. Don’t mess with this guy!

What is clear is that it’s possible to achieve a cyclic rate of around 300 rounds per minute. At least before the capacity of the 10-shot magazine is exhausted – in about 2 seconds. Let’s be realistic. That’s plenty fast enough for anyone with a Semi Auto…

And this is VERY IMPORTANT. Take a look at the FPS numbers. It’s clear that they are very consistent.

So, the regulator is able to keep up with this rate of fire. We were shooting unsorted Crosman 14.3 Grain domes and the Standard Deviation was just 2 to 4 FPS. That’s excellent consistency. No problems there.

The Crosman website shows a specification of “up to 950 FPS” with lead pellets. That’s achievable with 14.3 Grain Premiers if the hammer spring is cranked right in.

In previous lives, I spent many years working in product development organizations. So I’m familiar with the multiple stages through which every product design iterates and the testing effort that’s required to ensure a reliable end result.

From that professional background, it’s clear to me that Velocity Outdoor is doing everything right in the development of the Benjamin Marauder Semi Auto air rifle.

The company is working steadily through their structured development process. I have confidence in the June 2020 availability date as a realistic goal.

Chief Designer John Solpietro explained that the Team’s design strategy for the Benjamin Marauder Semi Auto is based on achieving the most reliable and durable result. They investigated many alternative actions as part of the preliminary design stage and decided that simplest was best. So there’s surprisingly few parts in the Semi Auto action. 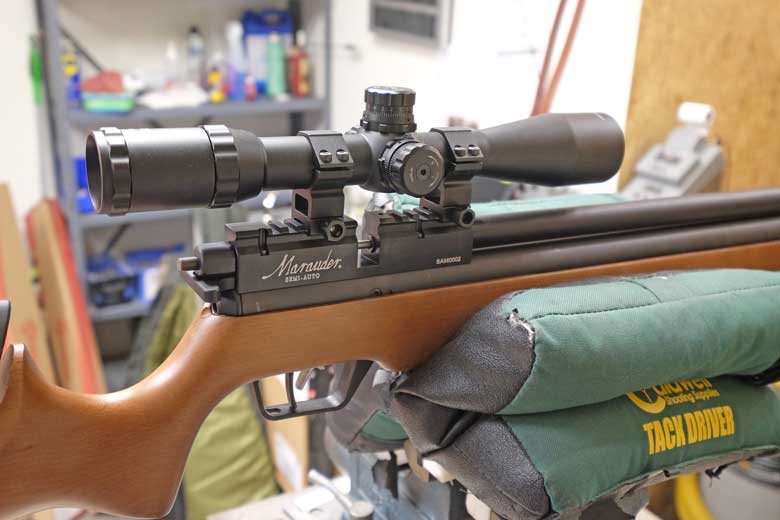 In other words, the Benjamin Marauder Semi Auto as it stands today is in a “near final” design state, but there are still a few tweaks to be finalized and tested. However the action is not going to change. Here’s how it works…

Hammer bounce in PCP and CO2-powered airguns has long been a curse everyone tries to avoid. Just about all PCPs have it to some extent, so this is not a Marauder-only issue. In the Benjamin Marauder Semi Auto hammer bounce has been embraced by the design team!

John explained that they had used much high-speed photography during the design of the Semi Auto action. This documented hammer bounce in a standard, bolt-action Marauder and showed how better use can be made of this, otherwise lost, energy.

Hammer bounce takes place due to the action of air pressure and hammer spring when the gun is fired. This forces the hammer back-and-forth and opens the valve more than once for every shot. Hence wasted air.

In the Benjamin Marauder Semi Auto, the hammer now actually functions as a piston, using otherwise wasted air to force it there against the pressure of the hammer spring.

Simply put, the hammer is now thrown back – instead of bouncing back – and is “caught” by a trigger sear. It then stays back, ready to be released for the next shot.

Because of the hammer’s new functionality, there’s no striker. The new pressure tube has shorter slots in the underside around the trigger to allow for the piston effect and the trigger is completely different, too, given the new method by which it is reset before firing.

For this design, the hammer and bolt are decoupled. They’re “solid” in the bolt action Marauder, by comparison. This enables the Benjamin Marauder Semi Auto to be cocked using the T- handle.

There’s also a “forward assist” button at the rear of the T- handle. This does not need to be generally used. However, it’s useful in case of a pellet failing to load fully, or in the rare event of a jam.

Below. One way to charge the semi auto is to hang it from your hand using the T handle, then insert the magazine. 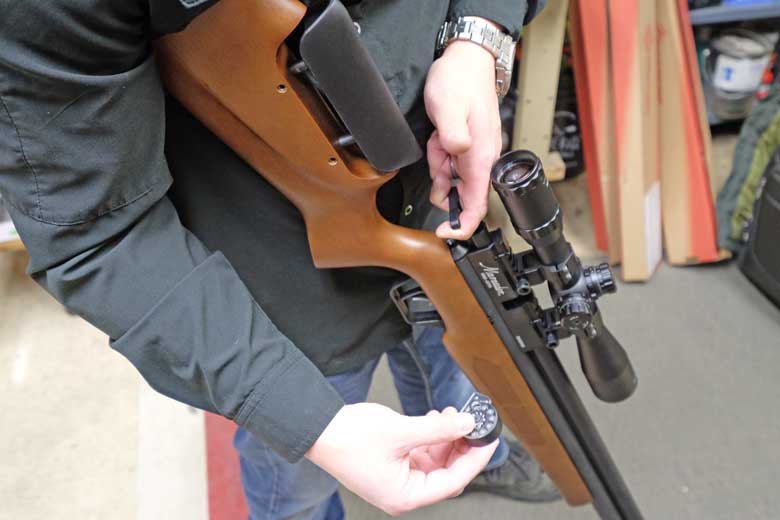 Of course, the new magazine is part of the design, as we already discussed.

There’s also an interesting return to “classic” design in the bolt itself. Yes, the bolt probe of the Benjamin Marauder Semi Auto resembles that of the venerable Crosman 160!

Gone is the necked-down probe of the regular Marauder bolt that pushes on the center of the pellet. It’s replaced by a drilled-out probe that bears on the edges of the skirt. Now the air passes through the bolt probe, instead of around it.

Meanwhile, further forward, the valve itself is of a new design. It’s shorter than that of the existing Marauder valve and is – as we mentioned before – non-adjustable for air flow out to the transfer port.

Ahead of that, John explained, the Gauge Port is also reduced in length. It’s something like half the length of the regular Marauder part to maximize air tube capacity.

Now it’s clear why up-grading a standard Marauder to Semi Auto is a “no no”!

Check out the other sections of this three-part story.