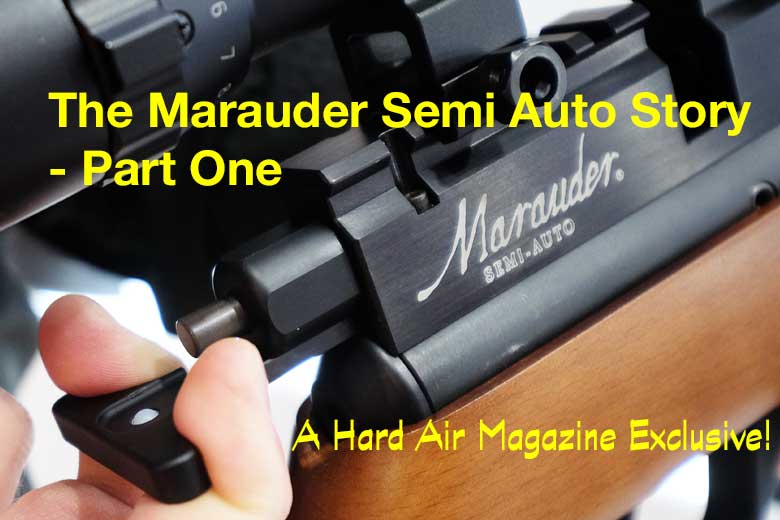 The result is this exclusive first look in detail at what is sure to be one of the outstanding new airguns of 2020! Here’s Part One of this three-part story. Stephen Archer writes…

I talked to the two key players in the Benjamin Marauder Semi-Auto team. Phillip Guadalupe is the Product Manager while John Solpietro is the Chief Designer. These two gentlemen answered every question I had very openly and honestly. We all should thank them for their time!

Phillip and John spent two hours discussing every aspect of this new model with me. Right down to individual part level. They even showed me CAD design files to explain important engineering issues. That’s openness!

Then we went to the company’s test engineering department and shot a pre-production gun – A LOT! 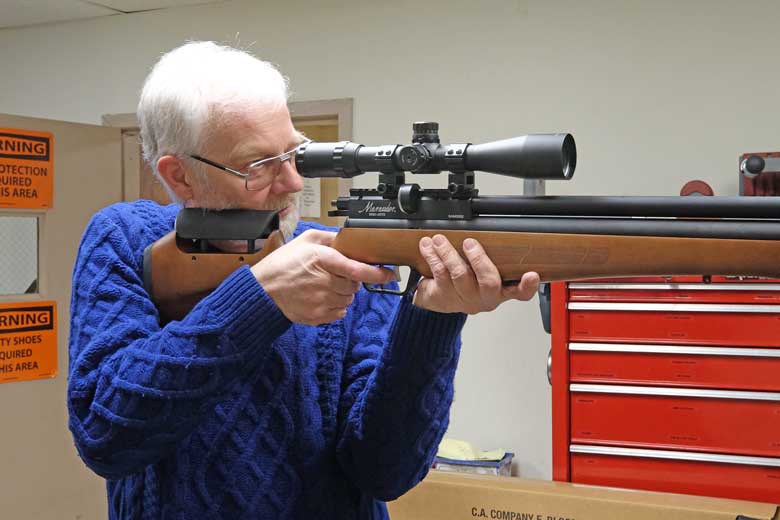 So this is what I discovered…

2. The semi-auto action cycles consistently. It doesn’t jam – believe me, I tried! It accepts a wide range of pellets, too.

3. Accuracy is fully up to Marauder bolt gun standards.

4. Muzzle Velocity is higher – yes you read that right, higher – than the regular bolt Marauder and consistent shot count is excellent too.

5. The new Benjamin Marauder Semi-Auto looks very similar to a bolt-action, Gen 2 wood stock Marauder. But inside there’s a TON of changes.

6. Don’t even think of trying to modify your existing bolt action Marauder to make it a semi-auto! There’s so many different parts that it would cost a fortune to change them. And it likely wouldn’t work anyway.

7. If you want a Benjamin Marauder Semi-Auto, just buy one – this is NOT a “home tuner conversion” you can add to your existing gun.

Yes, I just said this twice, but it’s very important that everyone understands this point. Take it from the gun’s designer: John was very emphatic about this!

9. Responsibility and 100% safe gun-handling are non-optional when owning a semi-auto air rifle!

10. Finally, the Benjamin Marauder Semi-Auto is going to be available very soon. Like about June 2020.

Now let’s get down to the details…

This compares to the Marauder Field And Target (regulated) model BP2264RW that sells for $579.99. For comparison, the bolt action, wood stock BP2264W model is currently selling at $499.99.

So the Benjamin Marauder Semi-Auto is – as you would expect – more expensive than the other models. But don’t forget that it is also regulated.

So the real difference is likely to be around $120 more than the Field And Target model. Not a bad price!

Overall length and weight for the Semi-Auto are very close to those of the existing Marauders.

Fill pressure for the Benjamin Marauder Semi-Auto stays the same at 3,000 PSI. The regulator set point is 2,030 PSI – as with the Field And Target Model.

The trigger feels and looks like the existing Marauder assembly. But don’t be deceived, there’s a lot of different parts in the trigger assembly and they’re DEFINITELY not compatible. Phillip confirmed that the Semi-Auto trigger can be adjusted to a pull weight between 1.2 and 2.2 Lbs.

Velocity Outdoor specs for the Benjamin Marauder Semi-Auto are “up to 950 FPS with lead pellets”. This would seem realistic compared to the 880 – 900 FPS I saw when firing Premier 14.3 Grain pellets.

So the Benjamin Marauder Semi-Auto shoots faster than the other Marauders. It also combines that with a surprisingly good shot count.

How do they do that? Hmmm, that John is obviously a smart guy! We’ll find out more later in this story…

Phillip confirmed that the Benjamin Marauder Semi-Auto will be supplied with a Crosman-manufactured barrel. However, this barrel is very similar to that from other Marauders, so a Lothar Walther barrel could be a fairly simple future option.

The Marauder has always been renowned for it’s built-in tuning capability. Unsurprisingly – when you understand how the action works – this is changed for the Benjamin Marauder Semi-Auto.

Hammer spring adjustment is still available. It works in the same way, too. Turn clockwise to increase FPS, counterclockwise to reduce it. The minimum velocity is around 730 FPS with 14.3 Grain pellets, the maximum is 950 FPS.

There’s also a completely different valve from previous Marauders. This has no transfer port adjustment capability as a part of achieving consistent cycling of the action. 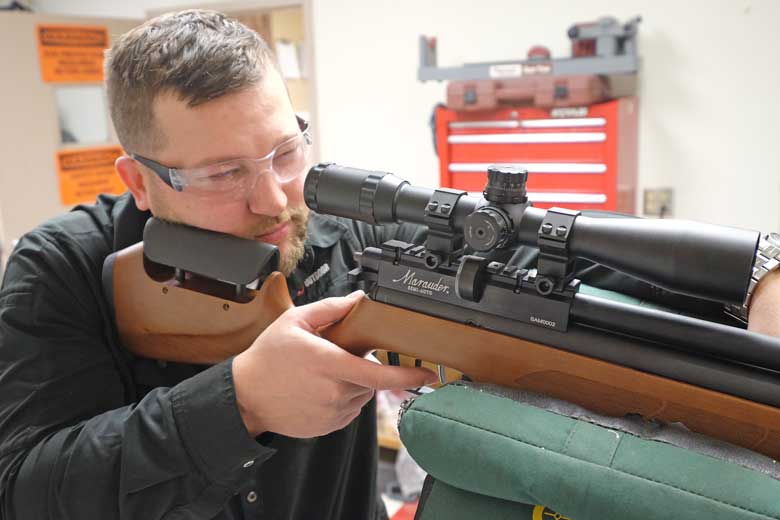 Overall, John explained that around 66% of parts in the Semi-Auto are common with other Marauders. But this includes small parts such as screws and seals. When grouped into major components, more like 60% of the Benjamin Marauder Semi-Auto is unique.

Differences that are not immediately apparent include a new breech, bolt, HPA tube, valve, gauge port and hammer. That’s in addition to the different trigger we’ve already mentioned.

The first Semi-Auto model will be in .22 caliber only, so that’s a difference. Although you would have to imagine that other calibers could be in the pipeline – and maybe an Armada version, too. That’s speculation from me, by the way.