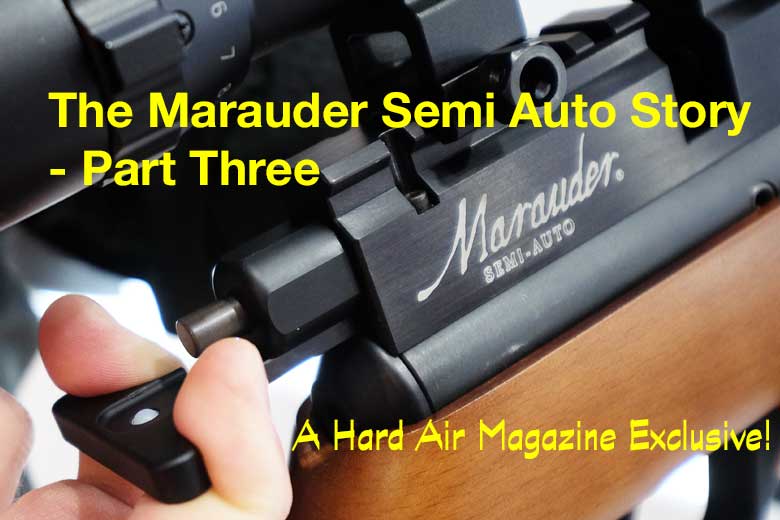 So far, something like 50,000 shots have been fired in the development and testing of the Semi Auto Marauder. Wow! And there’s still more testing to be done, too…

Below. Phillip Guadalupe shoots and John Solpietro looks on. 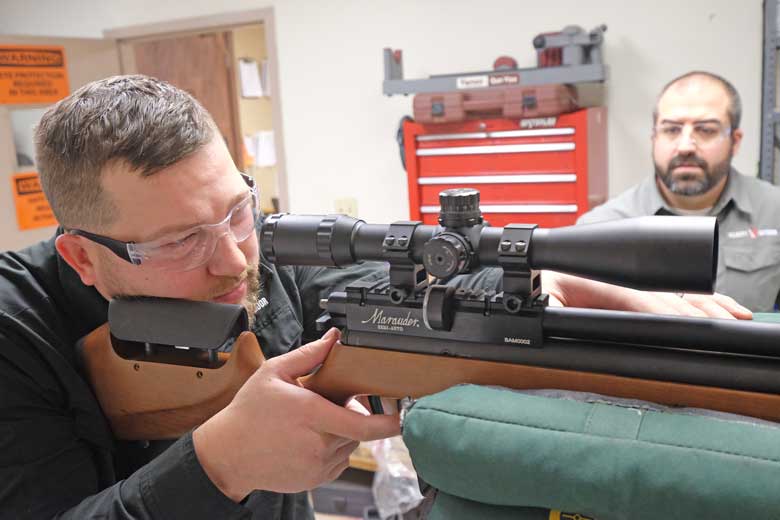 Velocity Outdoor likely sells more airgun pellets in the USA than any other manufacturer. (I believe the actual number is about a Gazillion every year. That’s my guess, anyway). They know mid-weight domed lead pellets will be the most popular fodder for the Semi Auto Marauder. So testing has concentrated on this type of pellet to date.

Remember too, that 14.3 Grain Premier pellets are ready-to-hand in unlimited quantities for the development team. Furthermore, the Semi Auto Marauder MUST perform faultlessly with the company’s own pellets!

However, the development team has been using other pellets with great success in both action and accuracy testing. Phillip told me that 15.9 Grain JSB Jumbos are giving great results, for example.

I also shot a selection of pellets including H&N Hornet, GTO domed alloys and Polymag Shorts through the sample gun. No problems with feeding and accuracy there… 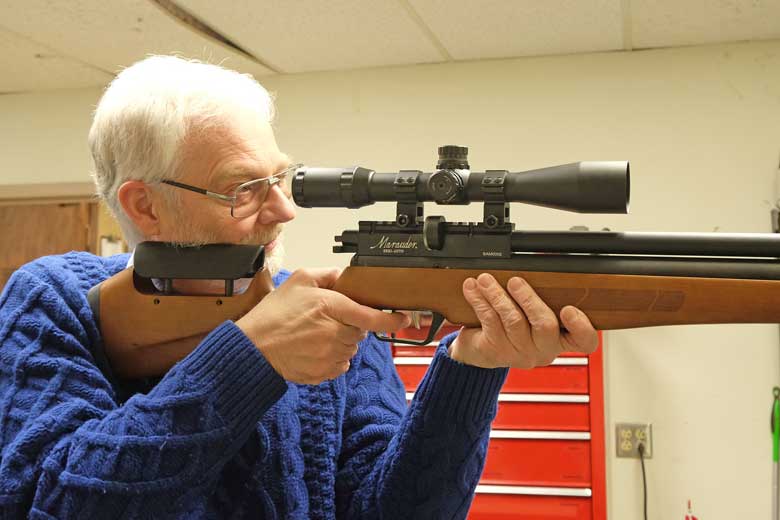 So has the Velocity Outdoor test team qualified every single type of pellet through the Semi Auto Marauder yet? Of course not and they probably never will. That’s a pretty-near impossible task!

But they will shoot representatives of all pellet types before testing is complete. If a type of pellet is found that doesn’t cycle well – say heavies, for example – then the company will be able to advise customers to not use these.

Have they shot slugs? No, not yet. It’s all in the test plan and there’s plenty of shooting yet to be done.

And then there’s the “J word”. Jamming forms an important part of action testing. The Velocity Outdoor team needs to understand what can cause a jam to occur. Then John and his engineers design-out the issue. It’s tested again. Repeat as necessary…

Of course some jams will be inevitable from operator error, if no other reason. For example, the first time I was too gentle with the T-handle. A push on the forward assist fixed that.

Phillip explained that most jams happening now are a result of the magazine not cycling fully. But they can be cleared by use of the T-handle and forward assist – as in my case. 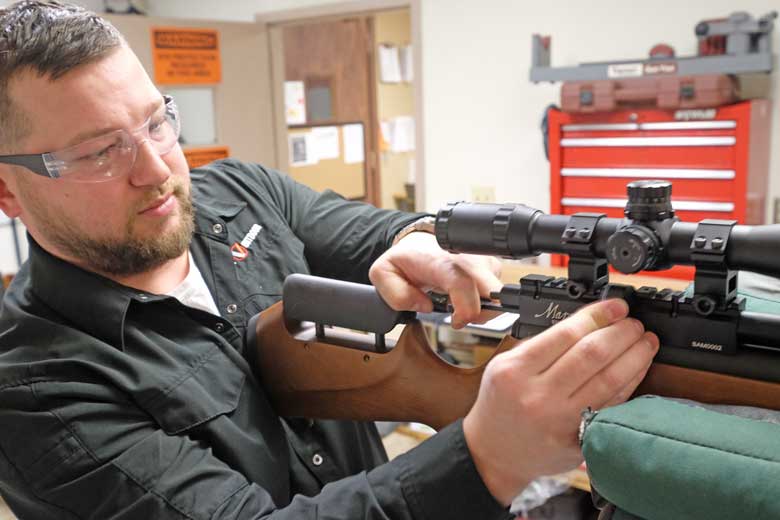 “So what happens when pressure falls below the regulator set point?” I asked. The answer is that the Semi Auto Marauder will still cycle with pressure down to around 1,000 PSI.

Below about 1,000 PSI – half the regulator set pressure, of course – the gun will not cycle. Air just bleeds out from hammer bounce and the gun must be re-charged with High Pressure Air, Phillip told me. The hammer bounces multiple times and does not re-sear. This can happen until all the air bleeds out.

OK, that’s a much more benign outcome that I had imagined before our meeting!

While I didn’t test that myself, I did shoot the sample gun down to around 1,500 PSI on the gauge and it was sill cycling just fine.

This an area where we all need to learn additional skills with any semi-auto airgun!

As we know, the Semi Auto Marauder uses a hammer-bounce assisted blowback action. It functions much like the blowback action of a firearm. However there’s one BIG, IMPORTANT operational difference!

With a semi-auto AR15, for example, you can make the gun safe by setting the safety to safe, dropping the magazine and racking the charging handle so that the extractor removes any round that has already cycled into the breech. Gun clear! And you can prove this with a chamber flag…

Of course, (almost all) airguns have no cartridge. This means that there’s no way for an extractor to pull a chambered round out of the breech. Neither is there a loaded round indicator to tell the shooter there’s still “one up the spout”.

So the Semi Auto Marauder will always remain loaded unless all 10 pellets in a magazine have been shot out of the barrel.

In order to prove clear with the Semi Auto Marauder, it’s necessary to:
1. Remove the magazine.
2. Shoot the gun in a safe direction to discharge any pellet in the barrel.
3. De-cock the rifle by pulling back the T-handle and letting it come back forward under control with the trigger blade pulled.
4. Set the safety to safe.
5. As proof of safety, put a clearing rod down the barrel.

Again, it’s VITAL to remember that the the Semi Auto Marauder will always remain loaded unless all 10 pellets in a magazine have been shot out of the barrel! We all will need to internalize this and apply an enhanced level of care in gun handling to ensure safety.

Responsibility and 100% safe gun-handling is non-optional when owning a semi-auto air rifle! 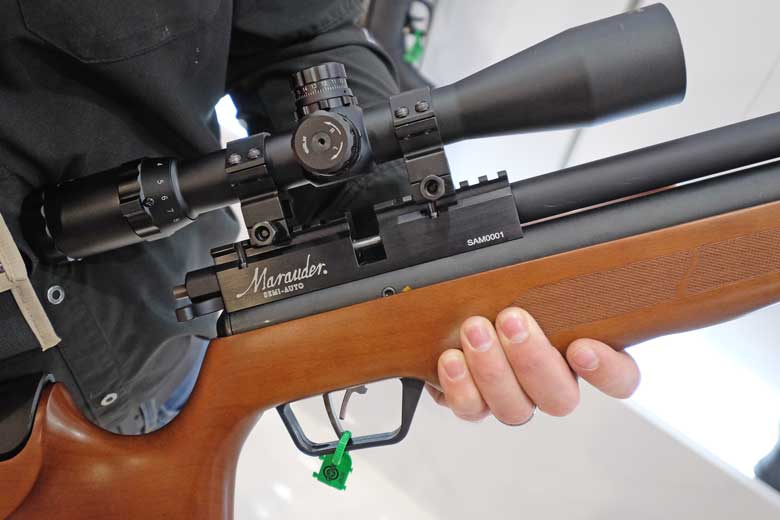 “So what happens when a part-full magazine is removed from the Semi Auto Marauder, then re-inserted?” I asked.

The answer is that, of course, one pellet will remain in the barrel from the extracted, part-used magazine. To re-load that magazine, the T-handle has to be pulled-back and fly forward.

So, yes, there’s now two pellets in the barrel. You have a double feed.

Phillip explained that they have had great success in clearing double feeds simply by shooting them out. On the rare occasions this doesn’t work, it’s necessary to remove the magazine, de-cock the rifle and push out the pellets from the barrel using a clearing rod.

So there we have it. The Semi Auto Marauder works well and is very close to being production-ready.

It’s sure to appeal to anyone who loves shooting; to hunters who want a quick follow-up shot and people who like fun!

Sure, there’s a perception that bolt guns are more accurate than semi-autos. But Phillip emphasized that the Velocity Outdoor team is seeing the same standard of accuracy from the Semi Auto Marauder as with standard bolt-action Marauders.

Of course I asked if we will see more semi-auto Benjamin PCPs in future. Of course, Phillip gave a wry smile and replied “Possibly!”

Bolt action Marauders will continue to be sold.

And I make no apology for repeating these two key points:

1. Responsibility and 100% safe gun-handling are non-optional when owning a semi-auto air rifle!
2. Don’t even think of trying to modify your existing bolt action Marauder to make it a semi-auto!

I hope you’ve enjoyed reading this exclusive HAM preview of this new Benjamin PCP air rifle. Again, thanks to Phillip and John for all the time and effort they took to bring you this story.

To read the previous parts of this story, just click the links below.