There’s a new Weihrauch PCP air rifle! It’s called the Weihrauch HW 100 BP and it will be first shown at the 2019 British Shooting Show this weekend (15 – 17 February).

The Weihrauch HW 100 BP will be available with a choice of 410 mm (16.0-Inches) and 600 mm (23.6-Inches) barrels with air stripper. Weihrauch tell us that there’s a moderator available as an alternative.

Most technical specifications are the same as the regular HW 100.

Interestingly, the cocking lever is positioned in the Weaver-type scope rail. The manufacturer tells us that it’s placed fairly far forward, making it convenient to operate. A left-handed version is being introduced at the same time.

The stock has an ambidextrous design, says Weihrauch. It’s wood with a soft-touch finish and there’s an adjustable buttplate. In addition there’s a small Weaver-type rail under the forend to facilitate the attachment of a bipod or other accessories.

Also announced is a carbine version, the HW 100 BP-K. This is similar in concept to the carbine versions of full-length HW 100 models and will be offered primarily in markets with limited power requirements. Barrel length for the carbine is 310 mm ( 12.2 -Inches)

The company is giving an estimated availability date of May 2019, for both the Weihrauch HW 100 BP and HW 100 BP-K versions.

Of course, these new bullpup air rifles will also be on display at the 2019 IWA OutdoorClassics show. That’s Booth 222 in Hall 7A for those who will be attending. HAM will bring you more details and photographs from Germany in March! 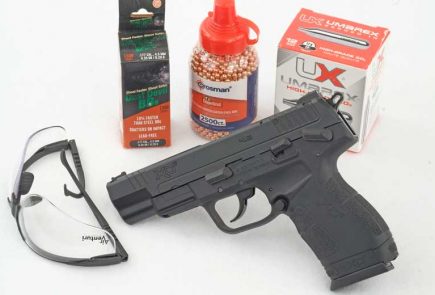