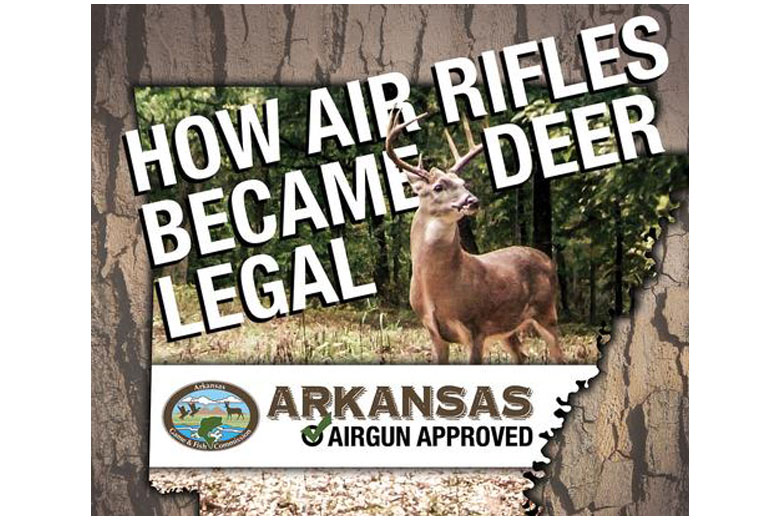 While the announcement may have been a few lines of text in a press release for the AGFC, it was in reality the sum of years of work by a handful of dedicated sportsmen. In fact, the amount of time and energy spent by these folks is mind boggling. The following story is a fine example of interested parties teaching and changing an institution for the better.

Gun guys as a group tend to be tinkerers. Air gun shooters are no different. In particular, Seth Rowland was one of the early adopters of big bore PCP air rifles.

In 2007 Seth began experimenting with projectiles for big bore air rifles. While honing down bullet designs that would maximize velocity and accuracy, Seth began the Herculean task of getting the attention of a state agency and moving it in the direction of progress.

Thankfully the folks with the Arkansas Game & Fish Commission were open-minded in their approach to working with Seth and his partners, Bill Dempsey, Eric Henderson, and, later, Howard Robinson.  But let’s not get too far ahead in this story.

Speaking of his group’s first attempt to make progress with the AGFC Seth said, “We thought we had made it easy for them, but they weren’t ready for the information yet.  I think we overloaded [the AGFC] with information.”

The first attempt at gaining legitimacy for big bore whitetail deer hunting in Arkansas was not successful, but he was not without hope. He kept up the contacts he made, and searched out for new contacts who could help make a way for presenting his case while backing it up with demonstrations, science, and, of course, credible endorsements.

Seth reached out to Howard Robinson, the Arkansas State Field Director of the Sportsmen’s Alliance. Howard’s resume for working in the hunting and outdoors field is nothing short of amazing. He has dedicated so much of his life to working for the betterment of outdoor recreation and hunting in Arkansas (and other places, too) that Outdoor Life Magazine listed him as an Unsung Hero Award winner for 2010.

As a result of a lifetime of work Howard knows many people in the hunting and outdoors field. He has also approached the AGFC before for other issues and was armed with years of experience in working with diverse groups to bring about equitable solutions that worked to the benefit of both the public at large and the outdoors men and women of the state.  Seth had found his diplomatic partner.

Howard went to several air gun demonstrations with Seth. During these outings Howard was able to see for himself how these big bore air guns were serious tools that could be used to humanely harvest game animals like whitetail deer.

“I talked to some of the folks at the Arkansas Wildlife Federation, and said I would like to have Seth bring his deer quality air rifle and talk to us about it a little bit and talk about the idea of getting a resolution passed.” Stated Howard.

Seth went to the AWF meeting in Little Rock with his big bore rifle and made his case for using big bores for whitetail deer hunting in Arkansas with the board.

Seth and Howard drafted a resolution stating that big bore air rifles are viable equipment for the harvesting of whitetail deer. Board president Ellen McNulty then polished the resolution in preparation for presentation to the Arkansas Game & Fish Commission.

Howard said, “With this we got a chance to speak to the commission. Seth didn’t feel comfortable speaking, and I had spoken in front of the [AGFC] Commission many times, so I did the biggest part of the presentation.” He continued to say that Seth was prepared to answer all the technical questions that would come as Howard was sure they would be very curious.

Howard also went to the Scott County Farm Bureau and asked them for a letter of endorsement which was presented to the commissioners before the meeting. “I suggested .40 caliber and that’s what the commission stuck with since they allow .410 shotguns and a .40 caliber air gun will shoot a lot bigger slug.”

At this point the Commission was listening and listening intently. They established a committee and set about to research the matter further with visits to some air gun manufacturers, like Umarex USA of Fort Smith, Arkansas for demonstrations and discussions with their engineers.

After much networking, countless miles on the road, emails, and phone calls Seth was ultimately successful in accomplishing his goal of legal big bore air gun whitetail deer hunting in Arkansas.

The Commission was grateful, in the end, for the opportunity to study the air guns! “They needed to get educated on air guns. They were totally unprepared for the ballistics and the physics.” Seth said.

The good news is that hunting opportunities for whitetail deer hunting in Arkansas have expanded to include big bore air guns during modern gun season.

It is also a prime option for disabled hunters who cannot manipulate a bow or deal with the harsh recoil associated with most modern rifles.

Axeon NightVue – A New Tool For The Nighttime Airgun Hunter