How well can the .25 caliber Gauntlet shoot at 100 Yards? 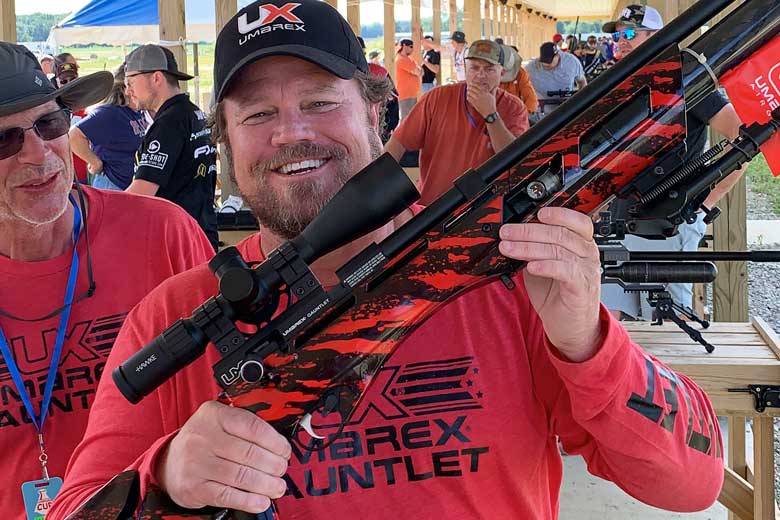 How well can the .25 caliber Gauntlet shoot at 100 Yards? That’s a question that was answered recently at the 2019 Pyramyd Air Cup.

In the 100 Yard Benchrest finals at the PA Cup, there was one air rifle that stood out from the rest. And I’m not saying that because of the stunning red/black camo-dipped stock coated with a polyurethane sheen!

That gun was the .25 caliber Gauntlet being shot by Eydin Hansen. (That’s Eydin, above, with James Bell on the left). Competing in a sea of air rifles priced at around $2,000 – around 90 of them! – the red Gauntlet stood out as being basically a $299 airgun with about $100 of mod parts. 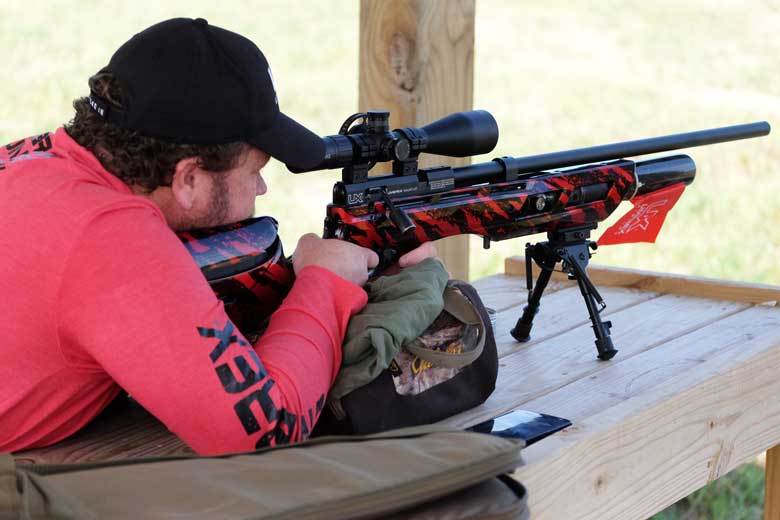 It’s true that Eydin didn’t win the competition. However he did make it to the finals from the 91 who entered the competition. That – in itself – was a HUGE achievement for any of the shooters taking part!

Eydin’s score in the finals was 179 against an average finals score of 207. (The maximum theoretically possible score is 250).

But that 179 was actually Eydin’s lowest score in the 100 Yard benchrest competition. In the previous two rounds, he had achieved scores of 194 and 203. The Gauntlet had been putting plenty of pellets in the “Ten Ring” in windy conditions at 100 Yards throughout the competition!

While the Gauntlet did not make it in the top 10 in the finals, Eydin was confident, “I managed to put two pellets in the X (10-ring), but the wind just got me. I missed two targets completely because of it. Those misses hurt a score. I think if I spend more time with this Gauntlet in the wind I can get us in the Top 10 and in the money”, he said afterwards. 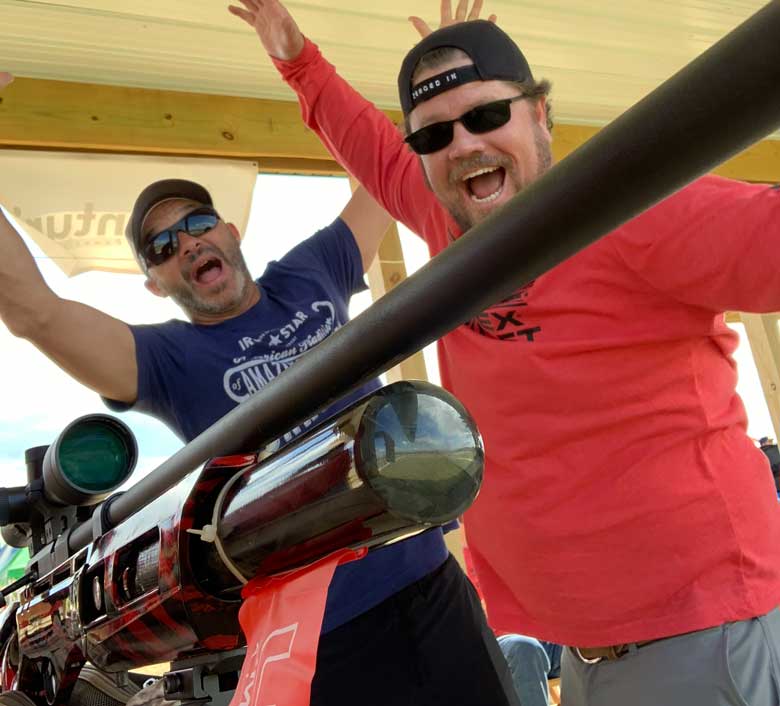 The basic Gauntlet is a great value air rifle. It earned a HAM Gold Award with a score of 89% in our testing. But we did’t test it to 100 Yards!

So what changes were made to make Eydin’s Gauntlet shoot at 100 Yards?

Umarex USA was very open about this when HAM enquired. It turns out that they were surprisingly few…

Firstly there was one change that was NOT made. Eydin’s Gauntlet used a stock factory barrel. That’s important because it indicates the accuracy potential that is inherent in the stock gun.

However, a larger, 24 cubic inch. carbon fiber bottle slated for use on the .50 caliber Umarex Hammer replaced the regular HPA tank. This was to give a greater number of consistent shots commensurate with the requirements of the competition. 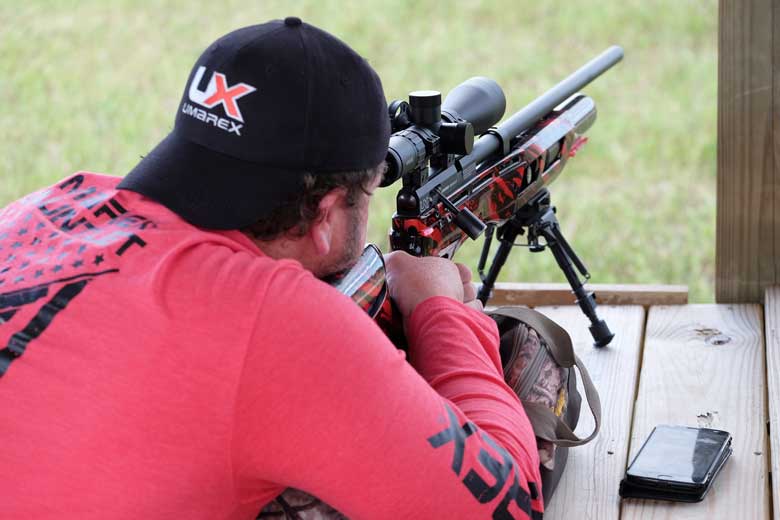 The Umarex USA team made a few simple improvements. They polished the hammer and opened-up the breech port a little.

Then they added a couple of the aftermarket parts that are becoming popular for this air rifle.

One was the Hajimoto Super Tune Kit. Another was the Valve Retainer produced by Jefferson State Air Rifles while the third was the 2-stage trigger also offered by the same company.

That was it! With the exception of the larger tank, these were simple mods that could be achieved simply and at low cost by any enthusiastic and competent owner.

Of course, the choice of pellet is a vital contribution towards accuracy. For this competition, Eydin chose 33.95 Grain JSB Exact King Heavy pellets. Incidentally, this was NOT the MkII version.

Below. James Bell was also shooting an Umarex Gauntlet in the same 100 Yard benchrest competition. 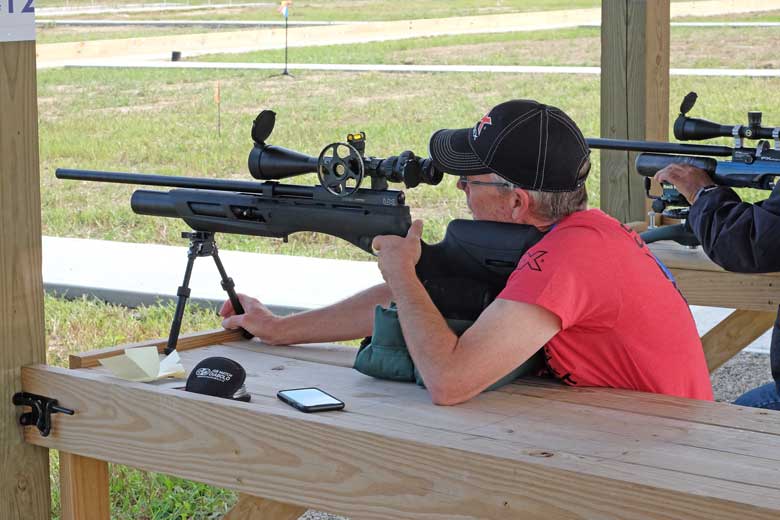 So now we know the answer to the question: How well can the .25 caliber Gauntlet shoot at 100 Yards?