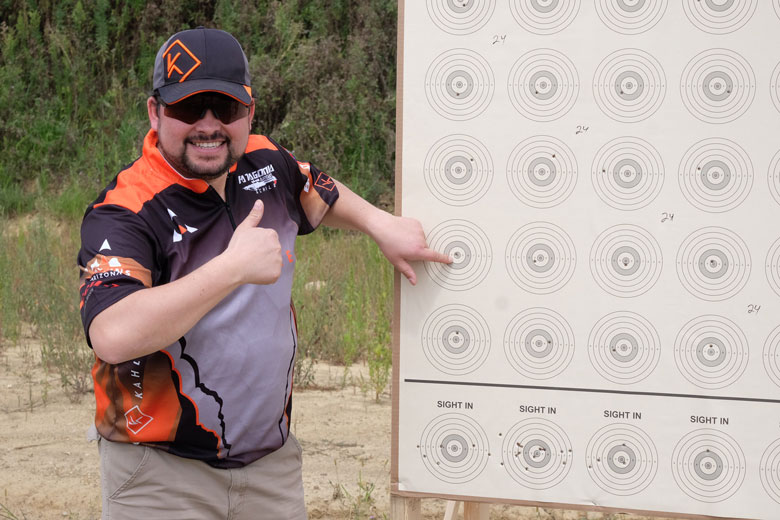 The PA Cup Benchrest competition is a major new initiative for the 2019 Pyramyd Air Cup. Along with a great new venue at the Cardinal Shooting center in Marengo, Ohio, it makes a huge upgrade for this sixth annual event.

So what’s all this PA Cup Benchrest competition about? Claudio Flores from Chile shows us in the photo above. The competition is – duhhh – shot at 100 Yards range, from a bench rest with air rifles. There’s a 30-minute time limit. Only powerful PCPs of more than .22 caliber need apply! 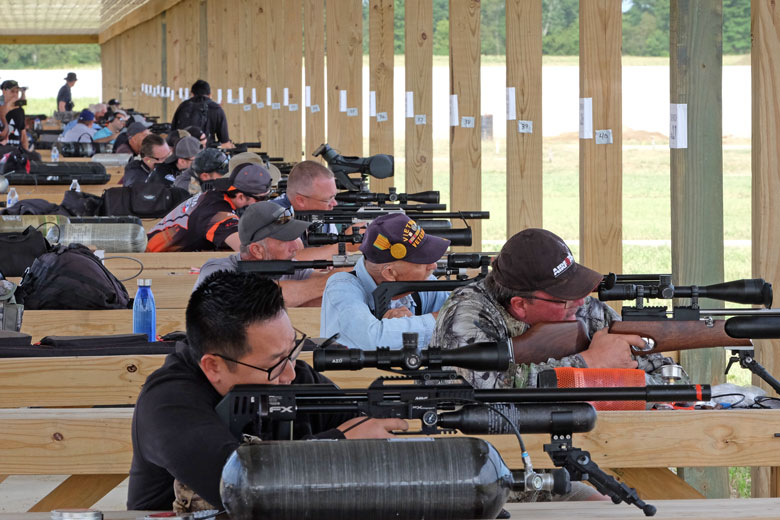 The target has 30 bulls. The lowest row of 5 bulls are for sighters. Each competitor may take as many sighters as they require. As we see here… 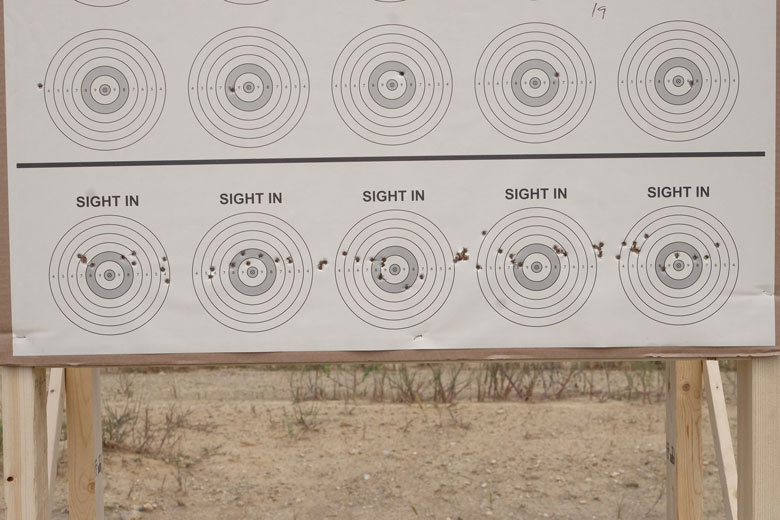 Then 25 shots are fired, one at each bull. More than one shot per bull attracts a penalty – so don’t do that! The aim, of course, is to make a hit in the “X” ring. That’s 1/4-inch in diameter…

Making hits in that X ring at 100 Yards in windy conditions takes some great shooting. But it can be done, as you can see from this target. 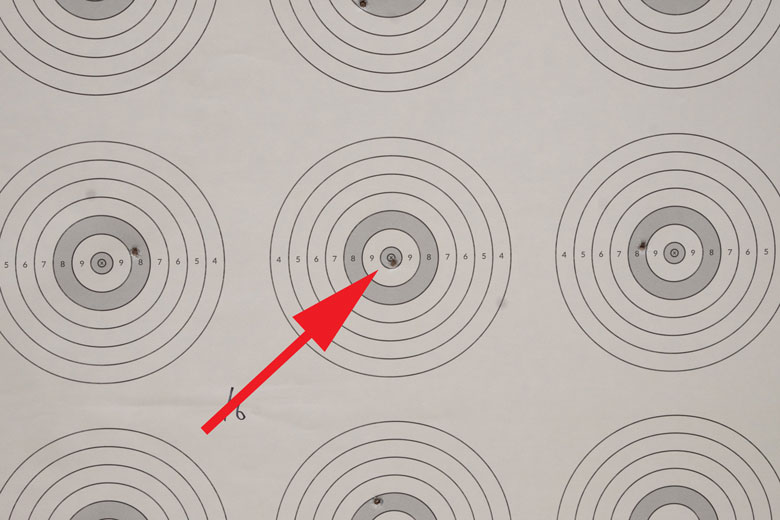 The PA Cup Benchrest competition has certainly attracted a lot of interest! This year there are teams representing many of the big names in the airgun industry, including Umarex, FX, Airgun Depot, Utah Airguns and Airguns of Arizona. There’s also a team from Air Arms that flew-in from Britain, specifically to attend the Pyramyd Air Cup.

Looking down the shooting line at the PA Cup Benchrest competition, there’s a huge variety of PCPs! Most are .25 or .30 caliber, but there’s also some high-powered .22 caliber guns too.

The FX Impact is a favorite for Benchrest shooting. Below we see Travis from Airgun Depot loading his magazine. 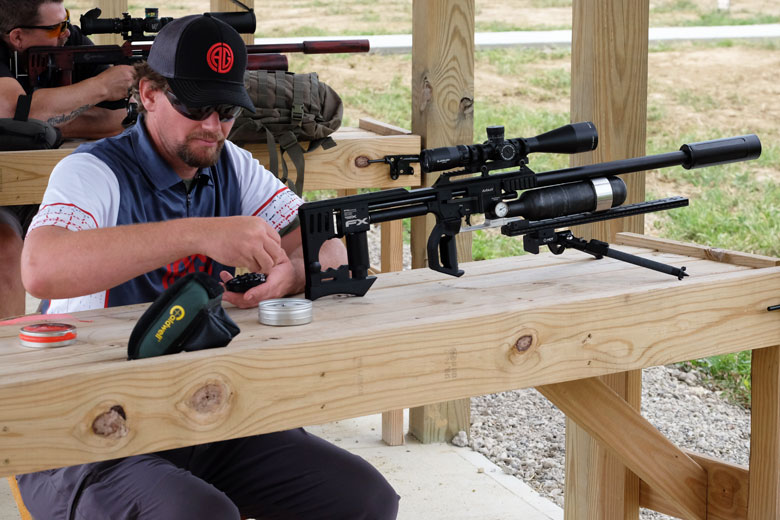 Travis’s gun is in fairly stock condition. But many of the Impacts are highly customised, like this one, below, being shot by Justin Jacobsen from Utah Airguns. This has twin tanks, a buttstock extension and – undoubtedly – more changes under the hood. 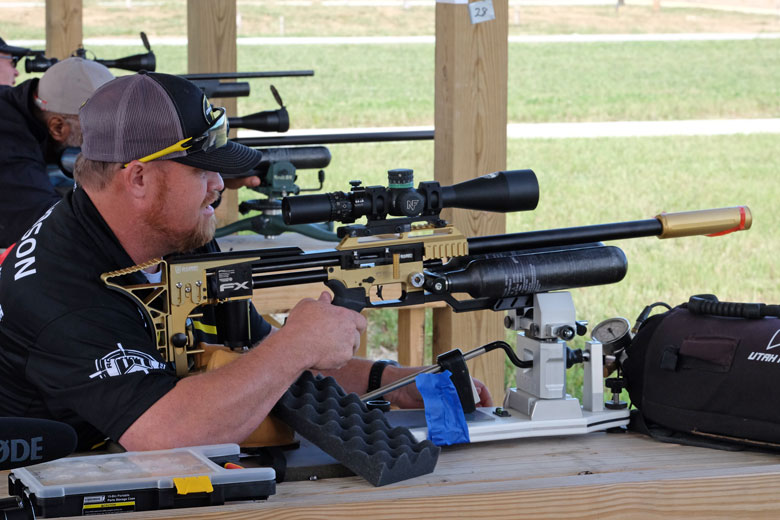 We also saw a number of .25 caliber Umarex Gauntlets on the range… 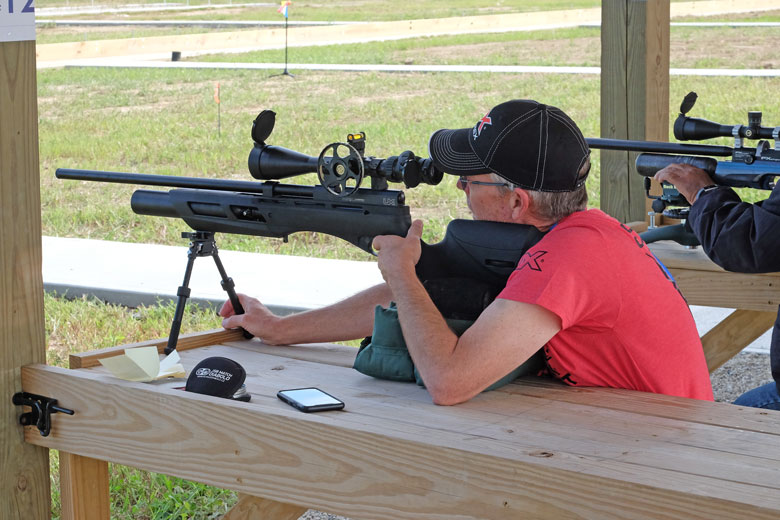 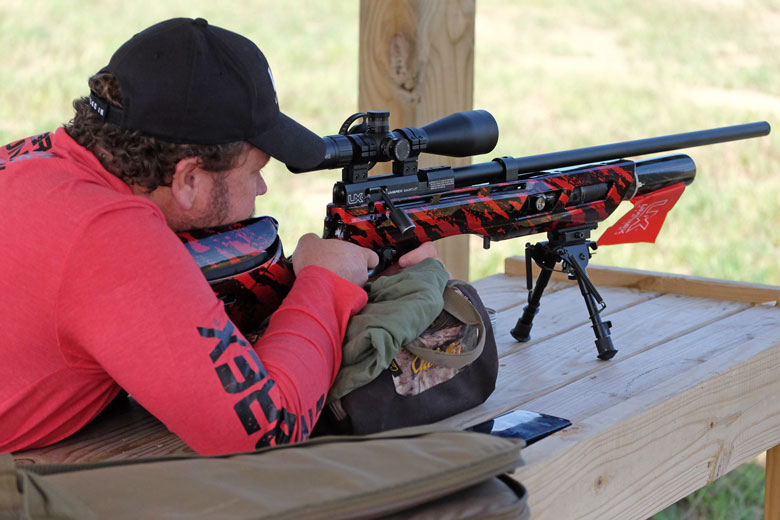 There’s a few Marauders, too. 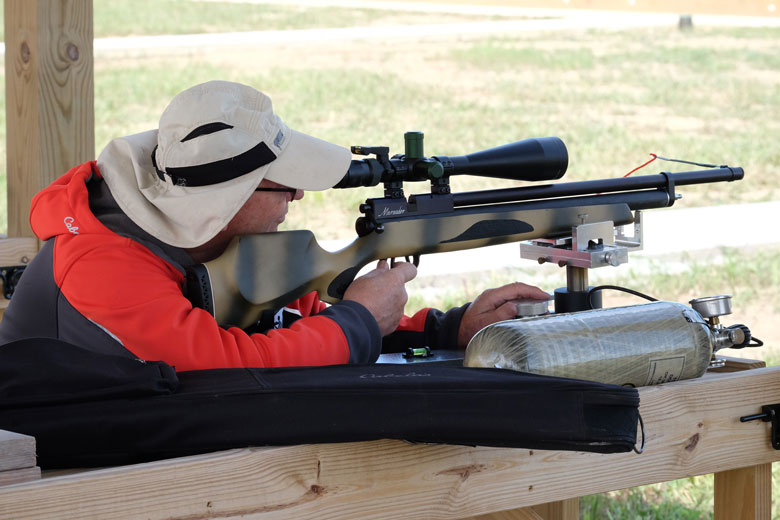 HAM Tester Doug Rogers was making his first attempt at benchrest competition with his FX Crown. 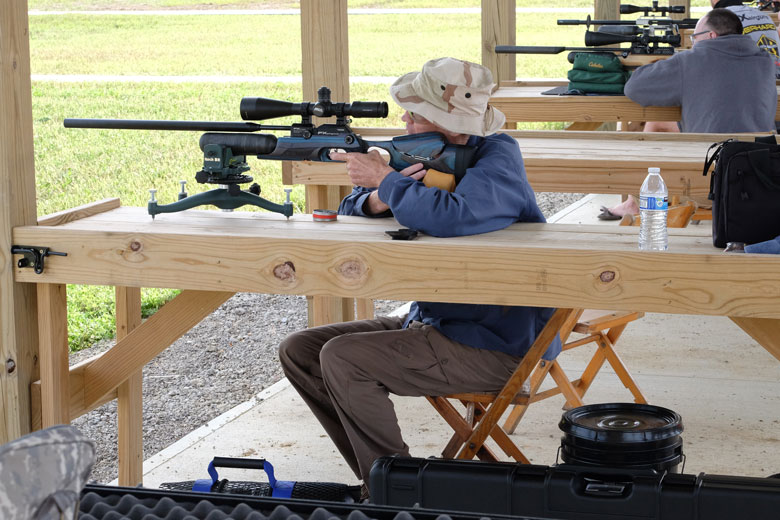 There’s also some more unusual guns being competed. They include this Philippine-manufactured PCP… 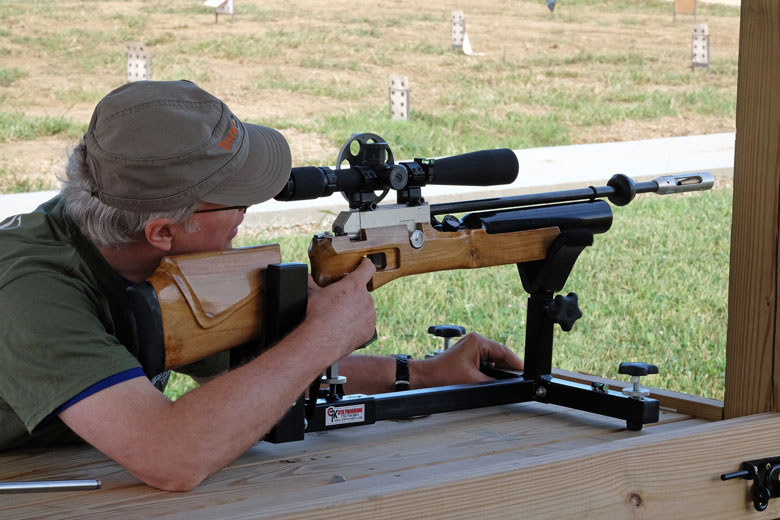 … and this hugely-modifies Discovery. It has two tanks, twin regulators and is in a caliber never offered by the factory! 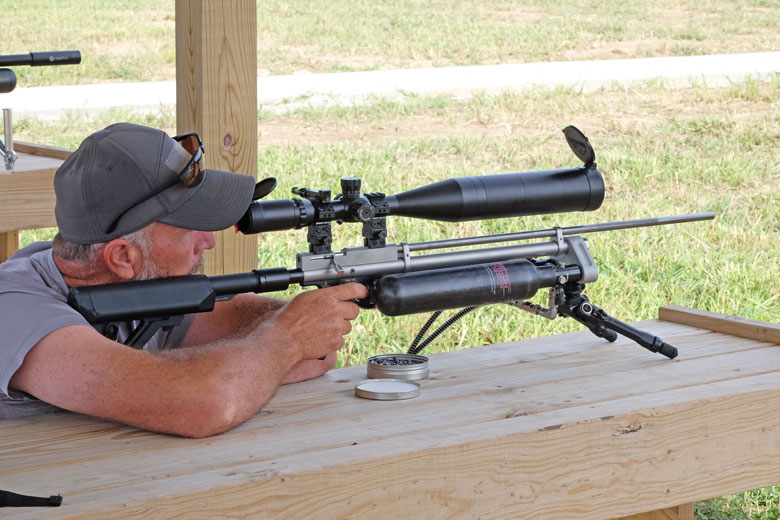 The PA Cup Benchrest competition gave some well-known Field Target competitors the opportunity to try-out the new (to them) discipline, too. Here we see Greg Suave shooting a Daystate Red Wolf. 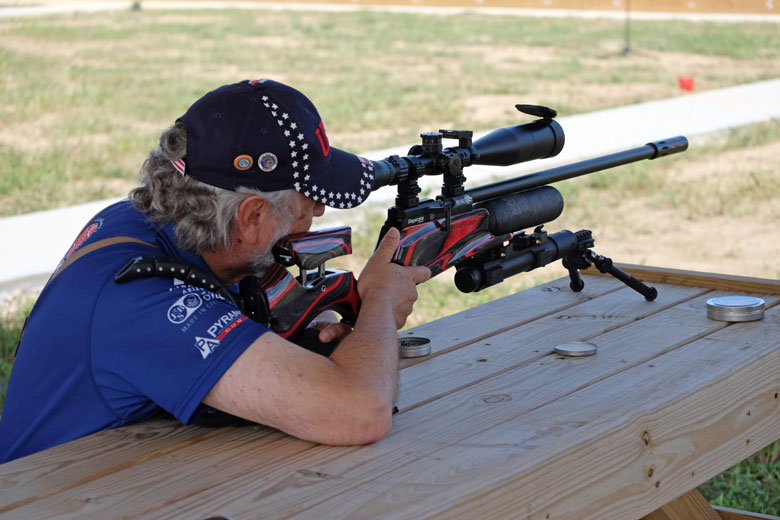 While Bill Rabbitt was shooting an FX action mounted in a stock and shooting rest of his own manufacture. Bill is a machinist and makes many shooting accessories himself. They always show beautiful workmanship! 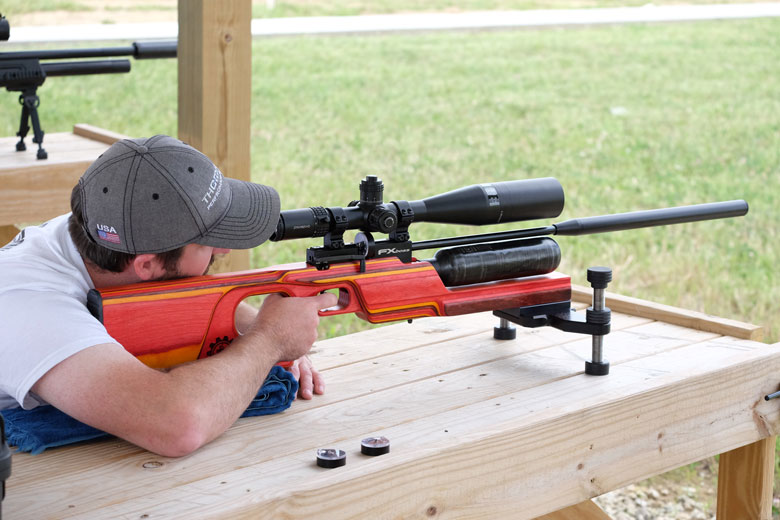 Friday’s benchrest shoot was the qualifying rounds for the final to take place on Saturday. There’s lots more news to come in Hard Air Magazine in the next few days. There’s the Field Target competition, the Gunslynger and more.