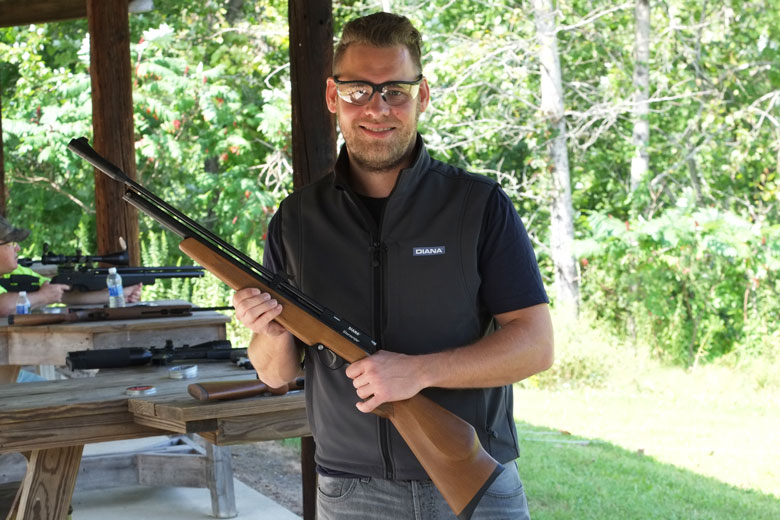 At the 2017 Pyramyd Air Cup, I was able to get a first look at the new Diana Stormrider air rifle.

Tobias Schmidt, Diana’s International Sales Manager, showed me this new PCP air rifle and explained much of the background behind its appearance. That’s Tobias, above.

In fact, the Diana Stormrider is a new venture for the famous German manufacturer in more ways than one. Not only is it a new multi-shot PCP air rifle retailing for less than $200.00, it also is part of a new branding strategy by Diana.

Tobias was very open that the new Diana Stormrider is manufactured in China. It’s no secret, he says. But he also explained how and where Diana is adding value to the product, providing improvements that capitalize on the company’s long history of manufacturing quality airguns.

As part of this, the Stormrider design has been required to pass stringent in-house testing by Diana and to satisfy the company’s Quality Assurance standards.

Diana personnel have visited the manufacturing factory, running a battery of quality tests and checks. Tobias tells me that this – together with ongoing future visits – will ensure consistent product quality for the Diana Stormrider.

And Diana also brings other benefits to the table. Tobias explained that the Diana Stormrider will have improved packaging – a very important issue to ensure that your new gun reaches you in perfect condition.

Also, Diana has working with Air Venturi to be the US distributor for the Stormrider. This means that there will be dedicated US support for any service and warranty issues directly by Air Venturi. Air Venturi will also stock spare parts for the Diana Stormrider.

Although the Stormrider will be sold in most countries throughout the World, the US is the first market where this new PCP air rifle will be available. Tobias expects the first Diana Stormriders to ship to US customers in early October 2017.

Hard Air Magazine hopes to be among the first to run a comprehensive test review on the Stormrider. Watch this space!

As is the case with many customer-focussed companies, Tobias also told me that Diana will be looking for areas for continuous improvement with the Stormrider.

What does this mean? Well it means – he said – that Diana is looking at future up-grades such as different stock designs that could be retro-fitted to any Stormrider. He also said that there could be bundles with – for example – scopes and pellets in future as the gun gains traction in the market.

Tobias also hinted that there will be more exciting new products to come from Diana in 2018. He expects these to be shown at the IWA Outdoor Classics show in Germany in March. But some may be advanced enough to appear at the SHOT Show in Las Vegas in January…