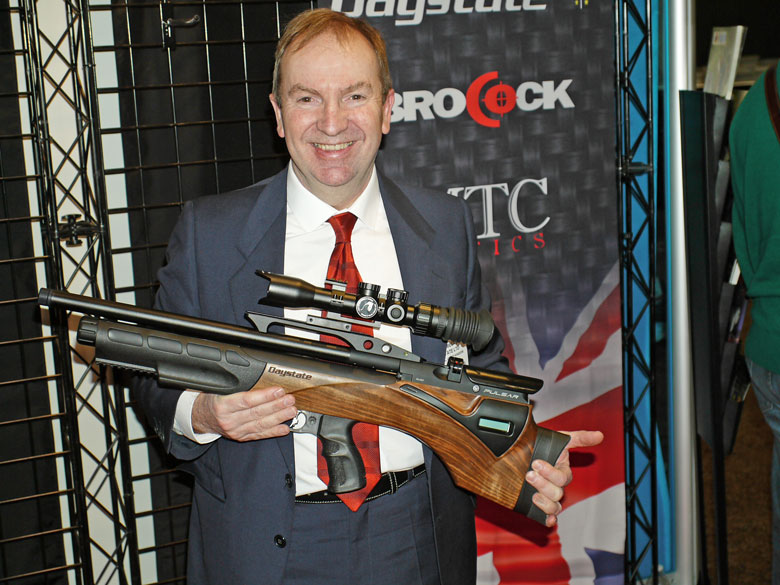 Here’s some of the many more new airguns at SHOT Show 2015!

One highlight was the new Daystate Pulsar, shown above by Tony Belas of Daystate. This is a completely new bullpup PCP air rifle that is planned to be available from the US distributors Airguns of Arizona in the second quarter of 2015. This prototype looked beautiful and the finish was beyond reproach!

Gamo were showing prototypes of several new air rifles. One is the PCP Gamo Coyote in .177, .22 and .25 calibers, here being held by Fedor Palacios of Gamo USA. 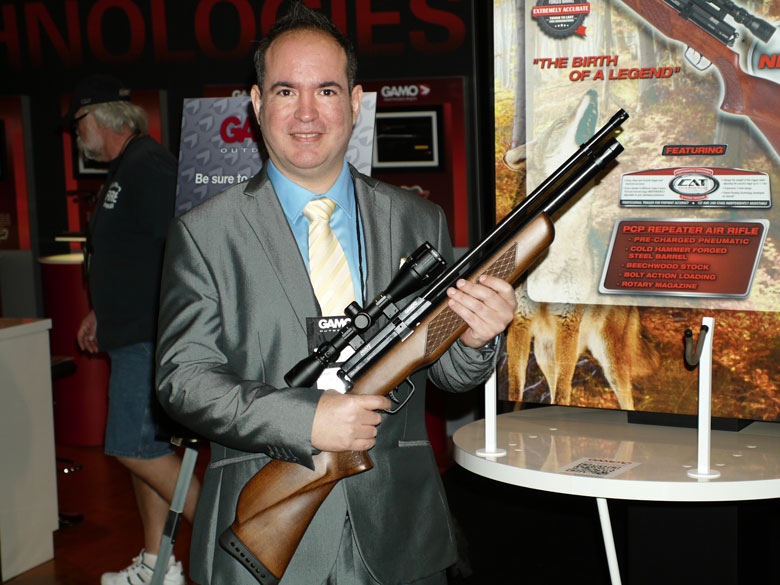 Another 2015 airgun introduction from Gamo will be the Gamo Mach 1 Pigman air rifle that was highlighted by this huge poster. This will be available in both .177 and .22 calibers and will incorporate several new Gamo technology improvements, including the CAT trigger and RRR (Recoil Reduction Rail) that aims to absorb much of the recoil of powerful gas ram and spring/piston air rifles and so protect the scope. 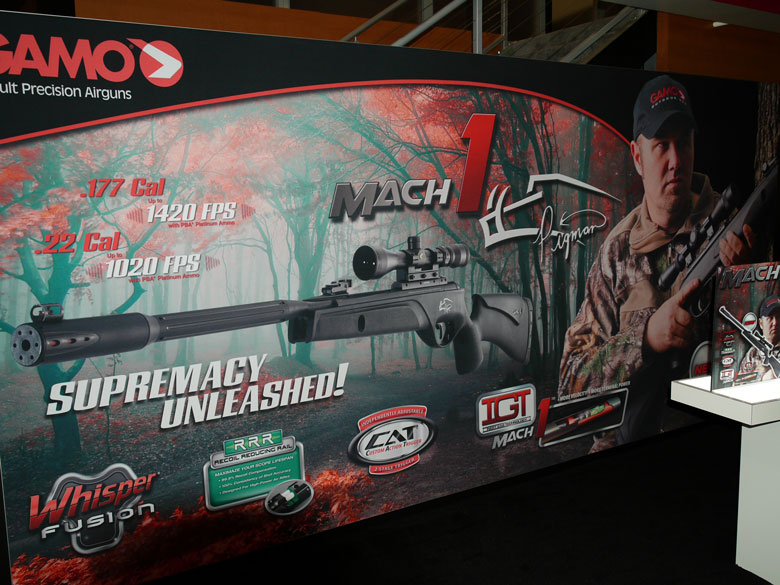 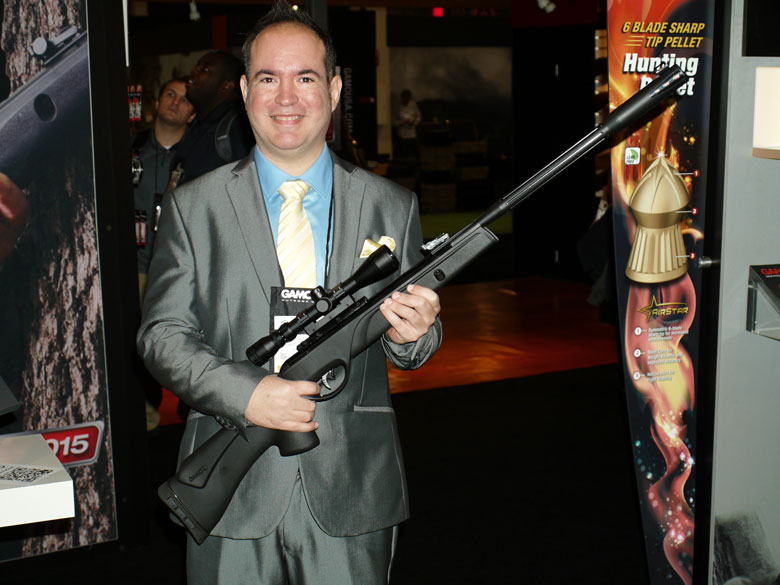 Of course, we had to see the new AirForce Texas air rifle. In .45 caliber, this big bore airgun is big in every sense of the word yet feels light and natural to point and handle.

AirForce claims that the Texan is the most powerful production air rifle yet built with a muzzle energy of 500 Ft/Lbs!!!!!!!

The AirForce Texan has side lever cocking 9 Which felt very easy to operate) and is scheduled for volume availability late in Quarter 1 2015. Maximum power is obtained for 4 shots, but 12/14 shots is claimed to be a realistic number of strong shots from the standard high pressure air tank.

Below we see the AirForce Texan being shown by Cody Monroe of Predator-X magazine. 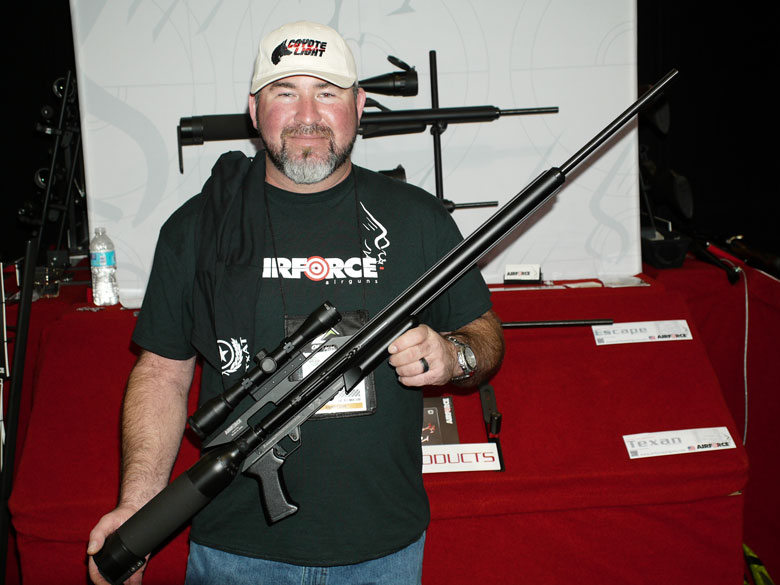 One of the most innovative new air rifles was shown in prototype form by Shanghai Airguns. This very interesting concept builds on the existing very popular Beeman “dual barrel” air rifles that have interchangeable barrels.

Here a Dual by Beeman prototype is shown by Bill Chung of Shanghai airguns. 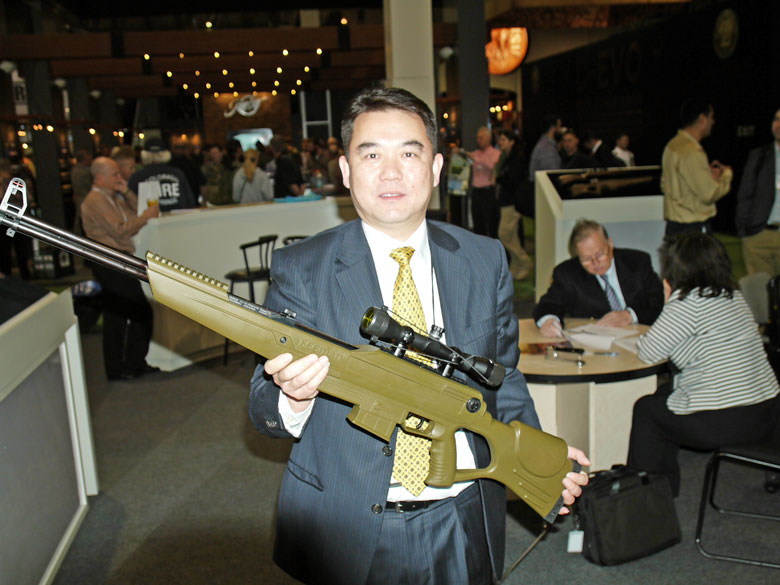 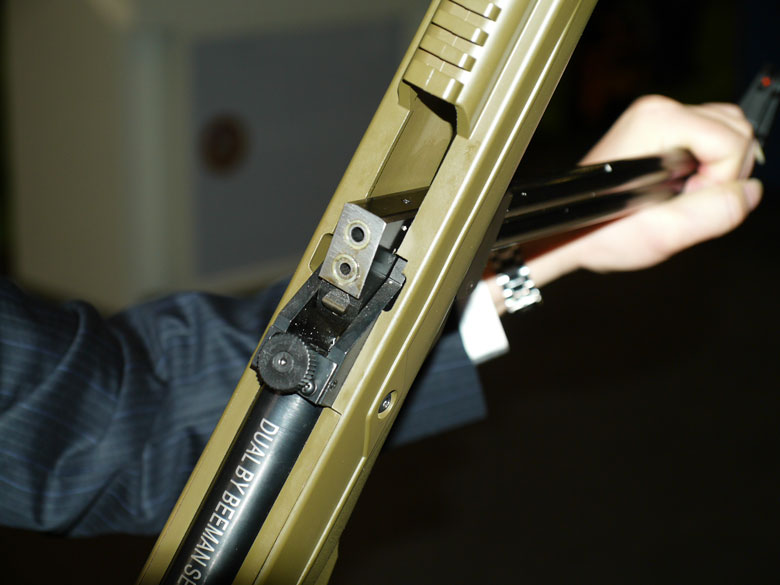