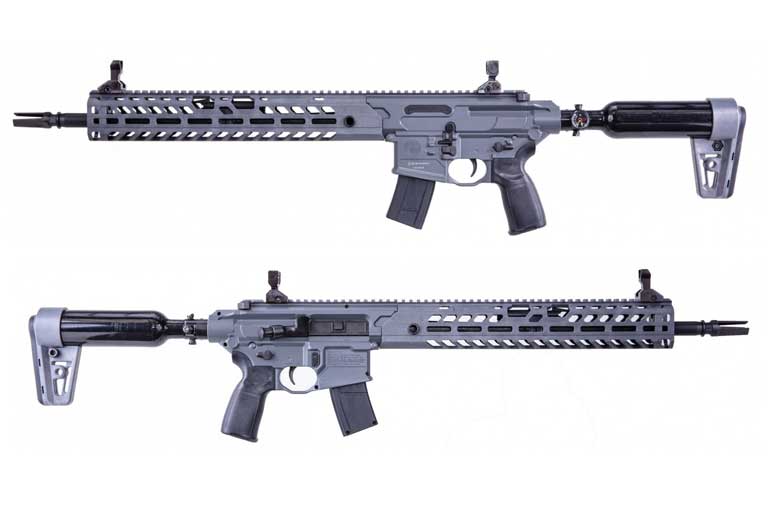 HAM readers have known about the new SIG SAUER MCX Virtus PCP air rifle since back in January. But now SIG Air has formally announced the product, providing additional details, too. This formal launch coincides with its first public appearance at the 2019 NRA Meeting.

Based on the MCX Virtus Patrol Rifle, the .22 caliber MCX Virtus PCP semi-automatic air rifle has a 17.5-inch barrel with M-LOK  handguard for easy mounting of accessories.  It incorporated the SIG proprietary 30-round rapid pellet magazine (RPM). This is used in the  existing SIG Air MCX and MPX ASP air rifles, of course.

Overall length is 37.5 Inches and the weight 7.5 Lbs, plus optical sights if fitted.

The Virtus is powered by a regulated, 13-cubic-inch, High Pressure Air cylinder which effectively forms the stock.

Maximum fill pressure is 3,000 psi and the output is regulated to 1,100 psi ensuring consistent shots.  SIG Air tells us that the Virtus PCP air rifle delivers up to 150 shots per fill.

Of course, this low regulated HPA pressure provides numerous benefits. These include the ability to charge to much less than the maximum fill pressure – say 2,000 PSI – if using a hand pump, yet still achieve many consistent, full power shots.

“The new MCX Virtus PCP Air Rifle is powerful enough to hunt small game such as squirrels and rabbits and is great for pest control in addition to target shooting,” said Joseph Huston, Vice President and General Manager of SIG AIR.  “Unlike CO2-powered airguns, the high-pressure air in PCP models are less affected by extreme swings in temperature, making the MCX Virtus PCP an excellent all-weather airgun.”

“Shooting performance will be consistent, whether shooting on hot summer days or in freezing temperatures,” added Joe.

The .22 caliber MCX Virtus PCP  shoots up to 700 FPS with a peak Muzzle Energy of 11 Ft/Lbs, the company says.

SIG says that the MCX Virtus will have an MSRP of $349.99 and will be available in stores during Summer 2019.

HAM has our order in for this gun. Publisher Stephen Archer enjoyed shooting a prototype at the 2019 SHOT Show. We can’t wait to give it a full, comprehensive HAM test review!