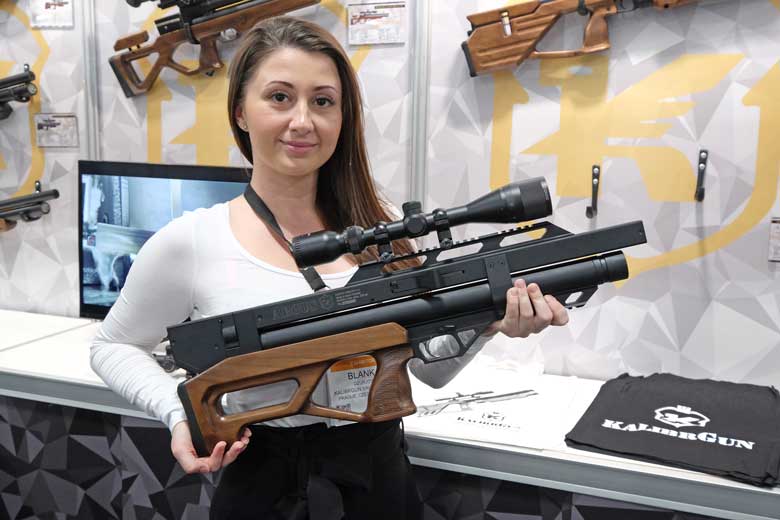 HAM readers already saw a glimpse of the new KalibrGun Argus 45W bullpup PCP air rifle in our report from the 2020 SHOT Show That’s Blanka from KalibrGun explaining its benefits to me in Las Vegas.

Now comes information that the Argus 45W is now in production. The manufacturer tells HAM that it will be shipping to distributors and dealers very soon. 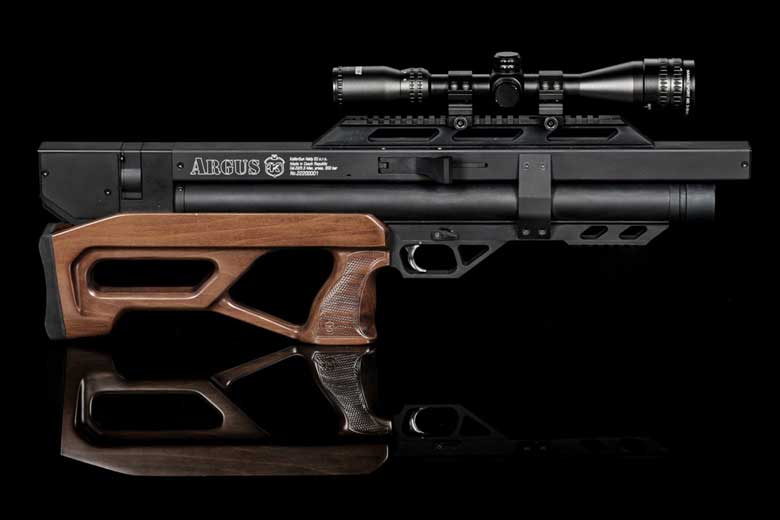 Of course, KalibrGun has long been known for its Cricket models – primarily the bullpup versions. Mike Bricker won the Sportsman’s Class of the Speed Silhouette competition at Extreme Benchrest in 2019 using a Cricket Mini Carabine WST (photo below) – so we know KalibrGuns can shoot! 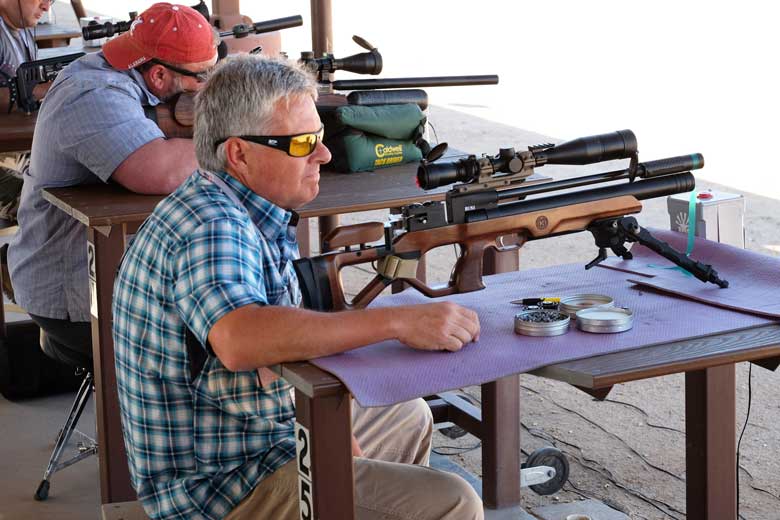 The KalibrGun Argus 45W bullpup is a completely new model that the company says builds on their long expertise with the Cricket. So let’s look at it in more detail…

The Argus 45W is a multi-shot, sidelever, regulated, silenced bullpup PCP. It’s available in .22 caliber. The sidelever cocking system is mounted midships. This makes for easier and more intuitive cocking than with the traditional rear-mounted sidelever location. 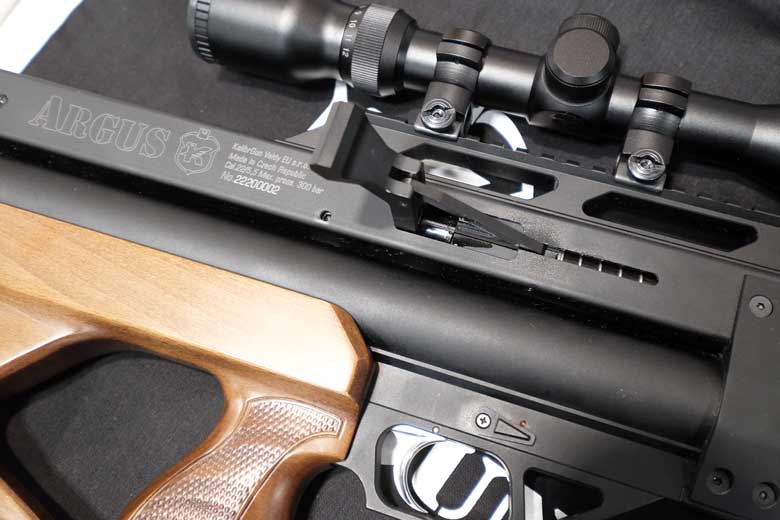 KalibrGun tells HAM that this sidecocking lever system can easily be changed to operate from either the left or right side of the gun. Obviously this will please left-handed shooters!

There’s a new 13-shot magazine, too. This differs from previous KalibrGun magazines in being a closed design. It also is unique – so far as I remember – in that the magazine also has a single-shot mode for single-loading pellets. 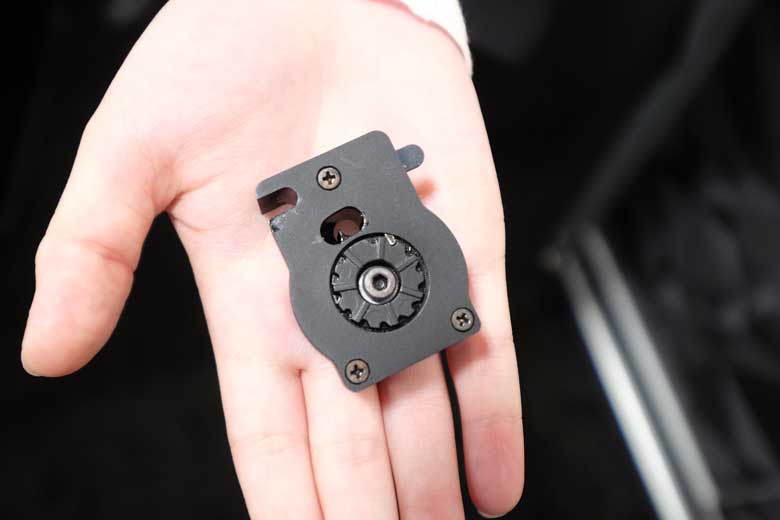 The KalibrGun Argus 45W bullpup has a maximum fill pressure of 4350 PSI. This gives up to 70 shots per fill of the 250 cc HPA tank, depending on the power level selected.

Filling is undertaken using a fill probe. The fill port is at the front of the HPA tube, protected by a pull-forward end cap to prevent the ingress of dirt and other crud.

There’s an internal regulator to provide a long, consistent shot string. KalibrGun says that this keeps shot-to-shot variation as low as 6.5 FPS (2 m/s).

The KalibrGun Argus 45W bullpup is equipped with a forged steel custom rifled barrel. It’s 17.7 Inches long with 12 grooves and is choked. The twist rate is the same as the barrel length – 17.7 Inches. The barrel is surrounded by a multi-chamber moderator for reduced report when firing.

An adjustable trigger and manual safety complete the package. 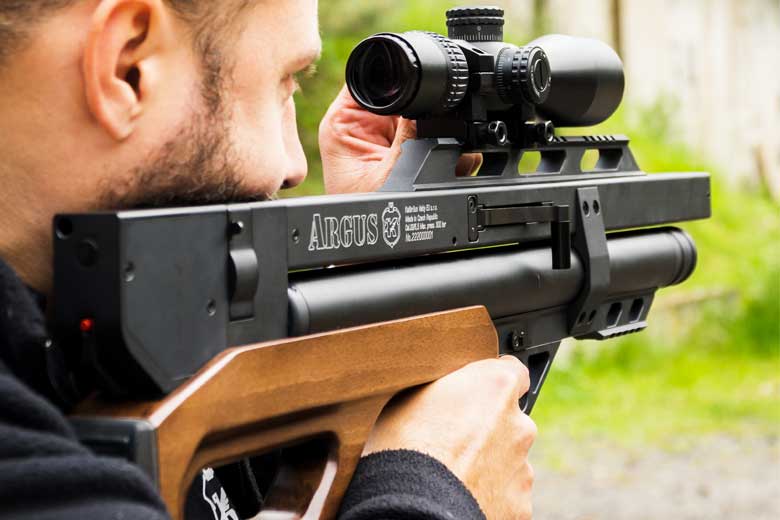 Scope mounting is facilitated by the top Picatinny rail. There’s another at the forend for attaching a bipod or other accessories.

Weight is 7.5 Lbs, plus scope and rings.

HAM hopes to bring you a comprehensive test review of the Argus before too long.It certainly looks like an interesting air rifle!

For availability, contact your KalibrGun country distributor or the manufacturer direct.

We’ve added some more information about the Argus in this more recent post. 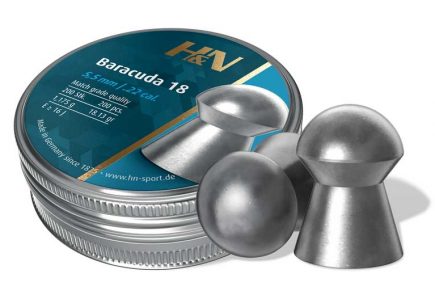 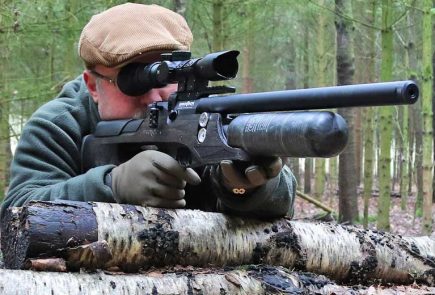 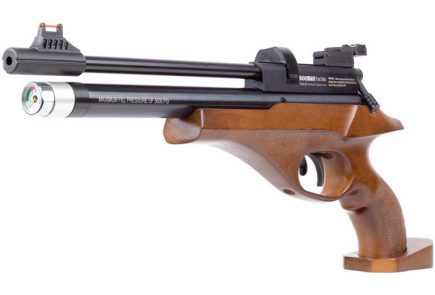