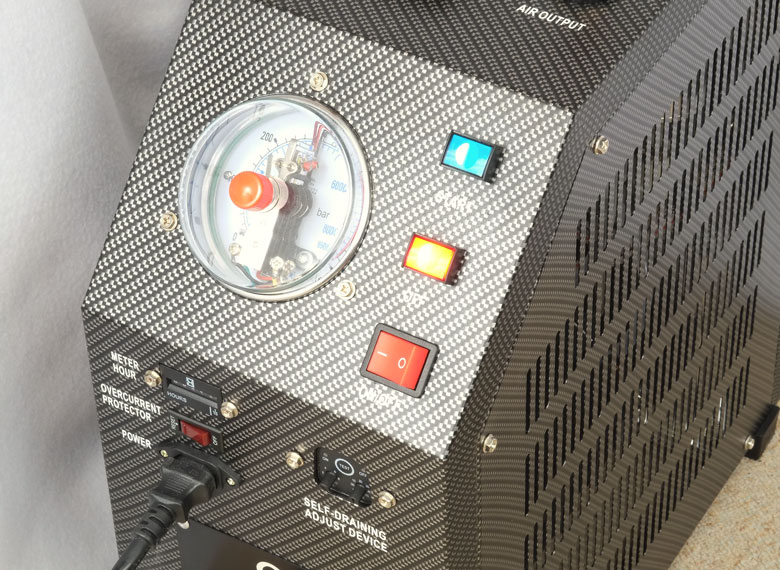 Before talking about the Omega Supercharger Compressor, we need to talk about a problem. Let’s admit it. All PCP shooters suffer from it. It’s air anxiety!

The symptoms are common. For example:
“Do I have enough air for tomorrow’s Field Target competition?”
“I only have a couple of hundred PSI left in the tank, can I still top-up my gun?”
“Oh no, I’m out of air, now I need to drive to the paintball store to refill the tank. Aahhh, but they’re closed today!”

Yes most of us don’t really want to use a hand pump to fill that PCP air rifle. It’s hard work. HPA pumps have somewhat of a reputation for unreliability at the most inconvenient times: mainly, of course, when you need to use them. And there’s always the worry about moisture getting into the gun through a hand pump that has no desicant capability.

So most of us invest in an HPA tank – usually as large as possible – to fill our PCP air rifles.

But the HPA tank still needs to be filled and that’s not always so simple to achieve. Facilities capable of providing 4,500 PSI air are not exactly common and they’re often far from where you live. Or they’re open at inconvenient times.

Hence the onset of air anxiety.

For some sufferers it drives them back to using springers. At least these don’t need an air supply! But then they remember all the reasons why PCP air rifles are so attractive and they relapse back to the need for High Pressure Air. And the air anxiety returns…

So what’s the answer?

You investigate the idea of some ways by which you can fill your HPA tank at home.

Below. The top plate of the Supercharger includes the bleed screw (to the left of the handle), microbore air outlet and observation window for the cooling system. Some HPA compressors actually work as boosters and require you to have a regular (low pressure) shop compressor as well. This may be OK if you do but, otherwise, that’s an additional item to source and locate.

Other HPA compressors are strictly designed for professional use in a commercial environment. They tend to come with the price, complexity and size to match. You realize that it’s not so easy to achieve 4,500 PSI air pressure without a lot of mechanical effort!

Finally you find out about the Omega Supercharger compressor from Airguns of Arizona. A small, plug-in device that’s reliable, simple to use and maintain, almost like a kitchen appliance. Yet it provides dry High Pressure Air at 4,500 PSI, or even more, apparently with no fuss or need for any significant maintenance. It sounds too good to be true. But is it?

Having suffered from the symptoms of air anxiety myself, I have to tell you that no, it’s not too good to be true. The Omega Supercharger air compressor really does work. We have been using one in the HAM offices for some weeks now. it’s really simple to use and there’s minimal maintenance required, if at all.

Below. The compressor is supplied with a “starter kit” of liquids to be added before first use, some grease (in the syringe) and a couple of tools. 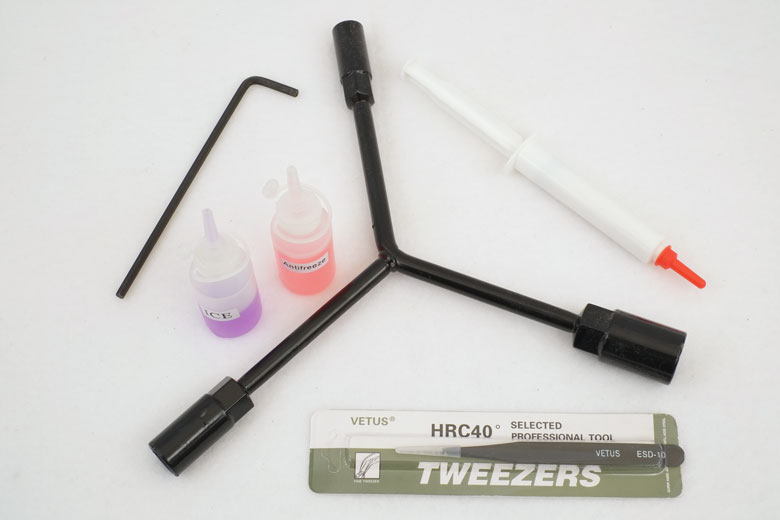 Once you have owned and used your own HPA compressor at home, you’ll never want to go back. This is the official end of air anxiety!

It means that you will shoot your PCP air rifles more often and more shots every time. Air supply is no longer an issue and you’ll rejoice, as we have.

Below. The front of the compressor contains the pressure gauge and on/off switches. Simply rotate the red knob in the center of the gauge to preset the fill pressure desired. Really, there’s very little to say about how you operate the Omega Supercharger compressor works. It plugs in to a regular 110 Volt outlet You press the on/off rocker switch and the compressor is ready to work.

Connect your tank to the included microbore hose. Close the bleed screw on the compressor and hit the green “START” button on the front of the Omega Supercharger. As the pressure builds in the tube, open the on/off valve on your tank. The pressure in the system equalizes and the compressor starts to fill your tank with High Pressure Air. 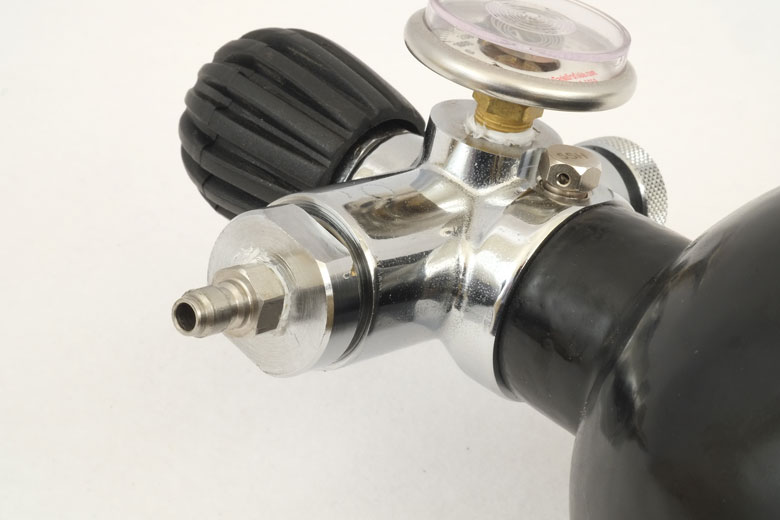 Above, if your tank has a male quick disconnect fitting (most do), the Supercharger’s hose fits straight on. If not, you can buy or make up a simple male/male adapter like this. 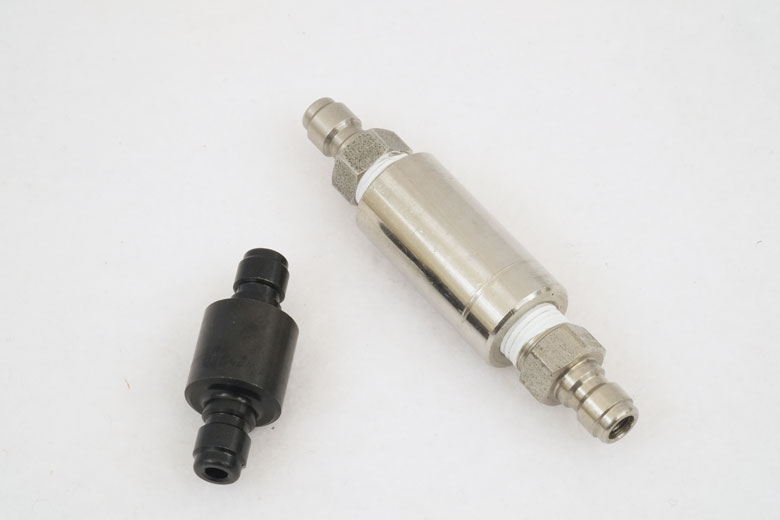 Once the tank is filled to the pressure you selected, the compressor automatically stops filling and sits there in cooling mode with the fan running. Close the on/off valve on your tank. Now simply hit the compressor’s red button, open the bleed valve to remove pressure from the microbore tube and disconnect the tank.

Let the Omega Supercharger run for a further 15 minutes to cool itself down then turn it off. Done!

Yes, it really is as simple as this…

But what about moisture in the air, you ask? Well, the Omega Supercharger has a built-in moisture-purging facility. You dial-in the frequency of purging and the duration for each purge. The reward is a loud hiss at the appropriate times as the compressor automatically purges moisture to your instructions.

To be honest, this moisture-purging part is the only non-automatic part of operating the compressor. We’re taking a trial-and-error approach to setting the frequency and duration of purging, with an emphasis on more purging than might actually be necessary. Don’t want moisture in those HPA tanks! 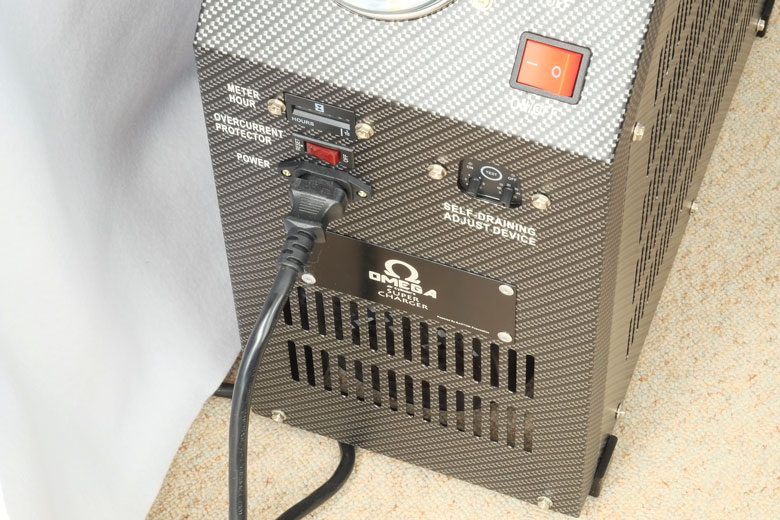 Above. The front panel of the compressor houses the controls for the moisture-draining system and an hour meter that monitors the total running time.

My first thought when the Omega Supercharger Compressor arrived at the HAM offices was that I would conscientiously record the time it takes to fill a variety of tanks – and guns directly, too. Then there would be some “hard” data to give you about the compressor’s performance.

But actually, I’ve completely failed to do this. Why? I think it’s because of the ease of use of the compressor. It requires so little thought to use that I somehow haven’t found the need to measure the filling times. I just start the Omega running and go off to do something else. Each time I return to the compressor, it’s completed its job already!

As we mentioned earlier, this compressor is powered by a regular 110 Volt domestic electricity supply. It just plugs into the wall like any other domestic appliance. No 220 Volt supply is required, a fact that surprised some of the HAM team.

It’s also surprisingly small. The size is about the same as an old vertical-standing computer, so it  takes minimal space. This compact size definitely surprised me, for sure.

Noise level is very reasonable. About the same as a loud dishwasher or tumble-dryer, I’d say. It’s much, much quieter than a typical (low pressure) shop compressor.

So what else is there to discuss about the Omega Supercharger compressor?

Well, you really must read the manual before starting to use it. It’s necessary to fill the cooling system with the contents of a couple of bottles of liquid before first operation. And, as most of us have not used a high pressure air compressor before, it’s vital – in my opinion – to take the time to learn about the product before first using it. That’s what we did.

Below, the comprehensive instruction manual and certificate of inspection. Also, it likes to live in a fairly clean environment without being exposed to freezing temperatures. Remember, the Omega Supercharger is a precision device! For many of us this means that it’s suited to a basement location rather than a garage, for example.

Below. A complete set of seals and O rings is supplied just in case of the unlikely event that you need to replace parts. 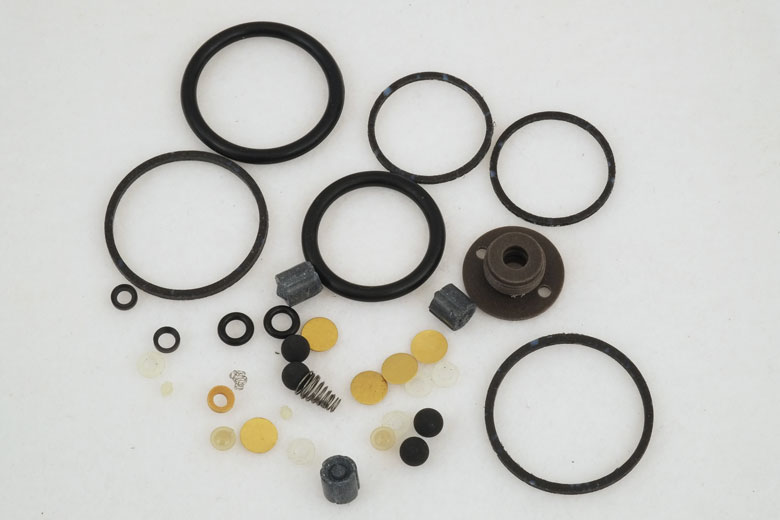 It’s also pretty heavy. About 75 Lbs in its shipping container and still north of 60 Lbs without. So you may want to engage some help to un-box and locate the compressor.

And then there’s the issue of price…

Like most painless, successful treatments for medical conditions, the Omega Supercharger is not exactly cheap. At $1,879, this is not an impulse buy for most of us.

But there’s no question that it really works well. Once you have your own compressor, there’s no way back. It becomes an essential part of your PCP shooting infrastructure. You won’t be able to do without it in future.

Yes, the Omega Supercharger Compressor is the definitive, official, cure for air anxiety! 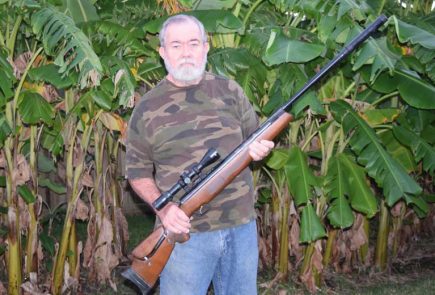 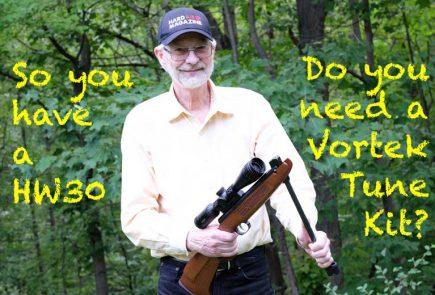 The HW30 Vortek Upgrade Kit – Should You Buy One?
Read More 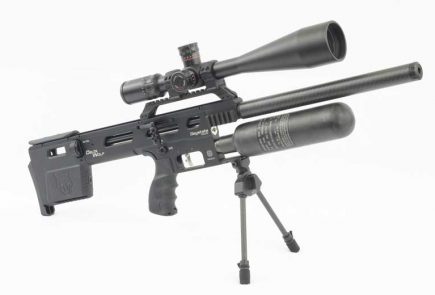