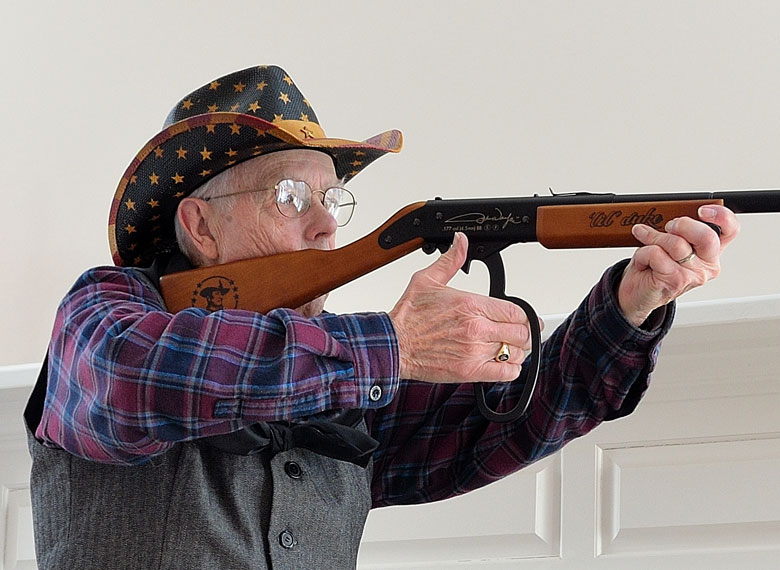 Air Venturi has another winner with the John Wayne Lil Duke BB Rifle!

For those of us who grew up during the era of John Wayne Westerns, there is no other rifle which quite matches the appeal of John’s Large Loop Winchester Model 92. John made a total of 84 westerns from 1930-1976, and in many of those films the Winchester was his constant companion.

The gun was the brain child of John Browning, and was introduced by Winchester to replace the Model 1886 which was designed for black powder cartridges. Chambered for the 44-40, and other smokeless powder hand gun cartridges of the day, the typical Model 92 had a carbine length 20 inch barrel. It was reputed to have one of the slickest actions ever. Legend has it that gunslingers of the day could cock and discharge repeat rounds with one hand! 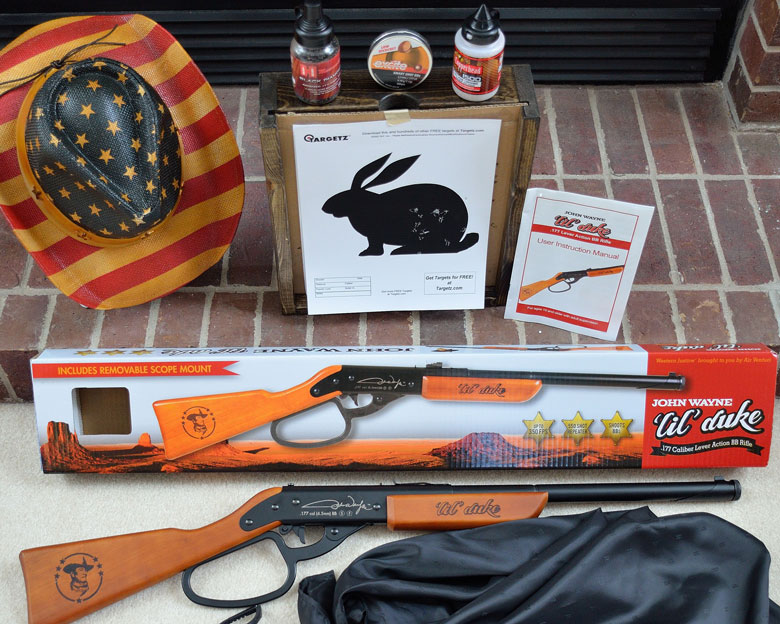 In addition to being the lever gun of choice in many of John Wayne’s movies, the gun with a Large Loop lever was subsequently featured in a pair of Western T.V. Series staring Steve McQueen (Wanted Dead or Alive, 1958-1961) and Chuck Connors (The Rifleman 1958-1963).

So the Large Loop lever inspiration for the John Wayne Lil Duke BB rifle became synonymous with the Model 92. Many probably don’t even know that the gun was also available with a standard lever. That made it near identical in profile to Winchester’s most popular lever gun, the Winchester Model 94.

Winchester recently has re-introduced the Model 92 with a Large Loop lever in the popular 44 Magnum handgun cartridge. So while the gun has not been in continuous production by Winchester for 125 years, it is nice to know that the center fire version of this gun is still produced under the original Winchester name.

The guns appear to be identical, except that the Annie Oakley model has Annie’s profile on the stock, and her signature on the side of the action. That gun features the classic Winchester Model 94 cocking lever.

But that’s not all. Air Venturi now has six different John Wayne Signature western revolvers, and an attractive assortment of leather holsters and belts. When I was a budding cowpoke growing up in Goshen, Indiana, I was holstering a cap pistol in my “simulated leather” (actually cardboard) holster.

Wow, would I have been in cowboy heaven with the John Wayne Lil Duke BB Rifle and others in Air Venturi’s lineup of western rifles, revolvers and leather! 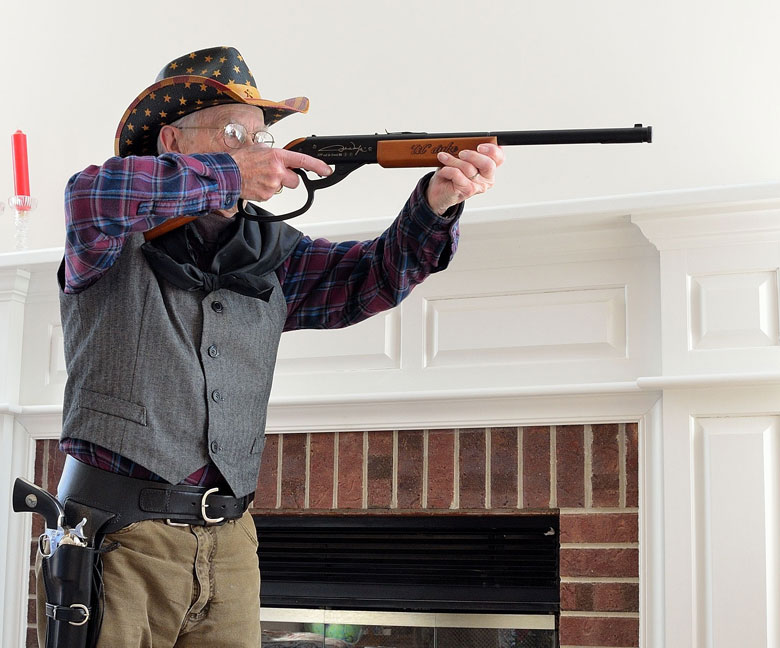 The John Wayne Lil Duke BB Rifle arrived securely protected by foam in an attractive box. Inside, I found an Air Venturi users manual which clearly identifies how to load, unload and shoot the gun safely.

I had ordered one of the John Wayne Lil Duke BB Rifle bundle kits, so the gun actually came with an excellent set of safety glasses and a container of Excite, low ricochet Lead BBs.

We discussed these projectiles in the past. They are copper clad, and they not only trip the striker on an Air Venturi field target, they won’t ricochet when they strike the metal surface.

I wanted to know how the John Wayne Lil Duke BB Rifle would handle traditional steel BBs, so as part of my test, I fed it Crosman, Hornady and Daisy steel ammunition. There’s no telling what a consumer will feed the rifle once it leaves the factory! So I wanted to know if it would feed any standard BB product available to the customer. Not to worry – it did.

The John Wayne Lil Duke BB Rifle just begs to be shot from the shoulder in traditional cowboy action style shooting. So I decided off hand would be the best way to test it. 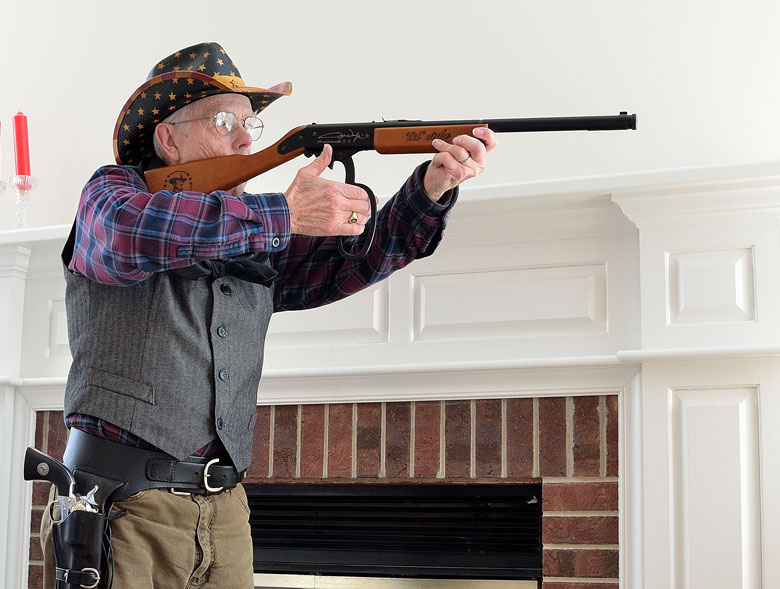 It seemed non-productive to set up bulls eye targets and measure group sizes on a gun which is intended to be shot like John Wayne would have shot his Winchester Model 92 back in the 1940’s.

I owned a Winchester Model 94, Trails End Lever Carbine in 44 Magnum, and I can tell you the gun is NOT meant to shoot bulls eyes! If I could keep hand cast bullets in a 5 inch circle off of the bench, I was happy.

But I didn’t shoot the John Wayne Lil Duke BB Rifle that way. I shot cowboy action targets at point blank range as fast as I could work the lever, and that is probably how most youngsters will shoot this gun.

The quality of the workmanship on the John Wayne Lil Duke BB Rifle seemed excellent. Both the wood and metal finishes are quite attractive, as you can see by the photos. And the gun is rugged.

I understand an earlier version of the gun had a plastic lever. However current production guns have a good quality metal large loop lever.

The John Wayne Lil Duke BB Rifle is easy to load through the small port in the bottom of the barrel. It’s also easy to unload. You just rotate the muzzle counter clockwise about half a turn, then pull out the barrel assembly just far enough to dump out the BBs you decided not to shoot.

A cross bolt safety right behind the trigger is a vital part of safe gun handling with the John Wayne Lil Duke BB Rifle. All kids should be taught how to operate it correctly!

The standard open rear sight has a step adjustment elevator. Combined with a rugged post front sight, this was easy to use.
And the stock is very securely anchored to the action, so it shouldn’t wobble over time. The force required to cock the John Wayne Lil Duke BB Rifle is about standard for lever BB guns. So I would be surprised if a youngster could re-cock the gun without taking it down from his shoulder.

It’s actually harder to cock the John Wayne Lil Duke BB Rifle from the shoulder than my Winchester Model 94. But then the Model 94 didn’t have to compress a propulsion spring.

The best part about the gun is the trigger. The trigger pull on this gun was surprisingly light. It measured a delightful 3 ¾ pound pull. Light guns like this John Wayne Lil Duke BB Rifle (2.6 lbs) are easy to pull off target if they have a stiff trigger.

There was creep, but that is standard fare for BB gun triggers. If you are shooting rapid fire at large targets at standard BB gun range, you won’t even notice the creep. 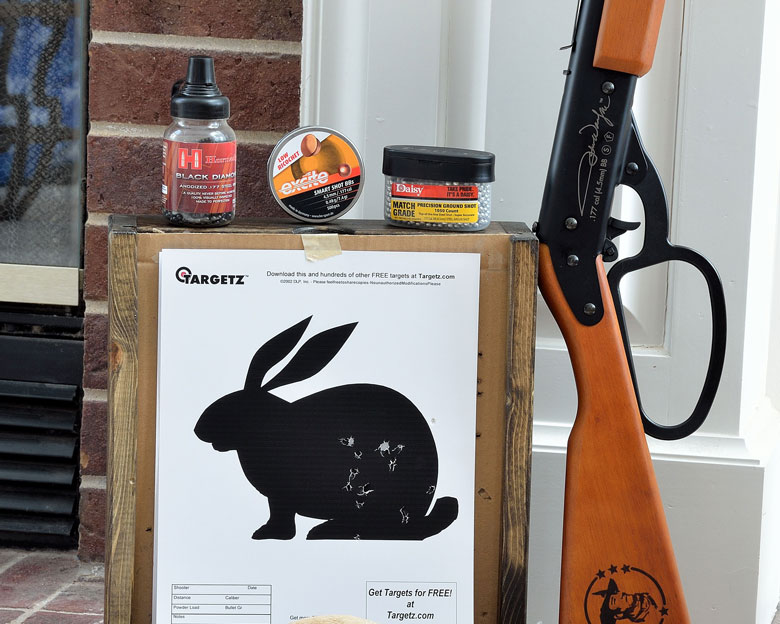 The sample target you see here was shot at 5 Yards, as fast as I could cock the gun and pull the trigger. I launched 20 BBs at the target, averaging one every 5 seconds. I was able to keep all of the shots on the bunny profile save one.

A youngster with better reflexes could probably do better with his or her John Wayne Lil Duke BB Rifle!

In summary, if you are looking for a target BB gun which will allow a youngster to perfect his marksmanship, this may not be your gun.

But if you are looking for a family heir loom which will remind you of the John Wayne Western you saw in cinema as a kid; a gun authenticated with the Duke’s signature and profile, then the John Wayne Lil Duke BB Rifle is your gun…