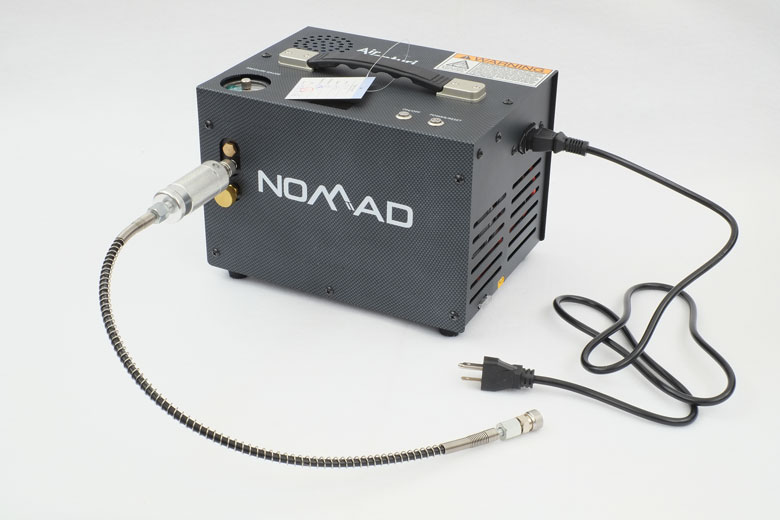 HAM Reviewer Doug Wall has been spending some time getting to know the new Air Venturi Nomad II Compressor. Here’s his review of this very interesting product.

I’ve been testing the Air Venturi Nomad II compressor for the past couple of weeks. This is a very nice, compact HPA compressor. It can run off 110VAC, 220VAC, or 12VDC supplies. That makes it a very versatile tool.

It’s as a nice compact package, 11-Inches long, by 8-Inches wide, by 8-Inches high. Unlike the original Nomad, the 220-110VAC to 12VDC power supply is built into the case, so there no other adapters that you need to carry around.

It also comes with a very nice padded cordura carrying case. They really do mean this as a compressor that you can take with you! 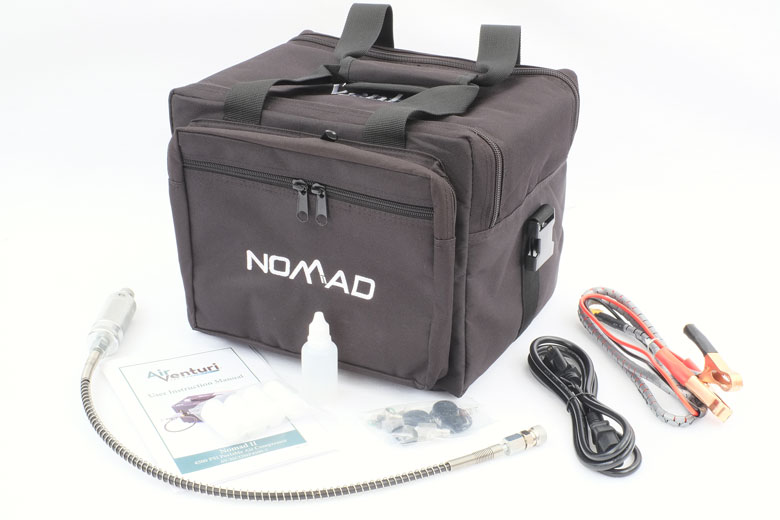 My initial impressions are that the Nomad II compressor will work well for low to moderate HPA air users.

It doesn’t have enough capacity to feed things like scuba or SCBA tanks. So it should be limited to filling guns, and smaller “pony” type tanks up to perhaps the 48 cu in range. Just as the manufacturer says!

Overall, the package seems to be very well thought out. But there are two things that caused me some head-scratching. They both happen to be located on the underside of the unit…

Firstly, the “underbody lighting”. It’s not something that I would probably ever use, and the plastic plate that covers it was already cracked when I received it. It’s a feature that could probably be left out to keep the price down a bit. 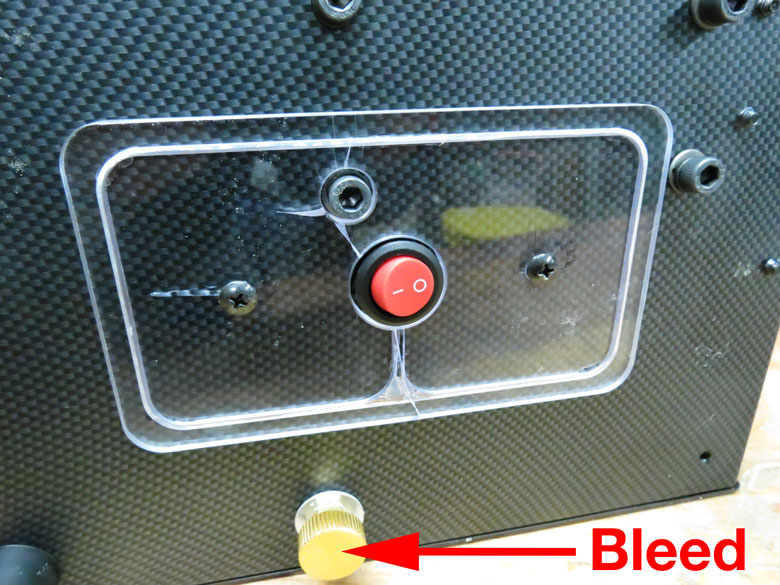 Here’s a pretty accurate representation of what it looks like in my dark workshop. It lights up the surface that it’s sitting on, but you’ll still need a flashlight to read the gauge, or do anything else. 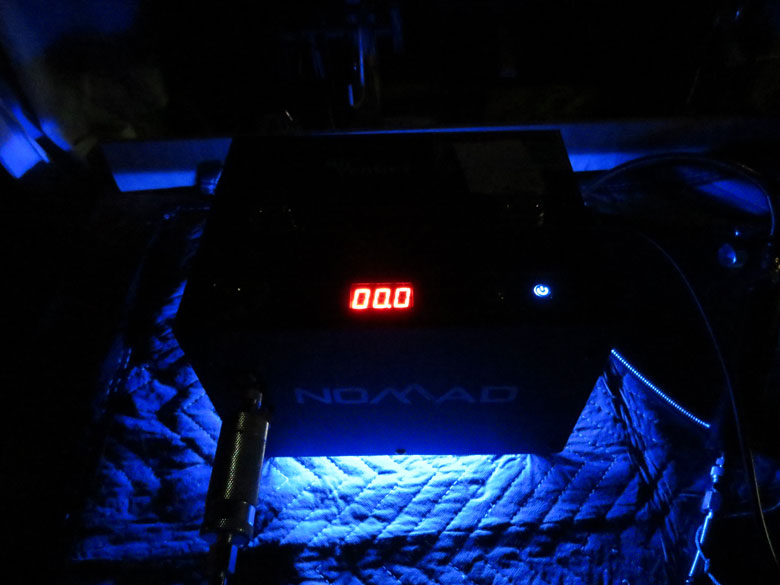 The other issue is the moisture drain.

Obviously it’s good to see this feature included in the Nomad II compressor. But it’s on the bottom of the unit.

With the normal feet that come on the Nomad II compressor, I couldn’t easily get my fingers underneath to operate it!

The Nomad II does come with small extenders for the feet, but even with those, I need to have the compressor on the edge of a bench to operate the drain. 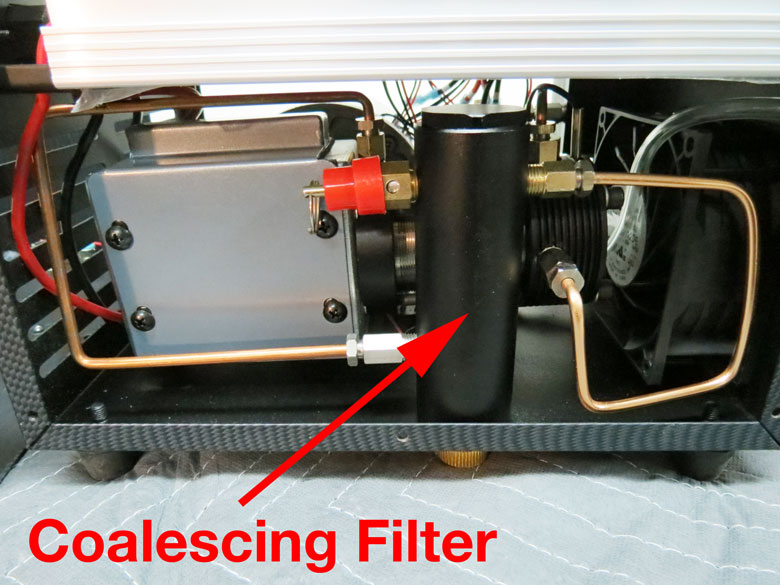 I’m not seeing moisture in the output stream of the Nomad II compressor, either in the normal pressure bleed, or in an indicating desiccant filter that I put in the line.

One concern when using any kind of home compressor or hand pump, is moisture getting into guns or tanks, and the resulting corrosion.

In order to keep moisture out of my guns/tanks during this testing, I added a medium sized desiccant filter in the output line. This is an inexpensive (about $30) filter, that doesn’t add too much to the fill times. 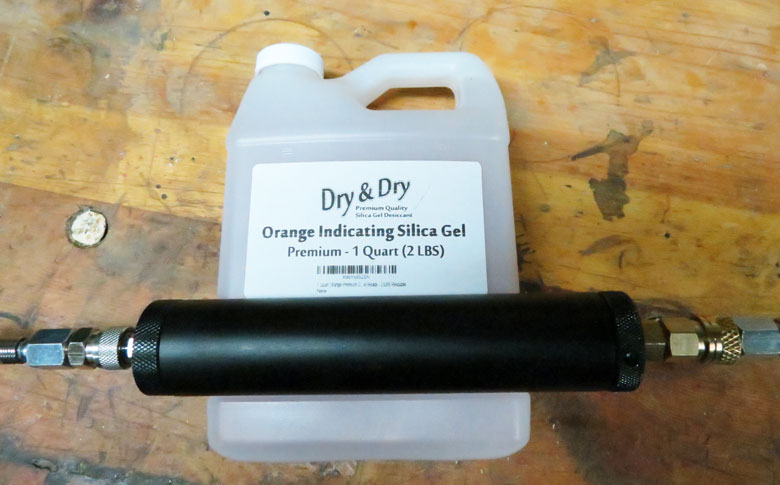 To monitor any moisture, I replaced the charcoal/calcium chloride mix in the filter with indicating silica gel. There has been no sign of any color change – and thus indication of moisture – during the course of my testing so far. That’s good!

First, hook up your choice of hoses/filters to your gun or bottle and MAKE SURE THAT THE PRESSURE IS RELEASED! If not, the fuse will blow, and other things might also happen, as you’ll read below.

Now plug in the Nomad II compressor (the power supply fan will start) and set your desired shut off pressure. Close the vent valve, turn on the power reset switch. The compressor cooling fan will now start. Turn on the start switch and the compressor will start.

The Nomad II compressor runs with a steady chug-chug-chug, not the high speed “buzz” of other, low cost, but higher capacity compressors.

When the desired pressure is reached, the compressor will shut off. Release the air pressure release valve on the side of the unit, and disconnect the hose.

The top panel contains a load meter. This indicates how much load is on the motor. It will shut the compressor down if it exceeds 29. 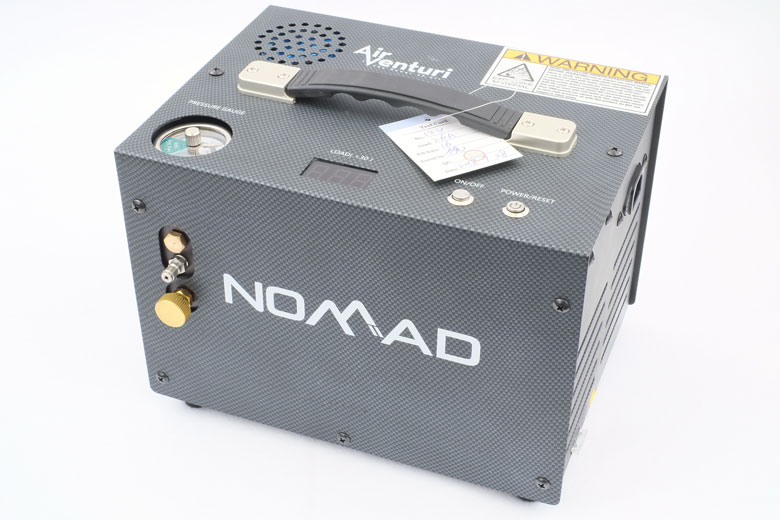 The manual says to lubricate the compressor if the load gets to 28. To me, this seems too close to the 29 shutdown for comfort! I’d do it well before that…

During the 45 minutes of run time that I put on it, over about 12 sessions, the load gauge stayed in the 22-23 range.

I also tested how the Nomad II compressor runs from a car battery. It runs well on 12VDC, but keep in mind that it’s drawing about 30 amps. That’s a significant load. The cable and battery clamps are warm after a five minute run!

The manual doesn’t have a warning, but I don’t think that it would take too long to drain a car battery down to the point where it won’t start the engine.

If you are using the Nomad II to make fills out in the field, make sure to run the engine so that you don’t end up with a dead vehicle.

As mentioned before, the Nomad II compressor is for filling guns and small tanks only. This would include tanks up to about 48 cu in.. My testing was for 3000 PSI tanks only (I don’t have a 4500 PSI tank).

Fill times are quite reasonable. Here’s some typical times I found:

Remember, Pyramyd Air clearly positions the Nomad II compressor as NOT for filling large tanks. My 52 cubic inch tank is a 3000 PSI scuba pony bottle. I think that filling a 48 cubic inch, 4500 tank would be a chore for this compressor.

During my testing, I accidentally started the compressor while it was under pressure. It immediately blew a fuse, and also fried the control board.

So, I phoned the service people at Air Venturi. They understood the issue and had the parts available.

Since I have extensive experience working on mechanical and electronic assemblies, they immediately shipped me a replacement circuit board and gave basic guidance on what to do. In my opinion, this was excellent service!

This level of support is a big benefit of buying the Nomad II compressor rather than a “no name” alternative where support and spares may – or may not – be available.

Firstly, I number the wire pairs (there are 9!) before taking the old circuit board. 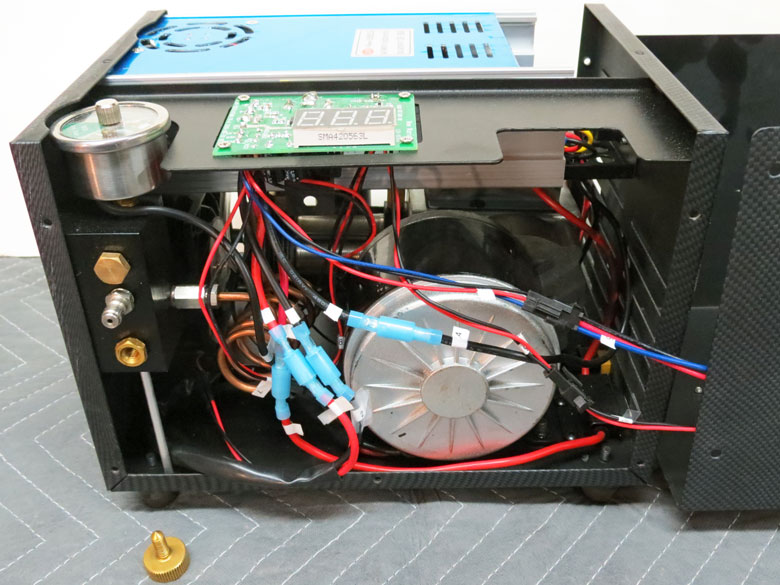 After I took the old board out. I put it side by side with the new one, and numbered the wires on the new board to match. 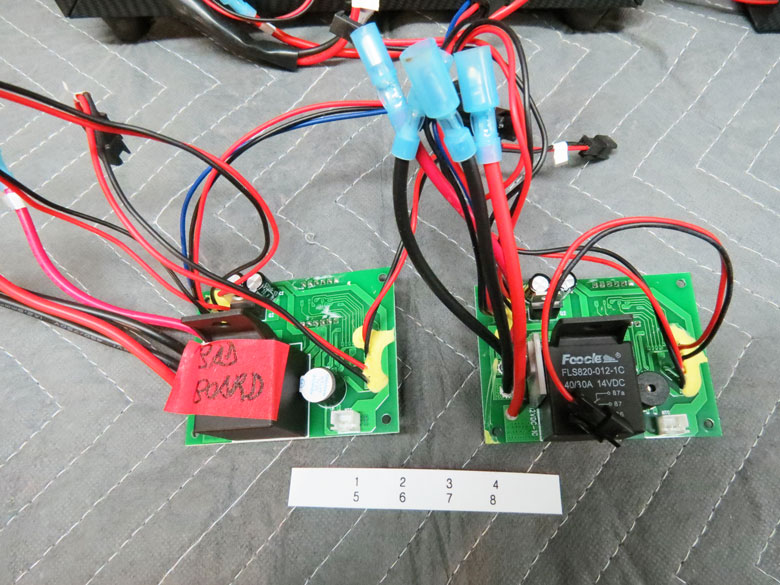 By matching the numbers in the compressor, with the numbers on the new board wires, I was able to fix it successfully.

How could this happen to me?

You think, ”OK, I’ll just reset the shutoff to 3000 PSI and start it back up”. BANG, blown fuse, and possibly the board!

I have since added a “ZERO PRESSURE BEFORE STARTING” label, right by the start switches, as a reminder to prevent a recurrence. 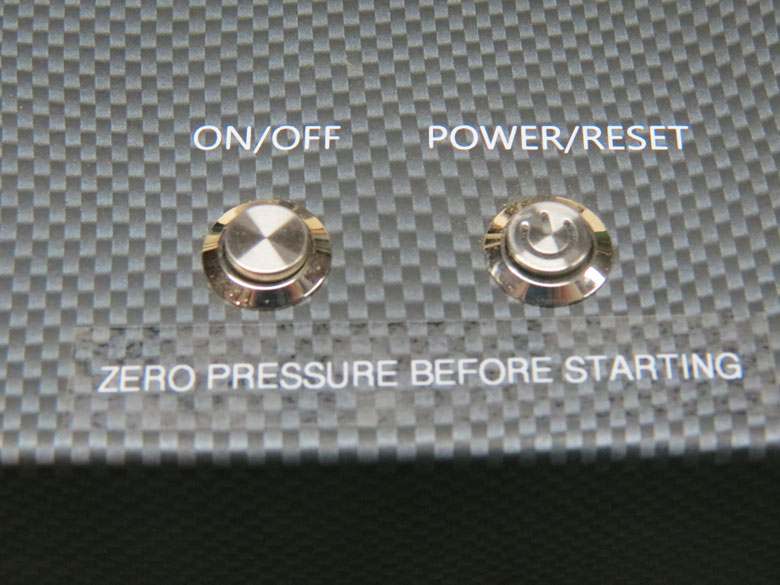 Hopefully, now you and I will both be able to avoid this potential problem!!

The Nomad II compressor has a one year warranty. But even though it ships with spare o-rings, seals, and valve springs, there are no instructions on how the replace them. If the unit is incorrectly assembled by you, it invalidates the warranty.

So if you do have any problems with your Nomad II, you need to call the Air Venturi service department! Just like I did…

When combined with a small “pony” type tank that could be carried in a backpack, to provide a few fills in the field, this would be a great unit.

In my testing, the output of potentially-damaging moisture in the HPA generated was clearly well controlled.

Knowledgeable service support and parts are available in the unlikely event that you should need them. 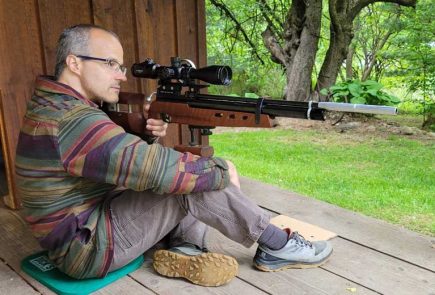 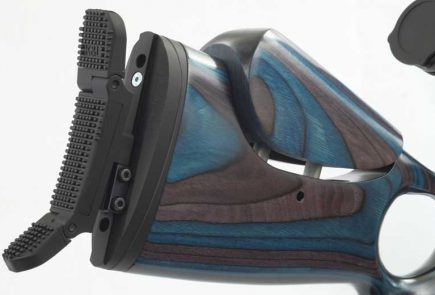 Why Some HPA Fittings Don’t Fit