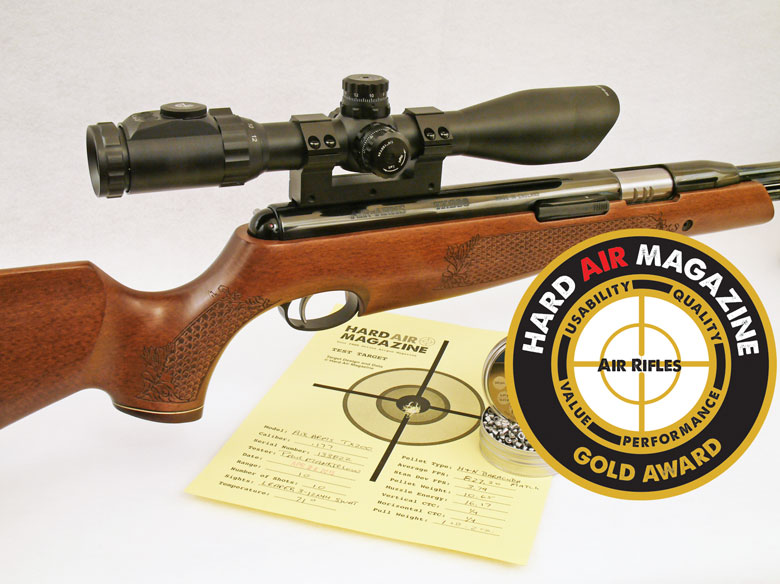 Small amount of previous use as a sample/tester.

If you want to compete with the best in Field Target competition, the Air Arms TX200 air rifle is ready straight out of the box.

The TX200 has appropriate muzzle velocity and the accuracy that's demanded for FT shooting. The trigger is superb and the gun is just beautiful. The fixed barrel and underlever cocking system appeal to many springer shooters.

This is not a light air rifle, it's solidly built and has a good, solid shot cycle. It gives the feeling of quality that will last a lifetime's use.

Yes, you can hunt small critters and plink with a TX200 if you want. But it's on the range that this airgun really shines!

For its combination of quality, usability, value and performance, the Air Arms TX200 air rifle receives a HAM Gold Award.

With right-handed Beech stock, the Air Arms TX200 is priced at $630. As tested with scope and mount in the PyramydAir Premium Bundle, the price is $756.16. Yes, you could spend more on the scope and mounts, but this bundle makes a very viable tool for participation in Field Target competition at the highest level. If required, you could upgrade the scope later.

For this money, you receive a beautiful, impeccably finished air rifle that can deliver outstanding accuracy in the right hands.

The Air Arms TX200 air rifle is a simple gun. There’s relatively few parts, but quality does not have to mean complexity! The TX200 has a quality born of simplicity. If you value this approach to air rifle design and are looking for quality and accuracy, rather than just maximum muzzle velocity, this gun will deliver lasting value for money to the discerning buyer.

The Air Arms TX200 has a long reputation as probably the most successful spring/piston air rifle in Field Target competition shooting. The results of this HAM test review clearly show why…

Accuracy was excellent with most of the pellets in the standard HAM test suite – including all the mid-weight and heavy pellets.

Although accuracy was also quite good with the H&N Field Target Trophy Green alloy pellets, buyers of the Air Arms TX200 air rifle are mostly not interested in high muzzle velocity. They understand that the best practical accuracy with a spring/piston air rifle in .177 caliber is obtained with medium to heavy weight pellets and a muzzle velocity in the sub-1000fps range. This is what the TX200 delivers.

HAM tester Paul Manktelow is a TX200 owner himself. He expected this level of performance and wasn’t disappointed by this test gun. He did note also that the Crosman Premier Hollow Point pellets were a tight fit in the breech of this specific test gun.

For those concerned with ultimate muzzle velocity, the Air Arms TX200 air rifle is not really a contender. It doesn’t try to be. What this gun delivers is great accuracy with heavy lead pellets, combined with sufficient muzzle velocity to make the shots count at 50 yards – or more.

Yes, the TX200 did pull nearly 1200fps with the H&N Field Target Trophy Green alloy pellets, and with surprisingly good accuracy, but very few owners will consider such light pellets as appropriate for the shooting they do.

Right out of the box, the trigger of the Air Arms TX200 air rifle tested by HAM was just perfect!

Pull weight averaged just 1 lb 5 oz with no danger of unsafe discharge at this light weight. The two-stage trigger is adjustable for pull weight and travel, of course, but this is unlikely to be required by even the most discerning shooter.

The first stage is very light, with a clean, predictable transfer to the second stage and a “glass like” break to release the sear and fire the gun.

There’s an automatic safety which – as always – is disliked by the HAM testers, but it works well and is conveniently placed. If required, the safely can be re-set simply by re-cocking the gun. 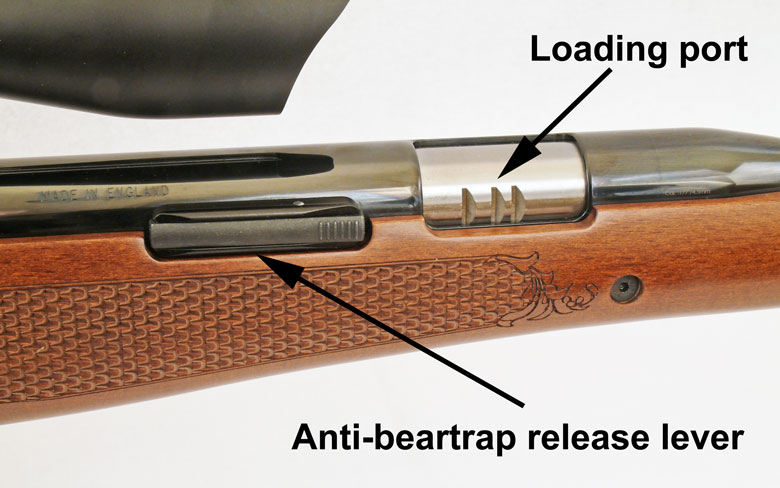 Cocking effort for the Air Arms TX200 air rifle tested by HAM was a reasonable 34 Lbs.

The cocking arm pulls down smoothly and with a satisfying feel. But first, you need to pry that underlever free from its latch. This is probably the only real weak point of the whole TX200 design…

Releasing the cocking arm from its barrel-end latch is surprisingly difficult to do. It’s necessary to force your fingers between the barrel and the cocking arm and pry the arm free. There’s no grip on the cocking lever, either.

There’s a small rubber bumper on the underside of the barrel that’s intended to prevent contact between the barrel and cocking arm. However this always breaks off after a very few shots (it was broken off on the HAM test gun when received and the same thing happened rapidly to HAM tester Paul Marktelow’s own TX200). So we adopted the usual remedy and fitted two suitable O rings into the slots at the end of the cocking arm. 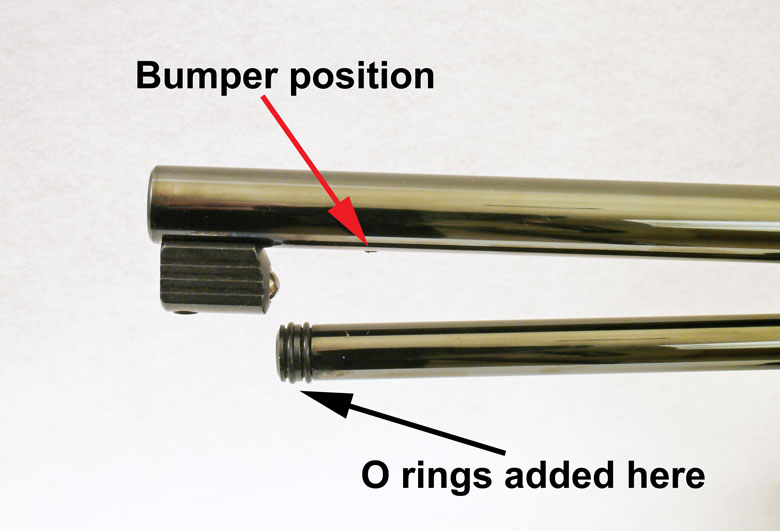 Few performance claims are made for the Air Arms TX200 air rifle. The muzzle velocity for US-specification guns is given as 930 fps (presumably with lead pellets?).

The gun tested by HAM easily exceeded this claim even with 7.9 grain Crosman Premier Hollow Point pellets (960 fps) and went on to demonstrate nearly 1200 fps with 5.56 grain alloy pellets.

The only other claim is for cocking effort. The claim is that 29 lbs of force is required to cock the TX200. The example tested by HAM required 34 lbs.

As indicated above, it shoots most of the HAM standard test pellets – and all the heavier ones – well. Standard Deviation (a measurement of muzzle velocity consistency) is very low: down to an amazing 2.0 fps with the H&N Field Target Trophy Green alloy pellets. The average Standard Deviation across the whole of the HAM pellet test suite is just 7.3 fps. Very commendable!

The Air Arms TX200 is not a silenced air rifle, although there is a shroud around the Lothar Walther barrel.

This shroud is approximately 3 1/2-inches longer than the barrel itself. It’s unlikely to be intended as a noise reduction system, rather for appearance, balance and to allow a longer cocking arm. So noise level is about average for a spring/piston air rifle of this power level.

The Air Arms TX200 air rifle is intended to be used only with a scope. No iron sights are fitted.

The gun tested by HAM was supplied as a “Premium Bundle” by Pyramyd Air, complete with a Leapers UTG  3 – 12 x 44AO scope, model SCP3-U312AOIEW. Also included was a Leapers one piece mount as the scope itself is supplied bundled with inappropriate (for this application) Weaver rings.

This scope has the essential mildot reticle and side wheel focusing that’s a requirement for successful Field Target shooting. The windage and elevation turrets adjust precisely and have locking rings to prevent inadvertent changes. At $120, this is not an expensive scope, but it works well and the 12x magnification capability matches the maximum allowed by Field Target competition rules. 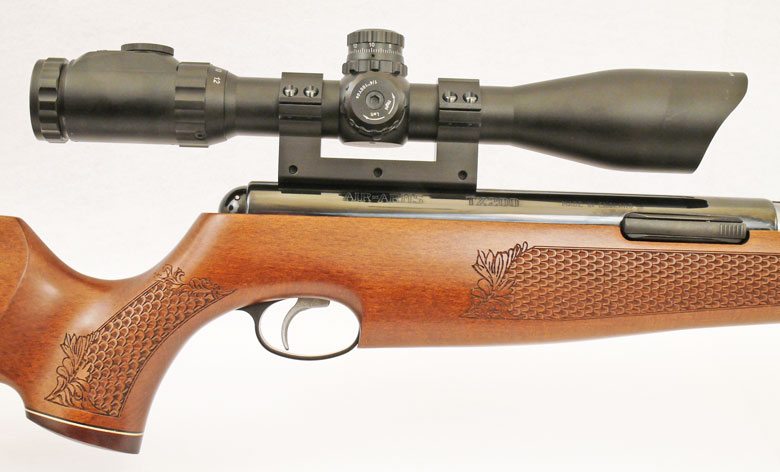 The Leapers one piece mount holds the scope solidly in place. It does, however, highlight the very “thin” nature of the dovetails machined into the compression tube of the Air Arms TX200 air rifle. This may be very satisfactory for high end scope mounts, but the Leapers mount grips are a little broad in this fitting and required some care to install. Once in place, however, there were no issues in use.

The great trigger is one element in making the Air Arms TX200 air rifle easy to shoot for a spring/piston air rifle of this power.

Other factors are the ideal point of balance, in a natural location for the forward hand, and the design of the stock, giving the easy, positive cheek weld that’s essential for consistent accuracy.

HAM tester Paul also highlighted the very smooth, solid shot cycle as a big shootability benefit. This is an air rifle that will repay careful use of the “Artillery Hold” by the shooter when taking freehand shots.

At a “competition weight” of around 11 Lbs, the TX200 is not a light air rifle and this can tend to wear down the shooter in an extended shooting session. Conversely, this weight can be a plus sometimes when shooting freehand as it tends to steady the gun. The weight also soaks up the recoil, keeping this to a fairly comfortable level.

The RateAGun Score is low (that’s good) for a spring/piston air rifle of this power level at 8.2 – another indication of the capability of this gun so long as the shooter can do his part!

The TX200 is simply a beautiful air rifle.

HAM tester Paul Manktelow’s comments were “Fantastic woodwork and the most perfect metal finishing of any airgun I’ve seen”.

The right handed beech stock has a gorgeous “fishscale like” pattern carved into its forend and wrist. There’s an excellent rubber buttpad and a beautiful dark hardwood grip cap on the underside of the stock. 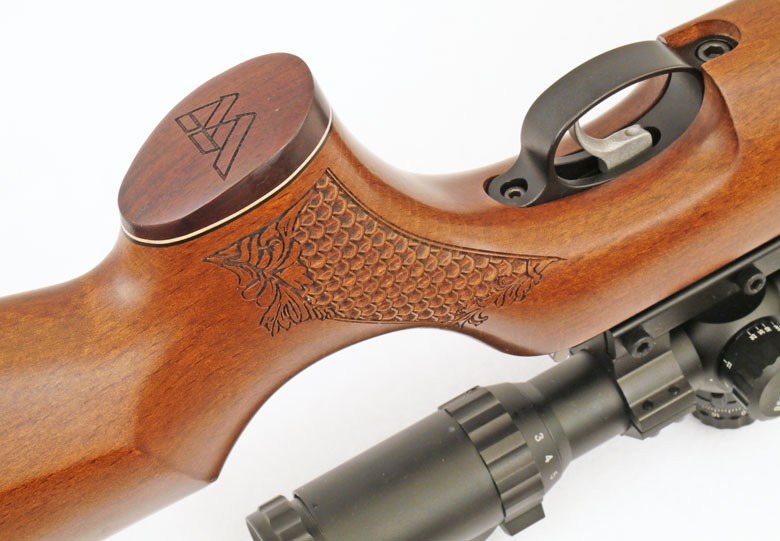 Metal parts are blued an polished to a glossy finish that’s more black than blue. It’s easy to see yourself reflected in the compression chamber!

Almost all TX200 air rifles will be purchased from online dealers, you’re not likely to find this gun in a retail store near home. But this is not an issue as the Air Arms TX200 air rifle is available from many reputable, quality online airgun specialists.

The instruction manual supplied in the US is unfortunately brief and contains clear indications of being modified from the British original. (It refers to the UK 12 Ft/Lb muzzle energy Legal Limit, for example). It also incorrectly states that the warranty is for one year only (that was true until the end of 2014). Air Venturi tells HAM that they will be making the appropriate changes in future.

One thing to watch for is the rear stock screw (the one holding the front of the trigger guard). This screw has a tendency to loosen with use – this could possibly affect accuracy. This screw loosened somewhat on the Air Arms TX200 air rifle tested by HAM. Although this screw should not be very tight and the issue could be fixed simply by a lock washer, it’s clearly an issue that Air Arms could address for future production. 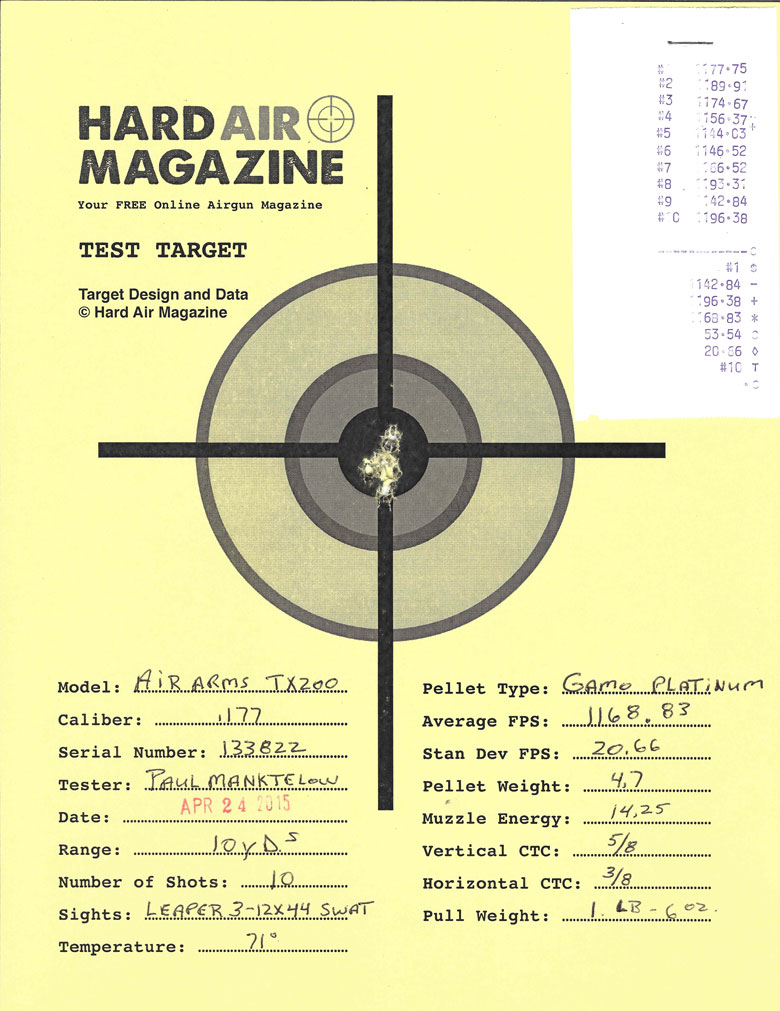 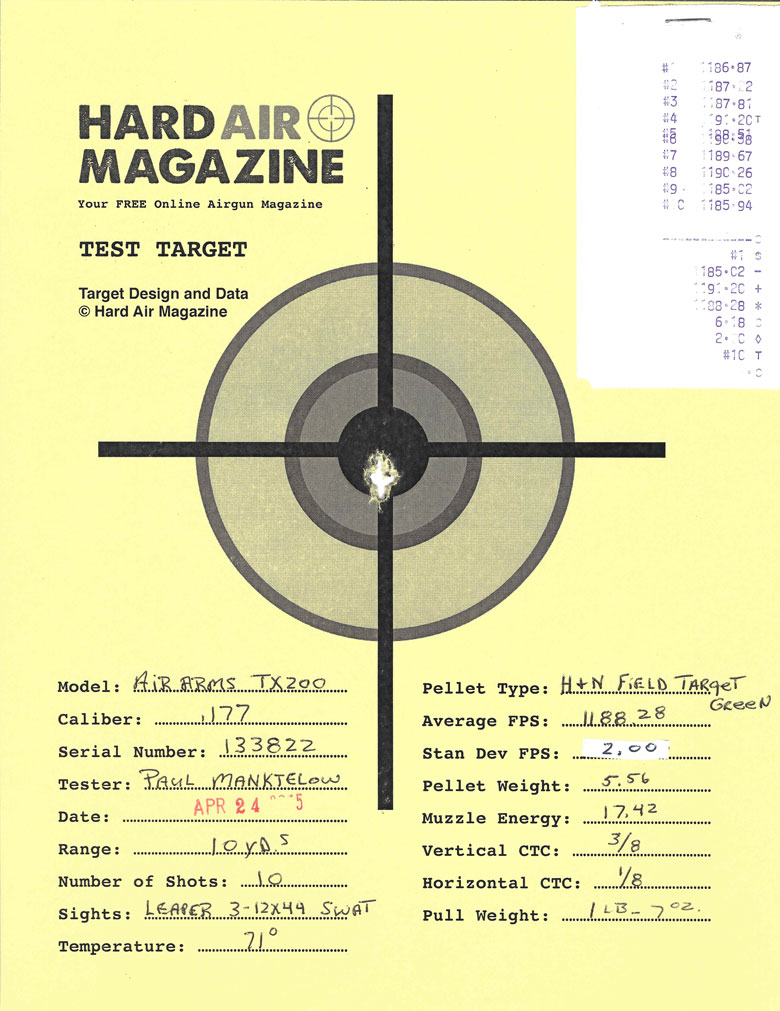 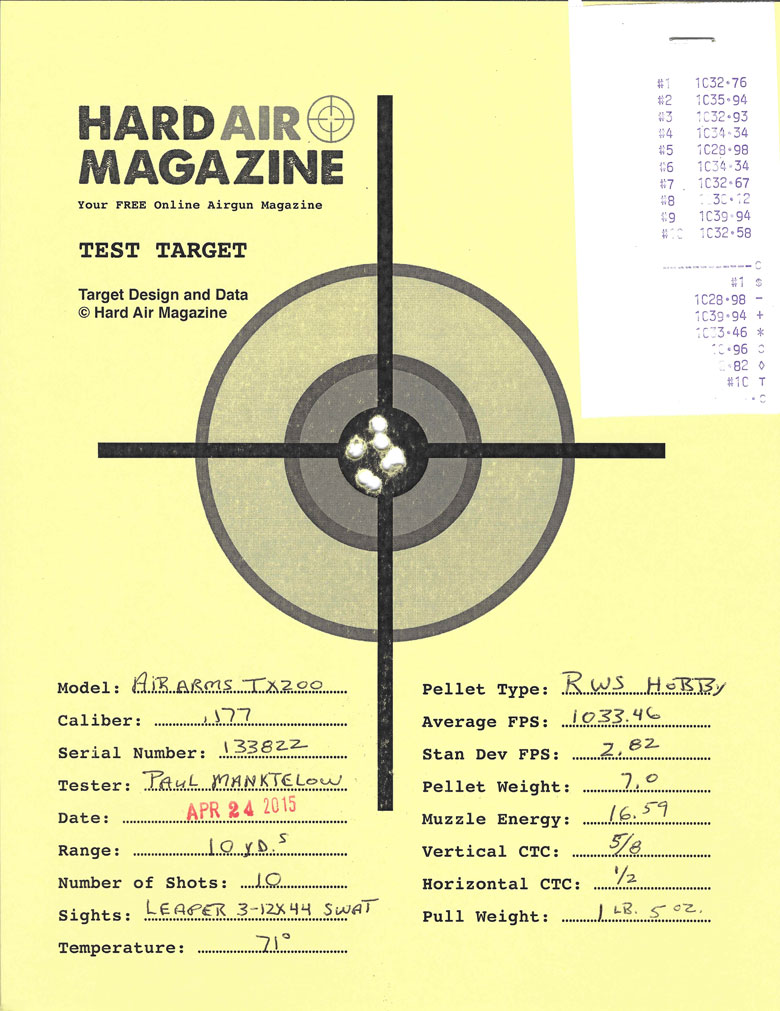 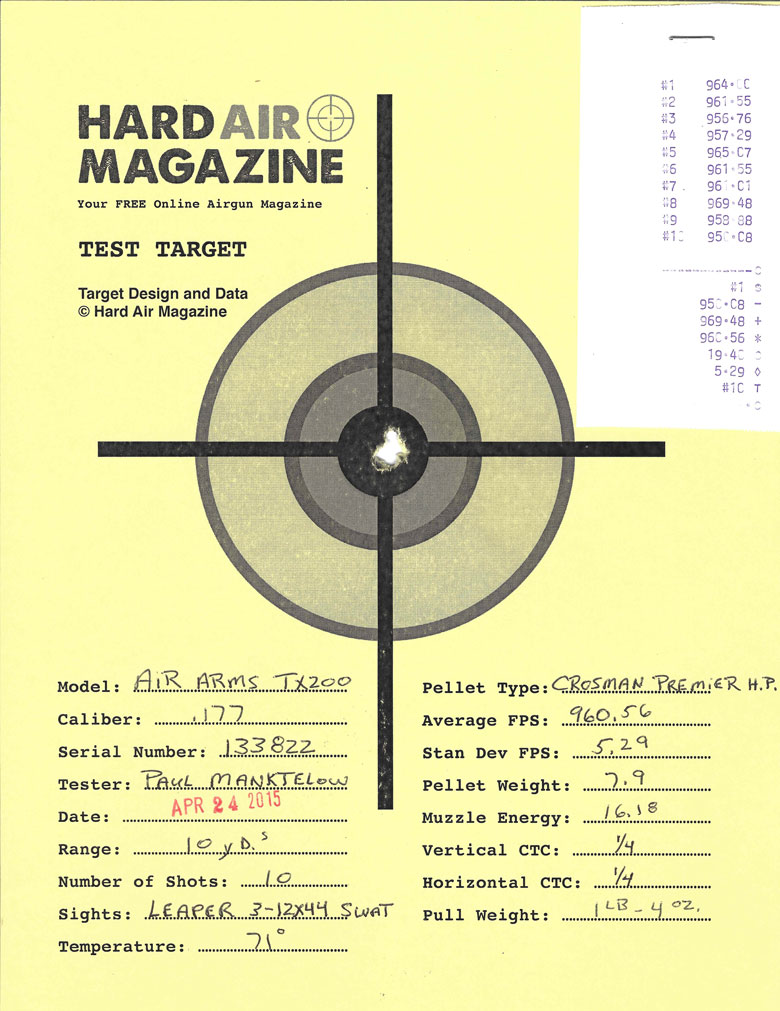 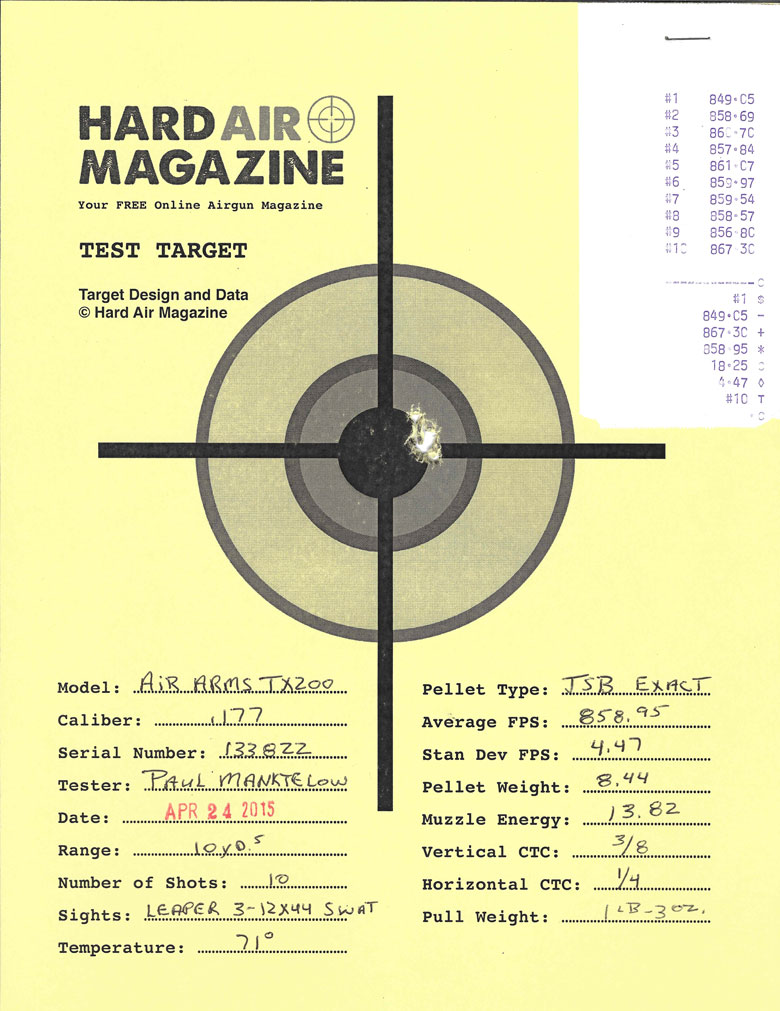 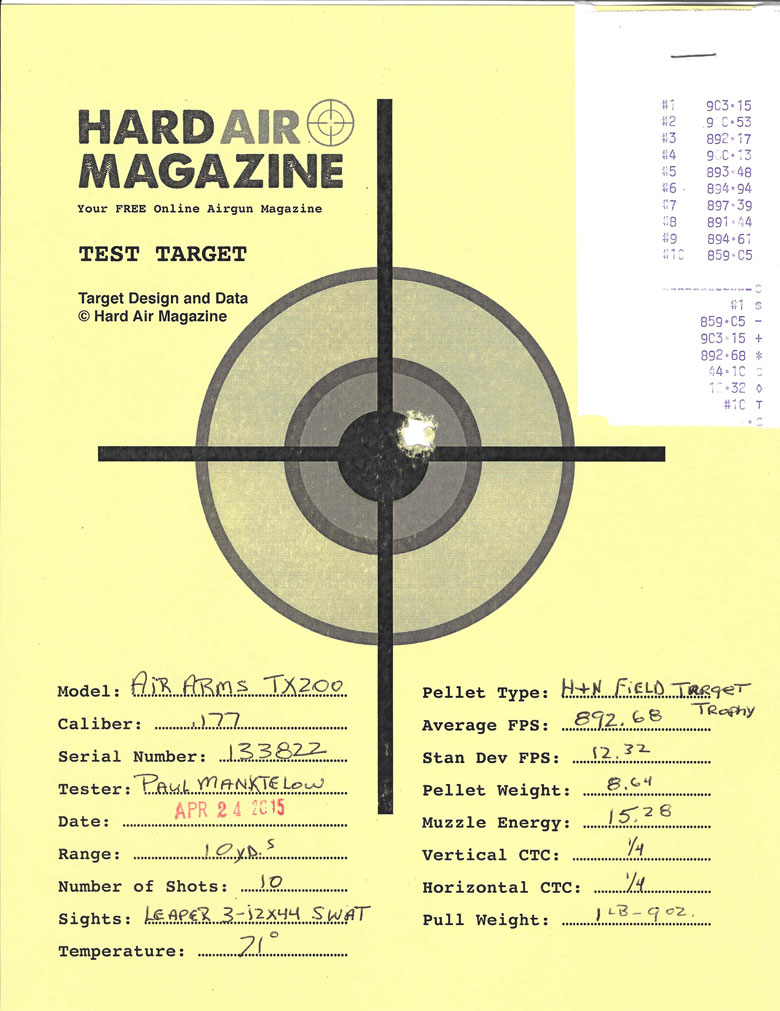 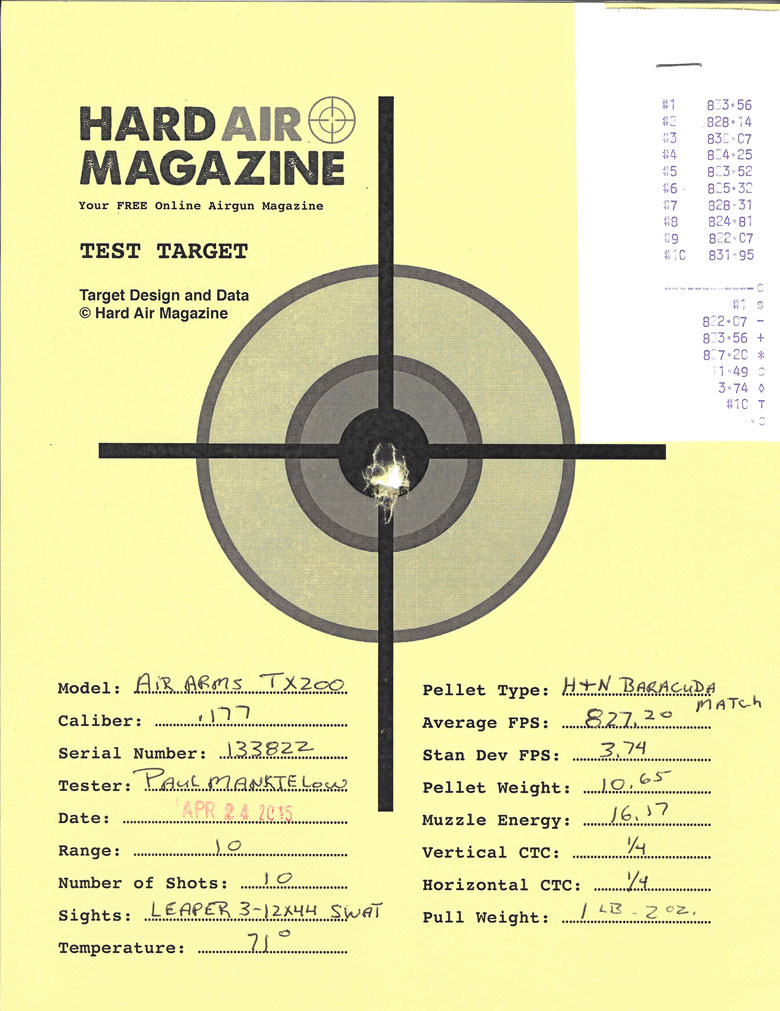