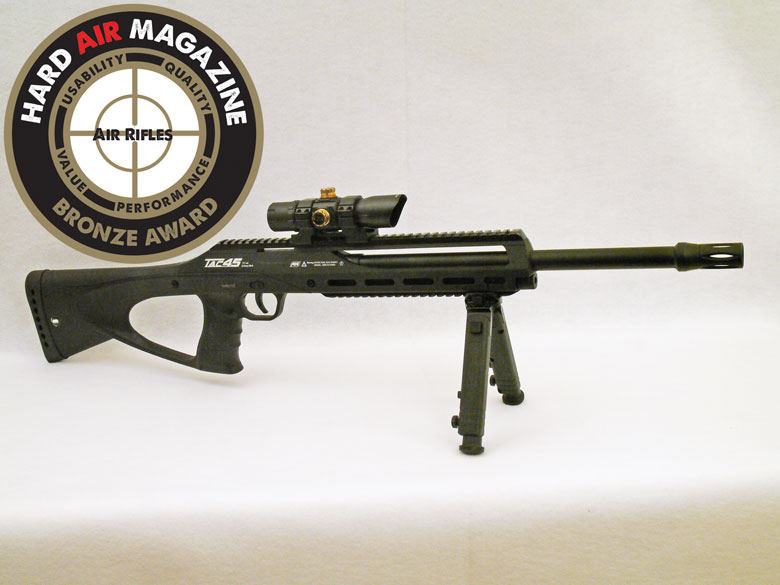 HUGE shot count.
Very quiet.
Probably the most economical CO2 airgun ever made.

If you're looking for a quiet BB plinker that can be enjoyed by the whole family and is very economical to shoot, the ASG TAC 4.5 BB Rifle is a great choice.

Accuracy is "minute of soda can" good at up to 10 yards and the huge number of shots available from one CO2 cartridge - 390 in HAM's tests - is simply unbelievable. It's unmatched by any other CO2-powered gun the HAM team can think of.

Be clear. This is not a powerful airgun. It's not for hunting or precision shooting. But for its intended use - plinking - the ASG TAC 4.5 BB rifle can give many hours of fun at an unbelievably low running cost.

For its combination of quality, usability, value and performance, the ASG TAC 4.5 BB rifle receives a HAM Silver Award.

63%
HAM Rating
You have rated this
Full Review

The ASG TAC 4.5 BB Rifle is a very unusual airgun. As a long gun that fires BBs only – with no option of pellets – it’s almost unique in the market at the time of writing this review. Almost all other long airguns firing BBs also have the option to shoot pellets. That makes it difficult for us to rate against the other air rifles tested by HAM.

HAM is calling the TAC 4.5 a rifle as it’s a long gun and most people call long guns rifles. But of course, this is completely incorrect as BB guns all have smoothbore – not rifles – barrels and are thus, by definition not rifles. Anyhow, we’ll call the ASG TAC 4.5 a BB rifle…

The ASG TAC 4.5 BB Rifle sells for $100 at the time of writing. This price includes the removable front and rear fiber optic sights, a bipod and one 21-BB capacity magazine.

As a CO2-powered BB gun, the ASG TAC 4.5 BB Rifle is never going to be a speed demon. Muzzle velocity is low, peaking at 326 fps in HAM testing.

With such a low muzzle velocity, the ASG TAC 4.5 BB Rifle should never be used for hunting any type of critter or bird – however small – as the chances of achieving a humane, one-shot kill will be about zero.

But note that the muzzle velocity recorded by HAM would have been influenced by the relatively low temperature in our test range – 68 degrees F. Like all CO2-powered airguns, the TAC 4.5 will shoot faster in higher ambient temperatures, so you can expect to pick up some additional fps just by shooting it on a hot day.

The low muzzle velocity is not all downside, however. Close range plinking does not require high muzzle velocity and the low fps economizes on CO2 usage. This low CO2 use gives an incredibly high shot count for the ASG TAC 4.5 BB Rifle. It also means that vertical stringing during rapid fire is very much reduced as the gun cools less in firing than would one with higher power.

The low muzzle velocity also reduces the risk of potential damage from ricochets – always a risk when firing BBs. You’ll still need to be careful and wear protective shooting glasses, however, to be safe.

As a BB gun, the ASG TAC 4.5 BB Rifle is not intended to be accurate in the sense that pellet-firing air rifles are. Compared to other BB guns, the accuracy is pretty good, with best accuracy being achieved with ASG’s own Blaster BBs.

HAM tester Doug Wall shot a sub 1-inch CTC (Center To Center) group of 10 ASG Blaster BBs at 6 yards, as you can see from the targets below. At 10 yards, the group opened up as expected, but accuracy was still “minute of soda can” good at that range. This is good accuracy for a BB gun and is fine for its intended use as a close range plinker.

This means that there’s zero cocking effort. Once the gun has a 12 Gram CO2 cartridge installed and the magazine snapped into place (loaded with BBs, of course), the TAC 4.5 fires when the trigger is pulled with the safety off. This lack of cocking effort makes the ASG TAC 4.5 BB Rifle ideal for those who don’t like to manipulate a bolt or pump up a multi-pump action.

The downside is that the same double action semi-automatic mechanism causes a long, heavy trigger pull. 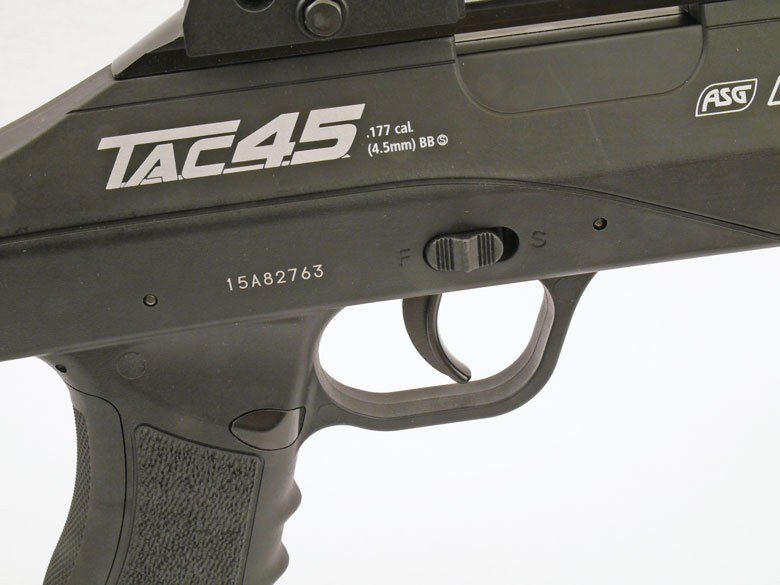 Actually, the trigger pull weight is not that heavy, in the ASG TAC 4.5 BB Rifle tested by HAM, it averaged just under 5 lbs. But it is a very long pull.  This long pull is made less intrusive by the presence of a clear “second stage” effect, so that the trigger can be pulled up to that stage and then just a little more to make the shot.

The first is easy – they claim the magazine holds 21 BBs. It does.

The ASG TAC 4.5 BB Rifle tested by HAM fell way short of the manufacturer’s muzzle energy claim, however. ASG claims 2.8 Joules of muzzle energy – that’s 2.06 Ft/Lbs. The best HAM could achieve was 1.28 Ft/Lbs at 66 degrees F. That’s disappointing, but not a knockout blow for a plinker. And it would be a little higher in warmer temperatures.

Muzzle energy is low because muzzle velocity is low. ASG claims a maximum of 417 fps for the TAC 4.5. The best HAM acheived was 326 fps using Daisy Avanti Precision Ground Shot.

Surprisingly, the manufacturer makes no claims for the shot count the ASG TAC 4.5 BB Rifle can achieve from one 12 gram CO2 cartridge. They should do because the TAC 4.5’s shot count is incredibly high.

In HAM’s tests, the ASG TAC 4.5 BB Rifle achieved no less than 325 shots above 250 fps and continued on to a total of 390 shots before the gas finally ran out.

Yes, you read that right. 390 shots on one 12 gram CO2 cartridge! We can hardly believe it, but it’s true. ASG should certainly be claiming 300+ shots per cartridge for the TAC 4.5 and then exceeding this outstanding specification.

Consistency was a strong suit for the ASG TAC 4.5 BB Rifle tested by HAM.

Muzzle velocity varied little with different pellets. More impressive was the way that muzzle velocity held up with enormous consistency over so many shots. We don’t usually publish our HAM test notes, but this time we’re making an exception.

Here’s HAM tester Doug Wall’s shot count notes. As you can see, the ASG TAC 4.5 BB Rifle went way beyond our expectations until shot 290 was recorded at 105 fps. Almost unbelievable, but true! 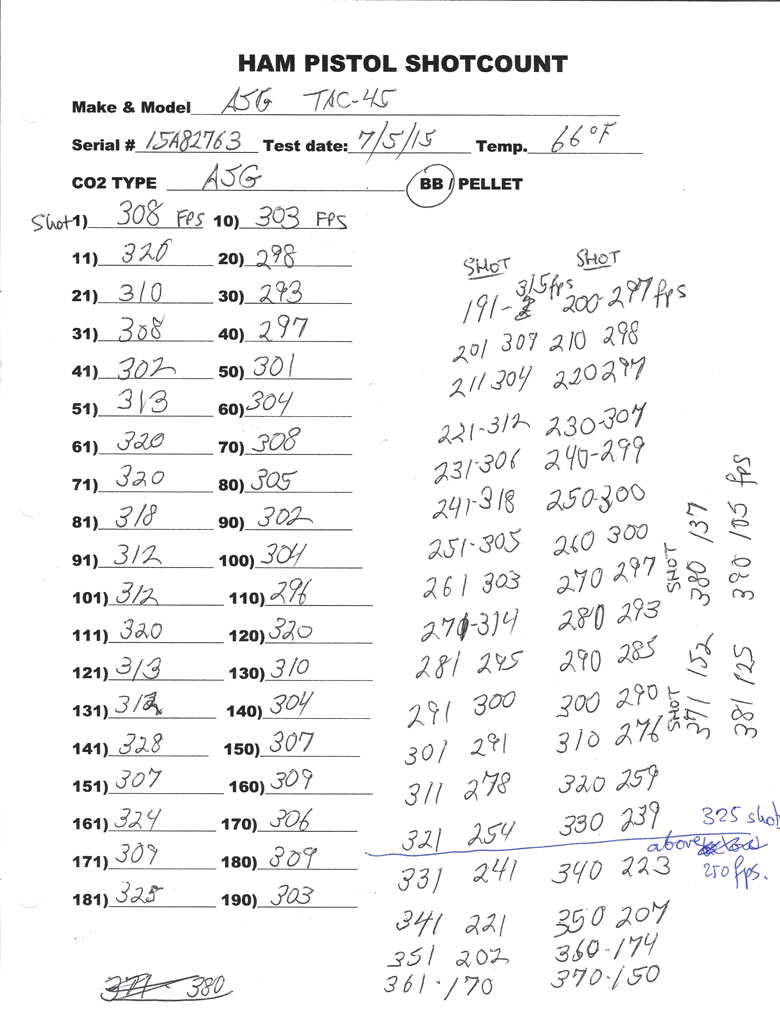 Trigger pull weight was also pretty consistent around its 4 lb 15 oz average, varying by a maximum of only 5 ounces from the average figure.

Accuracy was reasonably consistent at 6 yards for a BB gun, with ASG Blaster and Umarex Steel BBs giving slightly smaller groups than the other standard HAM test BBs.

Thanks to its low power level, the ASG TAC 4.5 BB Rifle is extremely quiet. This makes it very backyard-friendly.

Although there’s no silencer as such, the ASG TAC 4.5 BB Rifle does have a shroud that projects beyond the actual “soda straw” barrel and surrounds it. Subjectively, it seems that this shroud does reduce the sound level. It seems to make the report a duller, less-intrusive the higher pitch than is the case with the shroud removed. 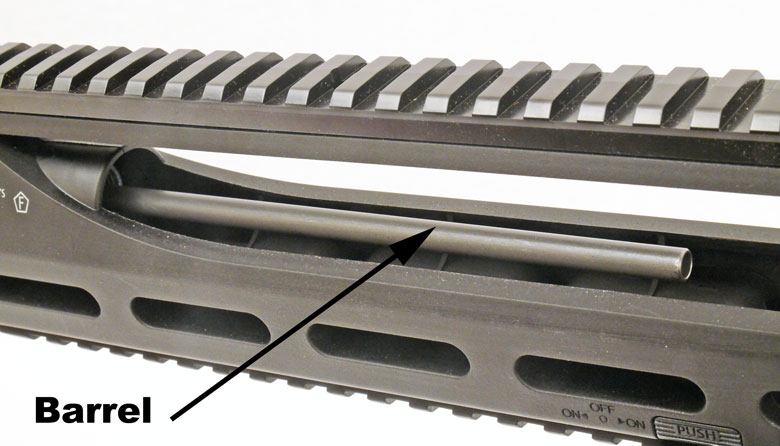 The ASG TAC 4.5 BB Rifle is supplied with front and rear open sights that clamp onto the long top Weaver/Picatinny rail. The front sight has a bright orange fiber optic element, while the aperture rear sight is adjustable for elevation and windage. 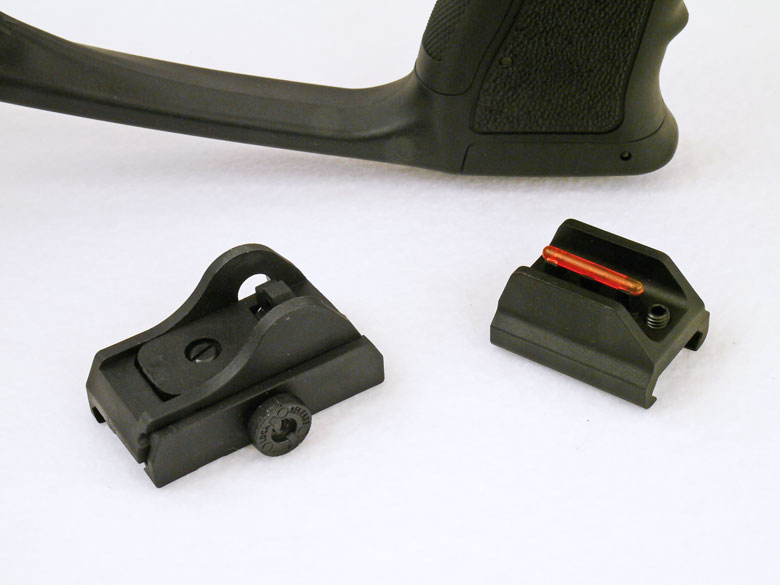 The open sights are fine for “minute of soda can” plinking. They can be removed and replaced by a red dot sight if required.

Alternatively, a dedicated ASG laser can be mounted in the front of the stock, under the barrel, and used for sighting. 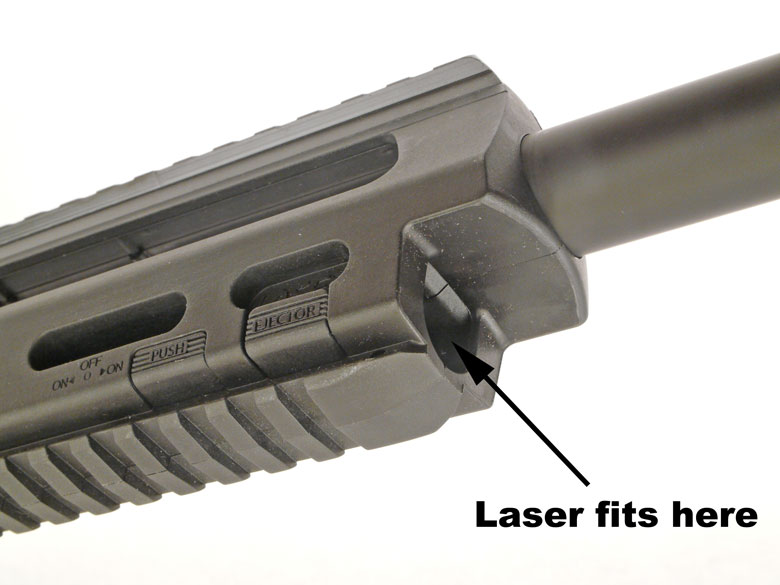 At typical BB shooting ranges and accuracy, there’s no reason to fit a scope to the TAC 4.5, although the full length accessory rails would make that easy to do.

Shootability of the ASG TAC 4.5 BB Rifle is good.

In spite of the long pull, the ASG TAC 4.5 BB Rifle can still be fired very rapidly – faster than one shot a second – and this brings a smile to every face. The long pull meant that Stephen Archer was unable to successfully use the “double tap” technique, however.

The safety is positive and effective, while BB loading is easy and convenient. The BB magazine is easily released from its location in the stock’s pistol grip using the release button. The BB follower slides easily into its locked open position, allowing BBs to be fed rapidly into the magazine through the side loading port. 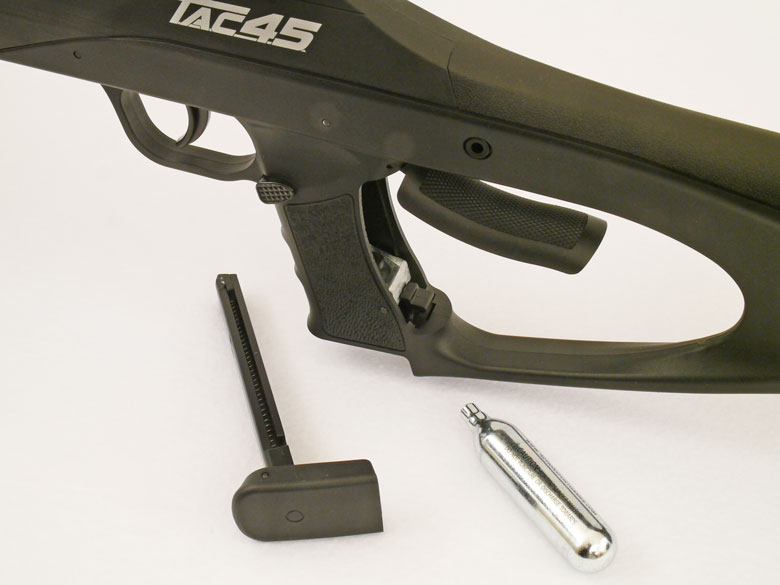 The CO2 cartridge is simply loaded into the rear of the pistol grip through its own door. It’s pierced by turning a winged screw in the base of the pistol grip. No separate Allen wrench is required, as is the case with many BB pistols.

Locking the included bipod onto the lower Weaver/Picatinny rail gives a sturdy rest for the gun. The bipod can be adjusted for height. It also folds back under the stock if required. You can probably argue that the provision of a bipod on a BB gun is overkill, but it’s a nice feature and makes sniper fantasies that much easier to indulge.

Although obviously a “black rifle’, the ASG TAC 4.5 BB Rifle is not based on the design of any military weapon.

The size and weight make the TAC 4.5 easy to shoulder and the thumbhole stock design gives an excellent cheek weld when using the open sights or an attached red dot sight.

Pull length is compact at 14-inches. Combined with the reasonable weight, this makes the TAC 4.5 a BB gun that can be used by all the family.

Black synthetic parts form the entire exterior of the ASG TAC 4.5 BB Rifle. Quality of molding is very good, with a minimum of seam lines visible and a range of surface finishes appropriate to use.

The ASG TAC 4.5 BB Rifle is fairly readily available online, although not so easy to find yet in physical stores.

ASG provides a 9 month limited warranty on the TAC 4.5 and, although there are not really any user-replacable parts, they also include a complete, detailed schematic online at http://www.actionsportgames.com/files/asg/products/exploded-drawings/18102_Exploded.pdf

Additional magazines are available at retail. This is probably – along with BBs and CO2 cartridges, of course – the only additional item most users will require.

As with any CO2-powered airgun, HAM would apply a drop of Crosman Pellgun Oil to the flat end of the CO2 cartridge every 500 to 1,000 shots. This will keep the gun’s seals in good shape, but don’t overdo it, or you risk gumming up the works.

A basic, but useful and clearly-illustrated instruction manual is provided with the ASG TAC 4.5 BB Rifle. It covers English, French and Spanish languages. 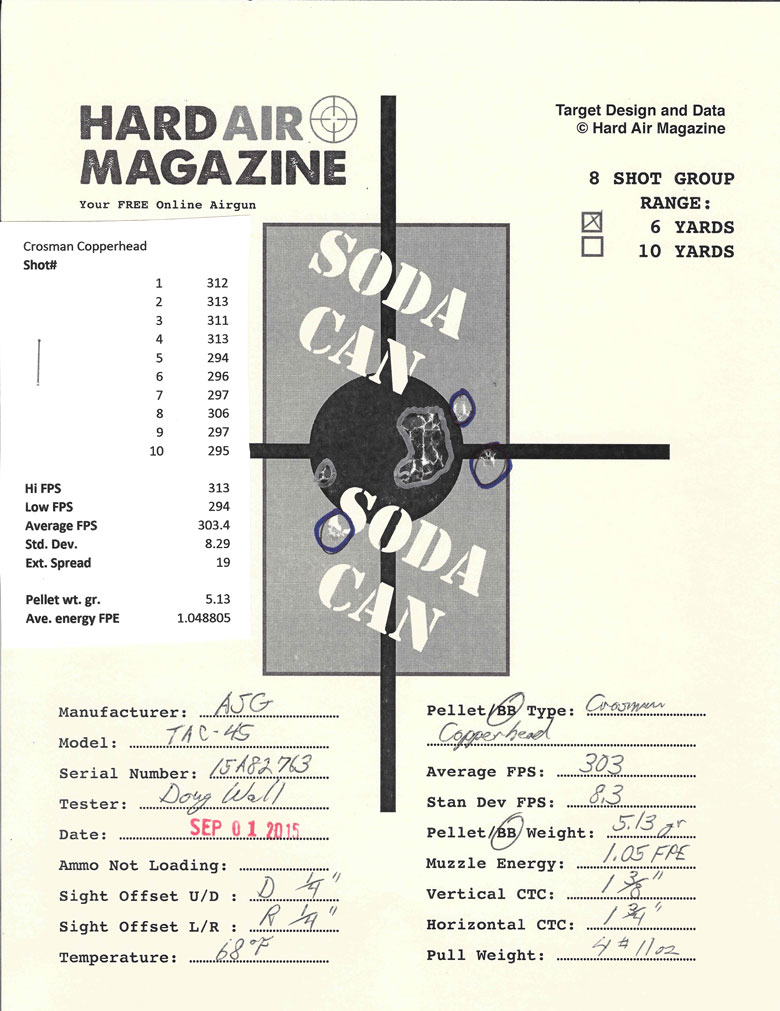 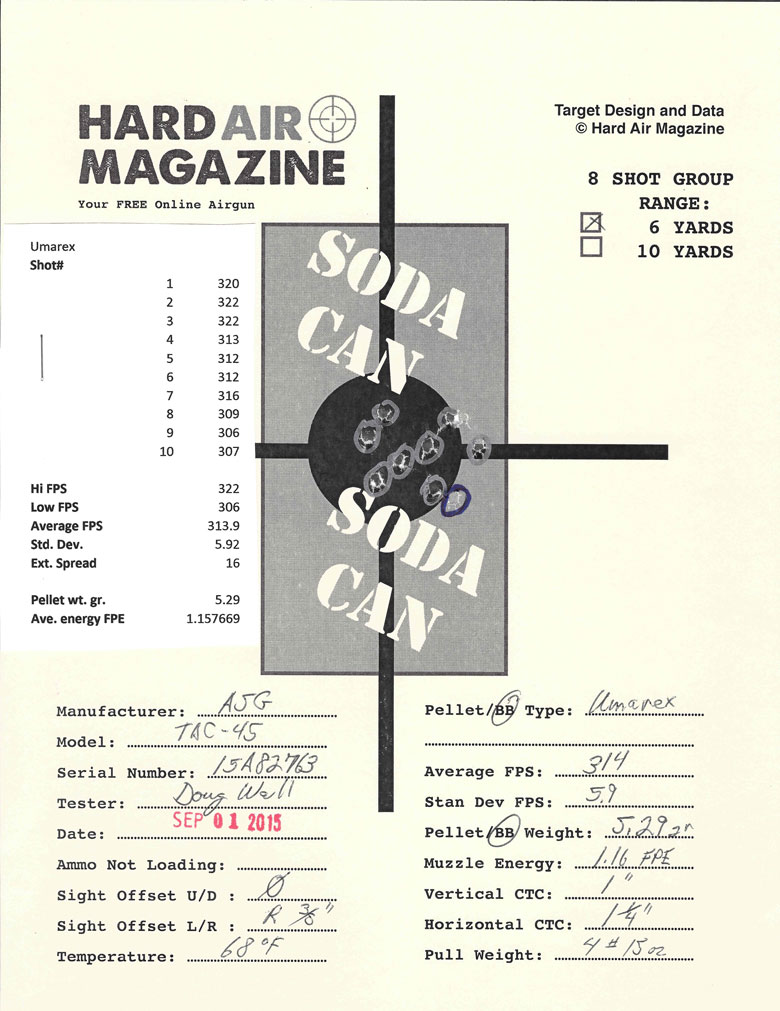 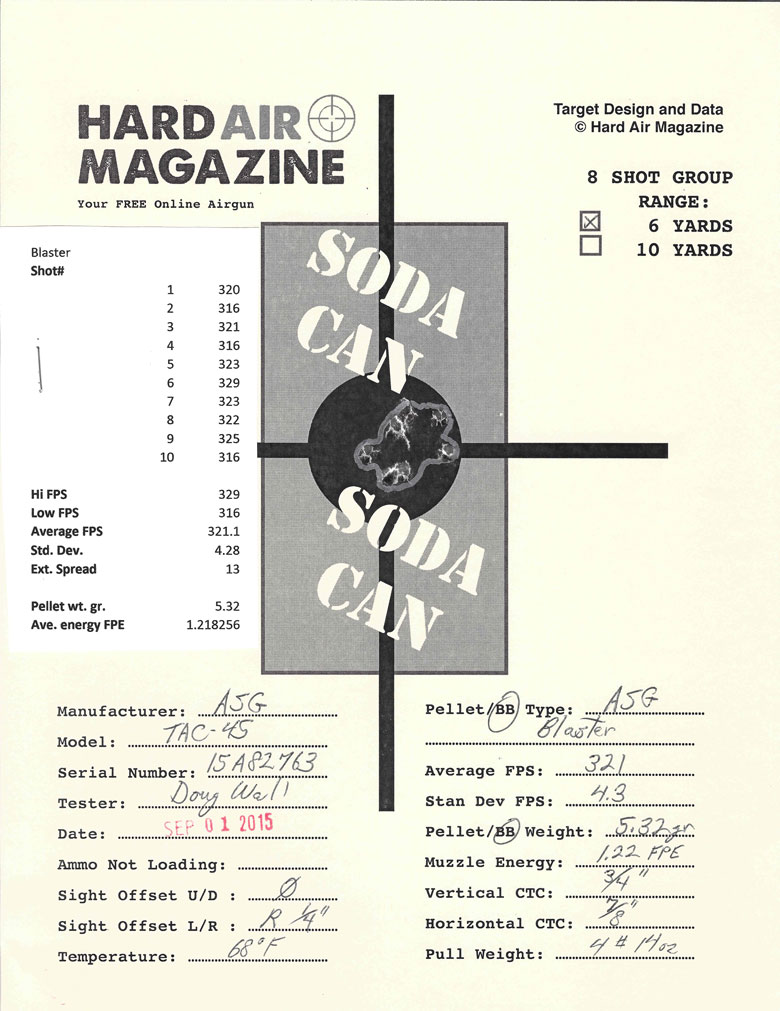 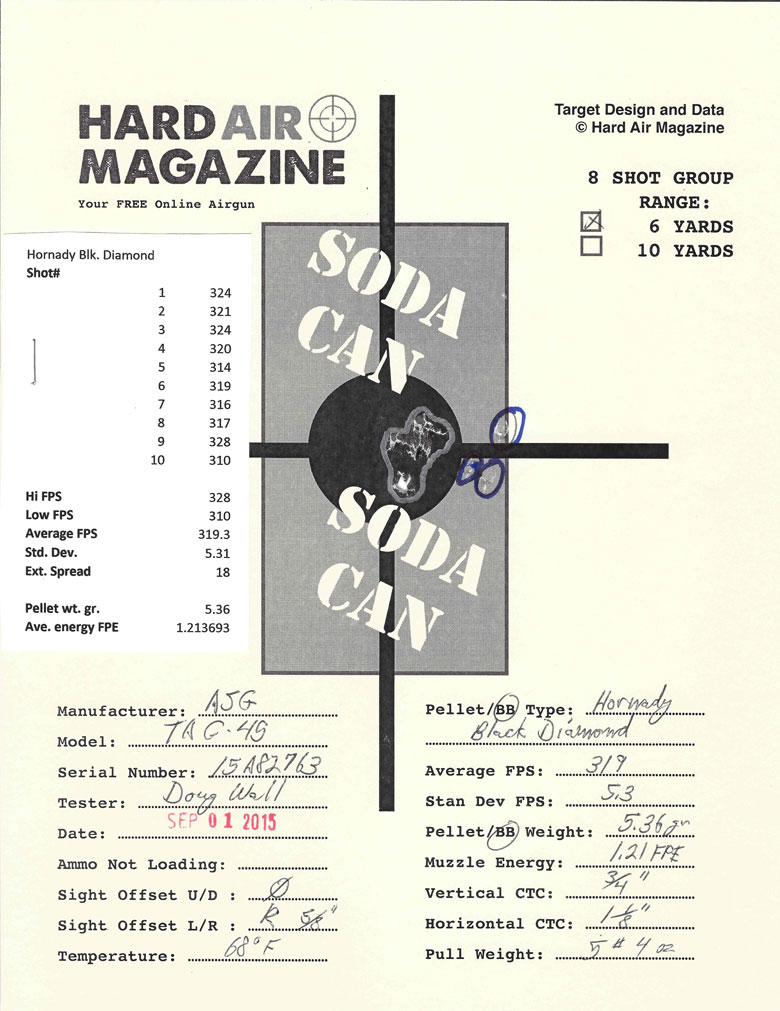 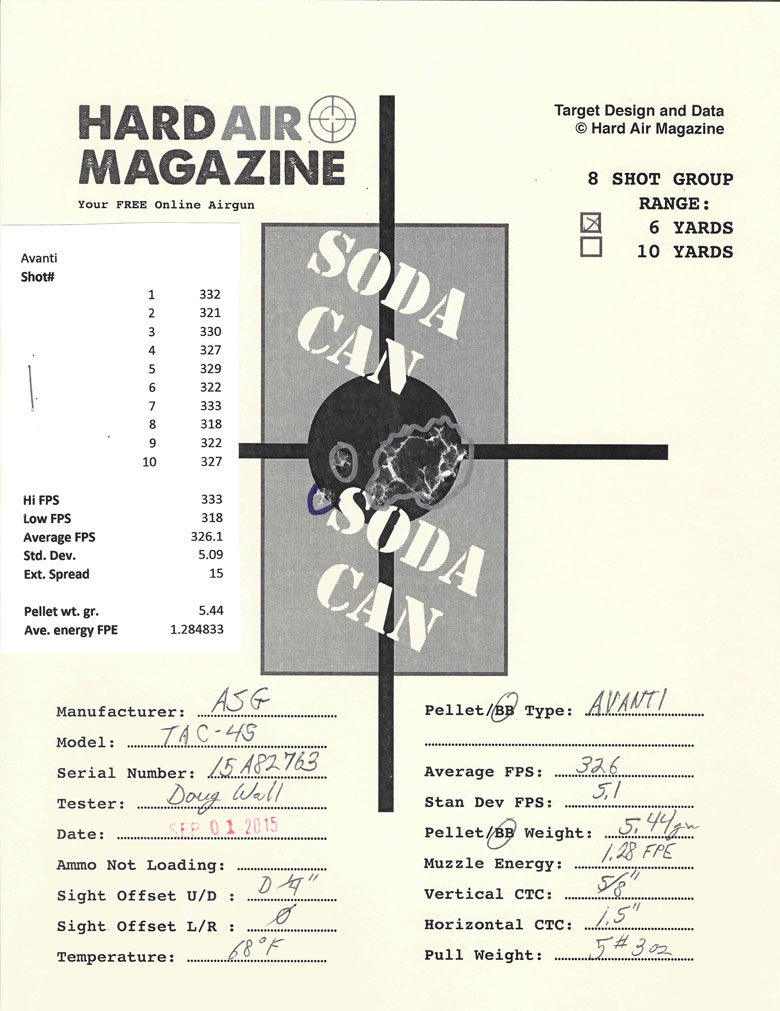 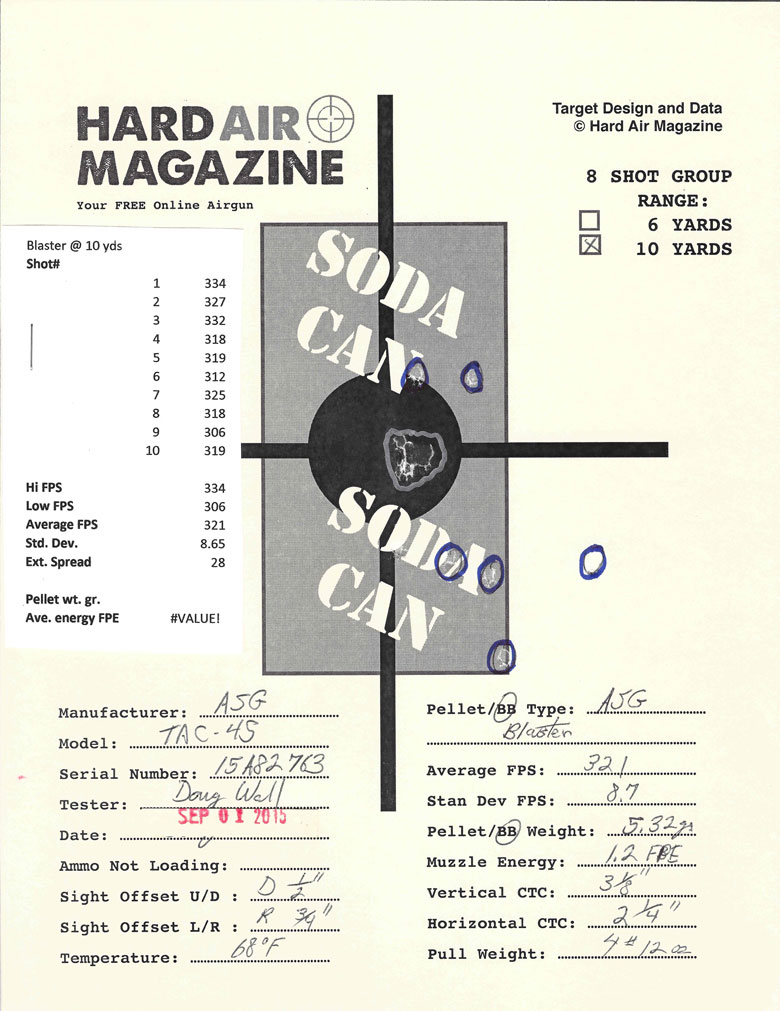