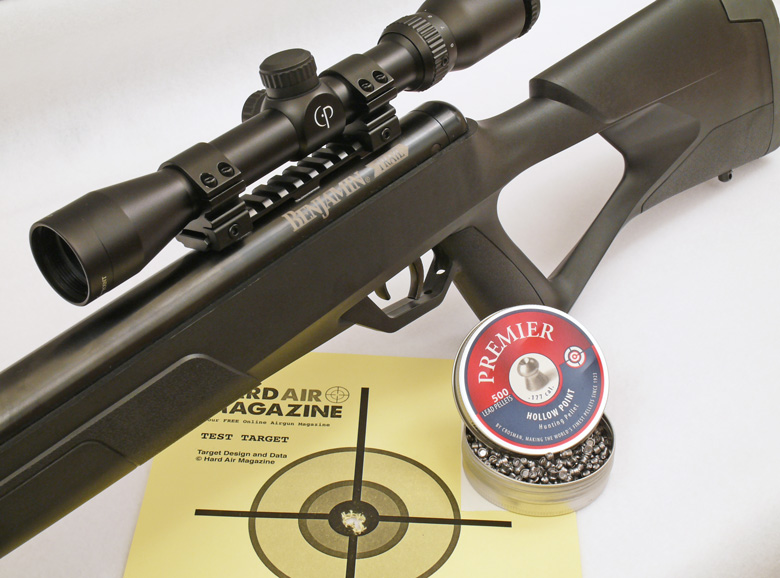 Feels hard to cock.
Harsh shot cycle.
Bundled scope not a good match for the gun.

The Benjamin Trail NP2 air rifle offers a lot of bang for the buck with strong muzzle velocity, a good warranty and good accuracy with many types of pellet.

It's also the current "latest and greatest" being the first model to ship with Crosman's much-touted Nitro Piston 2 technology. And the fact that this airgun is designed and built in the USA counts for a lot with many customers.

This is a powerful hunting rifle that requires skill and some strength to shoot well, as is indicated by the high 10.0 RateAGun score. It's not for beginners but experienced airgun shooters will certainly want to consider it seriously!

68%
HAM Rating
You have rated this
Full Review

As you would expect, Crosman obviously has positioned the Trail NP2 carefully in the marketplace. At a Street Price of $250, the Benjamin Trail NP2 air rifle carries a premium of $30 above the equivalent “first generation” Trail NP models. It’s also bracketed by other air rifles with similar specs from the usual suspects, Gamo, Umarex, Hatsan, and others within +/- $20 of that price.

This makes the Trail NP2 good value for money, although users may find that they would prefer to buy an additional, better, scope to maximize the potential of this airgun. Again, this is a common issue with scopes bundled with air rifles in this price range.

While that should not be too much of a surprise as Crosman manufactures both products, HAM tester Paul Manktelow also shot good groups with the H&N Field Target Trophy Green alloy pellets and the H&N Baracuda Match heavies – an interesting combination!

None of HAM’s standard test pellets shot really badly in the Trail NP2, although surprisingly the JSB Exact pellets, which are normally so accurate, obviously didn’t behave in their normal stellar fashion here.

As you can see from the test targets, the pellets that the Benjamin Trail NP2 air rifle liked least tended to display vertical stringing on the target, while the Hobbys – most unusually – broke into two subgroups.

The tested muzzle energy was reasonably steady at over 19 Ft/Lbs with pellets weighing between 5.56 Grains and 8.64 Grains (except for the JSBs). Muzzle energy, or “knock down power” only really dropped away with the lightest and heaviest pellets HAM tested.

Trigger pull proved to be fairly stout at an average of 6 lb 5 oz on the Benjamin Trail NP2 air rifle tested by HAM. Tester Paul Manktelow did not find this pull weight affected his shooting and commented that “the trigger is nice, it breaks clean” in his testing notes. But 6lbs+ is still a pretty heavy trigger pull weight…

The big, chunky trigger blade has a good shape and is comfortable for the HAM team’s fingers.

With this sort of performance, the Trail NP2’s cocking effort of 35 Lbs is about what might be expected. As is usual with gas piston air rifles, this effort is more consistent throughout the cocking cycle than for spring/piston system, so it FEELS harder to cock than it actually is.

Below, the chunky, easy to use trigger and safety. 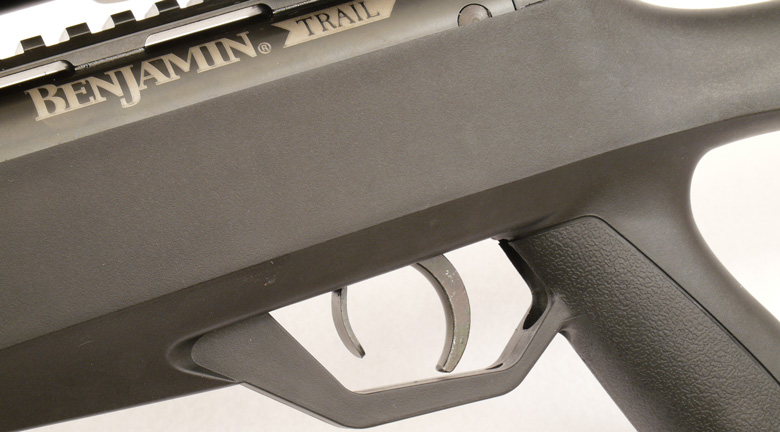 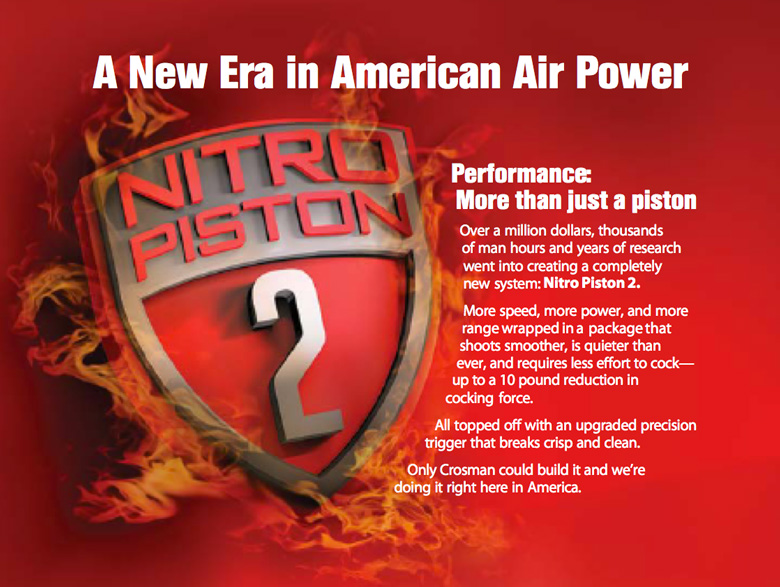 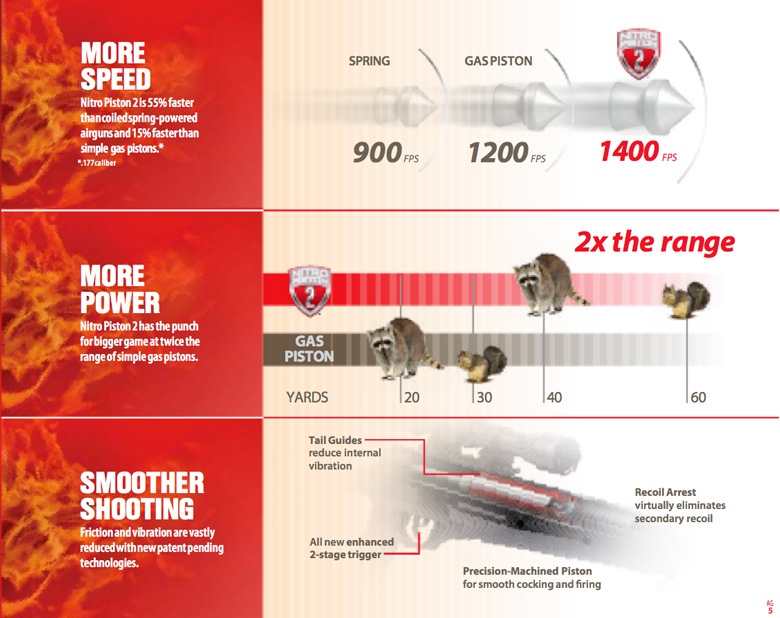 Here’s what we achieved with the gun tested by HAM.

Crosman also claims a maximum muzzle energy of 21 ft/lbs. The maximum achieved by the gun HAM tested was 19.5 ft/lbs. That’s around 7% below the claim.

Another Crosman claim is that the trigger “breaks crisp and clean”. We agree.

And the NP2 is definitely quiet, as claimed.

But the gun tested by HAM didn’t exactly qualify as “smooth shooting” in our opinion, although you could argue that this is subjective.

Overall the Benjamin Trail NP2 air rifle matches some of the manufacturer’s claims. It’s clearly a powerful air rifle, but not quite as powerful as Crosman claims for the example tested by HAM.

With a Standard Deviation of less than 5.5 FPS for all the standard HAM test pellets (except for the Gamo Raptor Platinums), the Trail NP2 gave excellent shot-to-shot consistency in muzzle velocity.

As noted above, the 19+ Ft/Lbs muzzle energy was also consistent across a wide range of pellets. This is good.

And the HAM tests showed pretty consistent accuracy across all the standard pellet types used in HAM tests. So, the Trail NP2 is not “pellet picky”.

One exception to this consistency was the trigger. Although the trigger felt good, it was less consistent that we had hoped, giving a variation in pull weights of 15 ounces between the maximum and minimum values recorded. That’s a much bigger spread than with most air rifles tested by HAM to date.

Yes, the Trail NP2 is quiet. Well, at least so long as you’re not shooting pellets that break the sound barrier.

Very light lead free pellets traveling at over 1100 fps have the potential to produce a sonic boom that will make this air rifle VERY loud – almost to .22 LR firearms level – in spite of the silencer. This would be the case with any other air rifle also, of course, and is caused by the pellets themselves, NOT the gun.

The built-in silencer does a good job of keeping noise levels low and Paul described the shooting sound as just “a very solid thunk” from the shooter’s perspective.

The Benjamin Trail NP2 air rifle has no iron sights. So this is a scope only air rifle. It comes bundled with a Center Point 3-9×32 scope that was used for HAM’s tests.

Scope mounting uses the very solid Weaver/Picatinny system that locks the scope down tight. This type of mount is far superior to traditional airgun scope rails and eliminates the “scope creep” that otherwise plagues some high power air rifles. 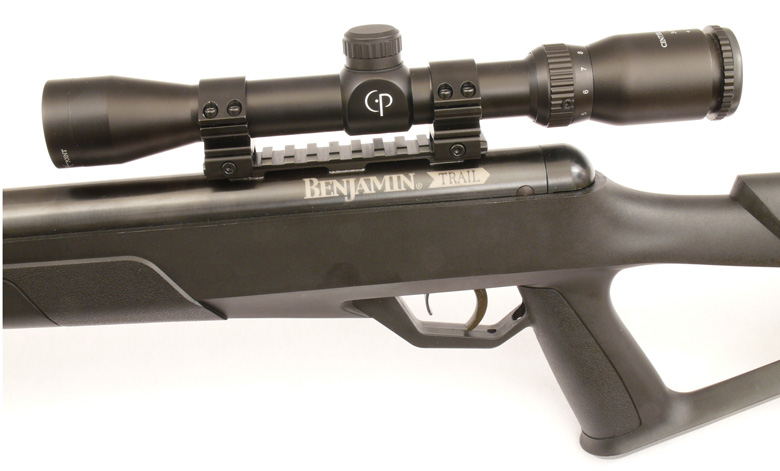 When installing the scope, HAM testers noticed that no friction tape was fitted to the scope rings (as is usual). We expected to find scope movement from shooting as a result. But we were wrong! The scope showed no signs of movement at all throughout the HAM tests: that’s a good thing.

But overall, the bundled scope is the weakest link in the Trail NP2 package. It’s really not up to the job and certainly users should plan to replace it with a more capable scope if they wish to make use of the Trail NP2’s other benefits.

So what’s the problem?

Firstly the scope is not fitted with AO (Adjustable Objective) capability. This means that it can’t be focused to different distances. Although sharpness is good at close ranges of 10 to 20 yards, HAM found that image quality became distinctly fuzzy at ranges beyond that. As Crosman claims that the Trail NP2 has the power for successful hunting at greater ranges than “simple” gas ram models, it’s disappointing that you’ll need to buy another scope to get a sharp image at longer ranges.

And then there’s the mil dots. Yes, this scope does have mil dots, but they’re very small and indistinct in use. And there’s only 3 dots on each side of the reticle. Given the widespread use by airgunners of mil dots for “aiming off”, 3 dots is really not enough to allow for wide changes of range or sidewind.

The stock design gives the Benjamin Trail NP2 air rifle a great cheek weld. This is very important for accurate, consistent shooting and is a key feature for good shootability. The aggressive thumbhole design gives a pistol grip that’s easy to hold and comfortable for the HAM testers’ hands.

There’s a generously sized rubber buttpad that fits well into the shoulder to aid consistency of hold, another important feature for consistent shooting.

The provision of sling swivel studs is another shootability benefit as – if you fit a sling to the Trail NP2 – you can carry it over your shoulder when on hunting expeditions and be fresher when it comes time to take that shot.

And shootability benefits from the light weight of both gun and bundled scope. It points easily and has a convenient, very positive, manual safety located inside the trigger guard, just ahead of the trigger blade.

But, like almost all high power (1000 fps and above) air rifles, the Trail NP2 requires skill and experience from the shooter for accurate results. Use of the loose “Artillery Hold” is mandatory and a tight grasp on the gun can destroy accuracy. Like most manufacturers, Crosman does not explain this in the instructions that accompany the gun.

This need for experience to achieve the best from the Trail NP2 and its harsh firing cycle is reflected in its high RateAGun scope of 10.0

The Benjamin Trail NP2 air rifle is available with a wood stock or Realtree camo finish, as well as the basic black synthetic stock version tested by HAM. Thanks to Crosman for providing a choice of stock finishes!

The design – with it’s aggressive pistol grip style – is polarizing. Some of the HAM team love it, others not. But we were all agreed on the fit and finish of the Trail NP2.

The quality of stock molding is excellent, bluing of metal parts strong and even. Overall, the finish of this gun is flawless. It looks to be well assembled by Crosman’s Bloomfield NY manufacturing facility.

Thanks to Crosman’s wide distribution network, you can find the Trail NP2 almost everywhere that airguns are sold, both online and in physical stores. So, it’s easy to buy.

You can also be happy buying a product that’s made in the USA. And for many of us that’s a big deal!

Crosman Customer Service and backup has a great reputation.There’s a 12-month warranty that does not require you to pay for return shipment – although you do have to pay for shipping to Crosman in the event of a warranty issue.

Crosman normally has spare parts available for most recent models, together with downloadable parts diagrams. But these are not available at the time of writing for the Benjamin Trail NP2 air rifle. HAM expects that this will change with time.

Owner’s manuals are provided for the Trail NP2 in 6 languages, with a separate manual for the scope. 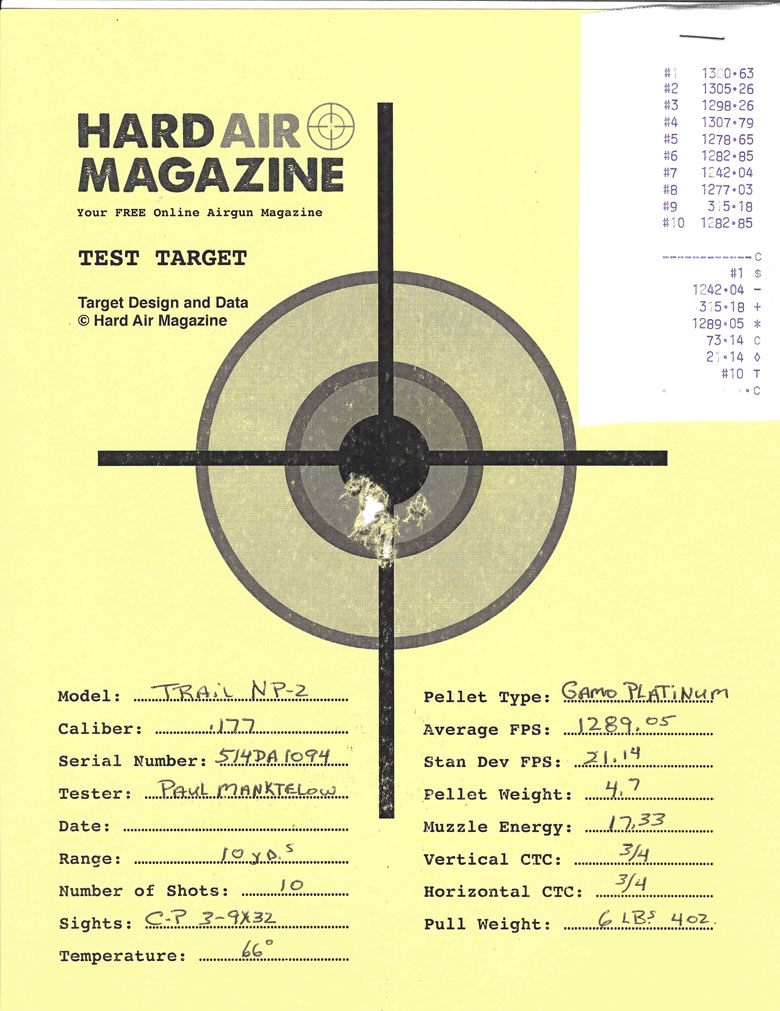 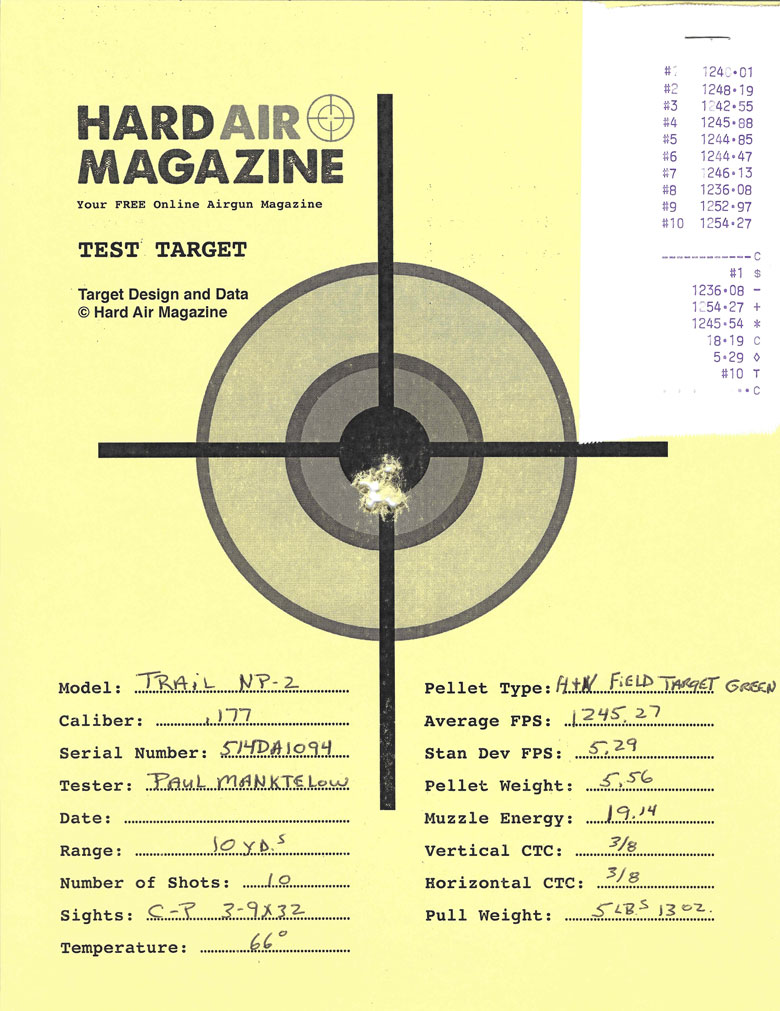 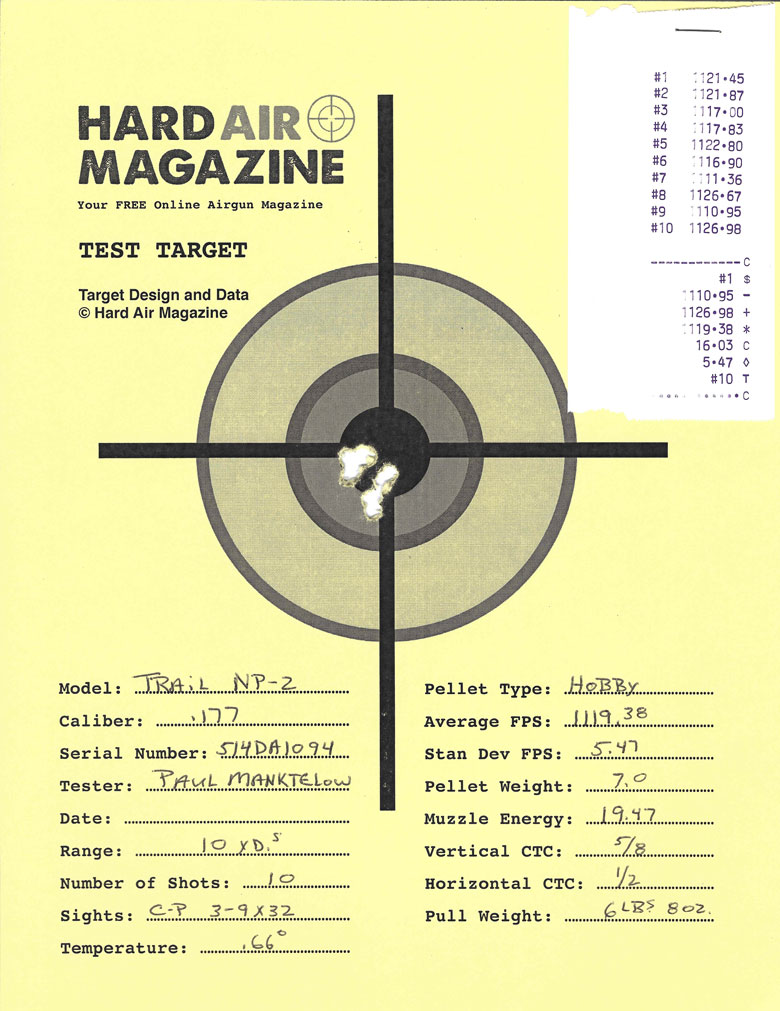 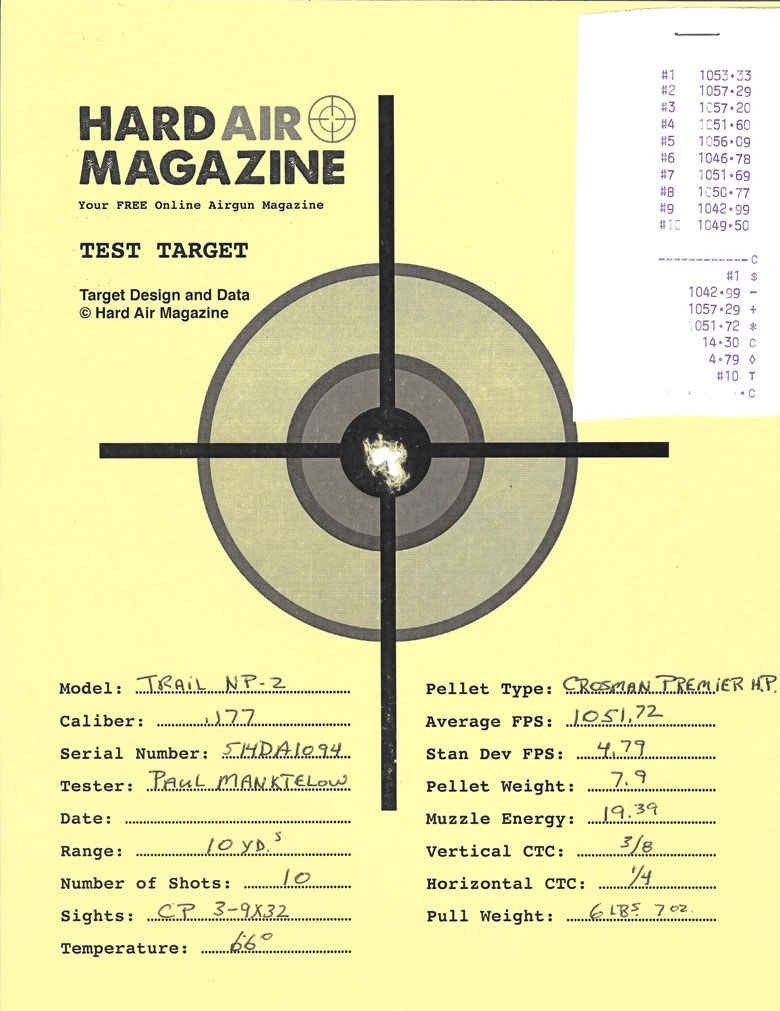 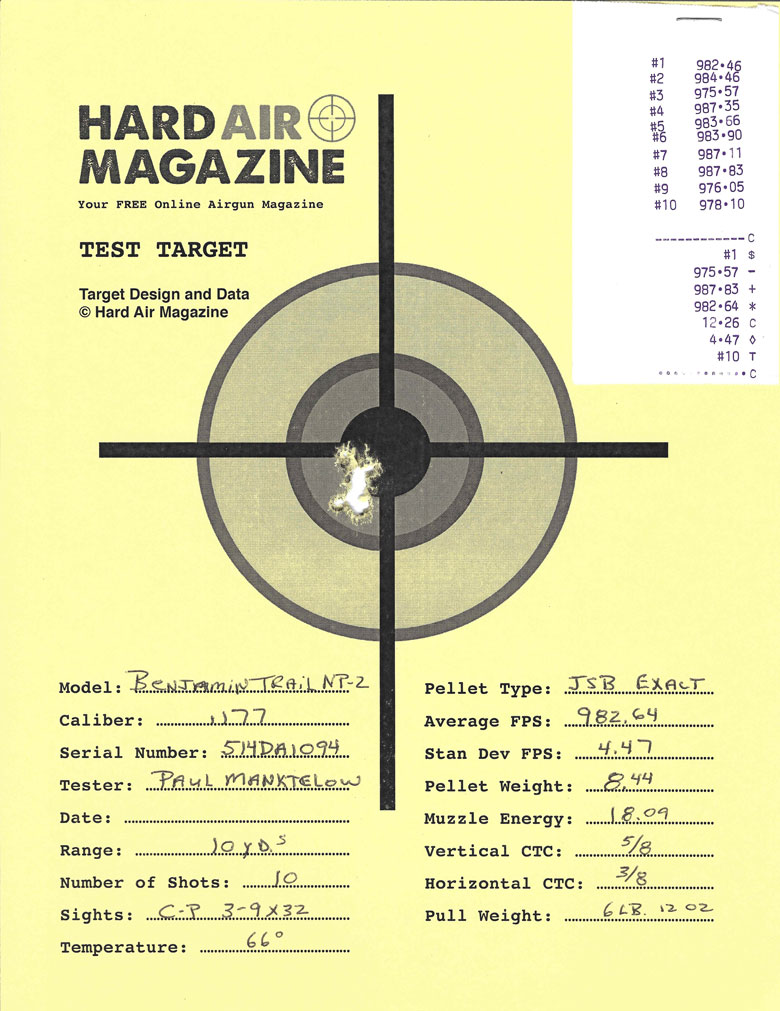 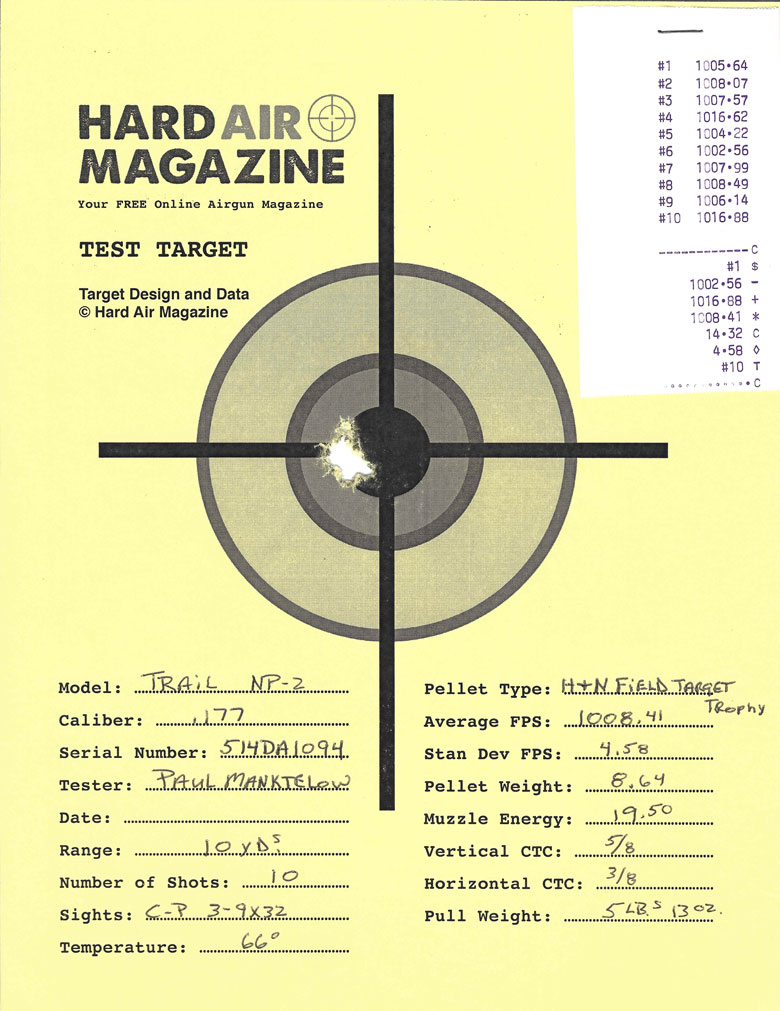 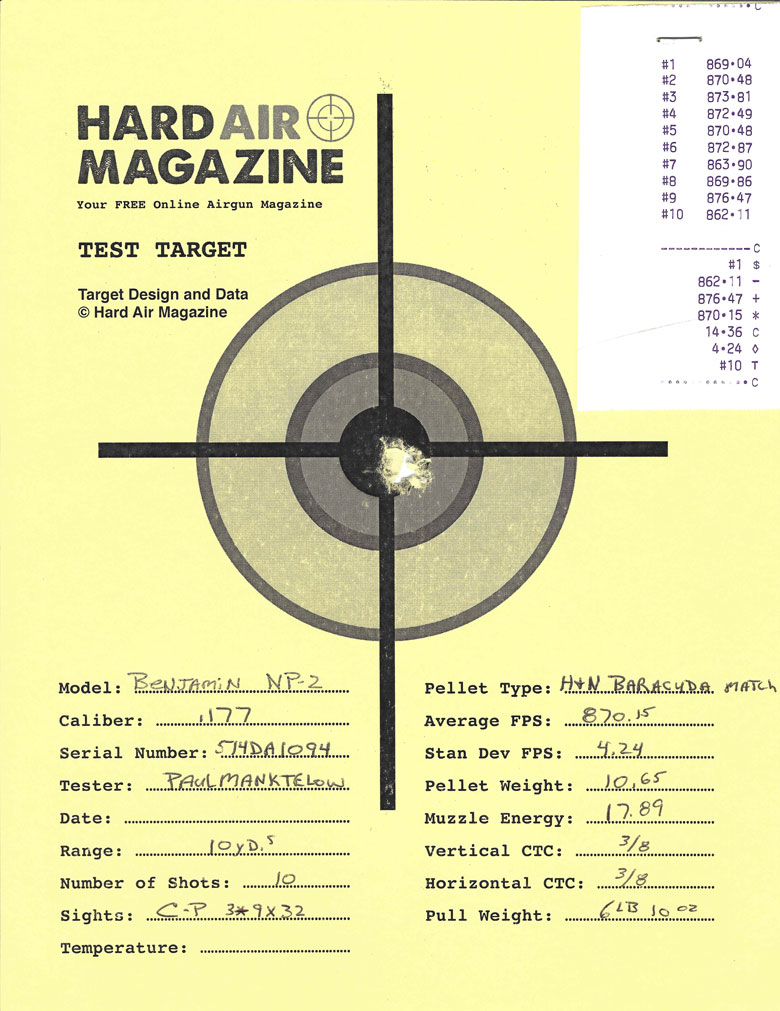