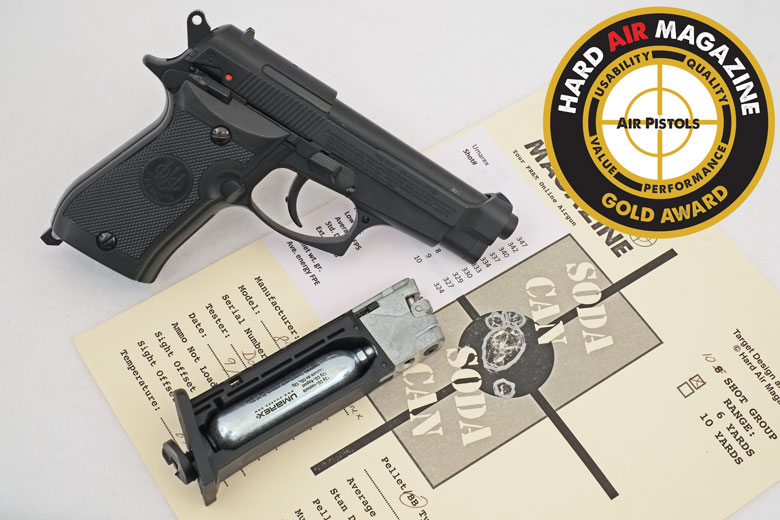 Heavy trigger pull.
Slide travel less than firearm version.
Not much else...

The Beretta Mod 84FS blowback pistol is a great buy at $90 because it does everything well that a blowback CO2 BB replica pistol is supposed to do.

It's a very close copy of the Mod 84FS Cheetah firearm. Accuracy and muzzle velocity are both very good. Realism is outstanding in most respects - although real Beretta afficionados will wish for a full slide travel on the blowback action.

Buy an extra magazine or two to maximize your enjoyment of this BB-firing CO2 pistol. It's a HAM Gold Award winner! 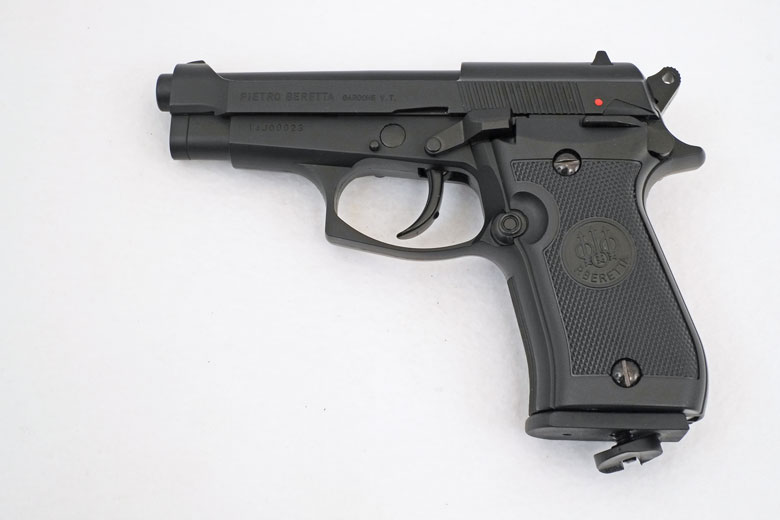 At a Street Price of around $90, the Beretta Mod 84FS blowback pistol plays in an extremely competitive section of the marketplace. There are many other choices of replica BB pistol available at this price, revolvers and blowback semi-autos alike.

In this environment, the Mod 84FS holds its own well. With the combination of realistic looks, firearms-like functionality, good accuracy, strong muzzle velocity and high shot count, this is a tough BB CO2 pistol to beat!

The black, powder-coated metal finish on slide, frame and barrel is well executed and the black plastic grips are extremely similar to those of the Beretta Mod 84FS Cheetah firearm original. The Pietro Beretta name and serial number markings are almost identical to those carried by the firearm original. 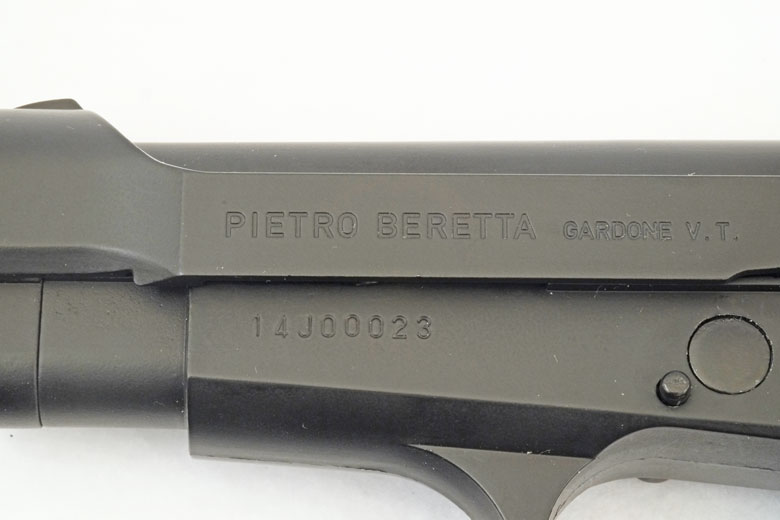 There is a joint between the two halves of the frame and this is somewhat unsightly at close quarters. But you have to be pretty close to the pistol to notice it.

The only other real departure from the firearm in appearance is caused by the plastic CO2 cartridge tightening key at the base of the magazine. This sticks out below the line of the magazine. The HAM testers objected to this at first, but soon became used to this and it ceased to concern them once the shooting started!

At 23 Ounces unloaded, the weight of the Beretta Mod 84FS blowback pistol is identical to that of its firearm counterpart.

Takedown is also undertaken in the same manner as the firearm, using the lever and pin provided in the frame. The slide lifts off. 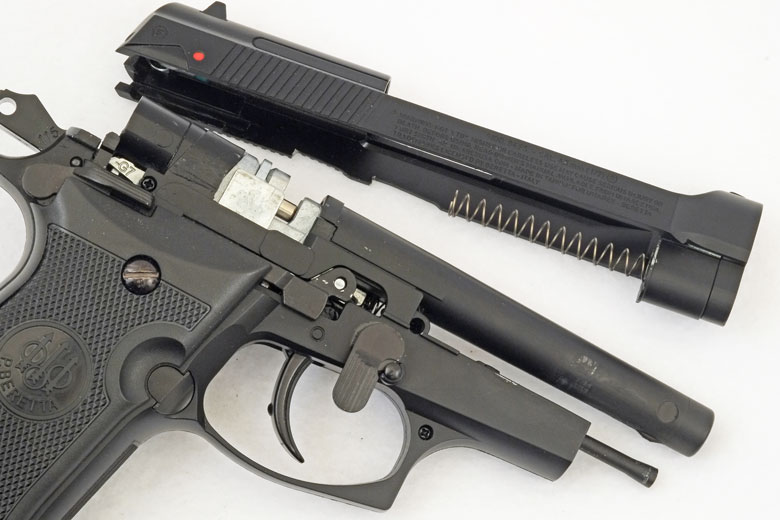 The Beretta Mod 84FS blowback pistol shot to the point of aim very well. All the standard HAM test BBs centered well on the bull of the target. This is excellent as the sights are non-adjustable for elevation and windage on the Mod 84FS, but such performance is by no means guaranteed on all BB-firing replica air pistols.

Accuray was easily within “minute of soda can” at 6 yards for the Beretta Mod 84FS blowback pistol. The best groups were obtained with the Umarex Steel Bbs and the Avanti Precision Ground Shot.

Even at 10 yards range, the Beretta Mod 84FS blowback pistol tested by HAM held all 10 shots inside the soda can target. This is creditable shooting for a compact, blowback BB replica air pistol.

HAM tester Doug Wall’s testing notes give his opinion of the Mod 84 as he was making the tests. “Right on!!”, he wrote. “Very good accuracy, centered on the bull!”

Ten-shot groups produced during HAM testing gave averages mostly in the 330 – 350 fps range. However, the first shots fired with both the Hornady Black Diamond and ASG pellets clocked 359 fps, with 356 fps for the first shot with Avanti Precision Ground Shot.

Given that the Beretta Mod 84FS blowback pistol was tested by HAM at a relatively low 67 degrees F, and that the muzzle velocity of all CO2 airguns increases with increasing temperature, it’s clear that the Mod 84FS matches the claims for muzzle velocity made by the manufacture. It will probably exceed the 360 fps claim at temperatures in the 80s.

The magazine capacity is claimed as 17 shots. This was achieved easily with all the standard HAM test BBs.

Consistency was a strong suit for the Beretta Mod 84FS blowback pistol tested by HAM.

As you can see from the test targets below, the Mod 84FS shot accurately with all the types of BB tested by HAM. The point of impact was also quite consistent.

Standard deviation – the measure of shot-to-shot variation during a string – was good at under 10 fps for all except one of the HAM test targets.

The trigger pull weight was also fairly consistent, varying only plus or minus 4 Ounces around the heavy 9 Lb 2 Oz average pull weight.

As with any CO2-powered BB pistol, best velocity and consistency will be with slow fire. Some velocity will be regained by resting the gun between strings, thus allowing it to warm up. You can see a steady drop in muzzle velocity from the Chrony printout on all of the targets as each string was fired. This is normal and not a defect in the Beretta Mod 84FS blowback pistol. 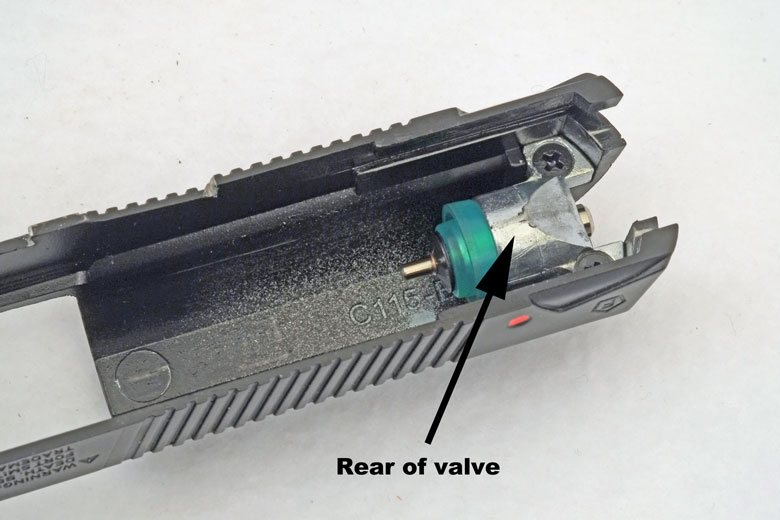 The trigger is heavy at 9 Lbs and works in double action mode only. This replicates the heavy trigger of the firearm quite closely.

The ambidextrous safety works well and blocks the trigger very firmly. But it does not incorporate the de-cocking feature of the firearm original.

Unfortunately the slide travel is restricted. It does move back under blowback, but not very far. This is probably one reason for the high shot count. 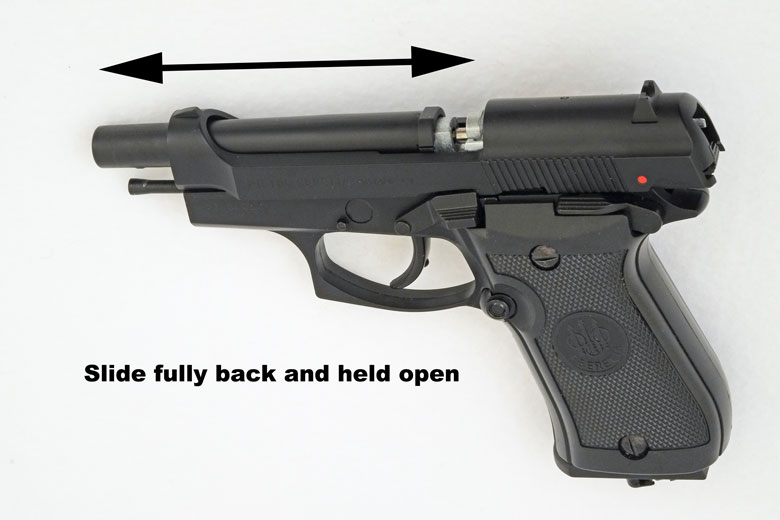 The Beretta Mod 84FS blowback pistol tested by HAM gave 99 shots at 67 degrees F with a muzzle velocity of above 260 fps from one 12 gram CO2 cartridge. Beyond this point, the gun would make more shots at a low muzzle velocity by manually cocking the hammer.  But blowback operation stopped at shot 99, so we’re treating this as the shot count.

Below, the magazine is manufactured of plastic with a metal valve section. It works well. 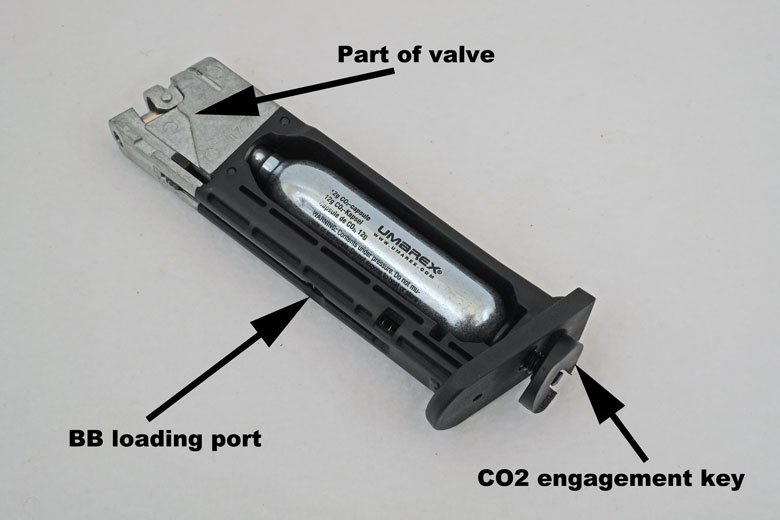 This is a great shot count for a blowback CO2-powered pistol and – like muzzle velocity – would be higher if shot in a warmer environment.

Although HAM has tested other blowback BB pistols having a similar shot count, the Beretta Mod 84FS blowback pistol combines that high shot count with a somewhat higher muzzle velocity.

Overall appearance of the Beretta Mod 84FS blowback pistol is very realistic. All the major controls – takedown lever, slide release, ambidextrous safety, hammer and trigger appear identical to those of the original firearm. The overall appearance and proportions are “dead on”. At just a few yards, it’s nearly impossible to tell from the firearms prototype.

Below. The trigger, magazine release, slide release and ambidextrous safety are well executed. 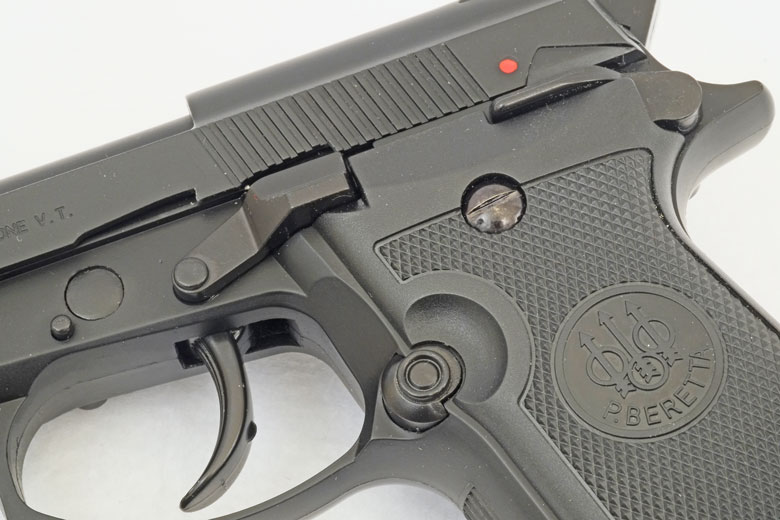 One minor difference is that the matt black finish of the external Aluminum parts is somewhat different to the blued steel finish of the original. This is, however, common to many replica air pistols.

The Beretta Mod 84FS blowback pistol is very easy to load with BBs – in fact it’s probably the easiest-loading BB replica air pistol HAM has tested to date. The BB follower locks down easily and there’s a large, chamfered hole for the BBs to drop into.

Feeding was good throughout the HAM tests. No jams or feed failures were recorded with the Beretta Mod 84FS blowback pistol.

Additional magazines are readily available at about $25 each. HAM suggests that shooting fun would be maximized by having several loaded and gassed-up before each shooting session, rather than stopping to reload BBs every 17 shots.

The operator’s manual supplied with the Beretta Mod 84FS blowback pistol is well-illustrated and explains the functionality clearly in English, Spanish and French.

Like other BB-firing replicas from Umarex, the Beretta Mod 84FS blowback pistol has a 90-day warranty. Although this is greater than the warranty period provided by some other manufacturers (ASG and SIG give just 60 days), Crosman provides 12 months warranty on its BB replica pistols and Gletcher gives a class-leading 18 months.

As with other BB pistols, the Mod 84FS is not designed to be repaired – certainly not by the customer. However, as part of the valve is contained in the magazine, it can be easily replaced if defective, simply by replacing the magazine. The rear part of the valve is also unusually accessible on this model and, being retained by a couple of screws, could be replaced if necessary by a knowledgeable owner in the unlikely case of trouble. 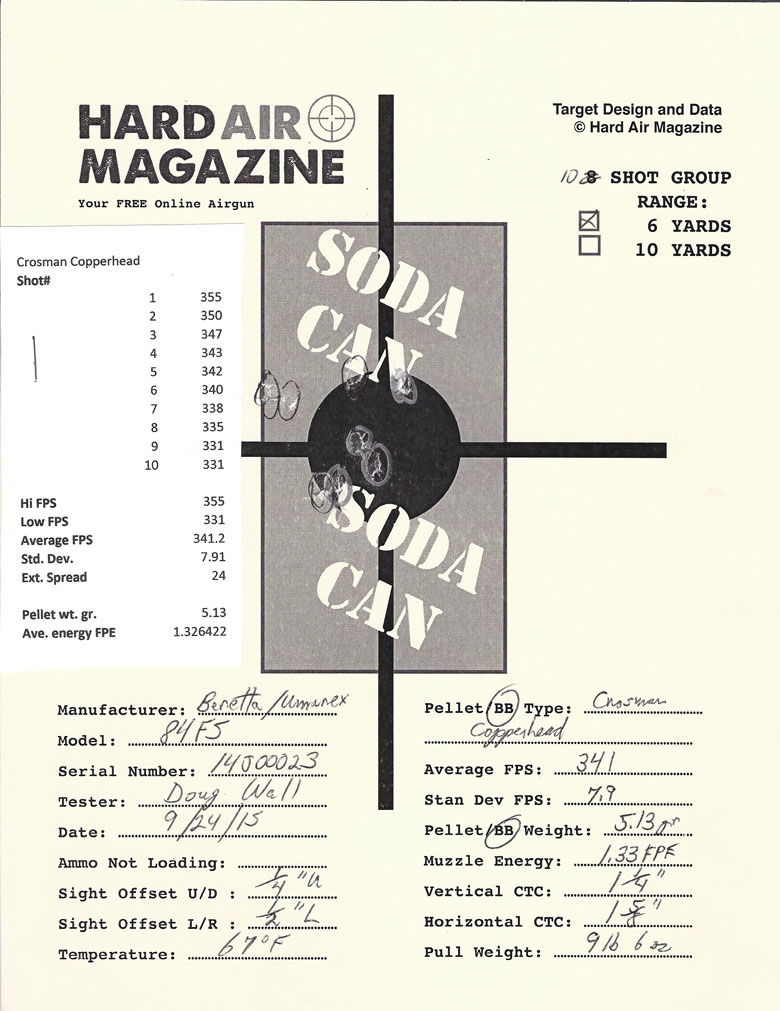 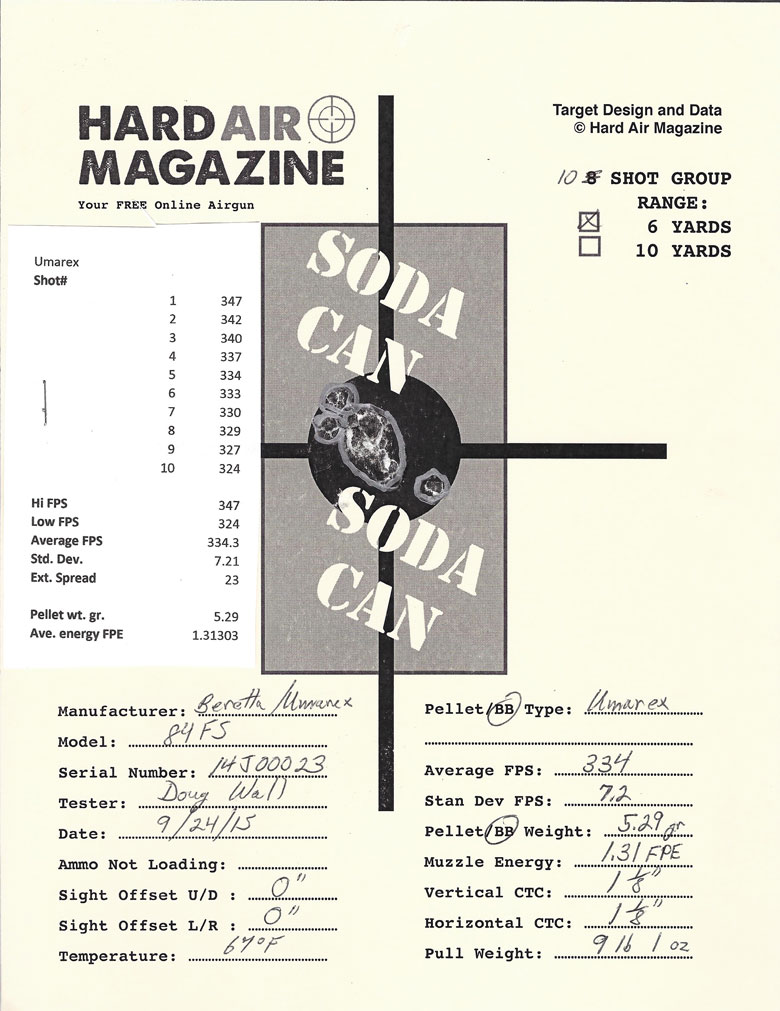 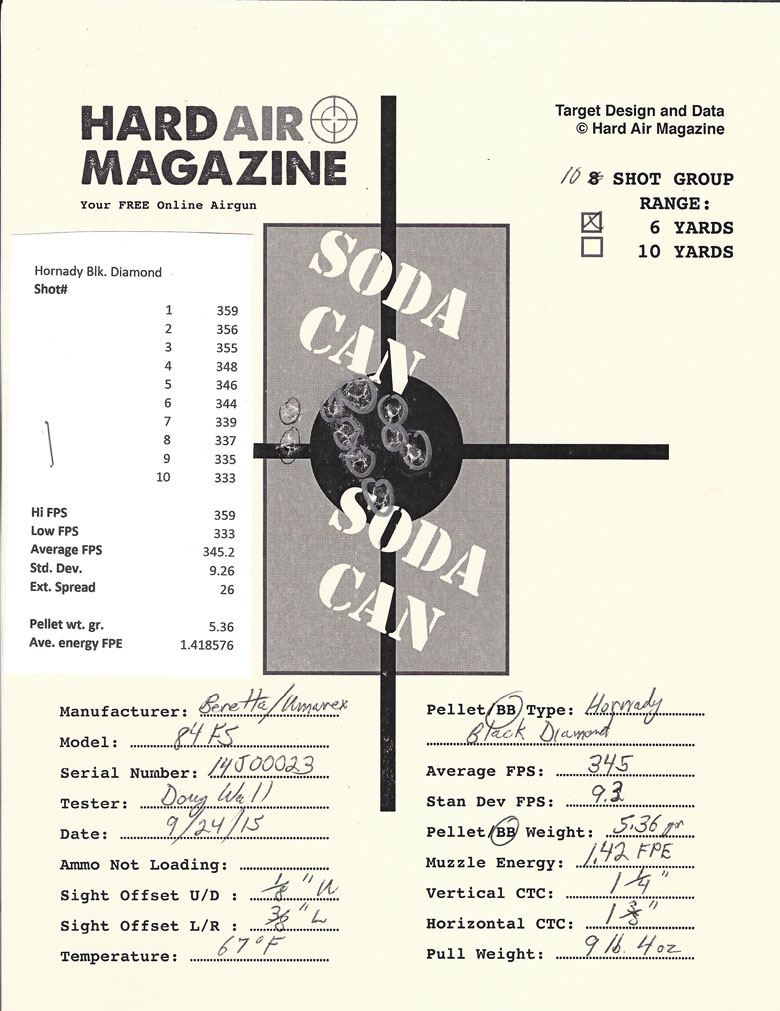 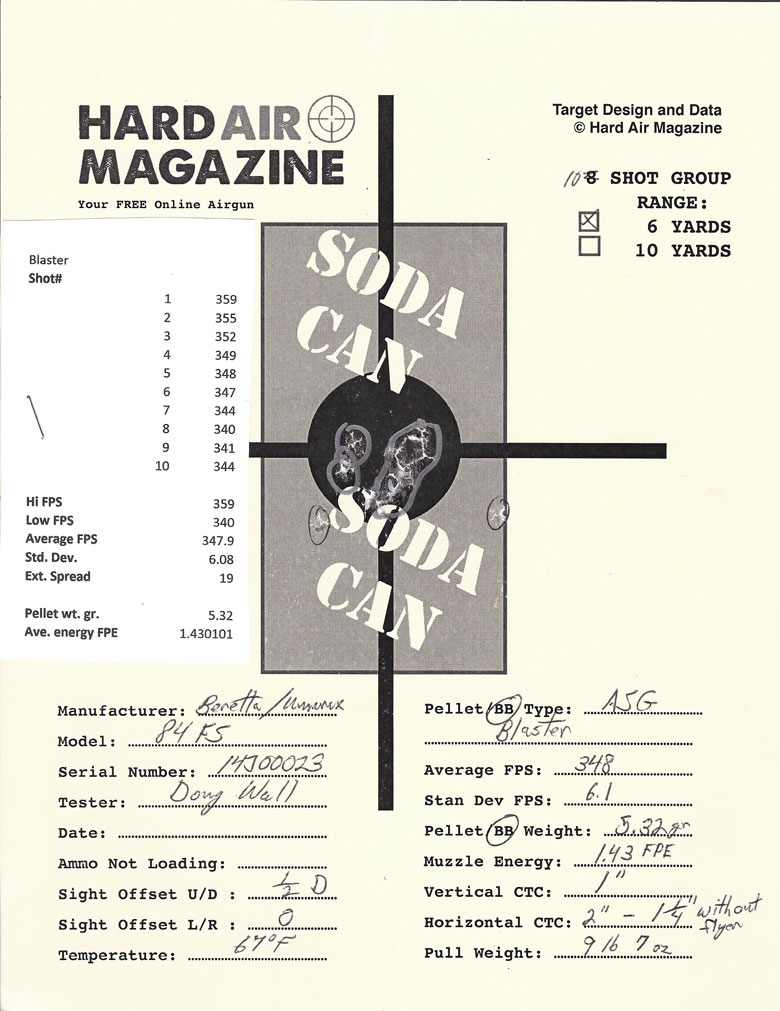 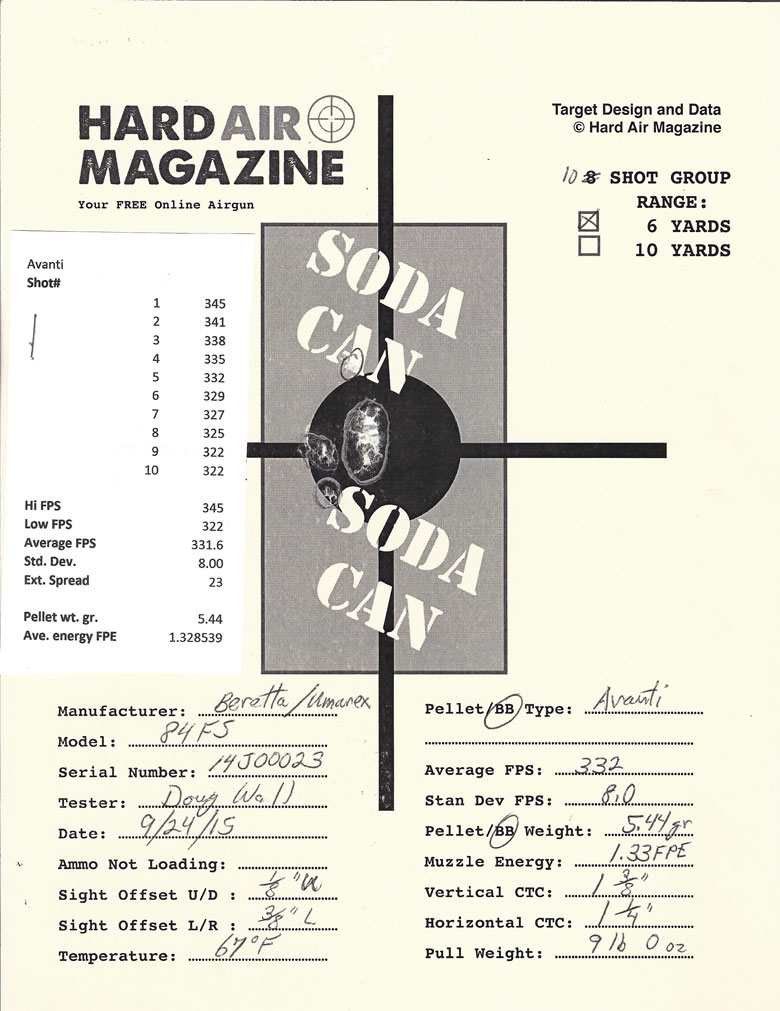 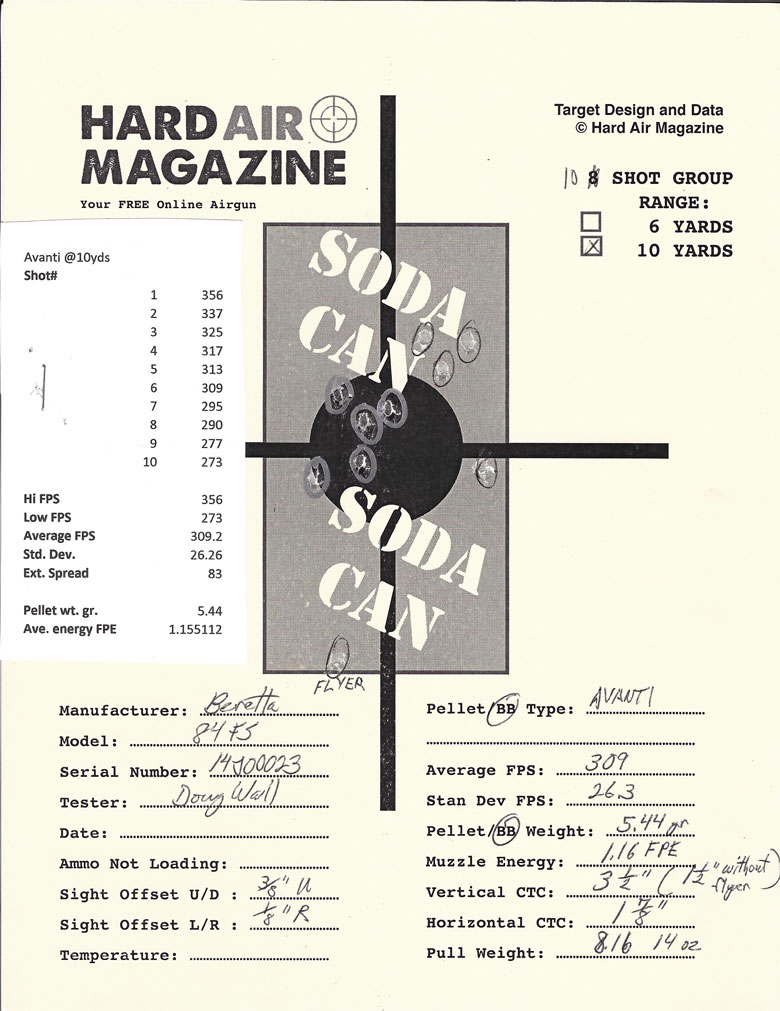