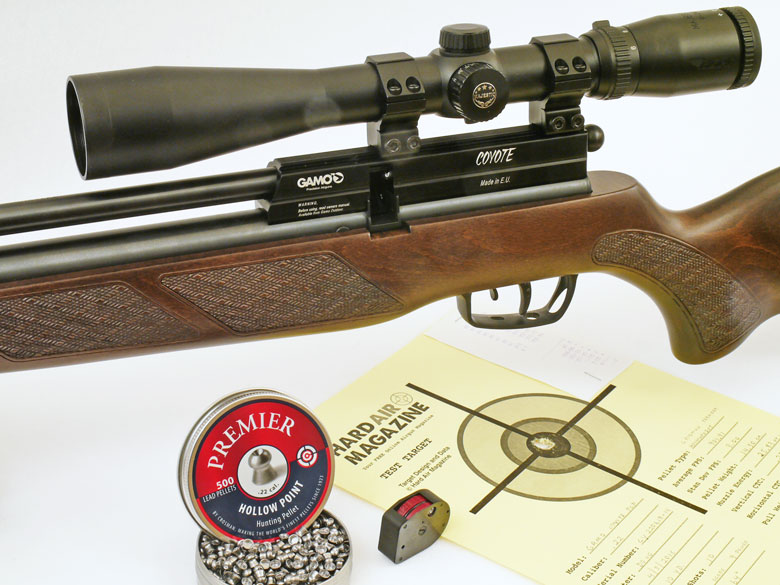 The Gamo Coyote air rifle is a new model that is closely based on the BSA Buccaneer SE. This is no surprise as Gamo owns BSA and it's a sensible way for Gamo to attack the PCP air rifle market.

The Coyote is a capable PCP air rifle that benefits from outstanding consistency in muzzle velocity. It's compact design will attract shooters who value handling and "pointability".

If noise level is not a concern to you, the Coyote is attractive today. If it is, Gamo will have a quiet model in future.

HAM hopes that the cost of spare magazines (clips) can be less than the $70 currently being asked. That would make the Coyote even more attractive to many hunters and target shooters. Gamo is working on a competitive price for this item.

75%
HAM Rating
You have rated this
Full Review

With a Street Price of $500, the Gamo Coyote air rifle sells for $100 less than its BSA Buccaneer SE cousin. That’s a significant saving against such a similar model.

But, of course there’s an elephant in the room! And it comes from Crosman.

The Coyote enters a US market that is dominated by the Benjamin Marauder. Everyone’s going to make the comparison between these two air rifles.

Obviously any individual’s choice between these guns will be down to personal needs and preferences. Here’s how HAM sees the comparison…

Like most high power PCP air rifles, the Coyote does not like light weight pellets. It gives its best accuracy and highest muzzle energy – knock down power – when shooting mid-weight and heavier lead pellets. As you can see from the table below, muzzle energy was below 24 Ft/Lbs with alloy pellets but rose to almost exactly 27 Ft/Lbs (OK, 26.99 Ft/Lbs to be precise) with the heaviest, slowest pellets tested – the H&N Baracuda Match 21.14 Grain pellets.

Best accuracy in this HAM test review of the Gamo Coyote PCP air rifle was achieved with mid weight Crosman Premier Hollow Point pellets. As we’ve said in previous HAM test reviews, this is a very significant benefit because the majority of airgun shooters simply go to Walmart and buy the pellets they see there.

As Crosman Premier Hollow Points are available at Walmart stores everywhere, the Gamo Coyote PCP air rifle will probably mostly be shot with them. Fortunately, the results will be excellent!

The Gamo Coyote PCP Air Rifle is fitted with Gamo’s Custom Action Trigger (CAT). This is a two stage trigger with manual safety – our favored configuration.

The owner’s manual provided with the Gamo Coyote PCP air rifle give instructions for how to adjust the pull length of the trigger’s first stage, together with the pull length and weight of the second stage. This offers the ability to customize the trigger that’s expected by most purchasers of air rifles in this price range.

The owners manual advises that the trigger pull weight should not be less than 3 Lbs, to avoid the potential for accidental discharge. But the Coyote tested by HAM was supplied by Gamo with a pull weight of 2 Lbs and did not seem to be unsafe. HAM advises caution and double-checking with Gamo USA on this issue before adjusting the trigger on your gun. 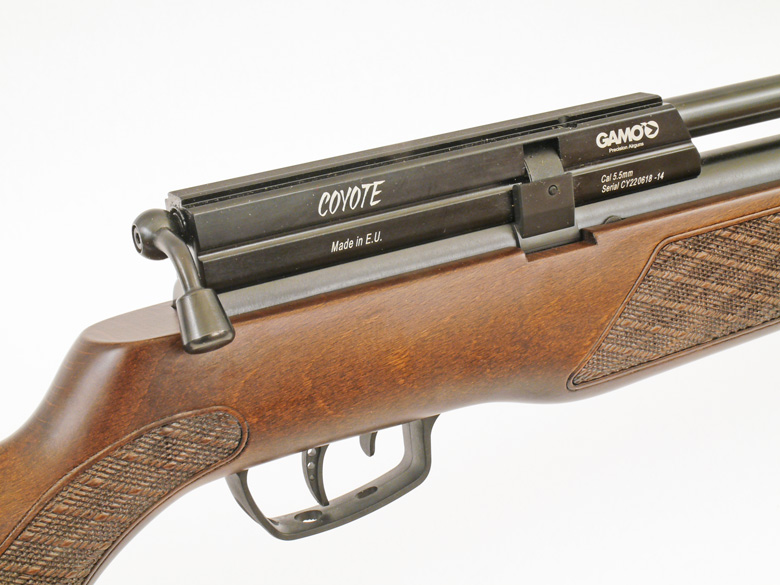 As the Gamo Coyote PCP air rifle is such a new model, it’s understandable that the Gamo USA website does not feature it yet. So, we’ve taken most of the maker’s claims from Pyramyd Air’s website.

The Gamo instruction manual claims the muzzle energy of the Coyote in .22 caliber as 30 Ft/lbs. The maximum muzzle energy recorded in the HAM tests was 26.99 Ft/lbs. That’s 10% lower than the claim.

The consistency delivered by the Gamo Coyote PCP air rifle tested by HAM was outstanding!

Trigger pull weight varied by only plus or minus 1 ounce from the average of 2 lbs 0 oz.

Standard Deviation (the measure of shot-to-shot muzzle velocity variability) was as low as 1.73 fps with H&N Field Target Trophy pellets. That’s incredible consistency. Even more impressive was the Standard Deviation of 3.0 fps or less with as many as 4 of the pellets in the standard HAM test suite. That’s unprecedented!

With the exception of the dislike of light weight pellets – itself common for many powerful PCP air rifles, the Gamo Coyote is probably the most consistent air rifle tested by HAM to date!

Some Internet sources claim that the Gamo Coyote PCP air rifle is fitted with a silencer. This is NOT correct.

The Gamo Coyote PCP air rifle is fitted with an air stripper at the barrel end, but this makes no perceptible reduction in the noise level of the gun. As you would expect from a fairly powerful PCP air rifle with a relatively short barrel, this gun is rather loud.

The muzzle is threaded for a screw-on silencer, but this requires the owner to source a separate silencer and go through the cost and paperwork involved with obtaining a Federal license to fit and use one legally in the USA. This threaded barrel is a legacy of the British BSA design. Unlike in the USA, silencers are not regulated by the UK government and are actually encouraged to be used freely on air rifles!

The photos below show the air stripper and threaded muzzle of the Gamo Coyote air rifle. Also visible is the pressure gauge and probe-filling port with cover at the front of the air tube. 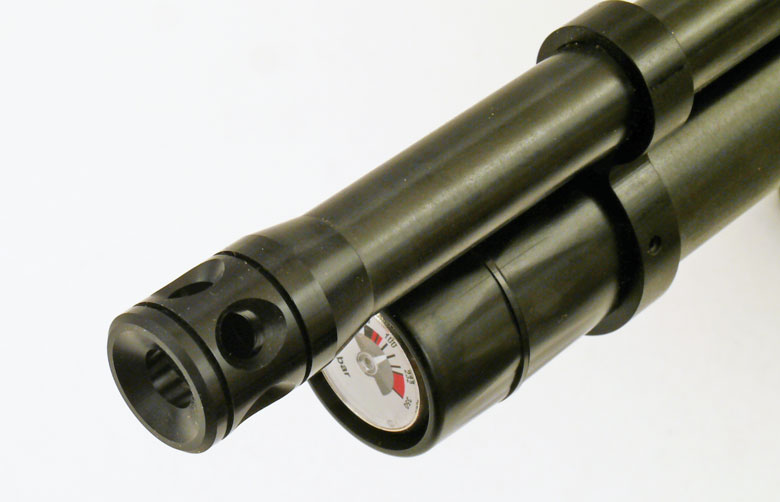 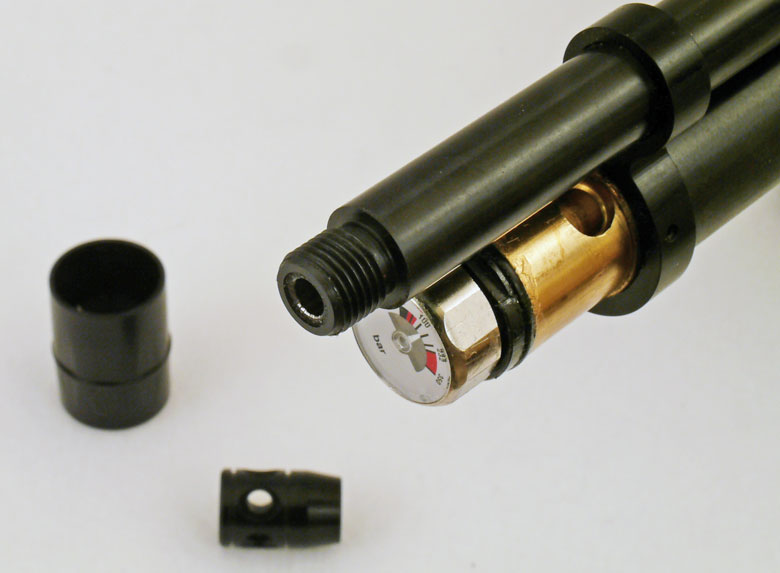 Gamo has already announced that a future version of the Coyote will be available with a built-in silencer and this will obviously address this issue for those shooters who want a quiet air rifle. There’s no availability date for that model at the time of writing this review.

The Gamo Coyote PCP air rifle is a scope only model. The choice of scope is left to the buyer.

No iron sights are fitted, but excellent long scope dovetails are cast into the top of the breech. This provides firm scope mounting, together with a wide range of positioning possibilities to accommodate various scopes and eye relief requirements.

Due to the lack of recoil of the Gamo Coyote air rifle – as with all other PCPs – there’s no need for a Weaver/Picatinny mount. That’s only needed for spring/piston or gas ram air rifles with their heavy recoil.

The HAM scoring for this section is based on our standardized rating structure. We assume a typical price for scope and mounts fitted to the Coyote at $150.00 and the score at 95%. (Obviously no-one will spend $500 on a Gamo Coyote air rifle and then waste their investment with a scope costing much less than this). 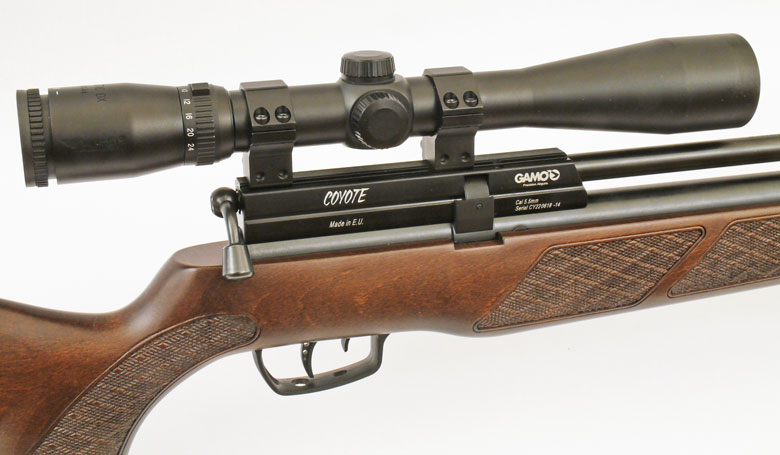 The Coyote’s regulated design gives it outstanding consistency in muzzle velocity. This translates into exceptional accuracy potential – particularly at longer ranges – as the minimal change in muzzle velocity over large number of shots ensures a more consistent point of impact on the target.

The Gamo Coyote PCP air rifle is compact – almost carbine length – and this makes for good balance and easy handling. HAM tester Doug Rogers noted that “The Coyote has a good hold – it’s easy to shoot. It doesn’t feel as heavy as it looks”.

The chunky beech ambidextrous stock has plenty of checkering, again making it easy to hold consistently – an important feature that helps practical accuracy. Practical accuracy is also enhanced by the good cheek weld provided by the stock for both right-handed and left-handed shooters. 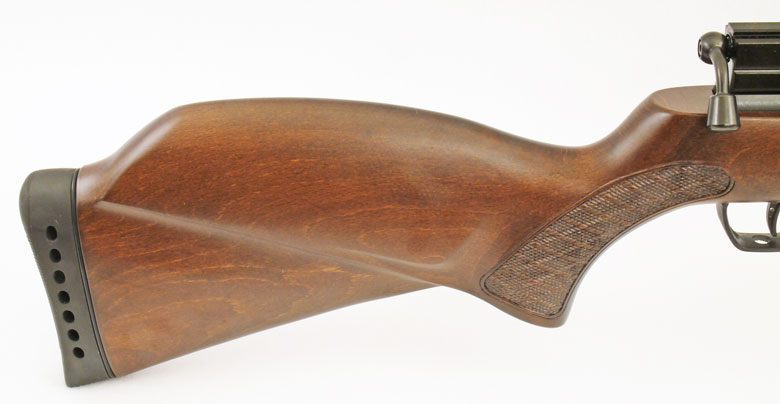 The Gamo Coyote PCP air rifle uses a 10-shot magazine that is easy to load. It’s positively retained in the gun by a magnetic “catch” and located by a pin. This is the same magazine as is used in BSA air rifles, so it’s well proven and provides good feeding. Different calibers are indicated by colored rotary pellet holders. Shot numbers are molded in the clip and visible through a window in the top.

A BSA single shot adapter is also available and should fit the Coyote, for those who prefer single loading their air rifles.

The bolt action functioned faultlessly throughout the HAM test. The feel encourages deliberate bolt operation, as is common with many bolt-action PCP air rifles.

As expected, these shootability benefits give the Gamo Coyote PCP air rifle an excellent (low) RateAGun score of just 3.4.

Note that – as with most PCP air rifles – the Coyote has no double feed prevention. Don’t operate the bolt action more than once before pulling the trigger or a jam will occur.

The HAM team liked the traditional looks of the Coyote.

The chunky wood stock is well finished and has an excellent rubber buttpad.

Metal parts are well blued and the finish is at the expected level – comparable with other PCP air rifles in this price range.

As a new model, the Gamo Coyote PCP air rifle is not yet widely available. Online is the way to go – it’s available directly from Pyramyd Air, for example.

Gamo offers a standard 12 month warranty with the Coyote and its obvious BSA design heritage means that good long-term reliability is to be expected from the start.

The Instruction Manual for the Gamo Coyote PCP air rifle is very brief: there’s just 2 pages per language. It covers the basics but HAM would like to see more explicit information about filling the gun with air, for example.

The Coyote uses a probe to connect an air tank to the Coyote. The HAM team would prefer to see a quick disconnect system as we feel that the probe system requires more protection to prevent dirt from being attracted to the probe and entering the gun during filling. Also, most users will need an adapter to connect the probe to their HPA tank.

As the Gamo Coyote PCP air rifle has a maximum fill pressure of 3365 PSI, it’s very tough to fill to maximum pressure with a hand pump. That’s VERY, VERY tough unless you have bodybuilder grade physique!

A High Pressure Air Tank is essential for filling this air rifle to full capacity, otherwise you will not achieve the full number of shots per fill.

The Coyote’s pressure gauge is calibrated in Bar, the International Standard measurement system for pressure. This is unfamiliar to most US users, but it’s easily mastered – stop filling before the needle reaches the red line on the gauge!

But HAM really does not like the position of the pressure gauge on the Coyote. It’s in the end of the air tube and so requires the user to read by looking down from the muzzle end of the gun!

Although this gauge location is also used on some other PCP air rifles, this has to be an obvious safety hazard. Be VERY SURE that the Coyote is not cocked or loaded and that the safety is engaged before checking the pressure. Again, users will become used to this, but a gauge in the more normal position in the underside of the stock has to be a better solution.

Finally, spare parts for Gamo air rifles are not generally available from Gamo, except as part of a repair undertaken by the company. This being in strong contrast to the approach taken by Crosman which make spares for Benjamin Marauders and many models readily available. 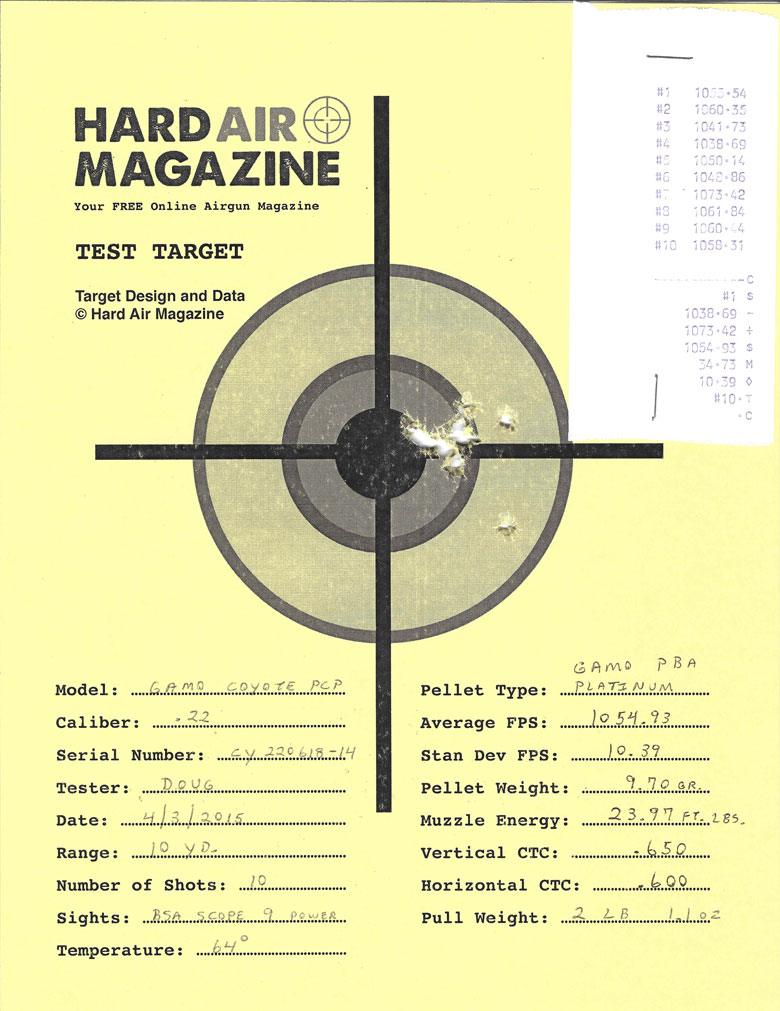 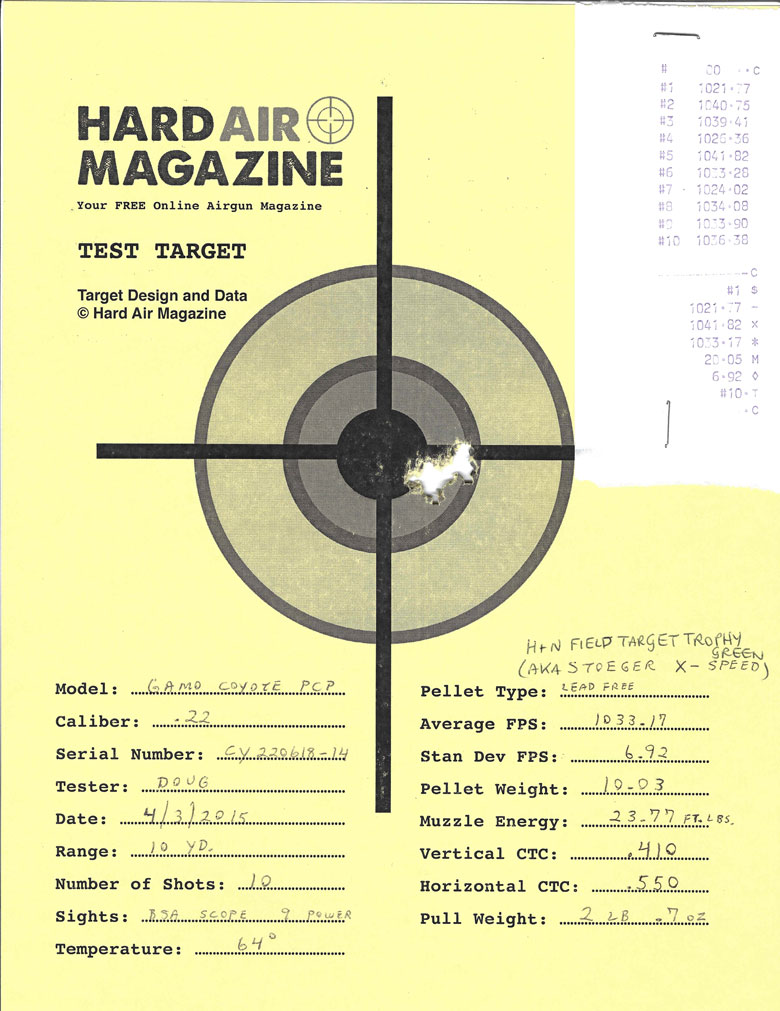 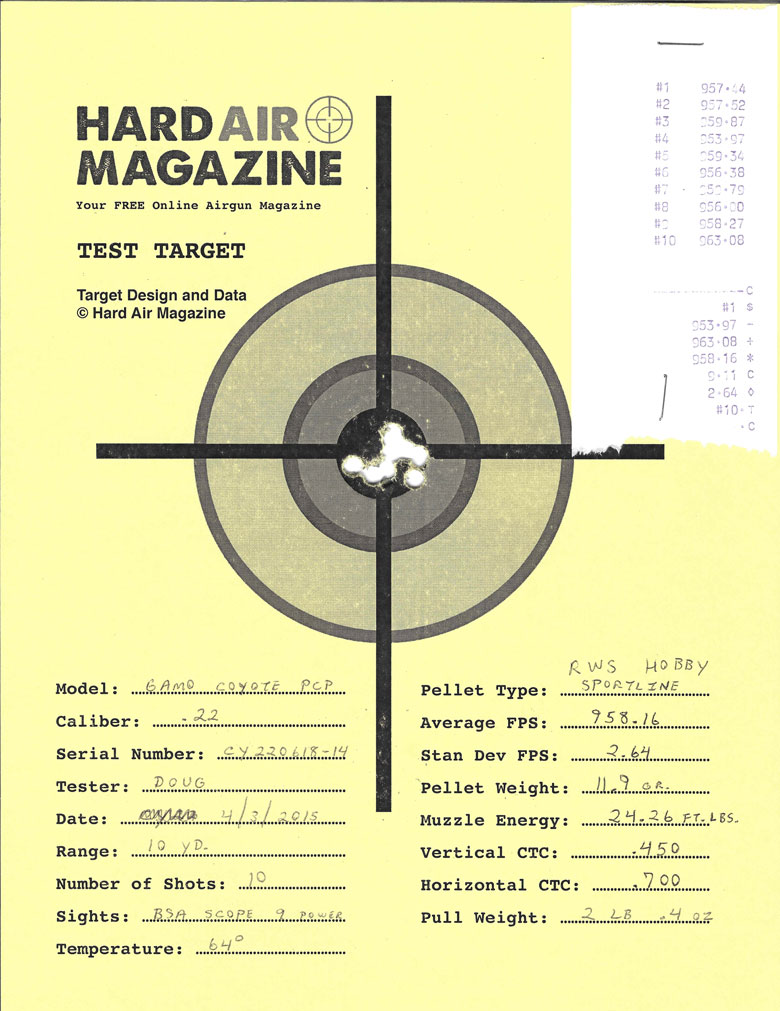 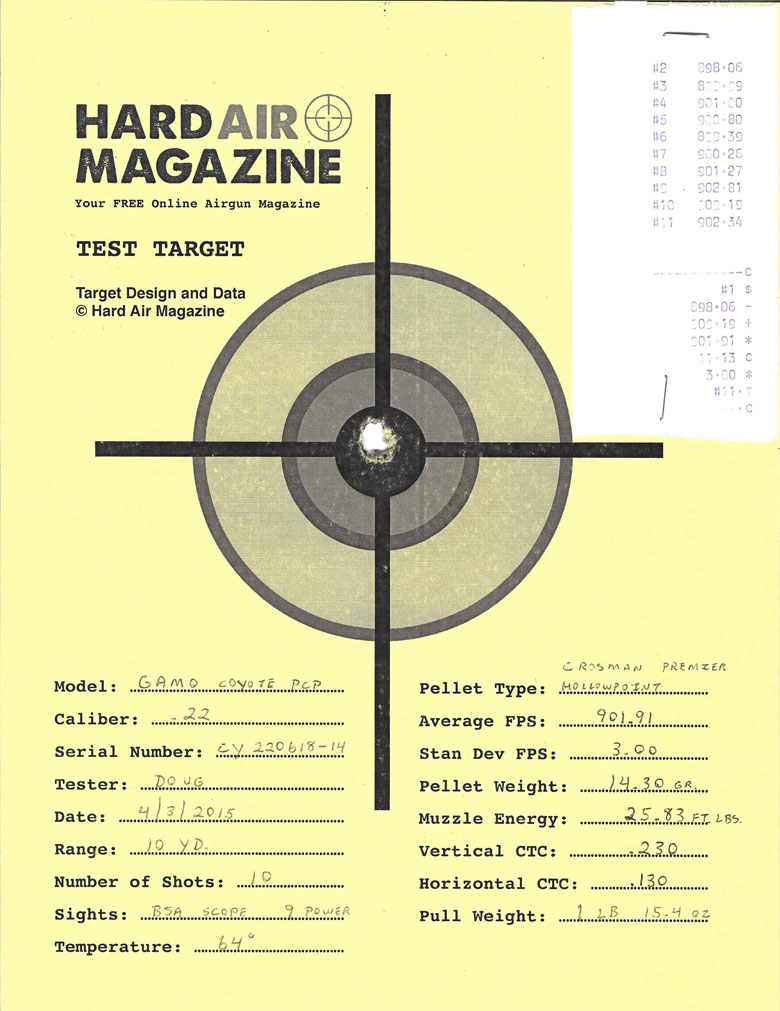 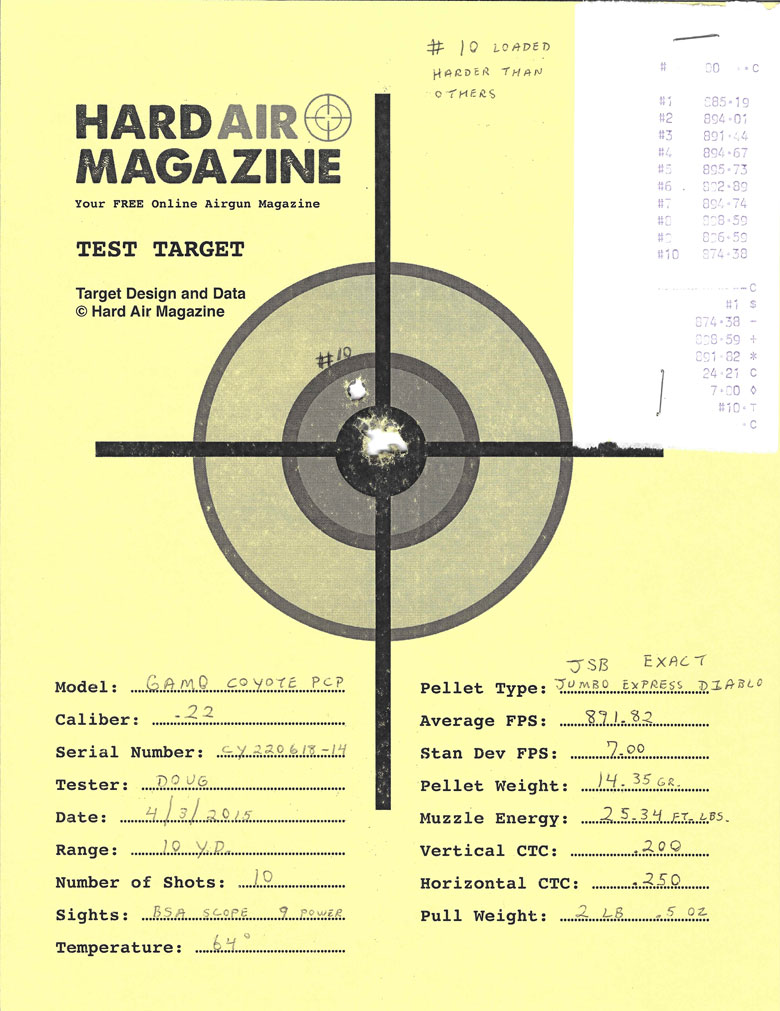 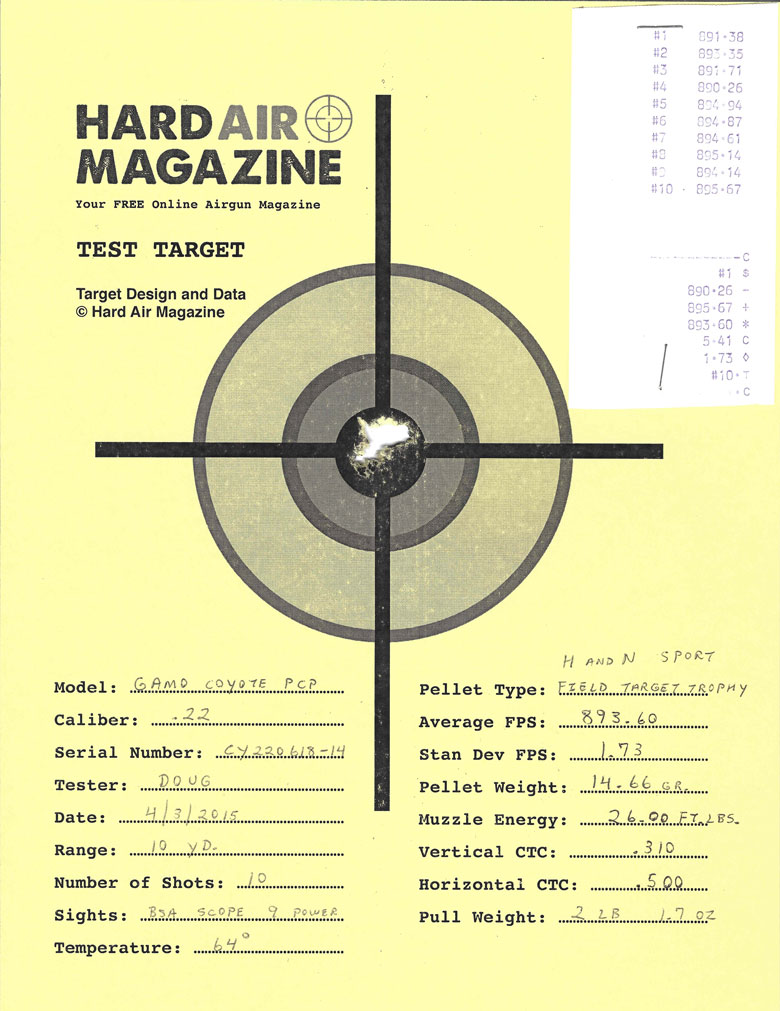 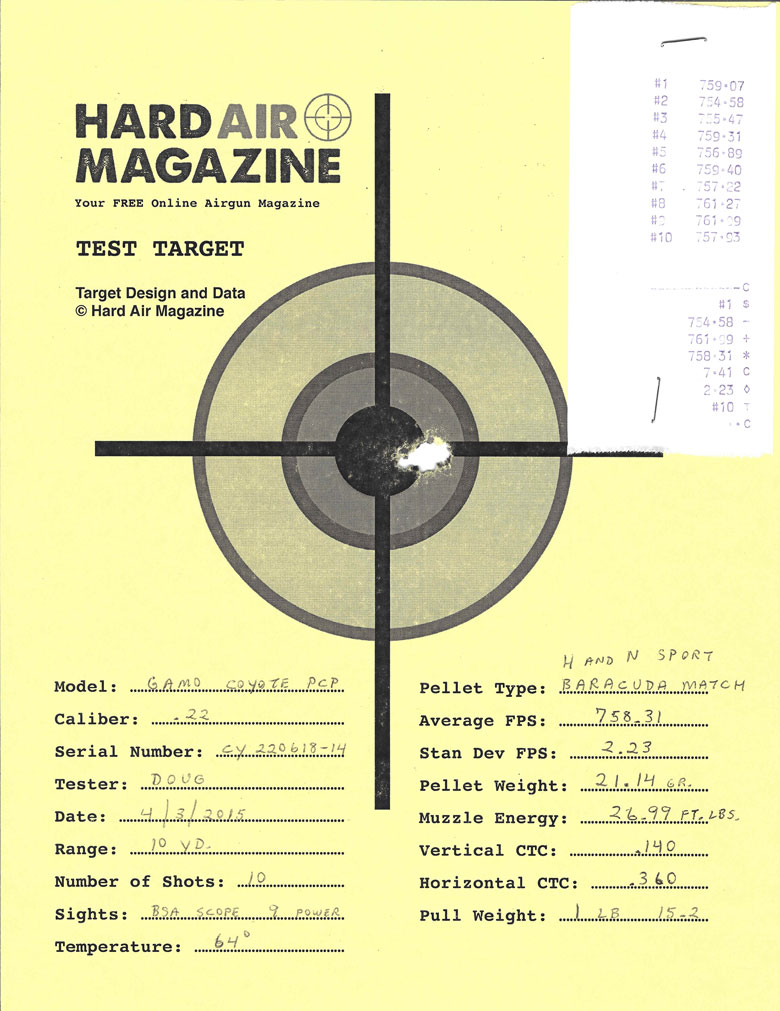 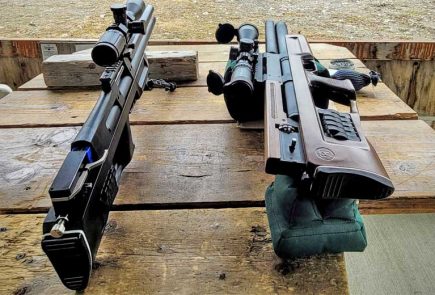 Which Is Best? Cricket 1 Or Cricket 2?
Read More 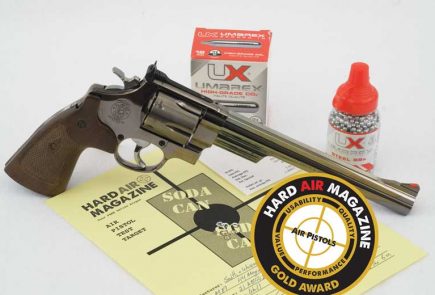 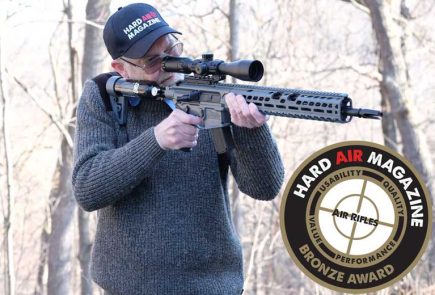