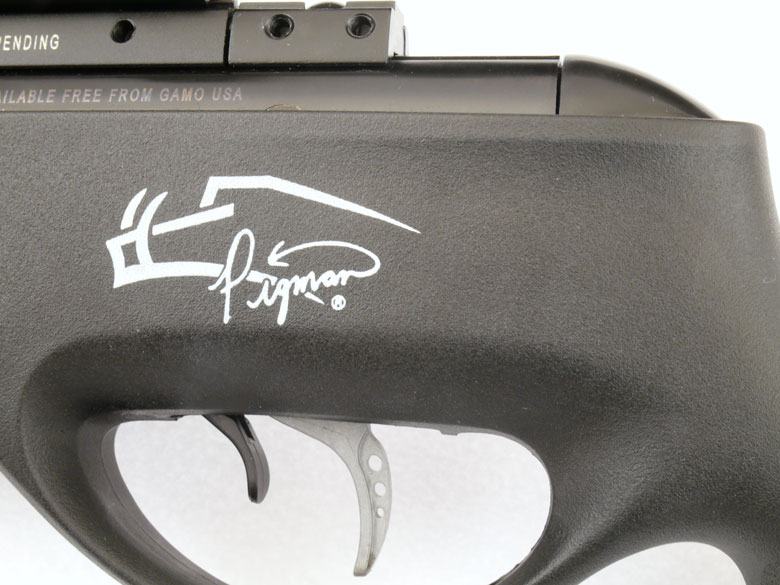 Poor accuracy.
Hard to cock.
Scope could be better at close range.

There are many things to like about the Gamo Mach 1 Pigman Edition Air Rifle but, unfortunately, accuracy is not among them - at least in the example tested by HAM.

This is clearly not a plinker, an air rifle for kids of for shooters of less than average strength. The very heavy cocking effort rules that out.

With better accuracy, this could be a good, powerful hunting air rifle. But the HAM team considers the accuracy insufficient for making humane, one shot kills at any reasonable range - at least with the gun and pellets we tested.

At the time of writing, the Street Price the Gamo Mach 1 Pigman Edition air rifle ranges quite widely between $270 and $340. So it’s worth shopping around more than usual.

In this rather wide range there are many other dedicated break barrel hunting air rifles such as the Benjamin Trail NP2, Hatsan 125, other Gamo models such as the Whisper Fusion Pro and some RWS Diana 34 bundles.

This makes it tougher than usual to give a value for money for the Mach 1 Pigman Edition, as Street Prices are normally more consistent than in this case.

Overall, the Gamo Mach 1 Pigman Edition air rifle tested by HAM offered many features that have value in a hunting air rifle, but it was let down by poor accuracy.

As is typically the case with sping/piston and gas ram air rifles, both muzzle energy and muzzle velocity drop with increasing pellet weight. This is so with the Gamo Mach 1 Pigman Edition air rifle. It’s not a complaint but an observation of this type of air rifle power plant. PCP and CO2 guns, for example, show increased muzzle energy with heavier pellets, even if the muzzle velocity is less than with lighter ammo.

In HAM’s testing, the Gamo Mach 1 Pigman Edition air rifle produced its best accuracy with 14.3 Grain Crosman Premier Hollow Point pellets and 14.66 Grain H&N Field Target Trophy pellets. Sadly, this did not indicate an accuracy “sweet spot” in the 14 – 15 Grain pellet range as 14.35 Grain JSB Jumbo Exact pellets gave poor results, as you can see from the test targets below.

The Gamo Mach 1 Pigman Edition air rifle tested by HAM showed a tendency to throw fliers with some pellets, but not with others – a somewhat unnerving trait that sent HAM tester Paul Manktelow back to shoot his Air Arms TX 200 for a “sanity check” that the issue was with the gun and not him!

Yes, you guessed – Paul immediately shot one hole groups with the TX. It wasn’t him…

Of course, accuracy could be great with the “perfect” pellet, but HAM certainly didn’t find that in the course of our testing.

The CAT (Custom Action Trigger) fitted to the Gamo Mach 1 Pigman Edition air rifle won praise from the HAM testers. The CAT trigger allows users to adjust the first and second stages of the trigger independently: a good feature. 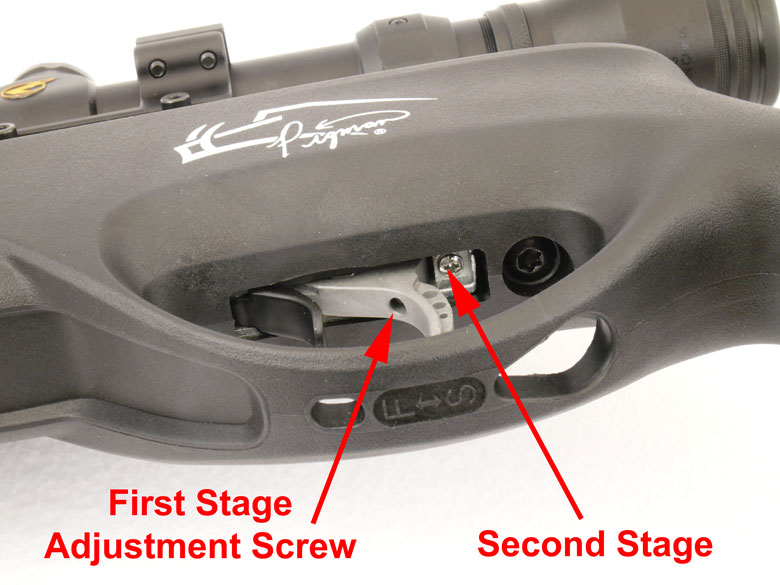 In fact, the HAM team – as always – shot the gun “straight from the box” and found the factory trigger setting of the Gamo Mach 1 Pigman Edition Air Rifle to be excellent. The first stage is very light and there’s a distinct feel as the second stage engages. From this point, the trigger releases with a click, much like that of a light switch. We liked it!

But cocking effort was something else! The Gamo Mach 1 Pigman Edition air rifle tested by HAM required a cocking effort of 49 Lbs. That’s among the hardest ever recorded in HAM testing.

Of course, a gas ram hunting air rifle of this power is never going to be easy to cock. It has to be so to obtain the high knock down power. And for a strong shooter, it’s not a problem. At least not for the few shots that airgun hunters usually require.

But a cocking effort of this magnitude means that only a very few, very fit shooters will want to make more than a few shots at a time with the Gamo Mach 1 Pigman Edition air rifle. This is emphatically NOT an air rifle for casual plinking, young shooters or target shooting.

Of course, that’s OK, so long as this gun is purchased by the right people for the right reasons. But for those drawn to the muzzle velocity and power of this air rifle without an understanding of just how much effort is required to cock it, the Gamo Mach 1 Pigman Edition air rifle could be somewhat of a shock. 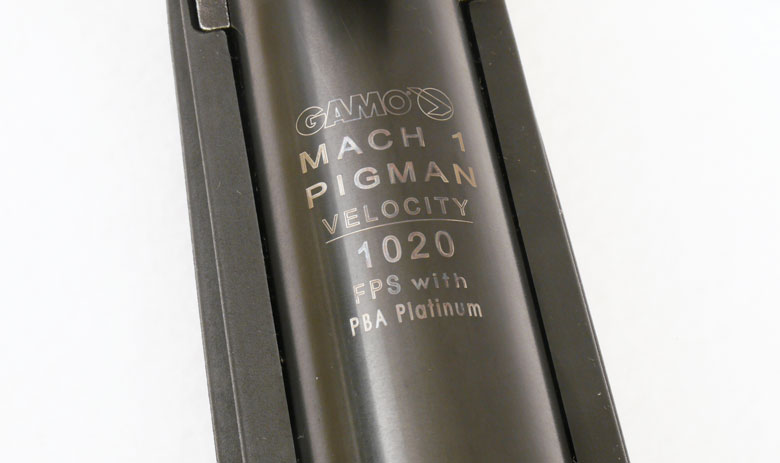 The Mach 1 Pigman Edition also features Gamo’s RRR (Recoil Reducing Rail) that is claimed to reduce the effects of recoil from powerful spring/piston and gas ram air rifles like this. HAM doesn’t have a way to test this claim. 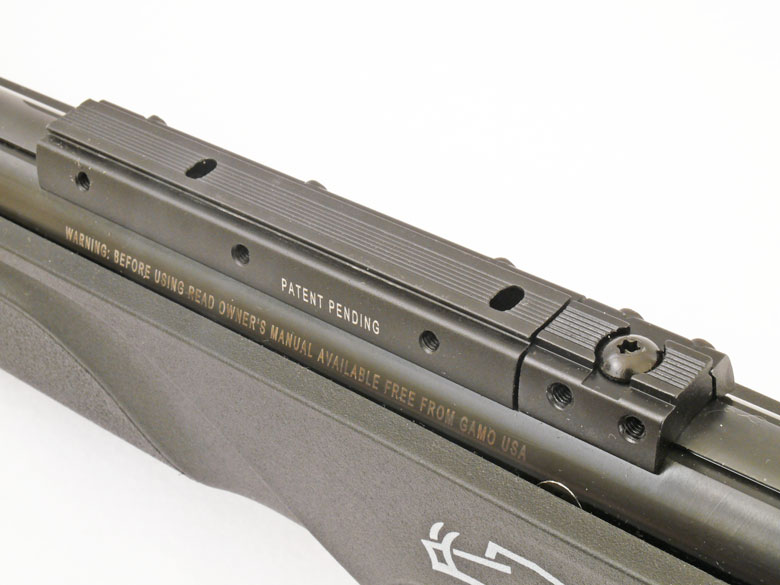 Standard Deviation was very low for the heavier pellets in the HAM standard test portfolio. All the lead pellets showed a Standard Deviation of 6 fps or less (well, OK 6.08 fps or less). For the three heaviest pellets tested, this fell below 4 fps – a really excellent performance.

Likewise, trigger pull weight was extremely consistent, varying by a maximum 5 ounces between the lightest and heaviest pull weight recorded in the HAM tests. This is outstanding performance.

Unfortunately this consistency was badly let down by the poor and variable accuracy demonstrated in the test targets. 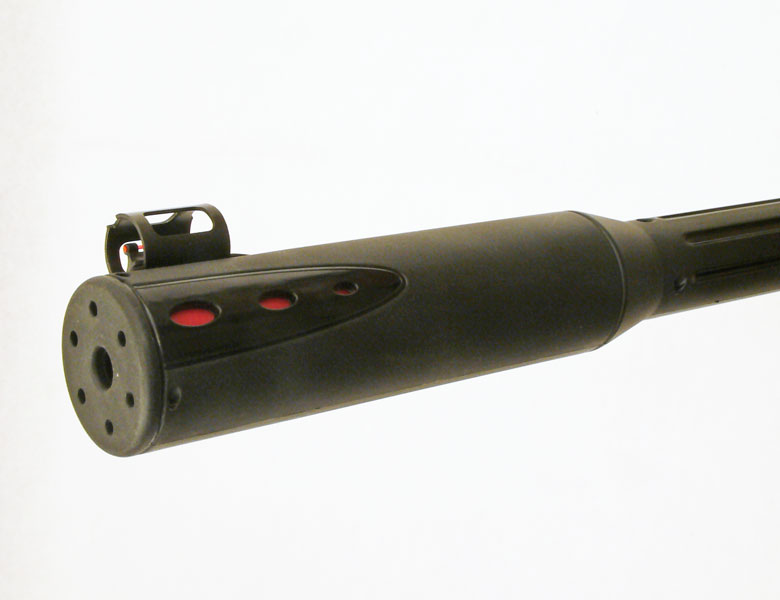 HAM tester Paul Manktelow commented in his testing notes: “The noise level is much less than I expected for an air rifle of this power level. Part of this could also be due to the gas ram”.

As pellets fired by the Gamo Mach 1 Pigman Edition air rifle in .22 caliber do not exceed the speed of sound (about 1100 fps), this gun will be quiet with any pellets, even light alloy ammo such as Gamo’s Raptor Platinum PBA pellets.

The Gamo Mach 1 Pigman Edition air rifle is fitted with standard Gamo front and rear open sights. These have fiber optic elements to aid shooting in poor light and are perfectly satisfactory in use.

But of course, very few people will use these open sights. They will be using a scope. 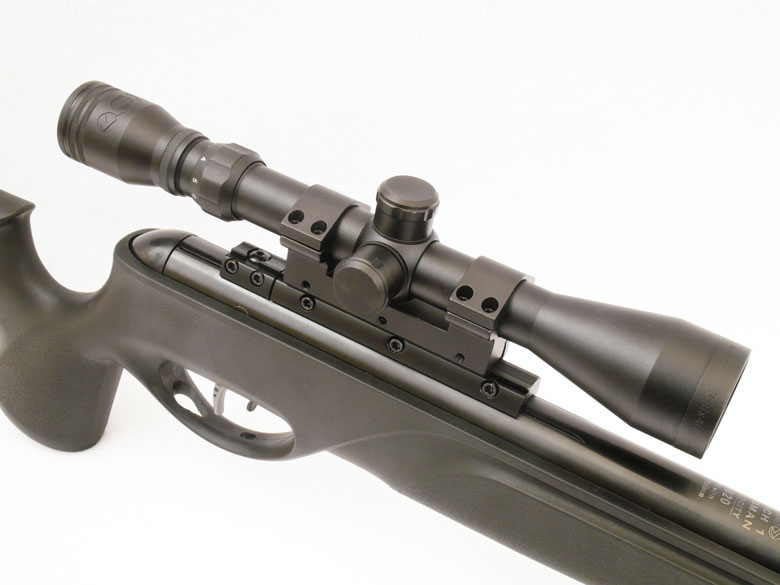 The scope has a duplex reticle, rather than the much more useful mil dot type that can be used for instant adjustment of range and to account for changes in wind in the field. There is also no AO (Adjustable Objective) capability for precise focusing on close range targets.

Sharpness of the 3-9 x 40 scope bundled with the Gamo Mach 1 Pigman Edition air rifle is good beyond about 15 – 18 yards range. But at closer ranges the image is not sharp enough for precision shooting. Contrast is high with this scope and the reticle is clearly defined.

It could be argued that an air rifle with the power of the Gamo Mach 1 Pigman Edition is likely to be used at ranges further than 18 yards, but the scope is a definite limitation for close range shooting.

The one-piece mount seemed up to the job and no movement or “walking back” of the scope occurred during the course of the HAM shooting tests.

As you may expect by now, shootability of the Mach 1 Pigman is somewhat of a mixed bag.

The light weight makes this air rifle easy to carry and to shoulder for a shot. Including the mounted scope, the Pigman Edition weighs just 7lbs 6oz.

And despite this light weight, recoil was not felt as unduly fierce for the power by the HAM team. The trigger encourages good shooting and the scope is adequate at typical hunting ranges.

The shot cycle of the IGT gas ram power plant is smooth, too.

But this is a long, bulky air rifle that’s best handled by a physically large person. And – here we go again – the cocking effort of the Gamo Mach 1 Pigman Edition air rifle really makes shootability OK for hunting, but not for other types of shooting.

As always, HAM likes the manual safety that’s located conveniently inside the trigger guard just ahead of the trigger itself. It’s easy and positive in use. 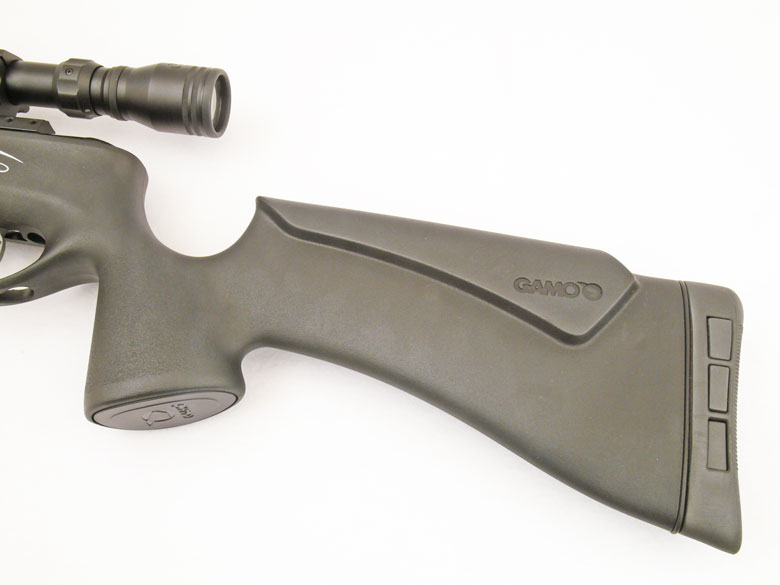 The ambidextrous cheek piece of the buttstock was comfortable for the HAM test team and it’s height gives the good cheek weld that’s essential for good shooting. The pronounced “pistol grip” behind the trigger made it easy to hold the Gamo Mach 1 Pigman Edition air rifle well in the shooting position and works well for those shooters with larger hands.

The HAM team also like the oversize trigger guard. This molded as an integral part of the buttstock and provides plenty of space for a gloved trigger finger. This is a very useful feature for cold-weather hunting with the Mach 1 Pigman Edition.

Overall, the Mach 1 Pigman Edition achieves a RateAGun Score of 9.2. While this is low – good! – for such a powerful hunting air rifle, it still means that experience is required to shoot it well.

Synthetic moldings form the majority of the external surfaces of the Gamo Mach 1 Pigman Edition air rifle. The moldings for both the buttstock and barrel/silencer assembly are well finished and give a high quality feel. Mold seams are a little prominent – particularly on the barrel/silencer – but this did not offend the HAM review team.

The buttstock is covered with a stippled finish that provides good grip and is practical for use in the field when the gun may become wet and/or slippery in use.

Bluing of the compression cylinder is of average quality. It’s perfectly acceptable, but does not have the apparent “depth” found on some other air rifles.

As a new model, the Gamo Mach 1 Pigman Edition air rifle is not yet widely available. But this will likely change over time and, anyhow, there’s already a number of online retailers selling this model.

As with most Gamo air rifles, the Mach 1 Pigman Edition air rifle would benefit from sling swivels to aid carrying in the field. However its light weight makes it less tiring to carry for extended periods than many other break barrel air rifles of comparable power.

Note that – as with all Gamo air rifles – you will need metric star wrenches if you plan to tighten the stock or scope mount screws. Standard hex wrenches do not fit.

Gamo has spare parts available to provide long-term support for the Gamo Mach 1 Pigman Edition air rifle. But Gamo parts are not readily available from a range of vendors as are those for – say – Crosman models.

The owner’s manual gives instructions in English, French and Spanish. It provides basic information on adjusting the CAT trigger, without giving specifics that might enable the owner to make informed judgements on how best to set the trigger for his/her needs. 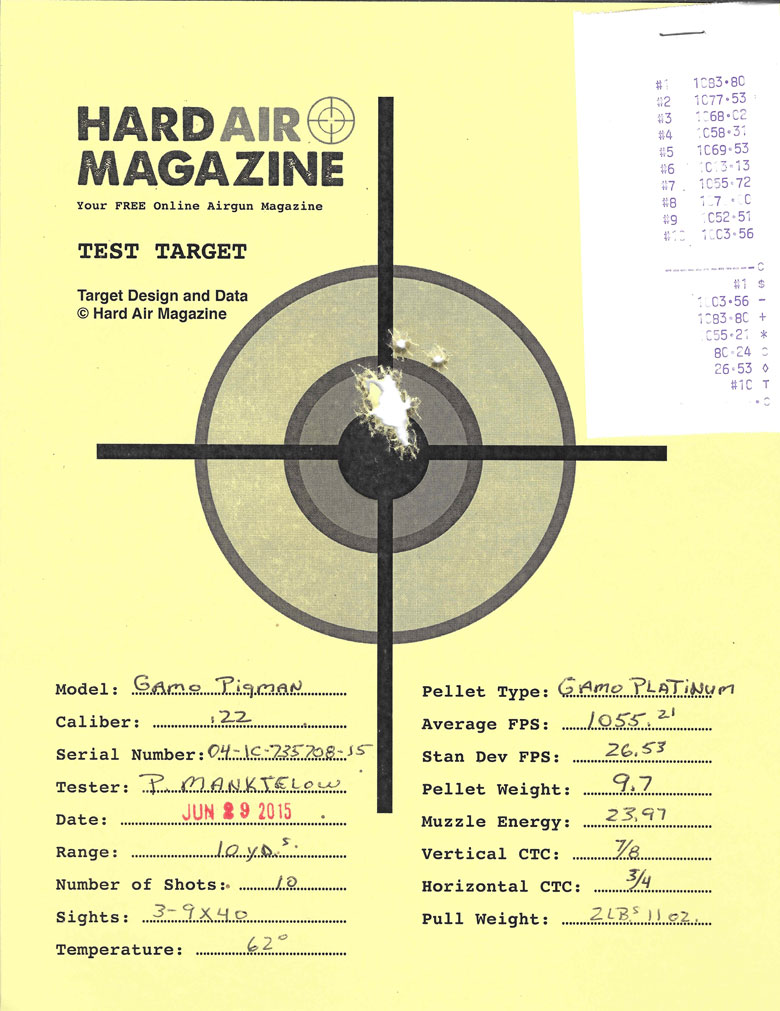 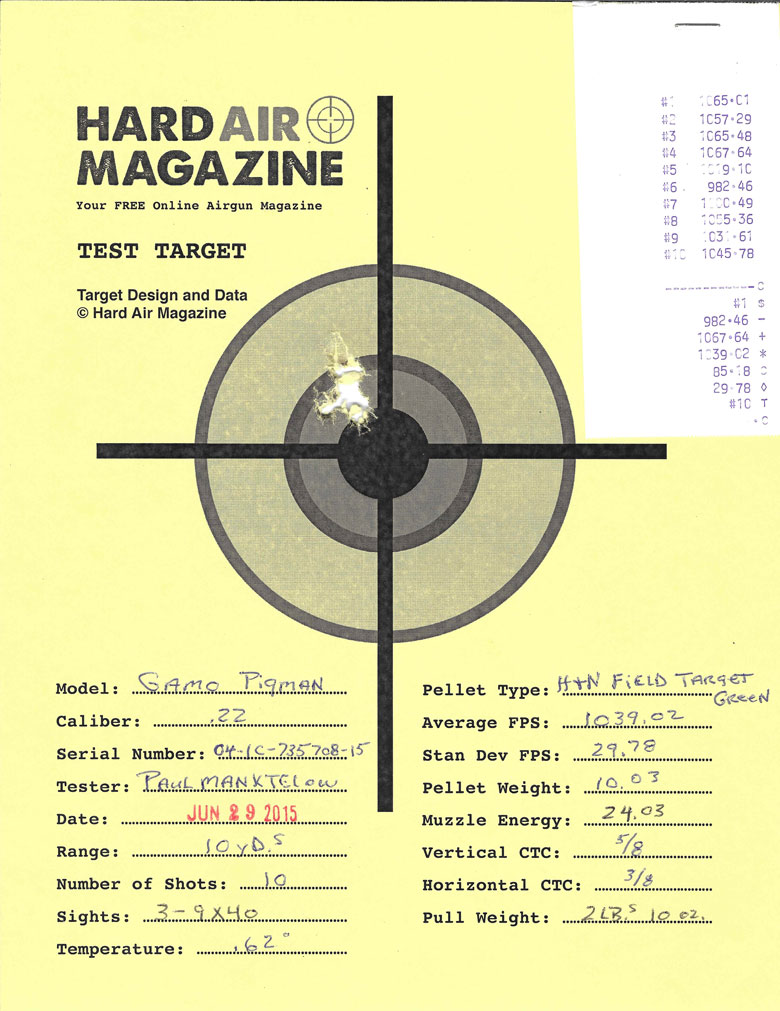 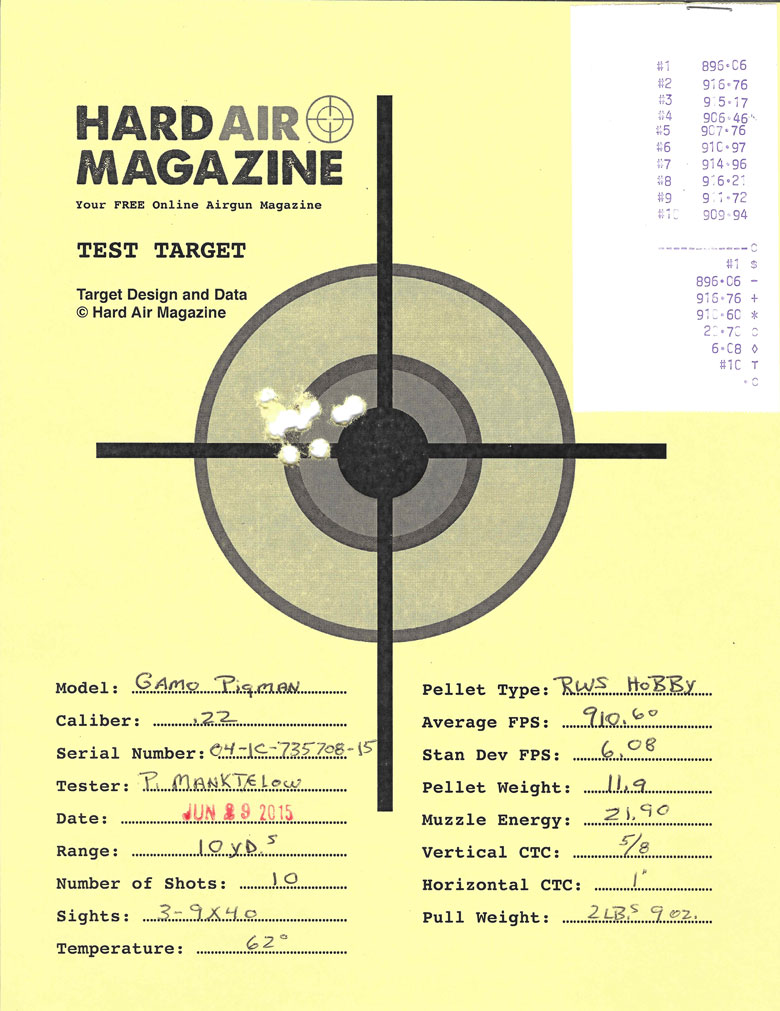 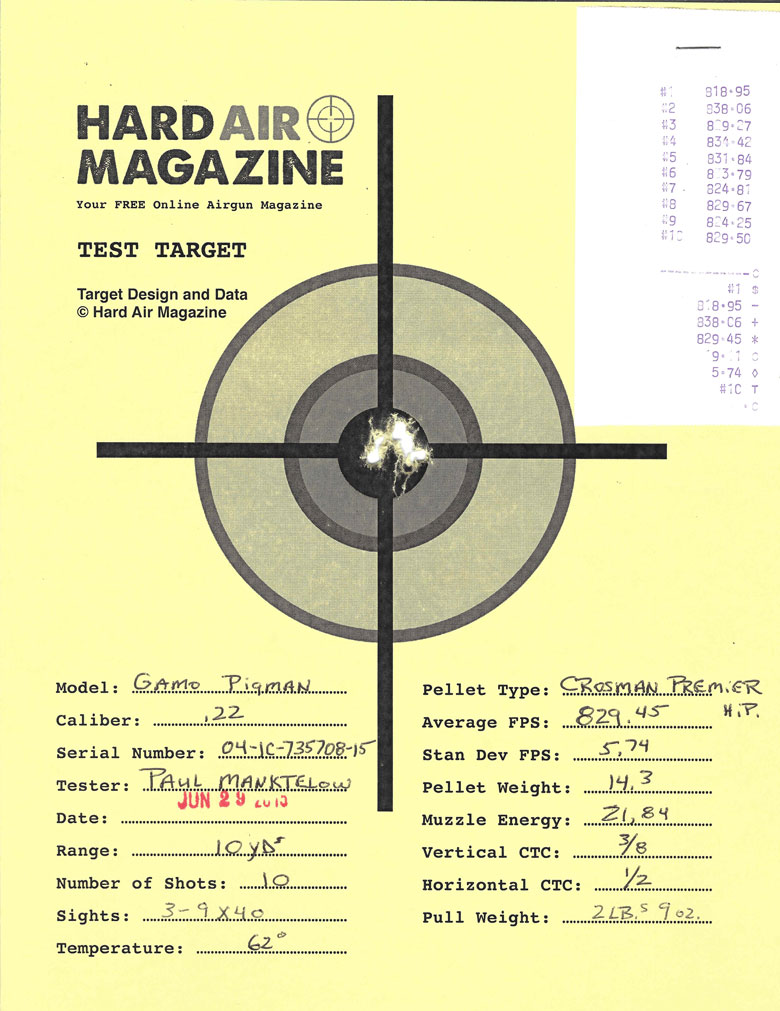 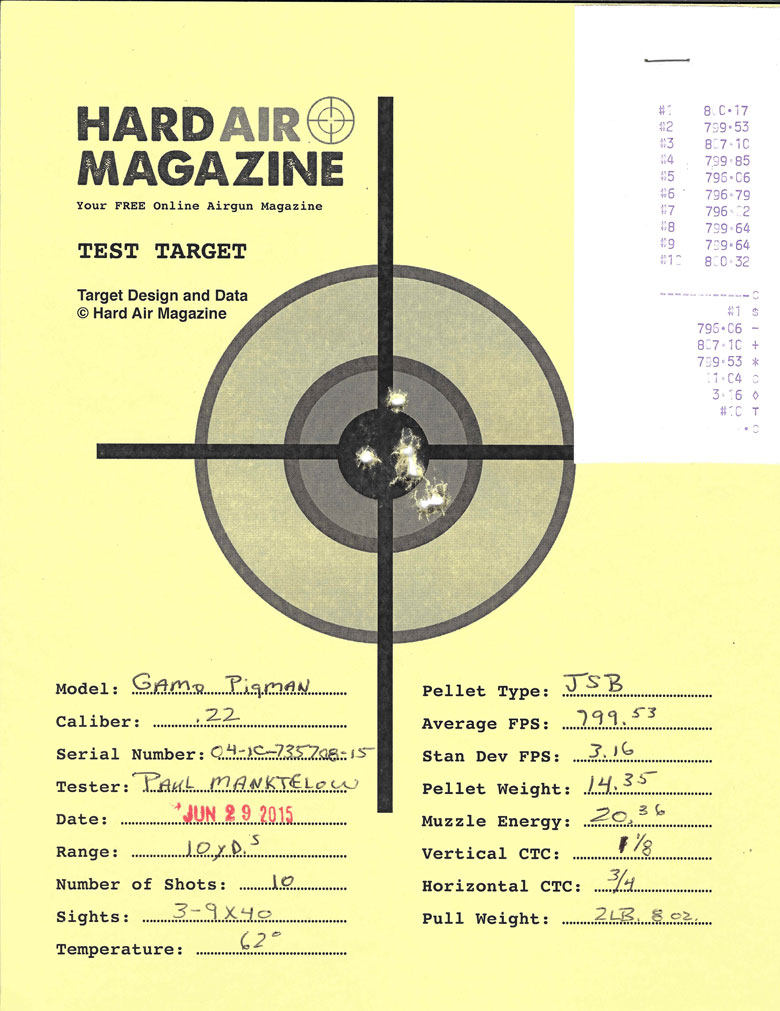 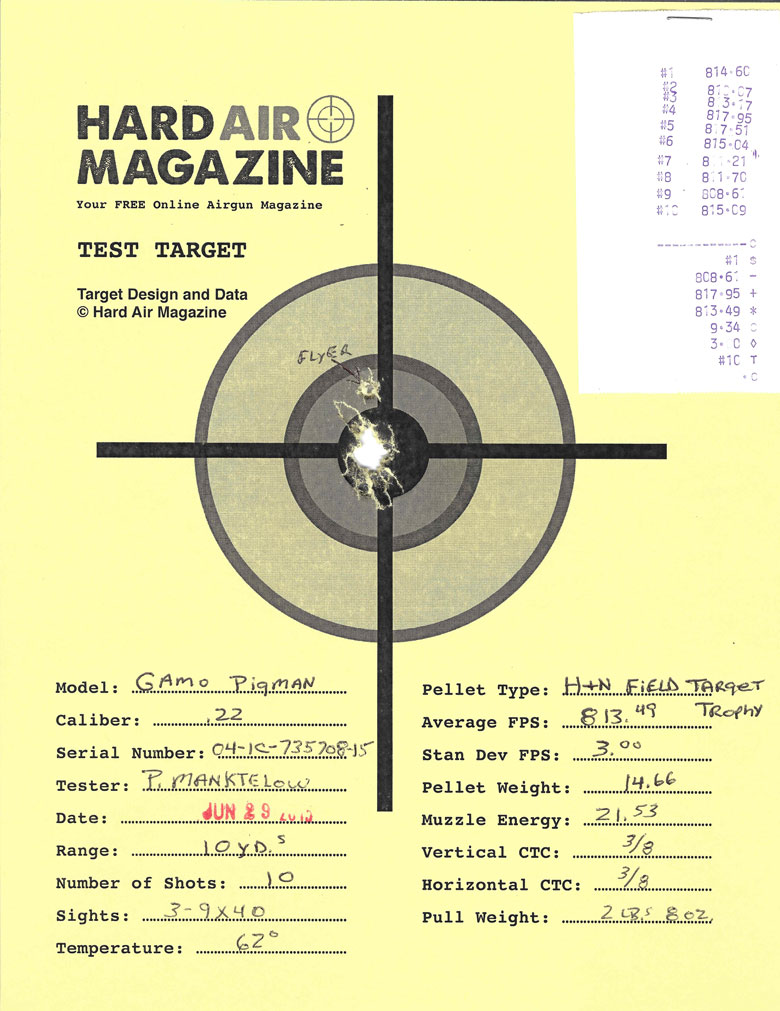 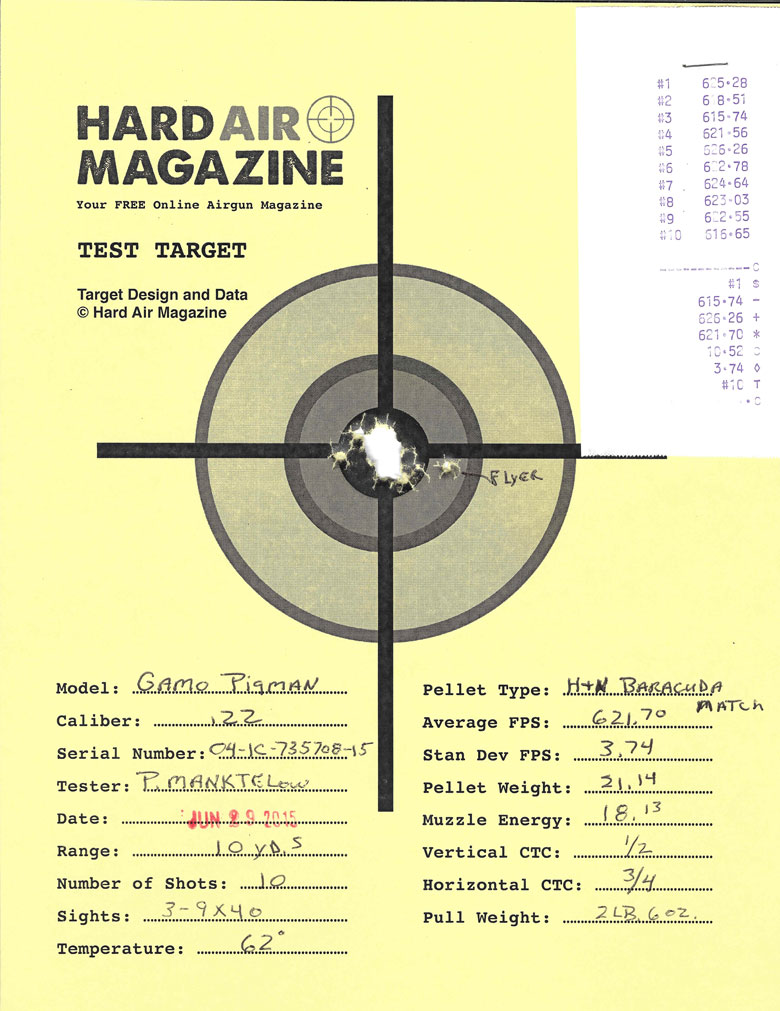