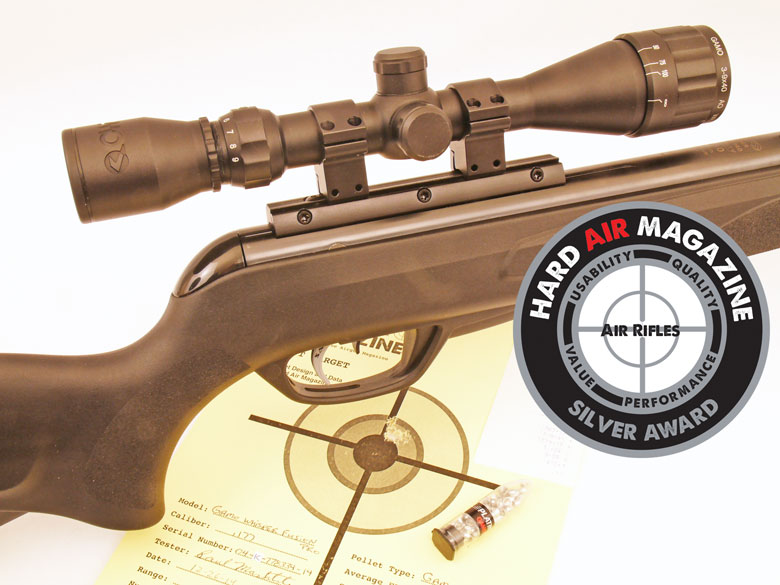 No mildots on scope reticle.
Really not much else for the price.

The Gamo Whisper Fusion Pro is accurate, consistent and very tolerant of a wide variety of pellets. It has a good trigger and a decent bundled scope.

At the Street Price of $260 it represents a good value, particularly for use as a hunting air rifle.

Don't look to this gun as a plinker, or if you're not already experienced with spring/piston air rifles. But if you have the ability to shoot it correctly, the Whisper Fusion Pro will give excellent performance.

77%
HAM Rating
You have rated this
Full Review

At a Street Price of $260, the Gamo Whisper Fusion Pro has competition from Hatsan, Benjamin and the lower end of the RWS/Diana 34 range.

This is not a particularly cut throat segment of the market – as it is around $200, for example – but the Whisper Fusion Pro acquits itself creditably with its combination of specifications, performance and good bundled scope.

As you can see, the Gamo Whisper Fusion Pro tested by HAM gave excellent accuracy with a wide range of pellets. All of the targets shot by HAM Tester Paul Manktelow gave good groups – even with lightweight lead-free pellets that often perform poorly in other air rifles.

The best group – just! – was made with H&N Field Target Trophy pellets. But it was a close call. See the test targets lower down this review.

This means that you can actually use the Whisper Fusion Pro with ultra-light pellets such as the Gamo Raptor 4.7 grain pellets and achieve good accuracy with maximum muzzle velocity. That’s not a common combination with many of the air rifles tested to date by HAM.

And talking of maximum muzzle velocity, the Gamo Whisper Fusion Pro tested by HAM peaked at 1379.77 FPS! That’s close enough to the 1400 FPS claim made by the manufacturer for this air rifle.

The Whisper Fusion Pro is equipped with Gamo’s SAT trigger (Smooth Action Trigger). This trigger averaged a pull weight of 3 lbs 6oz in the HAM tests. Paul Manktelow noted that “the trigger is real nice for a hunting rifle. It breaks clean – just like an old-fashioned light switch!”

The SAT trigger has a two-stage action. The first stage is long and light, there’s no doubt when you’ve reached the second stage. Combined with a manual safety that’s conveniently located just ahead of the trigger blade, HAM finds this to be a good trigger for a spring/piston air rifle of this price and power.

Cocking felt quite smooth, with no untoward scraping noises. HAM measured a cocking effort of 56 Lbs, which surprised us. It didn’t seem that heavy to cock, when compared to the muzzle velocity and power the Whisper Fusion Pro produces. 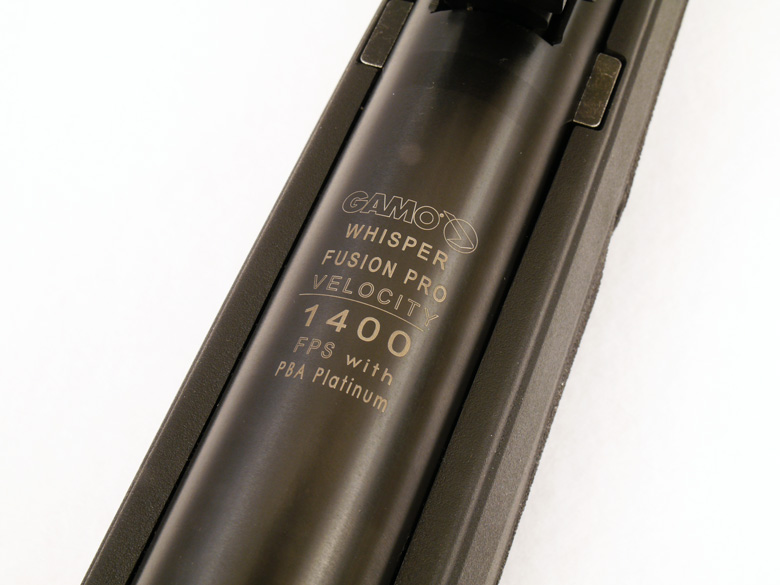 This great performance was a little marred by the cocking effort. HAM tested the Whisper Fusion Pro to have a cocking effort of 56 Lbs, well above the claim of 41 Lbs. But as we said above, it certainly felt lighter than that.

HAM does not have sophisticated sound measuring equipment (yet!), so we can’t give numbers for noise level. Subjectively the HAM test team agreed that the Gamo Whisper Fusion Pro is fairly quiet for an air rifle of this power. But is it really 89.5% quieter, as claimed by Gamo? And quieter than what? There we’re struggling to go along with the manufacturer’s claim.

The Standard Deviation (a variability measurement) for muzzle velocity) was very well controlled, with an average across the whole test of 6.72 FPS. This is very consistent muzzle velocity for any spring/piston air rifle. While Standard Deviation dropped down to as low as 4 FPS with JSB Exacts, more notable numbers were achieved with ultra light weight alloy pellets.

Standard Deviations of around 9 FPS for the Gamo Raptor Platinum and H&N Field Target Trophy Green pellets are extremely low and a credit to the Gamo Whisper Fusion Pro.

This level of consistency was continued with the excellent accuracy obtained with all the standard suite of HAM test pellets. The Whisper Fusion Pro is not pellet picky.

The Gamo SAT trigger also turned-in good consistency of pull weight, varying only between 3 Lbs 2 Oz and 3 Lbs 15 Oz, around the average of 3 Lb 6 Oz achieved in HAM’s tests. HAM Tester Paul Manktelow remarked that “the trigger is very consistent: it breaks cleanly every time”.

We struggle with this. the Gamo Whisper Fusion Pro is maybe, just maybe, a little quieter than we expected. It’s fairly quiet for an air rifle of this power – except, of course, when shooting ultra-light pellets that break the Sound Barrier and crack like a 22LR.

The open sights are very adequate and the fiber optic elements are finer than most. The front sight is well protected by a sprung steel cover. So, if you use open sights, you’ll be happy with this air rifle.

The best news is that the Gamo Whisper Fusion Pro is supplied with a very decent bundled scope. The Gamo-branded 3-9 x 40AO scope focuses down to 10 yards and has good optical quality for a bundled scope. It’s pretty sharp and clear. If it just had a mil dot reticle, it would be close to perfect for this gun.

But remember to lower the scope stop pin before mounting the scope on the Gamo Whisper Fusion Pro. Yes, the instructions do tell you to do this, but how many people read them? If you don’t the scope will move back along the rail and this will cause vertical stringing on the target. 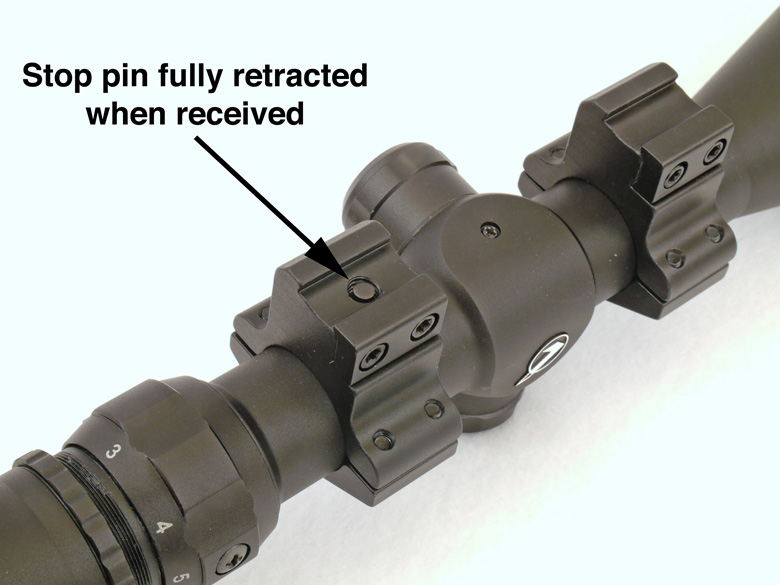 As it is, most Gamo Whisper Fusion Pro owners will be very happy with this scope and will not need to look for a replacement any time soon.

The scope rings are up to the job, too and no scope movement was recorded during HAM’s tests.

The Gamo Whisper Fusion Pro is a long air rifle. At 46 1/2-inches overall, it’s tall enough to not fit into some gun cabinets. And this length means that it’s not easy to swing around rapidly – although that could be considered a good safety feature.

HAM likes the effective manual safety and – unlike some break barrel air rifles – all the HAM test pellets fed easily, yet correctly, into the rear of the barrel when loading. No indented thumbs from loading here!

The light weight of 7 Lb 14 Oz (all up with the mounted scope) also contributes to the Gamo Whisper Fusion Pro having good shootability.

On the down side, HAM testers found that the scope was positioned just a little too high for a good cheek weld. That negatively impacts consistent accuracy, although it didn’t seen to stop Paul Manktelow from obtaining great results. This would be easy to fix by mounting a lower set of (medium height) rings than the high rings bundled with the Whisper Fusion Pro.

Alternatively, removing the clamp-on scope rail would achieve a similar effect. Why DOES Gamo fit this clamp-on scope rail to some models when they have another set of perfectly-adequate scope dovetails machined in the compression tube? There’s a question to be asked of Gamo’s Product Management team. 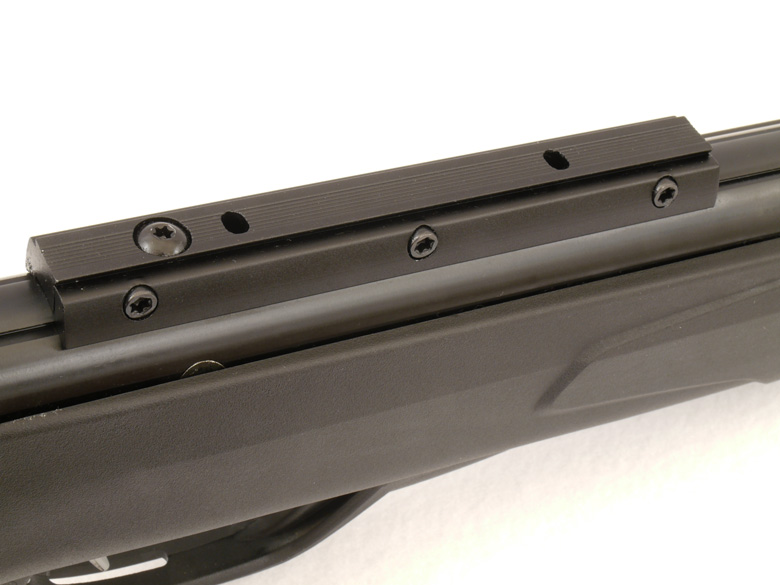 Overall, shootability is good for this type of air rifle. But remember to use the loose “Artillery Hold” for best results. The Gamo Whisper Fusion Pro could still be a handful for a newcomer to spring/piston airguns and so it has a relatively low RateAGun score of 9.0 for such a high powered spring/piston air rifle, meaning that it just sneaks into the category of being “An Enjoyable Challenge” to shoot.

Finish and appearance of the Gamo Whisper Fusion Pro are “on par” with other air rifles in this price range – at least in the HAM team’s opinion.

The stock is pleasantly curved on most surfaces and has a practical stippling around the wrist and forend.

The molding seams on synthetic parts are smooth and the bluing of metal parts is to expected standards.

HAM has no complaints with the appearance and finish, but there’s nothing really exciting here either.

The Gamo Whisper Fusion Pro is very easy to buy. It’s widely available from Internet retailers and some “bricks and mortar” stores will carry it also.

Spare parts for Gamo air rifles are not generally available from Gamo, except as part of a repair undertaken by the company. This being in strong contrast to the approach taken by Crosman and Umarex – for example – which make spares for many models readily available.

Liability issues are probably behind Gamo’s approach to the non-provision of spare parts, but this does not help the knowledgeable owner who aims to keep his (or her) gun in use over many years. 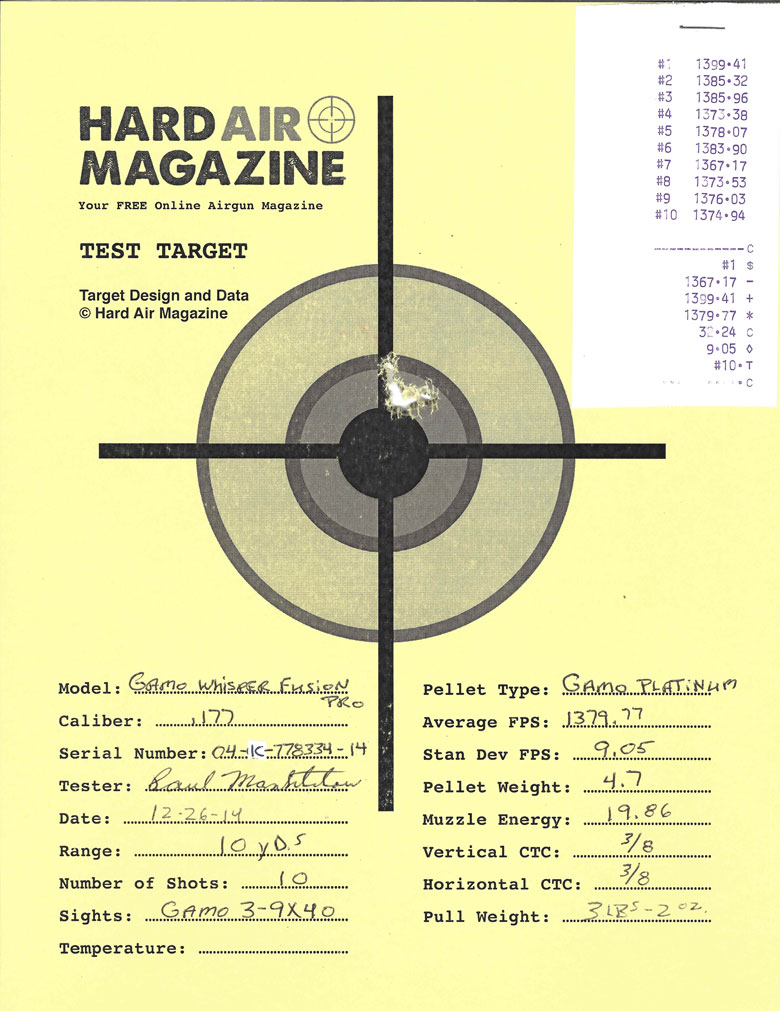 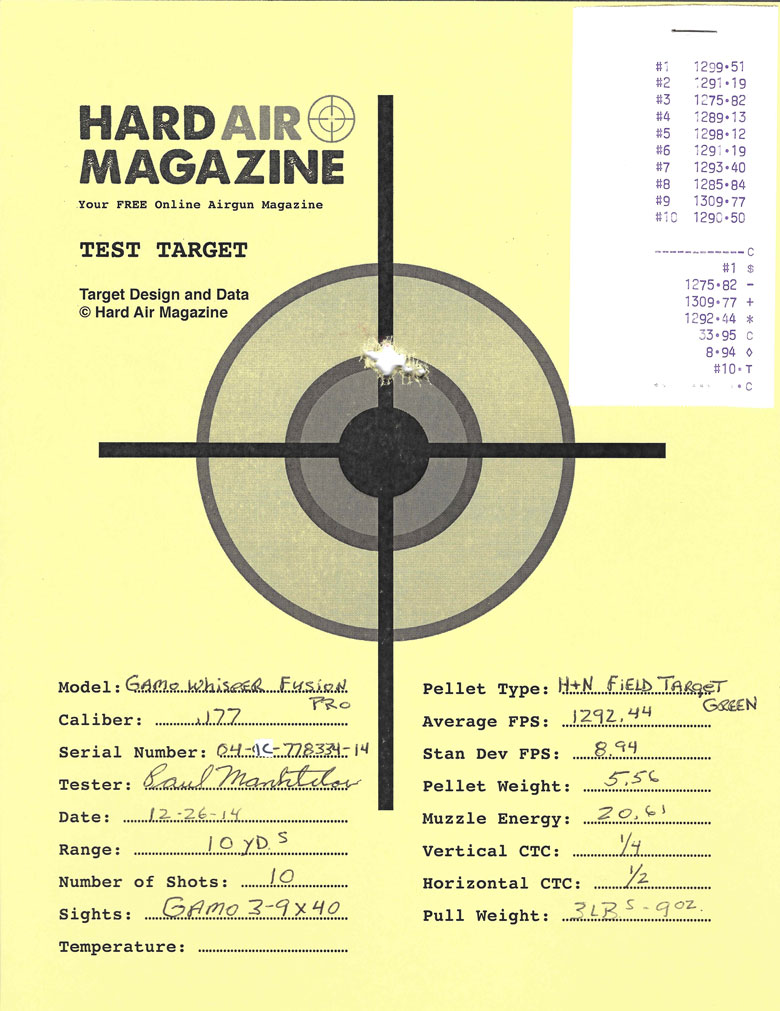 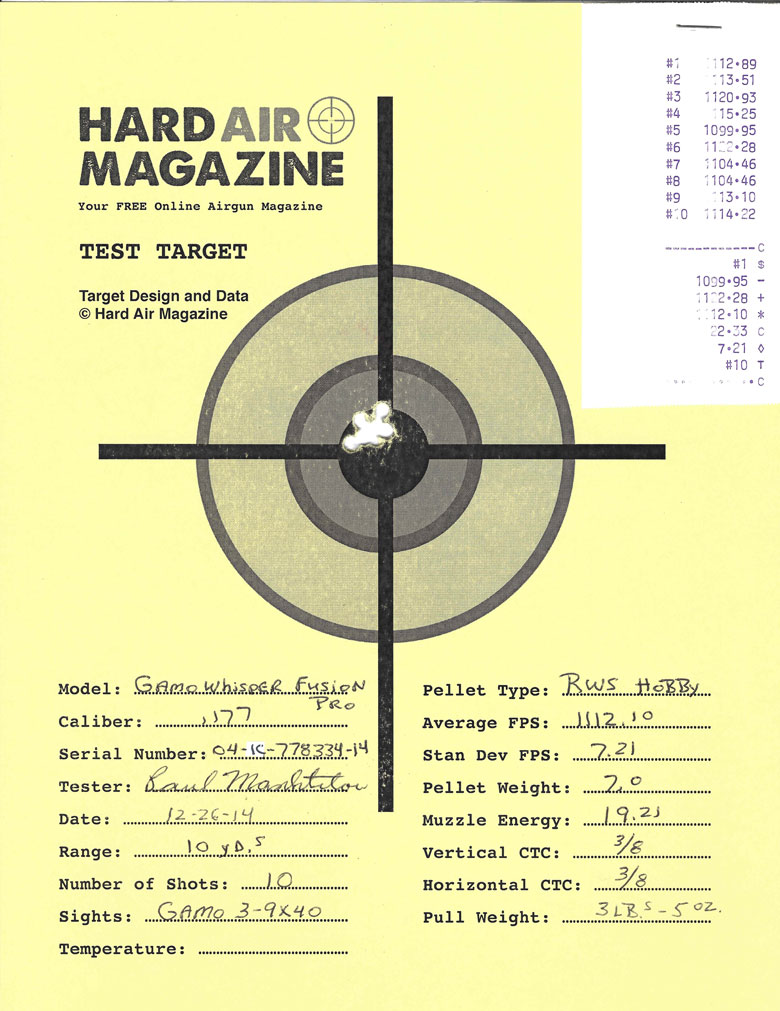 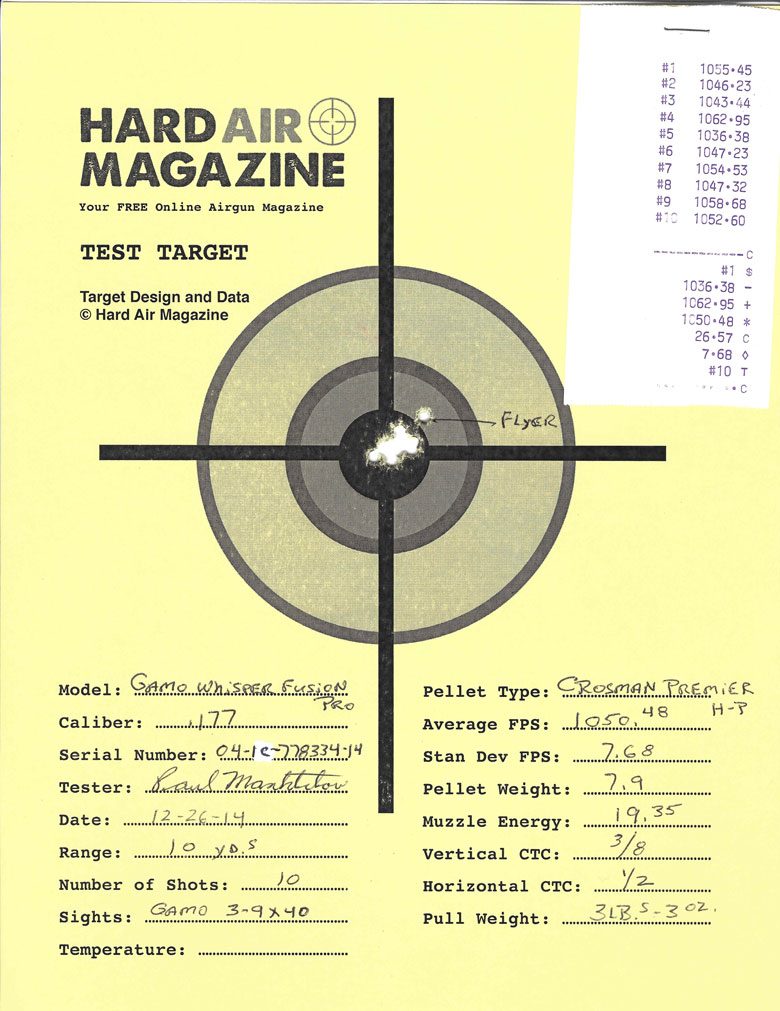 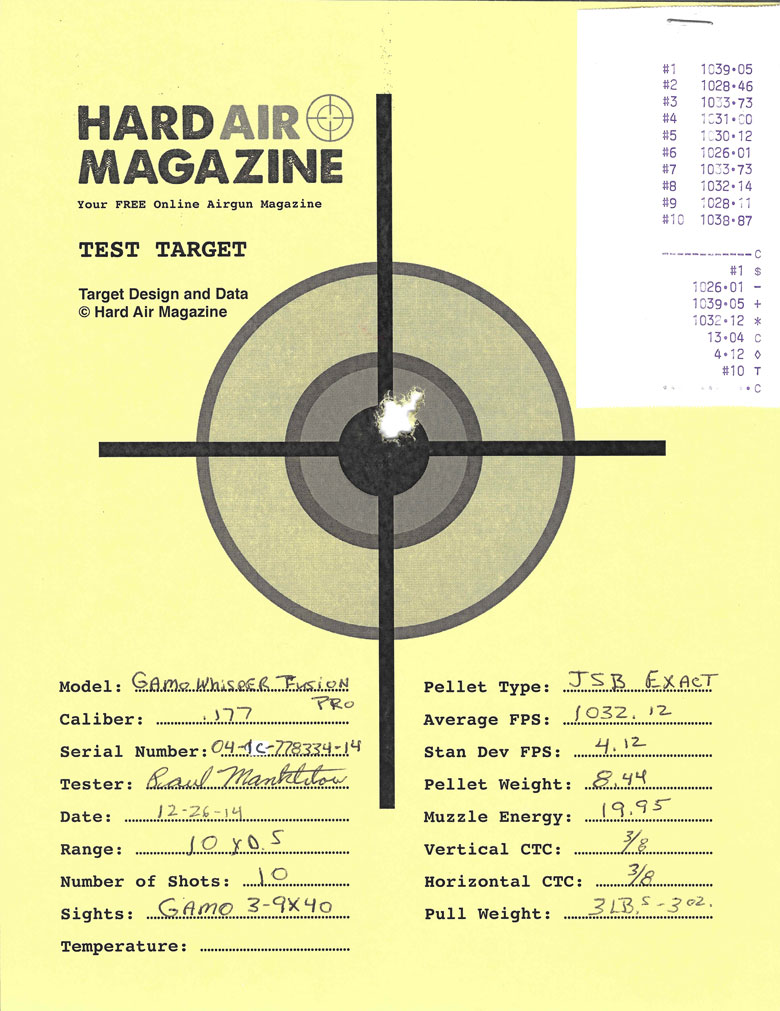 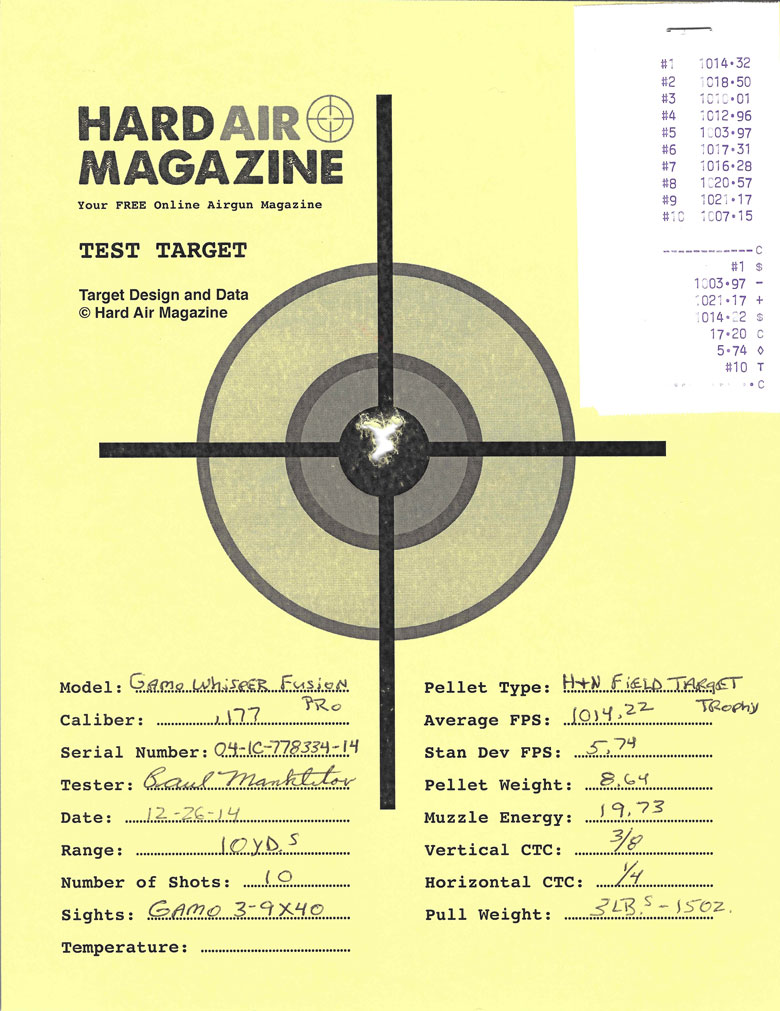 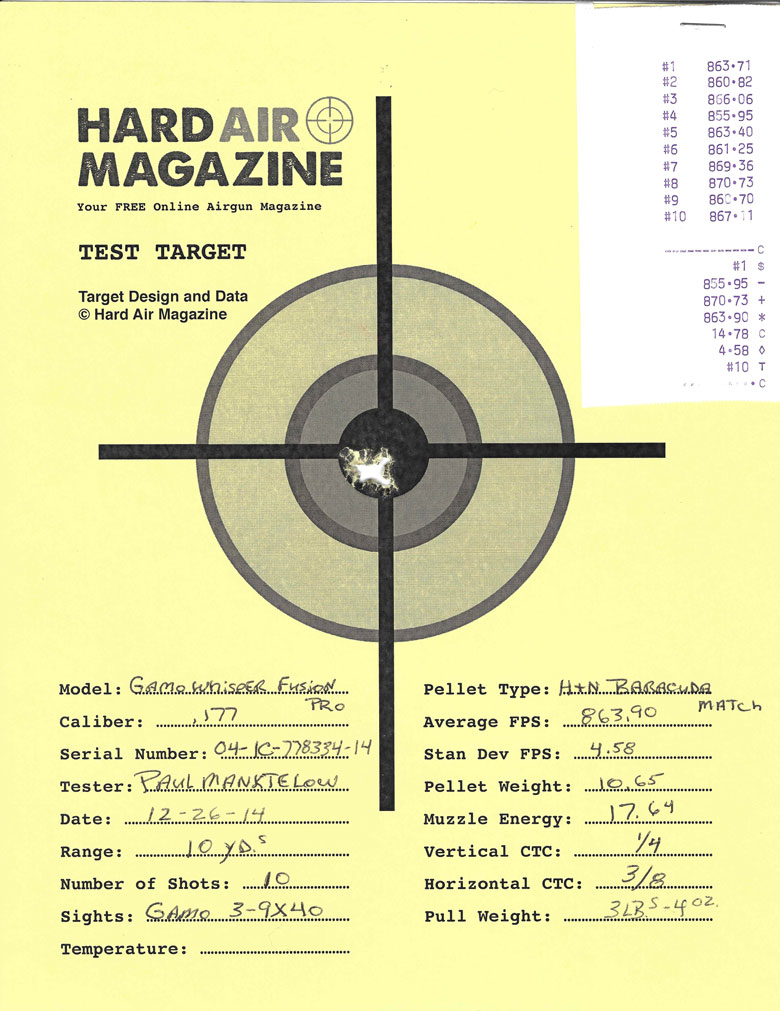