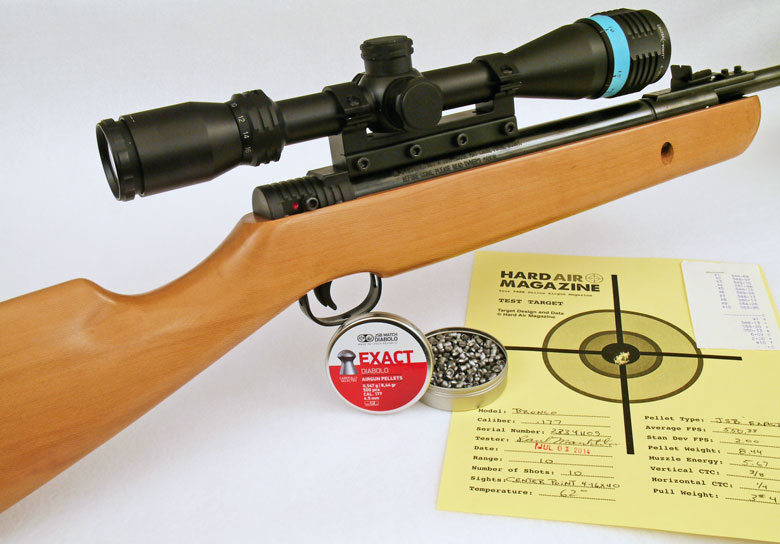 The Air Venturi Bronco air rifle is the ultimate easy shooting break barrel airgun, as confirmed by it's RareAGun score of just 5.4 - that's incredibly low for a spring/piston air rifle.

It's great for plinking and family shooting. The easy cocking, good trigger and compact size are keys to this. Our example shot accurately with most of HAM's standard test pellets. Fit a scope to take advantage of this gun: preferably a small-ish, light 4x scope that compliments the compact design.

This is not a powerhouse in the FPS department - it was not intended to be. But most of the Bronco's benefits are BECAUSE it's not a fast shooting air rifle! 1,000FPS is not required for plinking and having fun for most families. For close range plinking - 10 to 20 yards - the Bronco is tough to beat at any price.

This is not an air rifle for hunting. The low muzzle energy means that you're very unlikely to make a humane one-shot kill on even the smallest critter. Don't make them suffer, choose a more powerful airgun if you want to hunt anything living.

70%
HAM Rating
You have rated this
SUMMARY

The Air Venturi Bronco air rifle is not really expensive at $129.95, but there are MANY more powerful break barrel air rifles at this price or less, and including a scope. But power is not what the Bronco is intended for!

Overall, the price is a little high, but the Bronco is a fairly limited production air rifle and that is some justification. Don’t forget to allow more money for a scope. If you want to shoot with open sights, the Bronco Target Pro is a better bet, but costs $30 more.

The Air Venturi Bronco isn’t intended to be a high power air rifle. And it’s not! As you can see, typical muzzle velocities with lead pellets are in the 500+ FPS range. This makes it an ideal air rifle to shoot in a basement or garage range if the weather doesn’t tempt you outside for shooting.

This Bronco is very pellet tolerant. It shot accurately with most of the standard HAM test pellets, but obviously took a strong dislike to the Crosman Premier HP pellets. The H&N Baracuda Match pellets are obviously too heavy for the Bronco. Stick to lighter weight pellets with this air rifle.

The Bronco’s trigger is unusual. There’s actually two trigger blades side by side. When you pull the triggers (!), the first stage trigger is naturally pulled first, then the second stage is naturally released to fire the air rifle. Don’t think about it too much, it’s actually very simple and natural. 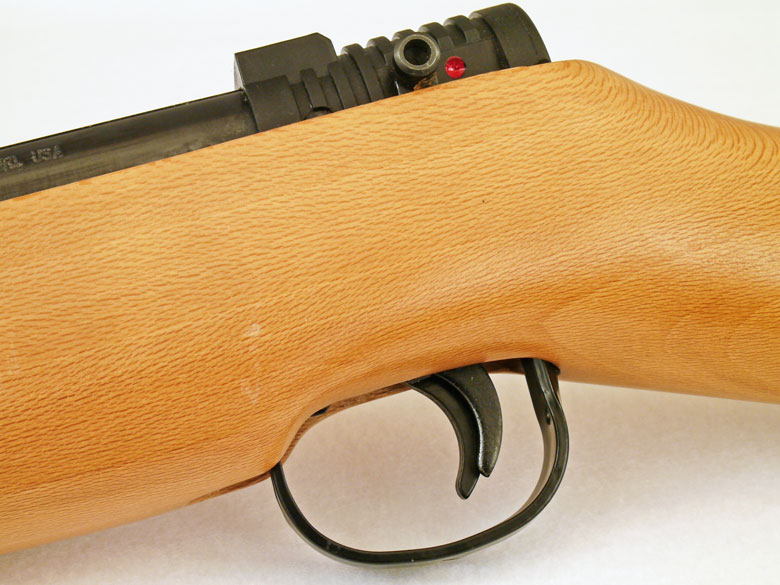 Trigger pull weight averaged around the 3lb mark. It felt light and comfortable with a predictable let-off. This trigger is waaaaay better than is found on most break barrel air rifles in this price range.

Cocking is easy, with a measured cocking effort of about 20 lbs. There are very few break barrel air rifles that are easier to cock than the Air Venturi Bronco.

600 FPS is the claim for the Air Venturi Bronco shooting alloy pellets. Our test gave a maximum of 708 FPS with the Gamo Raptor Platinum pellets – that’s about 18% above Air Venturi’s claim.

More claims for the Bronco are that it’s accurate, easy to cock and suitable for all day shooting. Does HAM agree? Yip!

Air Venturi’s claims for the Bronco are met or exceeded by the sample HAM tested.

The Standard Deviation – shot to shot difference in muzzle velocity – for the Bronco gave a 5 – 6 FPS spread for most pellets. This is good consistency. This jumped to the outstanding figure of 2 FPS when using JSB pellets.

Interestingly, the pellets having the best and worst Standard Deviations – 2FPS for JSBs and nearly 25 FPS for the Gamo Raptor Platinum pellets – both gave excellent accuracy! Duhhh…

We can also see that accuracy was pretty consistent with 6 out of the 7 HAM standard test pellets. All shot well, with the obvious exception of the Crosman Premier Hollow Points.

As you would expect with such limited power, the Bronco is a quiet air rifle. It’s not Marauder quiet, but it’s certainly very quiet for a non-silenced gun. And there’s no twang from the spring when firing.

The Bronco is fitted with iron sights but they’re not a strong point of the gun. It’s good that the front sight has a hood, although being metal and well set back from the end of the muzzle brake, it needs this less than many air rifles with plastic front sights set right forward.

There’s no fiber optics on the iron sights and the rear sight has a primitive step elevation system using a notched ramp. Windage adjustment for the rear sight is obtained by loosening two screws and guesstimating a new position. Let’s be clear, if you really want to use iron sights with the Bronco, pay the extra and choose the Target Pro model – this is fitted with a micrometer (non click adjustable) rear peep sight that will make it easier to exploit the gun’s inherent accuracy. Although we’d still prefer a peep sight that’s click adjustable for elevation and windage – there’s just no pleasing some people!

Standard airgun scope rails are machined into the top of the Bronco’s compression tube. We mounted a scope for our tests and guess many Bronco shooters will do the same. In fact we were surprised that the Bronco was able to accept the 14 3/4-inch long 4-16 x 40AO Center Point scope we used. That scope is nearly 6 inches longer than the Bronco’s barrel yet it still fitted on the gun!

As Paul – the HAM tester – said, “You really can shoot the Bronco all day.” That’s unusual for any break barrel airgun and is a result of the gun’s carbine-like length, easy cocking, light weight and easy recoil. So it’s ideal for family plinking as it can be shot by folk of smaller stature (kids, many girls and Moms) as well as average size men. It’s a great family air rifle!

The Bronco achieves an outstanding RateaGun score of just 5.4, very low for any spring/piston air rifle. This means that it’s good shooting fun and easy to shoot well.

Bluing is strong, even and good on the metal parts of the Bronco. Wood finish is good too and the rubber buttpad is nice.

So finish is good: Paul “would have been proud to own this gun as a kid”.

We don’t like the color of the wood, but that’s a subjective opinion and – if you were really that concerned – it could always be changed by a refinishing project.

The Air Venturi Bronco is sold online by Pyramyd Air and a number of other dealers, but you won’t find it in your local sporting goods store.

We don’t like the automatic safety – we don’t like it on any gun – but it’s common on most air rifles and we all have to live with it as it’s undoubtedly there mainly for liability reasons.

One major disappointment with the Bronco is the Owner’s Manual. Of its 8 pages, 6 contain completely generic material. Only 2 pages are Bronco-specific and there’s no mention at all of the very unusual dual trigger blades. Yes, this is a simple air rifle, but the Bronco deserves better. 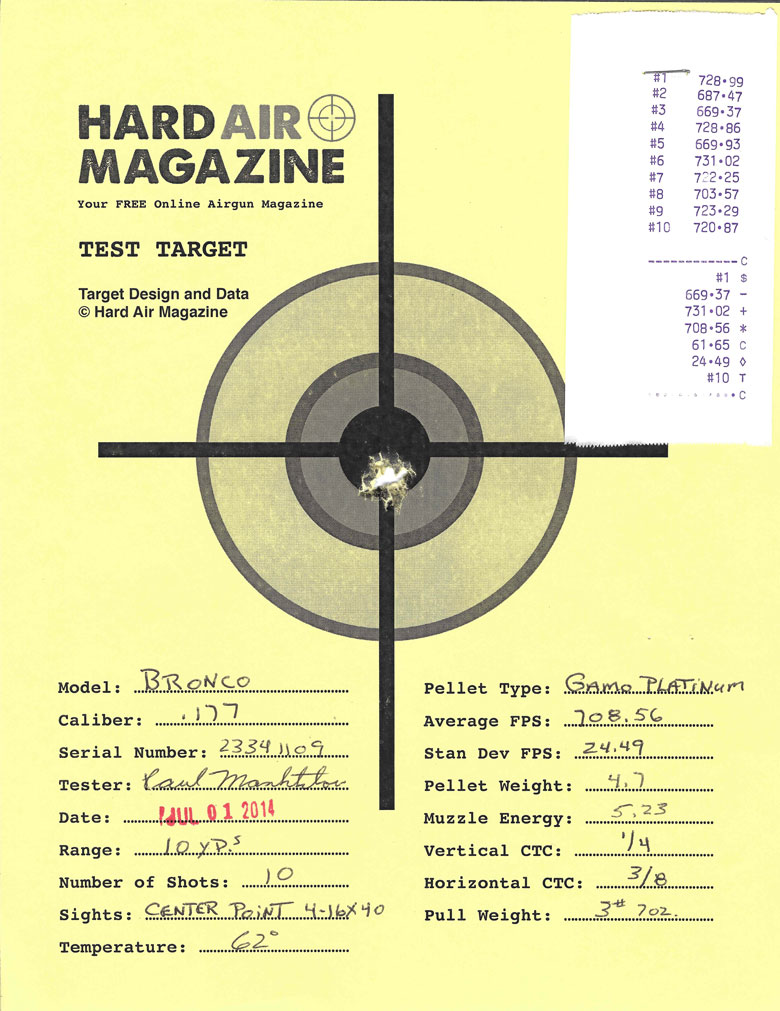 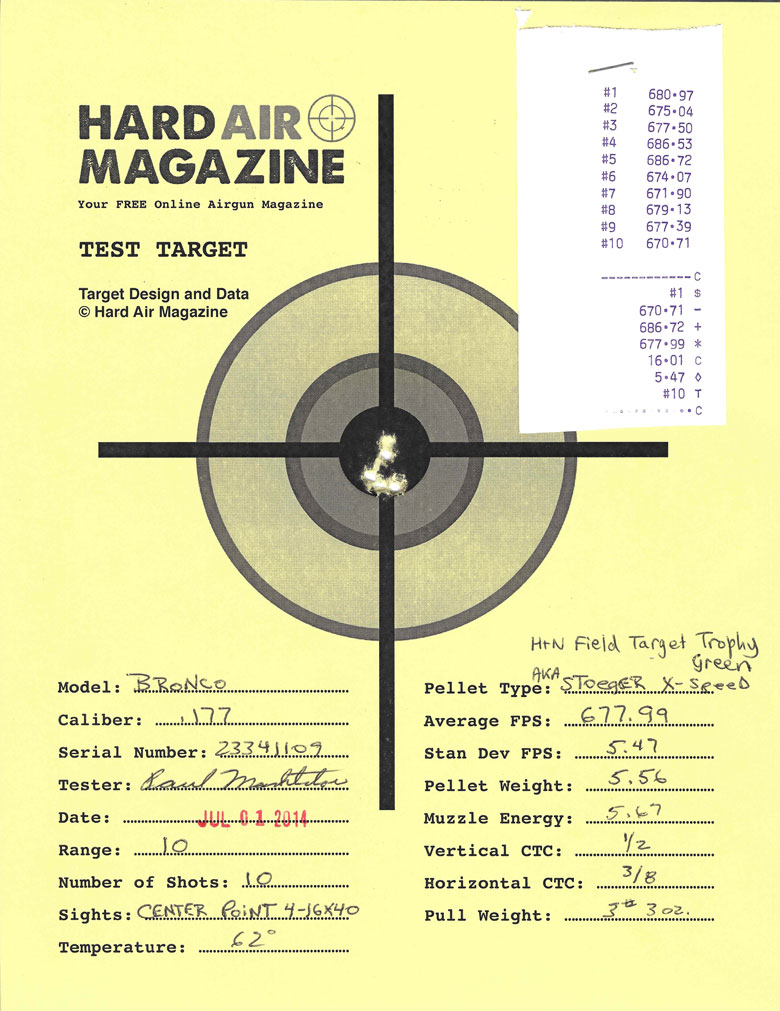 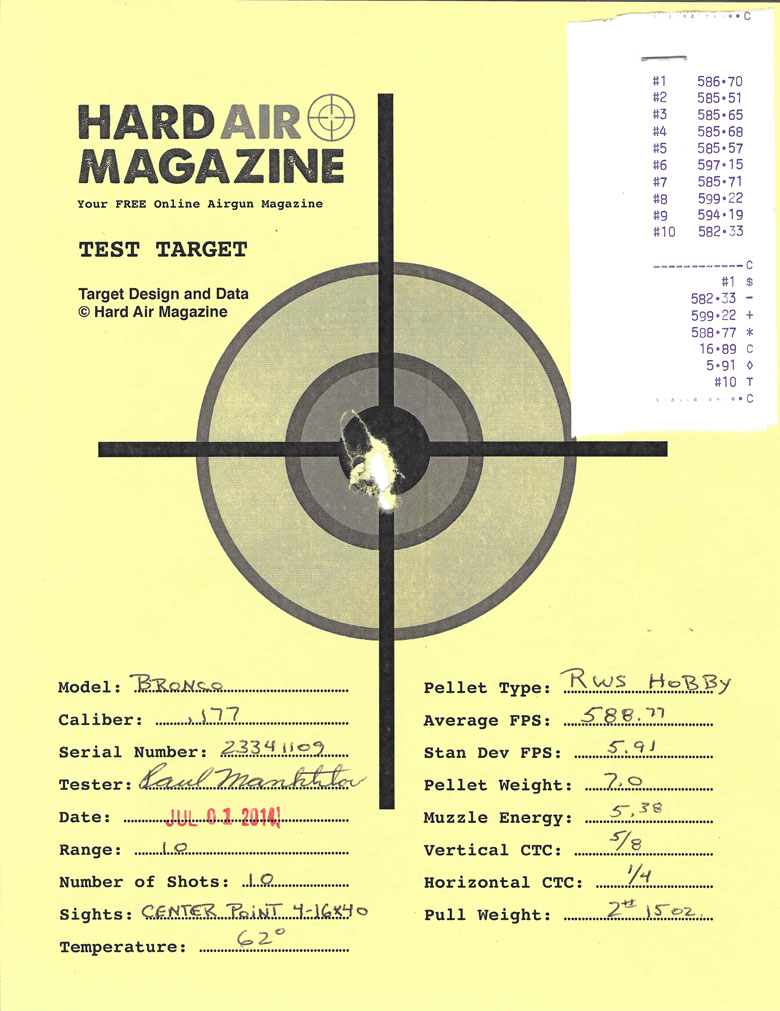 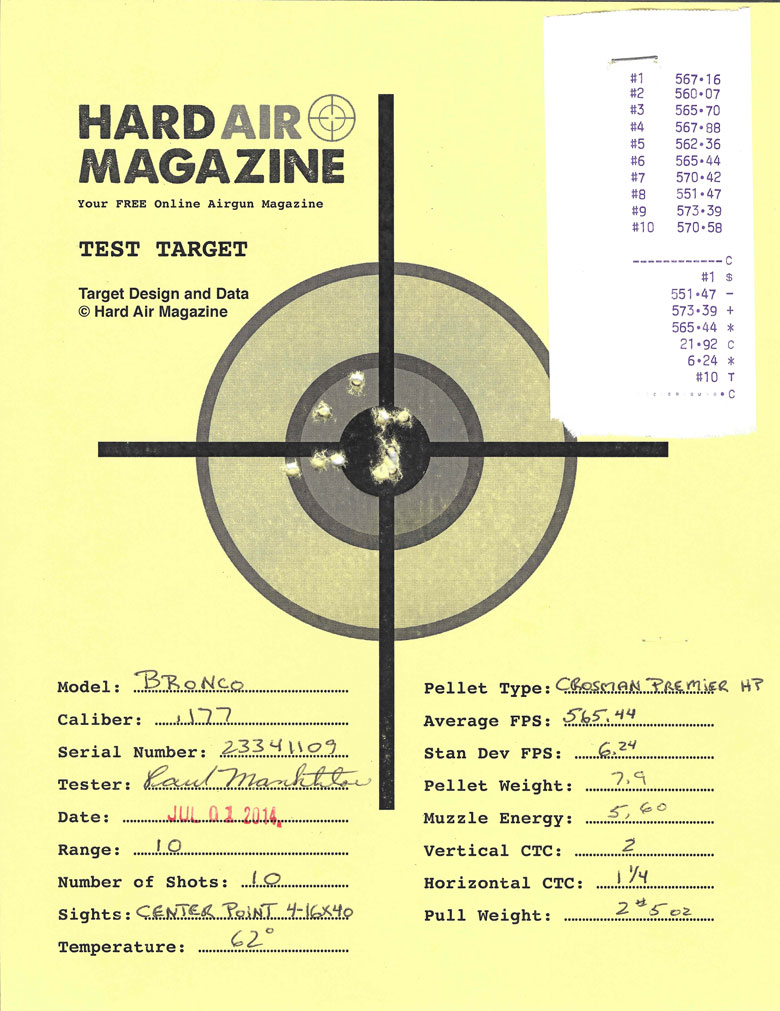 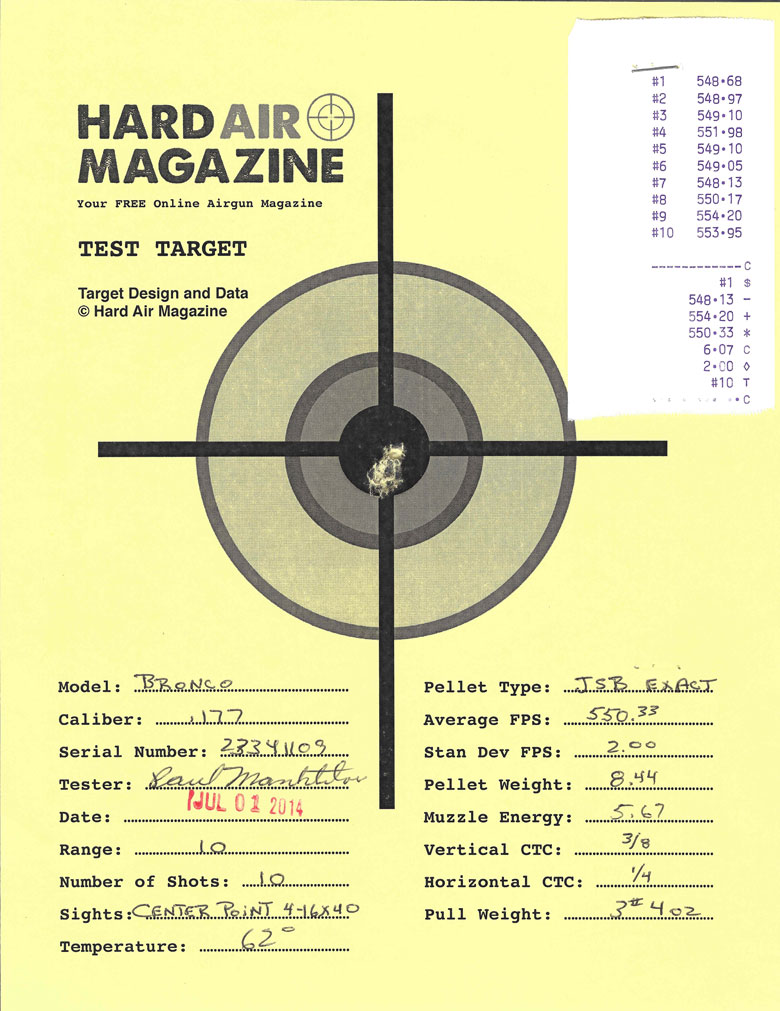 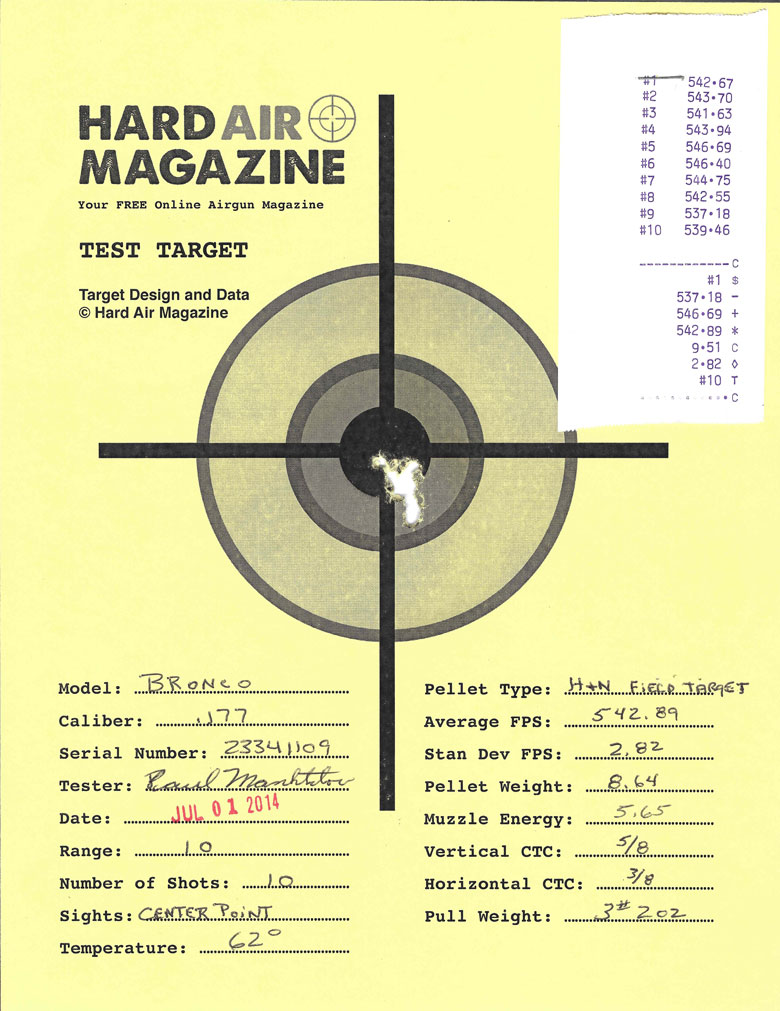 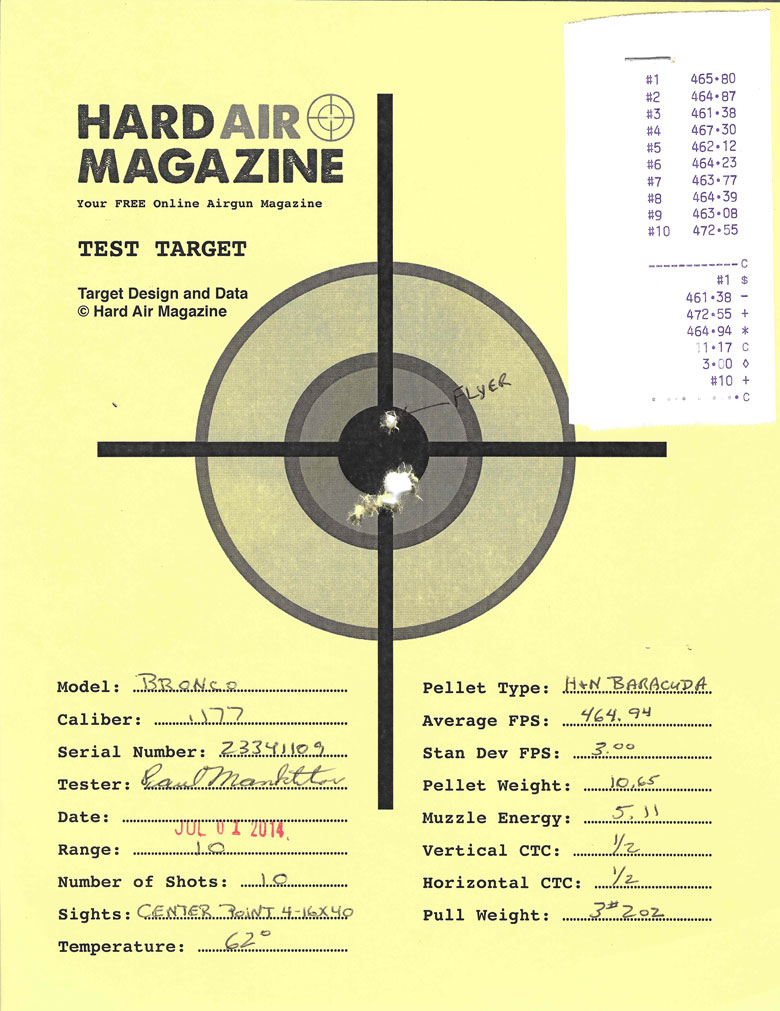