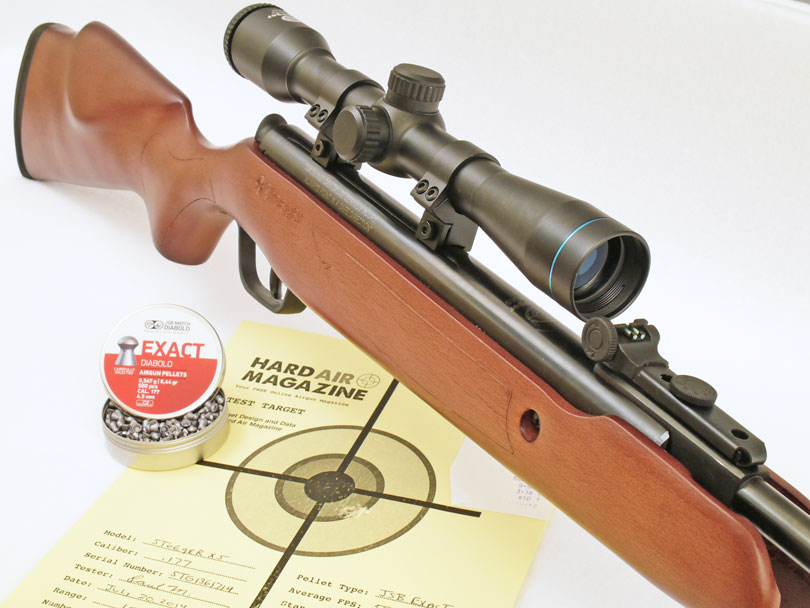 The Stoeger X5 air rifle has many good features. It's easy to cock, the trigger is quite good, it comes bundled with a mounted scope and it can be accurate with the right pellets. Like all Stoeger airguns, it carries the best warranty in the business, with 2 years support from Benelli USA.

And it's fairly easy to shoot with a RateAGun score of 7.5. That's good for a spring/piston air rifle and far better than most.

So why is the HAM score relatively low at 62%?

Unfortunately the X5 suffers from a scope that is incorrectly mounted and not well sighted-in, negating what should be a key benefit of this gun. It also displayed a tendency towards vertical stringing (inaccuracy) with some pellets and this means that the average user may be disappointed until they find the pellets their X5 "likes".

Critically for some, the muzzle velocity falls well short of the magic 1000 fps. Yet it's not quite low enough so that anyone can shoot it without any knowledge of the "Artillery Hold". And it's relatively expensive for the specs on offer, although this is probably justified by the build quality and great warranty.

If the scope mounting and sighting issues were fixed, we would have no hesitation in giving the Stoeger X5 air rifle a higher HAM rating. If you're prepared to do this yourself and want a quality plinker, the X5 is worth considering.

62%
HAM Rating
You have rated this
SUMMARY

So, his is a tough one. It will depend very much on what’s important to each individual. If muzzle velocity and price are your prime buying considerations, the X5’s not really in the running.

However, if a long, hassle-free warranty and the perception of a quality product are important to you, the X5 is definitely worth considering.

If only the scope mounting and sighting-in were implemented better, that alone would completely change our opinion of the X5’s value. Having the scope mounted and the gun really ready to shoot “out of the box”, would make a great value proposition that’s worth a big premium for most people.

The maxiumum muzzle velocity of the Stoeger X5 air rifle tested by HAM was 786 fps with alloy pellets. The H&H Field Target Trophy Green pellets in particular gave very good accuracy, a close second to that obtained with the JSB Exact 8.44 Grain lead pellets that were the best tested. Best muzzle velocity with lead pellets was achieved – as expected – by the RWS Hobby pellets, with close to 680 fps.

The highest muzzle energy – by far at 7 .6 ft/lbs – was given with the H&N Field Target Trophy Greens, indicating that the X5 gives its best efficiency with pellets in the 5.6 Grain range.

Why some pellets should give good, round-ish groups and others produced vertical inaccuracy is not clear. Normally stringing would be found with all pellets if there’s a problem with the gun.  Duhhhhh…..

Trigger pull weight of the X5 tested averaged 3 lb 2 oz, with a difference of only 6oz between the highest and lowest pull weights. This is good consistency and a light pull weight for this trigger.

HAM tester Paul Manktelow found the trigger pull to be “quite smooth” and he felt that cocking the X5 was easy and smooth.

Stoeger Airguns claims a maximum muzzle velocity of 800 fps with alloy pellets. Our X5 shot just 2% slower than this, reaching 786 fps. That’s close enough for HAM to agree with this claim.

With RWS Hobby lead pellets, the X5 shot at 678 fps. This handily exceeds Stoeger’s claim of 640 fps with lead, being about 4% higher.

The other claim made for the X5 is that the pre-mounted scope is bore sighted at 25 yards. Having the scope pre-mounted is a really great benefit for Stoeger Airguns scope combos compared to all other competing air rifles in this price range. The others require the user to mount and sight-in the scope – and this is a challenge for many. At least it should be a great benefit…

Unfortunately the execution of the scope mounting and sighting is very poor, so what should be a HUGE advantage for the X5 becomes an annoyance instead.

The scope sighted in 5-inches low at 10 yards – waaay low even allowing for the different range. Also the scope itself was rotated so that the reticle was annoyingly not vertical/horizontal but at an angle. (Yes, we know how difficult this is to avoid).

Yet worse was that the front bikini-type scope cover could not even be removed to shoot the gun as the scope was mounted too far forward with no clearance for the cover to be removed! See photo below. 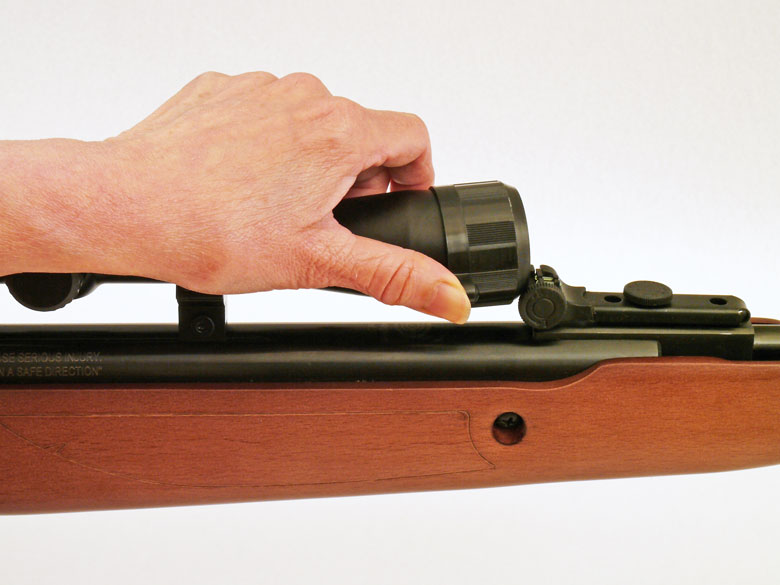 The only way the X5 could have had its scope sighted at the factory was for it to have been done before the rear iron sight was fitted. We can all have an opinion of how likely that was.

As noted, the trigger pull was very consistent on the Stoeger X5 air rifle, varying by only 6 ounces in our testing.

Standard Deviation was under 4 fps for 5 of the pellets tested – very good – showing that the action is capable of giving very consistent muzzle velocities.

But the X5 was “pellet picky”, resulting in varying accuracy that ranged from excellent to poor, depending on the pellet in use.

Subjectively the HAM testers found the Stoeger X5 to be quiet, as you would expect for an air rifle of this power lever. Some twang was evident to the shooter, but this was not considered to be excessive.

The Stoeger X5 air rifle is fitted with the expected set of fiber optic open sights, the front being hooded as a protection against damage and the rear having click adjustments for windage and elevation.

However, for the knowledgeable and careful shooter, the X5’s scope can be focused to a more airgun-suitable range. 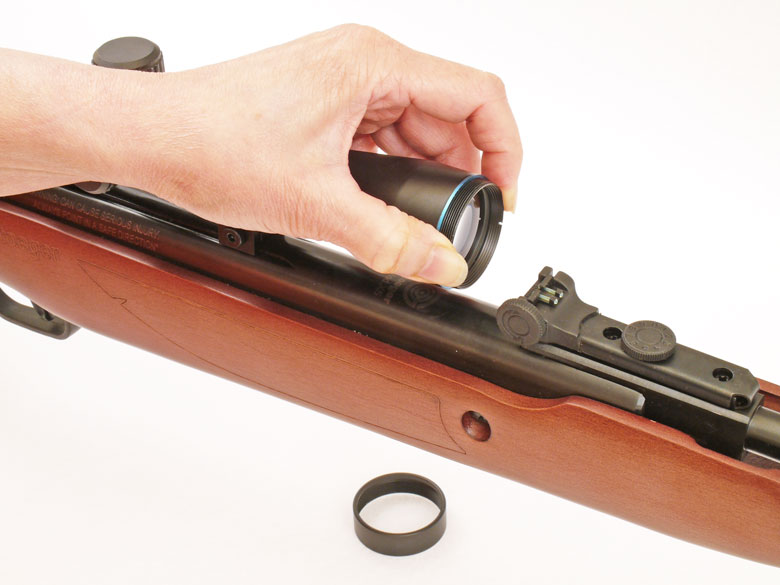 As a light weight, easy cocking air rifle with a light and consistent trigger, the X5 is good to shoot. Paul felt that this would be a good choice for teaching a young person to shoot – an opinion that matches Stoeger Airguns’ marketing of the product as a great entry-level air rifle. If that scope was just installed better, it would be an ideal “out of the box”shooter.

Other HAM testers noted that the thickness of the wood across the “wrist” of the stock (just behind the trigger) was large enough to possibly be uncomfortable for those with smaller hands, however.

The Stoeger X5 air rifle has a RateAGun score of 7.5, that is very low for a spring/piston air rifle and means that it’s enjoyable and not too challenging to shoot well.

The X5 has a plain ambidextrous stock of an even, solid wood with no figuring. It looks OK but not special, in HAM’s opinion. Bluing is good and the visible metal parts look to have been well finished.

The long plastic muzzle brake/front sight assembly is well styled and gives a good surface to grasp when cocking the air rifle. The molding quality of this and the few other synthetic parts is good.

Overall, appearance is practical and workmanlike.

All Stoeger airguns benefit from the best warranty in the airgun business. There’s 24 months warranty coverage from the date of purchase, compared to the usual 1 year from other vendors.This gives an indication of the confidence Stoeger Airguns has in the quality of its products.

Also Stoeger Airguns does not require you to send a check for the return of the gun for warranty work. You pay to ship it to them, they pay to ship it back to you. This seems fair and reasonable to HAM, but it’s far from universal in the airgun world.

A range of spare parts is available for the X5, so knowledgeable, mechanically-minded owners can feel that they’re making an investment for the long term whan buying the X5.

Packaging of the X5 – as for all Stoeger airguns – is excellent, with a complete foam cradle to protect the gun during shipping. This is important because it helps to ensure that the gun reaches you in good condition.

Instructions come in the form of a thick booklet. But it’s thick because it covers many languages – 11 actually, including Turkish and Russian! All the expected information is included and it’s well illustrated so that the points are easily understood. 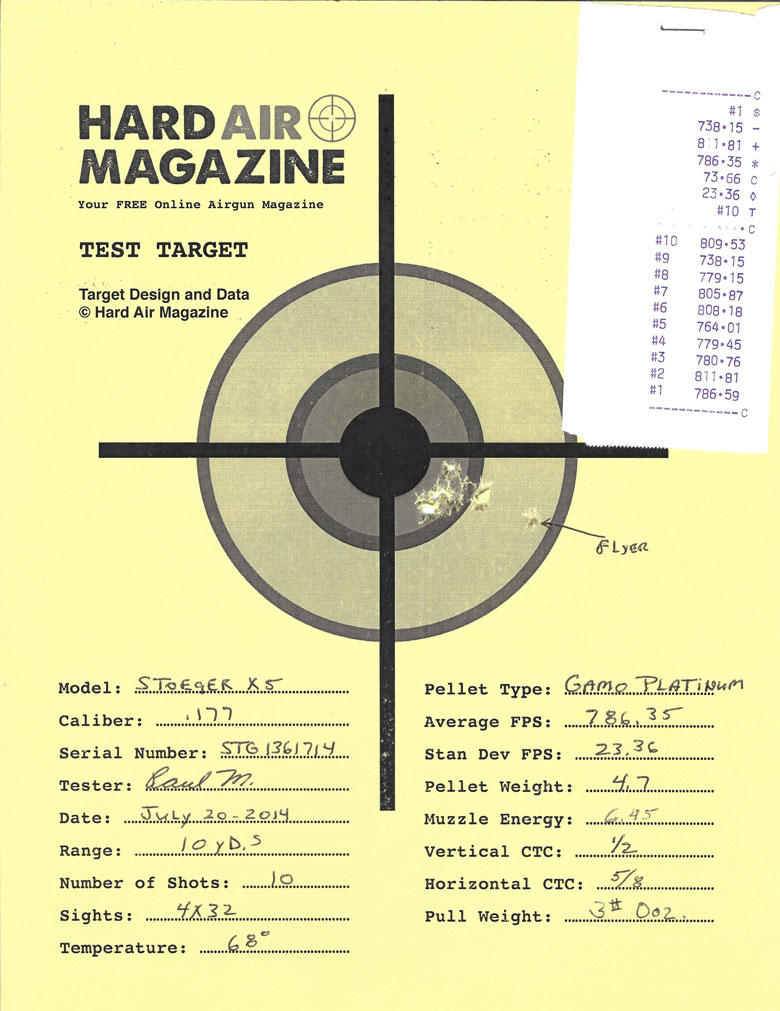 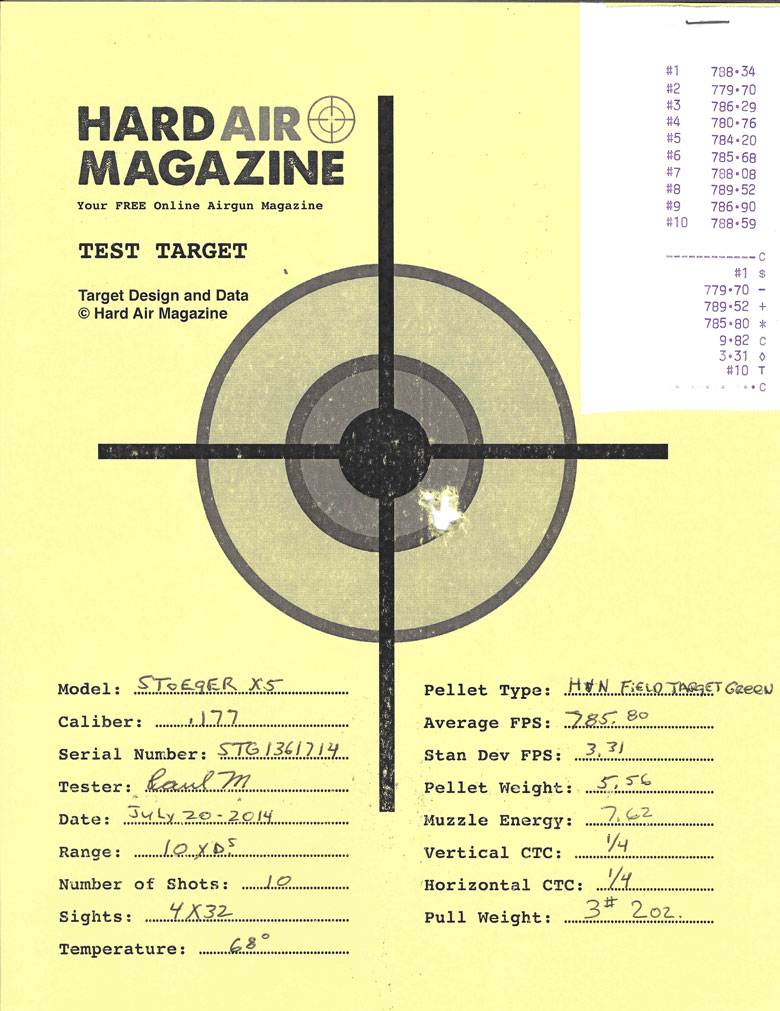 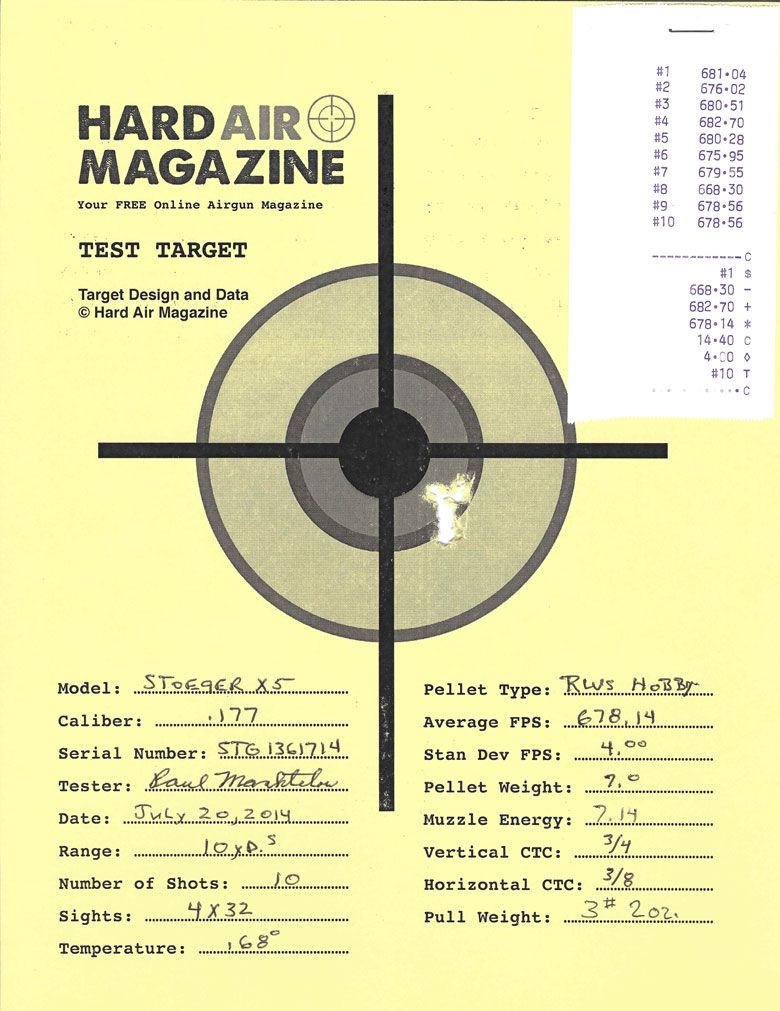 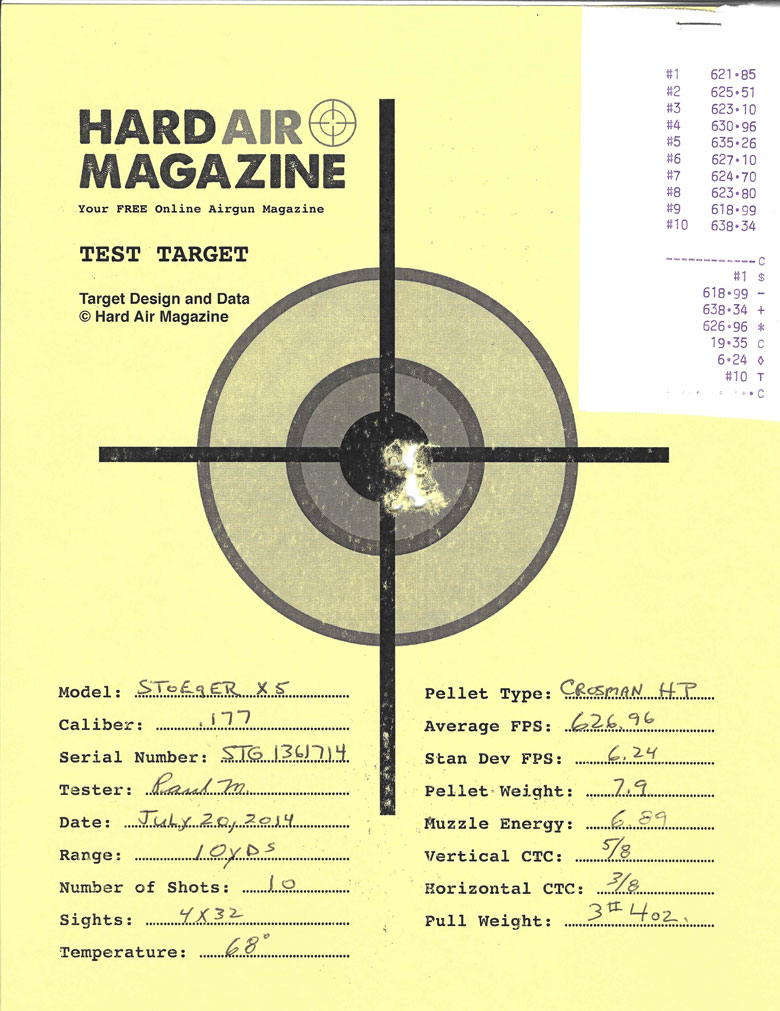 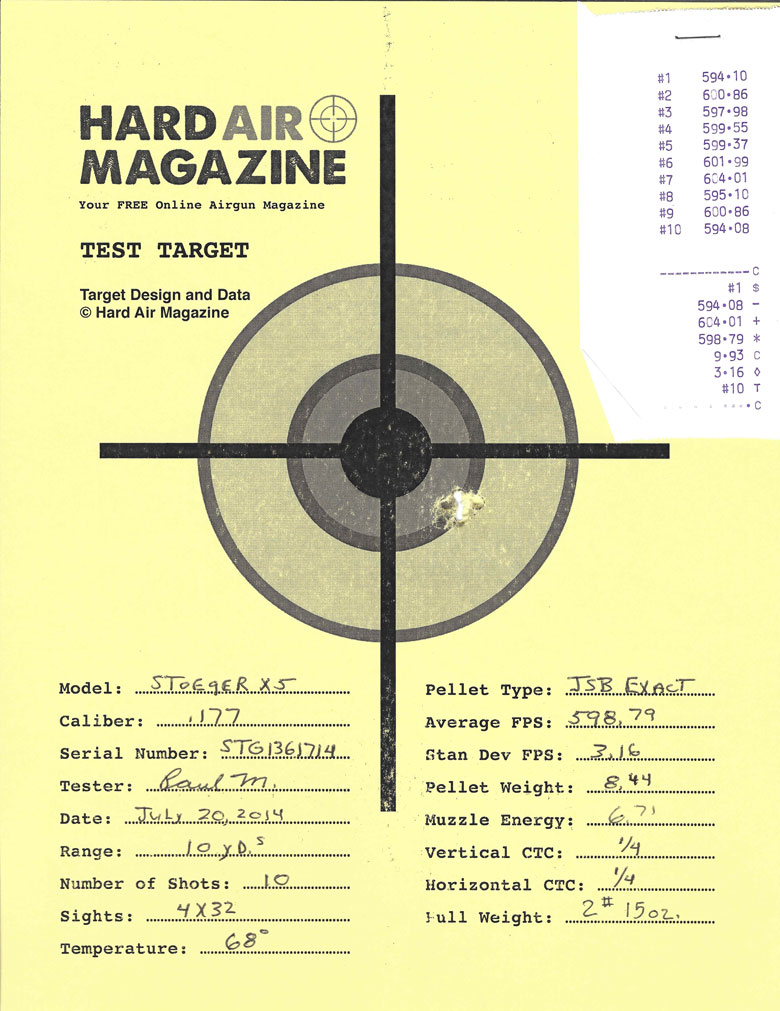 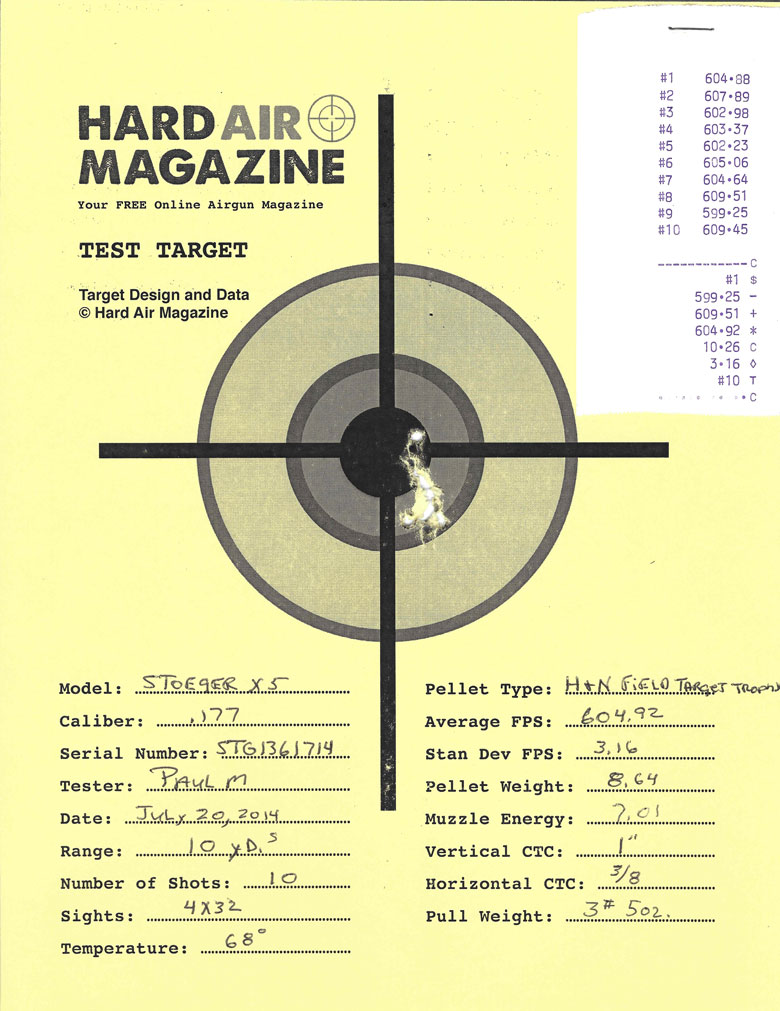 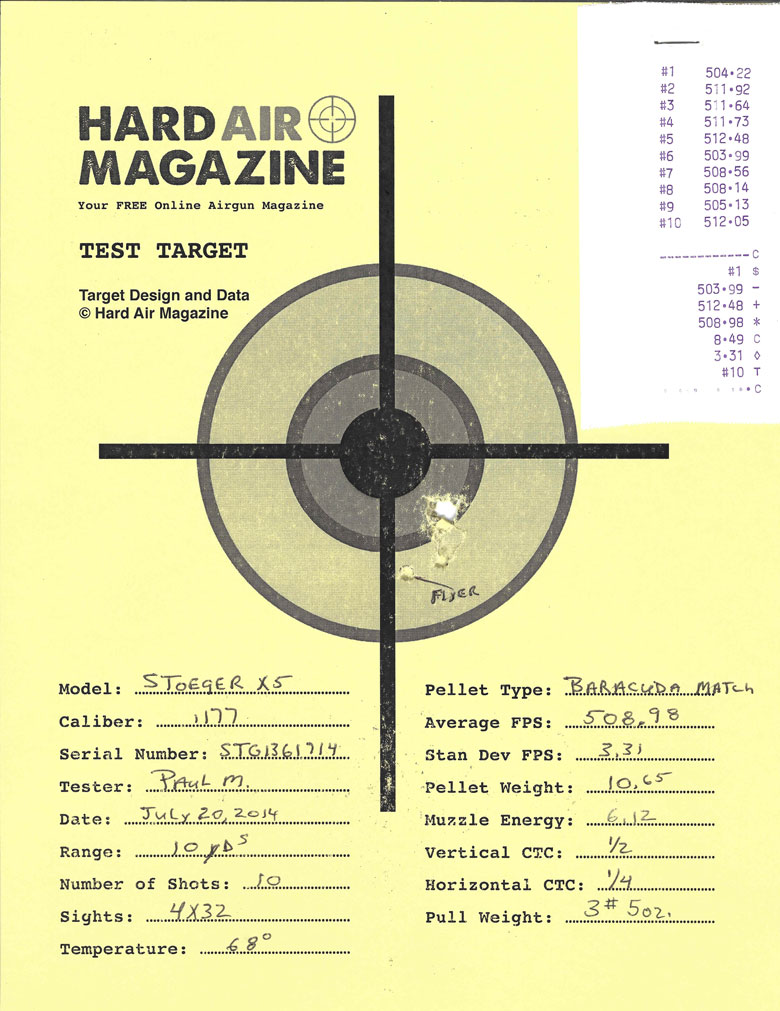