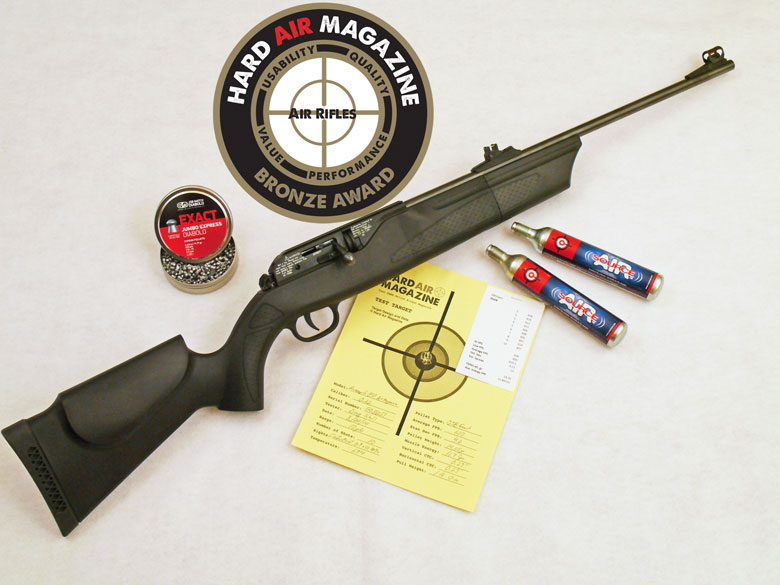 Great trigger.
Easy to shoot.
Accurate with all tested pellets.

OK, let's be clear about it. The HAM team loves the Hammerli 850 AirMagnum.

It's accurate, has an 8-pellet clip with convenient bolt action and it handles very well. There's no recoil and no heavy cocking effort to compress a spring or gas ram. For these reasons it scores an outstanding (low) RateAGun score of just 4.1 - that confirms it's really, really easy to shoot well for almost any shooter.

And the price is fair for what it offers.

So why is it not the best-selling air rifle out there?

That's because the 850 AirMagnum chooses not to compete in either muzzle velocity or quietness. It's fps numbers are relatively low and as it has no silencer it's not for the "quiet gun" set. Unfortunately for the 850, these are the "big two" deciding factors for many current air rifle buyers and that must surely limit its sales.

For its combination of quality, usability, value and performance, the Hammerli 850 AirMagnum air rifle receives a HAM Bronze Award.
And then it's taste in CO2 supply makes it relatively expensive to run.

But if you're looking for an accurate air rifle for plinking, target shooting, firearms practice, or shooting with the family the Hammerli 850 AirMagnum has to be a great choice.

78%
HAM Rating
You have rated this
Full Review

This is difficult. The 850 is an air rifle that stands out from the crowd with a very different feature set to the majority of airguns.

For many people, muzzle velocity is by far the most important attribute of any air rifle. In this case the AirMagnum 850 is blown out of the water by the vast number of break barrel spring- and gas ram-powered models out there at similar prices. A CO2-powered gun having a good shot count per fill can never compete with the muzzle velocity of a powerful break barrel air rifle.

Nor is the 850 quiet – another very common requirement for many buyers.

But if you’re looking for a magazine-fed, bolt action air rifle that’s accurate and easy to shoot, there are very few competitors to the Hammerli 850 AirMagnum in the $250 – $280 Street Price range. This is an air rifle that can be a great value for the right person.

No CO2-powered air rifle is going to be a real speed demon – at least not if it’s also capable of a reasonable number of shots per fill. Users of CO2-powered airguns are usually drawn to other benefits, such as multi-shot capability, lack of recoil and simplicity (read lower cost) compared to PCPs.

HAM tester Doug Wall shot the Hammerli 850 in an ambient temperature of 67 degrees F. Here’s the muzzle velocities he recorded with the standard range of HAM test pellets.

As we’ve mentioned before, muzzle velocity is a more complicated question for CO2-powered airguns – of any type – than is the case for spring/piston, gas ram or PCPs.

This increase in muzzle velocity doesn’t continue indefinitely, however. At around 95 degrees F the increasing pressure causes “valve lock” in the gun and muzzle velocity falls rapidly. So somewhere around 90 degrees F is usually a maximum shooting temperature for CO2-powered airguns.

(If your CO2-powered airgun does suffer valve lock, simply take it to a cooler place. As the gun cools down, so the pressure of the CO2 will reduce and the gun will shoot normally again).

Accuracy with the Hammerli 850 AirMagnum tested by HAM was very good. Groups were well controlled with all the standard HAM test pellets with best accuracy achieved by the JSB Jumbo Exact pellets. This was an outstanding almost “one hole” group!

Probably more important than this, however, is that the 850 AirMagnum tested was definitely not pellet picky and showed good accuracy with the whole range of HAM standard pellets.

Trigger performance of the Hammerli 850 AirMagnum tested by HAM was really excellent. Pull weight was rock-steady at just 1 lb 0oz, yet the gun was safe at that very light pull weight and would NOT discharge accidentally (we tested that!). Trigger pull was very smooth and consistent, although the second stage will be missed if the trigger is “snatched” when shooting.

Yes, we’d prefer a metal blade instead of the plastic one on the 850, but you can say that’s a personal preference.

The 850 AirMagnum uses a cock-on-opening bolt action that’s easy to manage. Unlike many break barrel, spring (or gas ram) air rifles, this means that the 850 can be shot all day without strain and is easy for younger, or less strong shooters to manage. The bolt action also means that this airgun operates just like a firearm, for the most part, and that’s a big attraction for many shooters – particularly those moving to airguns from a firearms background. 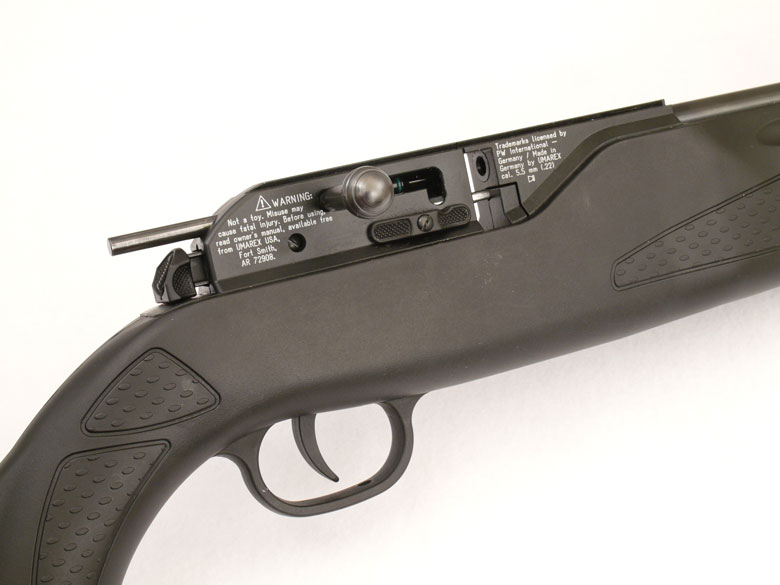 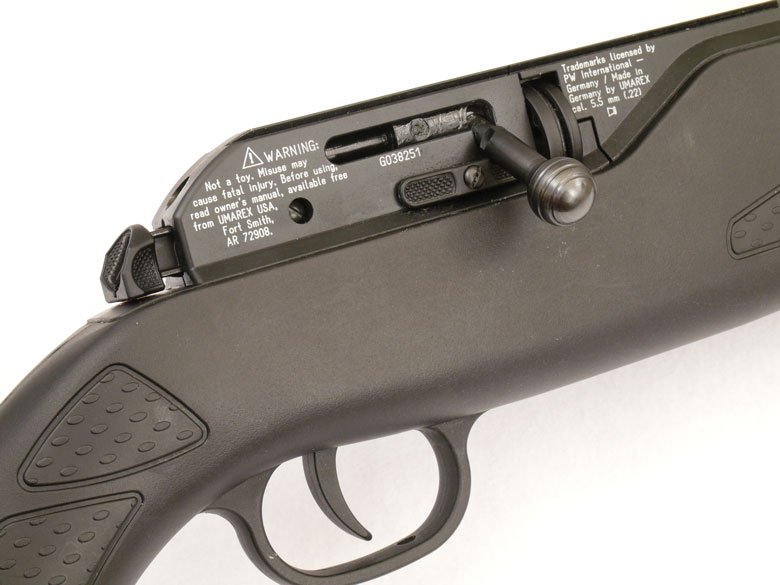 With this type of cock on opening action, you’d expect the forward travel of the bolt to be smooth as butter. But the 850’s bolt is surprisingly rough and balky on the closing stroke. Maybe this would smooth out with use, maybe a little more lubrication would help. There’s nothing actually “wrong” with this action, it’s just that we expected it to be smoother. Regular users probably get used to it and don’t think twice…

Umarex claims a muzzle velocity of 655 fps with lead pellets for the Hammerli 850 AirMagnum. Surprisingly, this figure is not given with a corresponding temperature, given the variability caused by temperature changes.

At any rate, it’s clear that the 850 HAM tested matches the manufacturer’s claims exactly at 75 degrees F when using RWS Hobby pellets. As we’ve seen, it exceeds the velocity claim at any temperature above 75 degrees F with the same pellet type.

Trigger pull weight is claimed as 2.5 lbs. The test gun beat that significantly!

Umarex claims that up to 200 shots can be fired from one 88 gram CO2 cylinder. This is probably true, however, HAM testing showed that around 160 strong, full power shots is a more realistic expectation, particularly if shooting at longer ranges, or firing fast – as the bolt action encourages you to do. Yes, more shots are available, but the muzzle velocity will drop and shots “string” down the target as the CO2 in the 88g cylinder is used. This, of course, is inherent with all CO2-powered airguns and is not a strike against the Hammerli 850 AirMagnum as such.

The Hammerli 850 AirMagnum gave good consistency for accuracy with all the HAM test pellets – as has already been noted.

Standard Deviation (the measurement of shot-to-shot variability in muzzle velocity) dropped as low as 4.2 fps with JSB Jumbo Exact pellets and overall was held well down. This consistency extended even to the light weigh alloy pellets, which regularly show very high numbers: with Gamo Paltinum PBA pellets, for example, the Standard Deviation recorded by the 850 AirMagnum was just 8.7 fps – the best performance HAM has measured to date.

Trigger pull weight was rock-steady, with effectively no measurable variation when tested for HAM by Doug Wall. That’s outstanding!

The Hammerli 850 AirMagnum is a high-powered CO2 air rifle with no sound suppression system. We expected it to be pretty loud and were not disappointed!

Of course, the noise level is not high compared to even a .22 LR firearm. Also, pellets fired from the 850 will never exceed the speed of sound, even in .177 caliber, so sonic boom is not an issue either.

As HAM tester Doug Wall noted, the noise is a typical CO2 “thwap”, rather than the sharper and louder “crack” of an unmoderated PCP (think Benjamin Discovery).

Nevertheless, shooters who have quietness as a top priority will probably find the 850 somewhat too noisy for them.

The Hammerli 850 AirMagnum is not supplied with a scope. This is both good news and bad!

Good is that you don’t pay for a poor scope – as so many are – bundled with the gun and you can choose the scope you like best. Bad is that you need to pay for that extra scope!

The 850 is fitted with fiber optic open sights and so can be shot straight from the box.

But be aware that these sights are not click adjustable and the rear sight has no windage adjustment, as you would expect.

The rear sight has adjustment for elevation by loosening a screw, sliding the sight along a ramp then re-tightening the screw. Adjustment for windage is made by “drifting” across the front sight and guessing the effect. This is a “trial and error” method of sight adjustment and the AirMagnum deserves better.

Note that Doug Wall fitted a 3-9x40AO scope for the HAM tests (as we do for all un-scoped air rifle tests).

Like most CO2-powered airguns, the 850 is very easy to shoot. There’s no heavy cocking, no recoil and no need to learn – and perfect – a special hold to achieve best accuracy. This explains the outstanding RateAGun score of just 4.1 – that’s really easy to shoot!

The great trigger and bolt action clip feed also make for easy shooting. Doug Wall found the balance good and that the AirMagnum is quick and easy to point on target.

As always, HAM testers don’t like the automatic safety, but that’s the way it is. Also, it took us – well, um, actually me – some time to figure out its operation. The automatic safety is disengaged by pushing the small serrated vertical section of the safety. Just thumbing forward the wide, stippled area without depressing that serrated section doesn’t do it.

Loading the clip is easy and intuitive. But we suggest you take the time to push every pellet right down into its hole so that the narrow waist of the pellet is seated correctly by the O ring that runs around the clip. We experienced no jams or misfeeds during the HAM testing.

One potential improvement – as Doug Wall points out – would be to have some sort of counter on the clip – as is done with the Benjamin Marauder magazine. With the 850, it’s too easy to forget how many shots you’ve taken and then find you’re shooting blanks…

HAM testers like the look of the Hammerli 850 AirMagnum. The CO2 cylinder is well concealed inside the removable forearm of the stock, that’s a good piece of design. 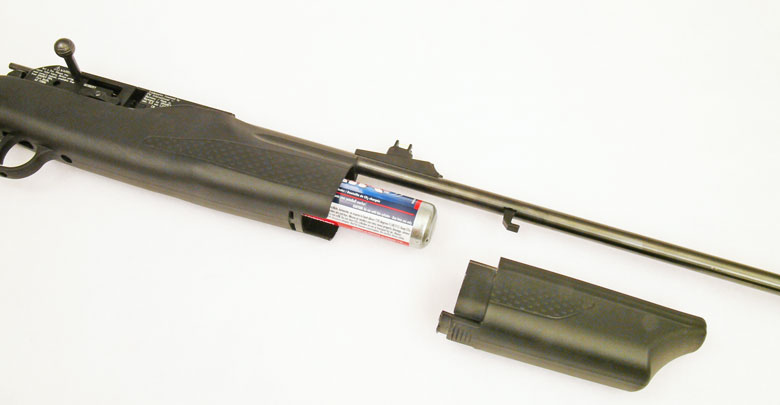 Metal parts are well finished and plastic parts such as the black ambidextrous synthetic stock are well molded.

Note to Umarex USA. We’d really like to see the wood stock version of the 850 available in the US. This was (still is?) available in Europe. Maybe the cost would be too high, though.

The Hammerli 850 AirMagnum is not easy to find. You’re unlikely to walk in to a sporting goods store and find it on the shelf. The overwhelming majority of these air rifles are being sold by online Internet stores.

Packaging is beautiful, with a huge white foam box to protect the gun in shipping before it gets to you. The written instructions supplied are good, with plenty of illustrations to help explain functionality.

The 12 month warranty is average for an air rifle.

Also, Umarex USA does have spare parts available via their Service Department in Fort Smith AR and knowledgeable airgunners will be pleased to know this for the long term servicability of their 850.

Unfortunately the cost of CO2 is a major downside to the 850 AirMagnum. 88 gram cylinders are about the most expensive way possible to buy CO2 for airgun use – around $20 for two – and these cannot be refilled. But that’s the price you pay for the many shootability benefits this air rifle offers. 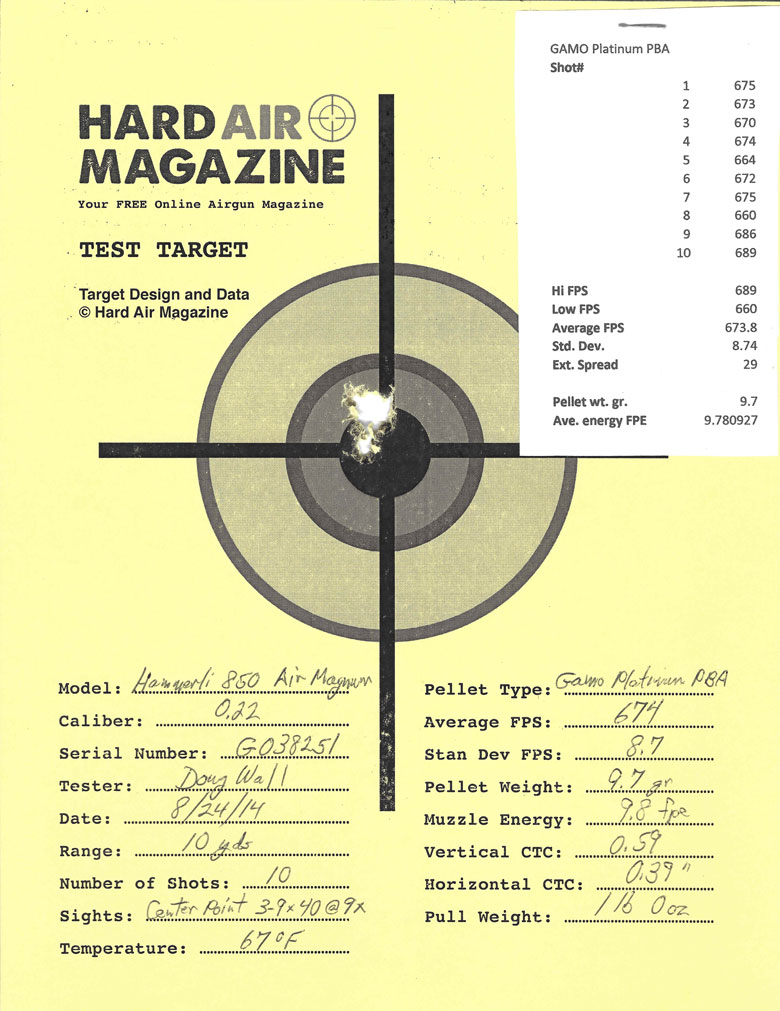 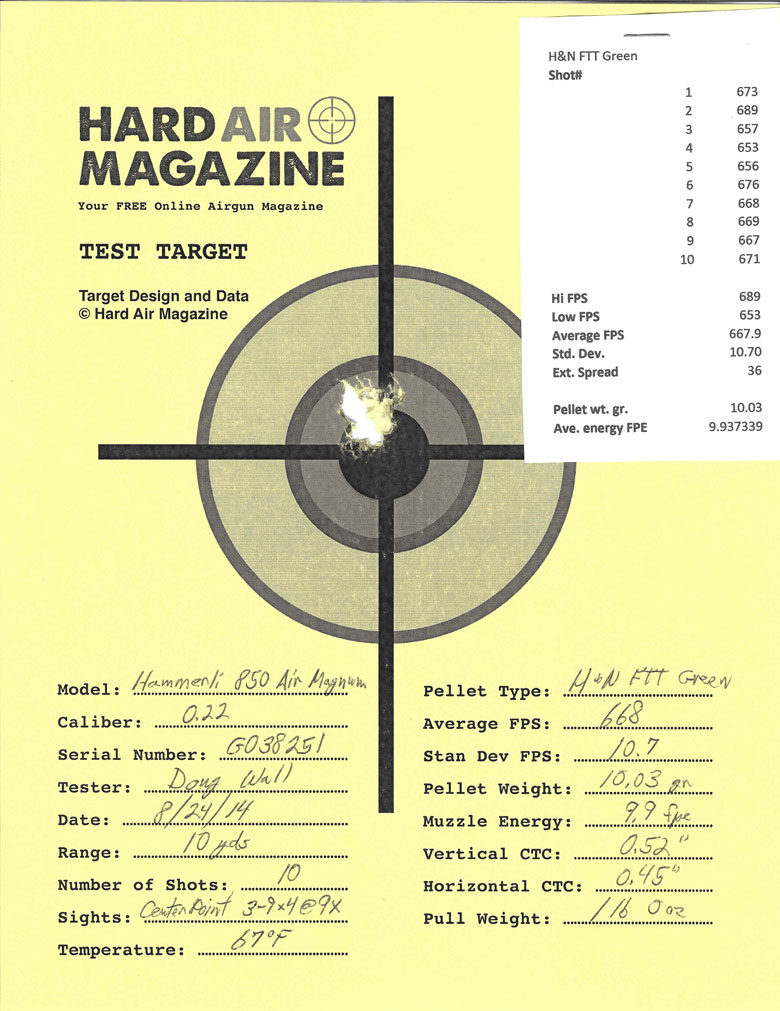 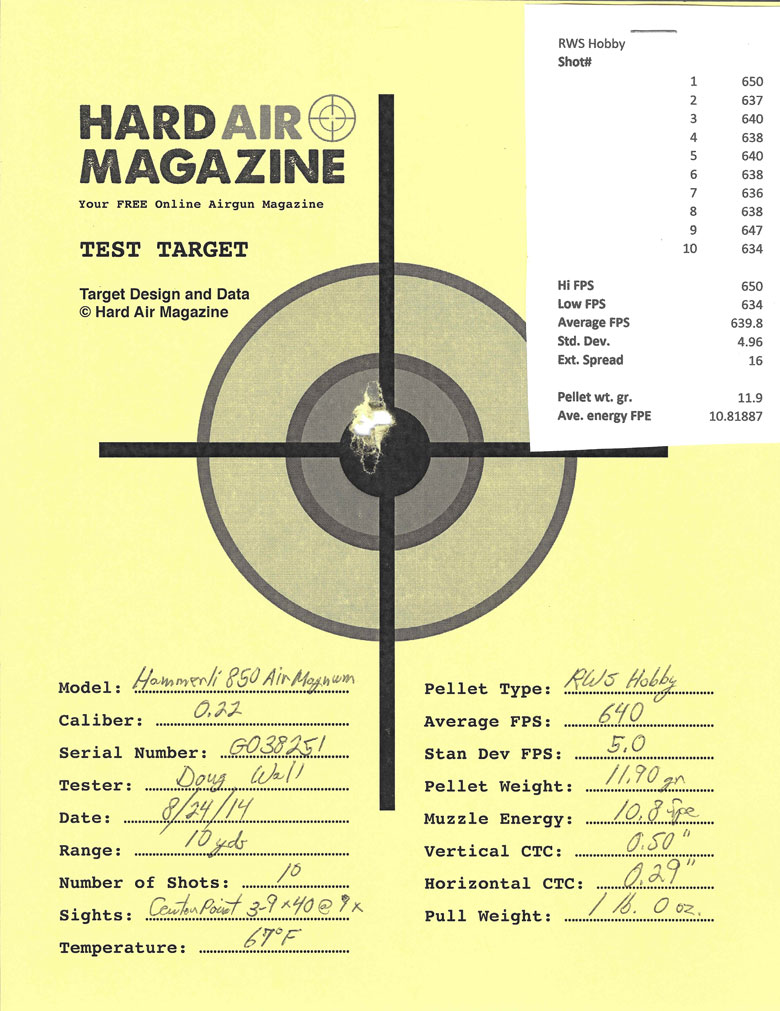 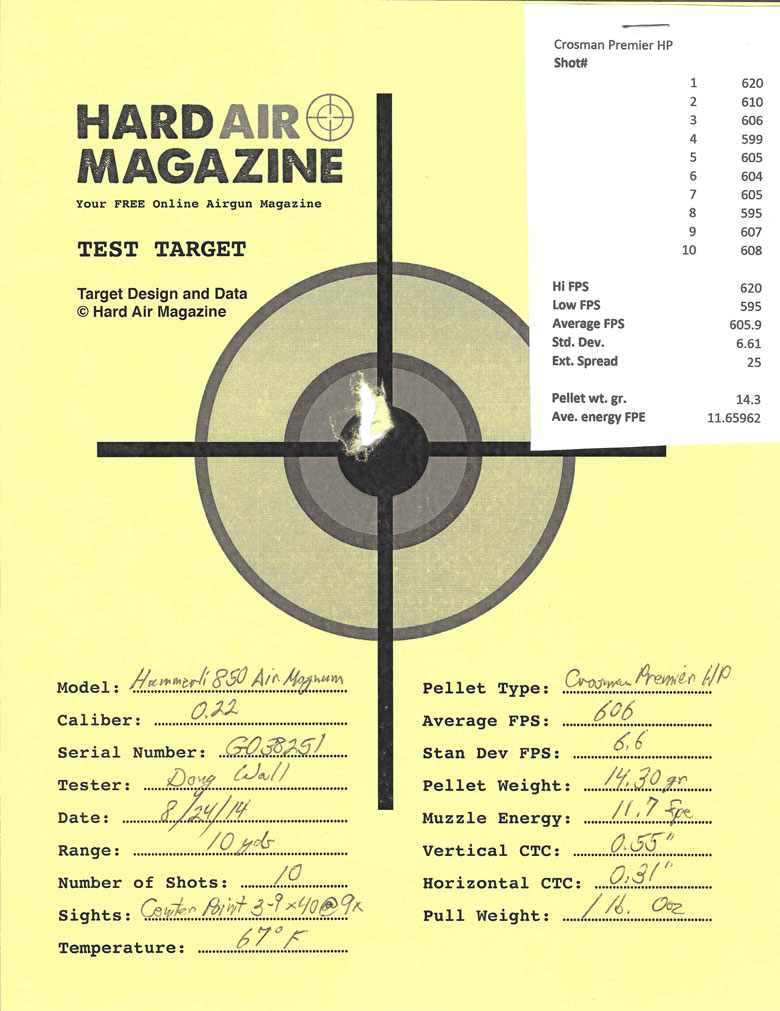 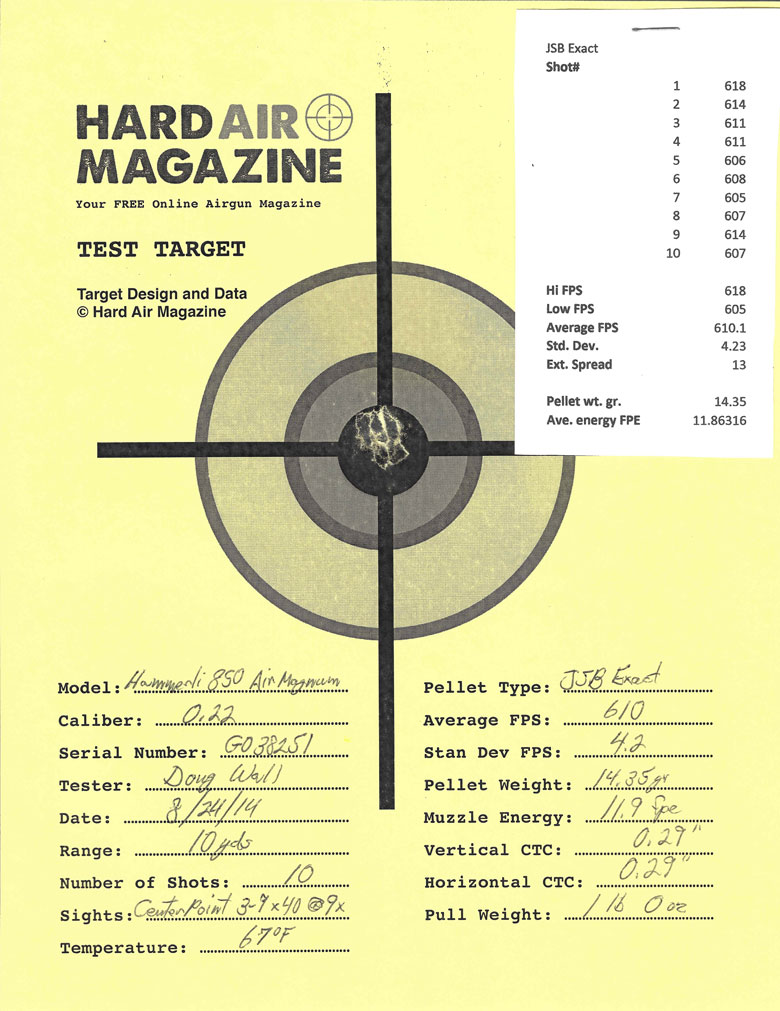 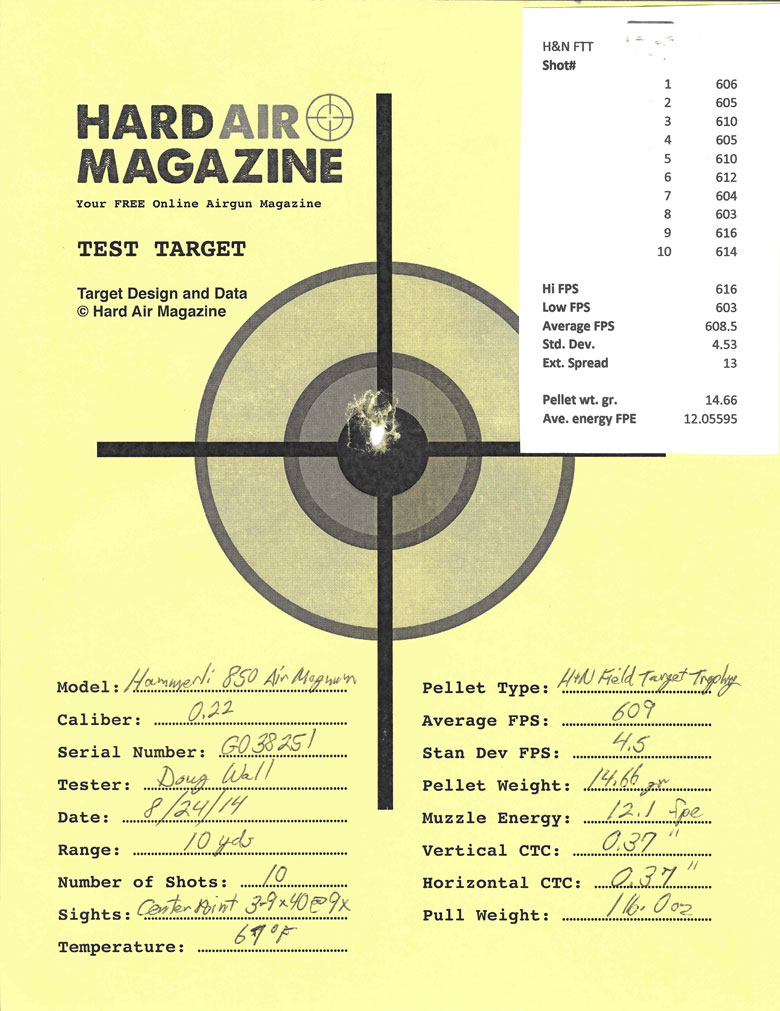 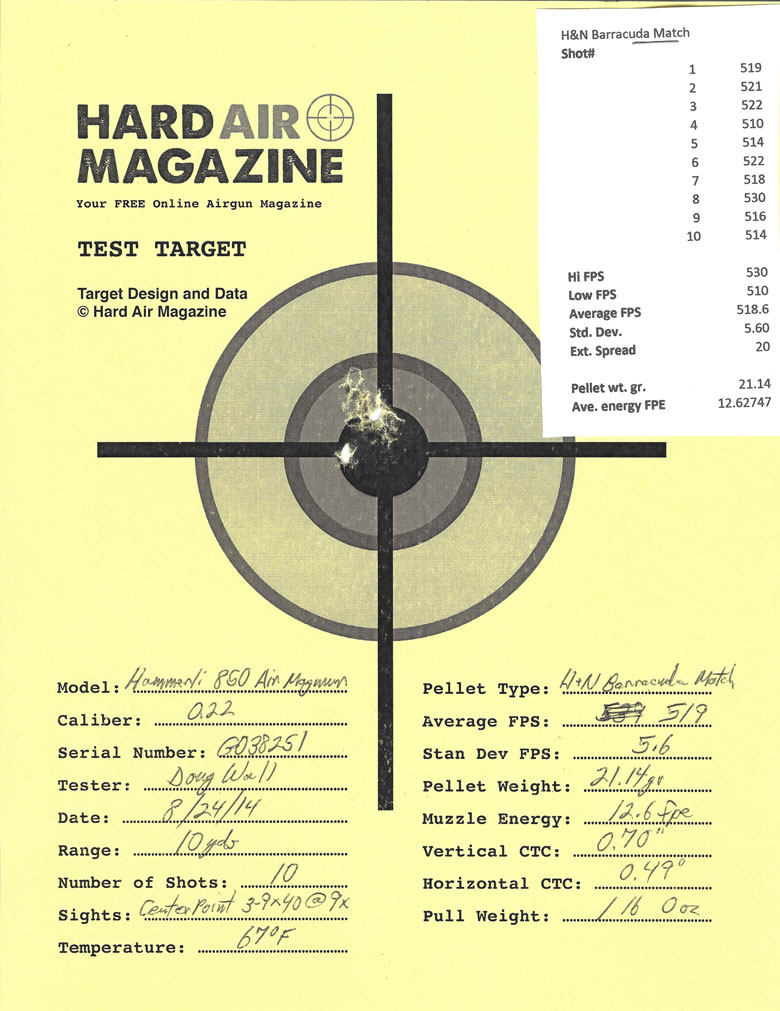 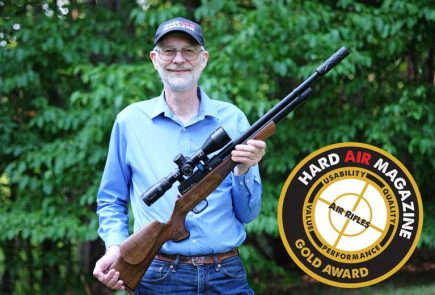