NOTE: As American Tactical is – sadly – out of the airgun business, it’s good to know that (almost) the same model is still available from Air Venturi. Branded as the Seneca Aspen, it differs from the Nova Freedom only in bundling a scope with the gun instead of including iron sights. The Seneca Aspen is also available in .25 caliber, which makes it ideal for hunters.

The Nova Freedom has a maximum fill pressure specification of 3,600 PSI. However, looking at the Chrony printouts in the HAM test review, it’s clear that the first shot was always slower than subsequent shots.

This is an indication that 3,600 PSI is really slightly too high a fill pressure for consistent shots. Filling to 3,400 or 3,500 PSI will actually give a faster first shot, even though it’s at a lower pressure.

This is important to understand because the Nova Freedom is – of course – a multi-pump air rifle. Just about everyone assumes that they will achieve higher FPS from any multi-pump airgun if they just pump it more.

It’s rarely true and it’s definitely NOT true with the Nova Freedom.

The Nova Freedom is fitted with a power adjustment knob on the left side of the breech. With two settings – High and Low – and no intermediate setting possible, this is almost certainly a transfer port changer. (I promised not to take the gun apart and don’t have a parts diagram).

What we have here are two alternative transfer ports which regulate the air supply between the valve and pellet. The larger port allows the air through faster and gives the highest FPS – High Power.

It’s clear that this power adjustment knob works and that it provides an easy, simple way of power tuning the Nova Freedom.

However there’s a third method of power tuning the Nova Freedom using the built-in controls.

This is actually found on page 11 of the user’s manual, described as a maintenance adjustment. 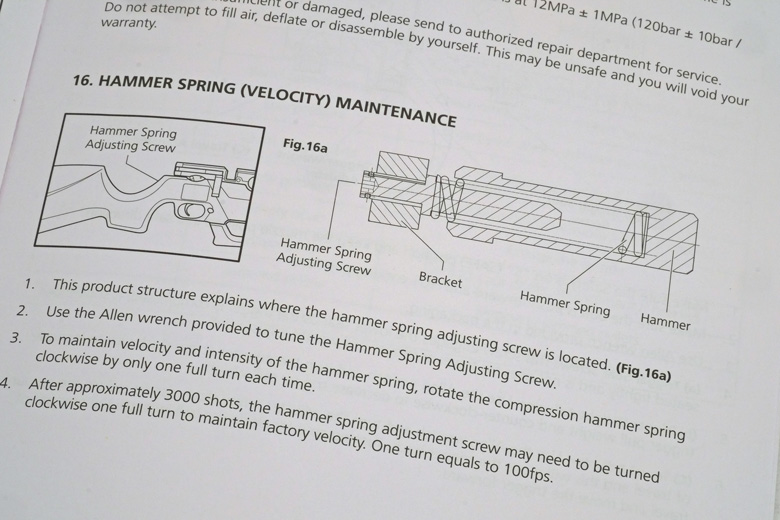 For there is a built-in hammer spring tensioner available at the rear of the Freedom’s breech. It’s obviously not designed for regular use, requiring the 2.5mm Allen (hex) wrench supplied with the gun to operate.

The manual explains that it may need to be turned after about 3,000 shots to maintain factory FPS. “One turn equals to 100 FPS”, it says.

Now here’s something really interesting, with real potential for power tuning the Nova Freedom air rifle! In other airguns it would be called a power adjuster. Let’s investigate what it can do…

4. Power Tuning the Nova Freedom By Adjusting The Hammer Spring

To gain some idea of the potential for power tuning the Nova Freedom by adjusting the hammer spring tension, I ran a series of tests.

Firstly I decided to use 14.35 Grain JSB Jumbo Express pellets for all tests as we had already used them for the shootdown test in the full HAM review.

Taking the review shootdown test as a basis (it was done for both High and Low power settings), I ran the same test with the hammer spring adjuster one turn back out. Then I did the same with the adjuster one turn in from the factory setting and two turns in. 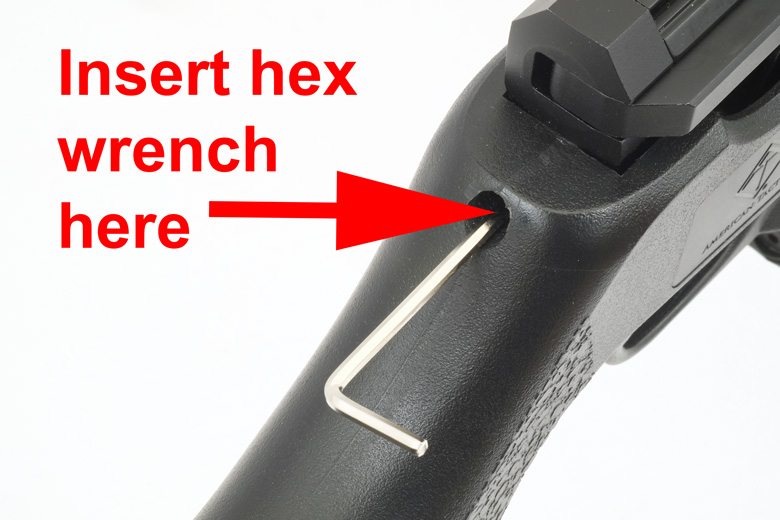 In each case, the gun was filled to 3,600 PSI using an external tank and then shot dry.

This gave eight sets of data, four on High power and four on Low. The expectation was that the “one turn out” setting would give more, slower shots. The other settings would give less shots but with more power.

Did it work out like that? The answer is “yes-ish”.

As always, your mileage may vary with another individual Nova Freedom.

Most people will probably want to gain more power from their Nova Freedom. As you can see, one turn more on the hammer spring gave slower FPS for the first 4 shots. After that, the FPS increased for shots 5 – 8, before falling again. All in all, this setting gave similar results to the factory hammer spring setting but with the addition of 3 additional usable shots per fill.

Setting the power adjuster two turns in gave a notably slower first shot. However this was followed by a series of significantly more powerful shots, particularly the second, third and fourth.

The greatest increase in FPS achieved was on shot 2, where we gained 22.3 FPS from the adjustment. That way of power tuning the Nova Freedom increased the Muzzle Energy from 30.59 Ft/Lbs to 32.00 Ft/Lbs, a very significant increase of nearly 1.5 Ft/Lbs.

Some shooters value a larger number of more consistent shots over sheer power, however. As the blue line shows, power tuning the Nova Freedom by reducing the hammer spring tension one turn gives a much flatter shot curve. It also gives 18 usable shots on one fill at High power, compared to 12 shots at the factory setting.

By selecting Low power, it’s clear that a user values more shots per fill rather than higher FPS for a few shots.

Here the results of our tests are quite different. As you can see, cranking in the hammer spring screw does no good for either FPS or shot count. In fact, you actually get less shots of, generally, less FPS.

Reducing spring tension by one turn gave the possibility of two additional usable shots. However, the real benefit here was the considerably flatter (blue) shot curve. Yes, the FPS is less than at the factory hammer spring setting, but it gives you 25 or 26 shots with a surprisingly tight extreme spread. This is the setting to use for consistent accuracy in target shooting with the Nova Freedom!

We can obtain a good indication of the air efficiency of the Nova Freedom in these various hammer spring settings by comparing the TOTAL Muzzle Energy of the “good” shots at each setting.

To do this, we simply add the Ft/Lbs figure for each shot in the string and make a total. Comparing these totals at each setting gives us the following chart. Here High power settings are in blue, Low power in green. The numbers in each column indicate the sum total Ft/Lbs at that setting.

Clearly, the Nova Freedom has considerably greater air efficiency on Low power setting than on High power. Also, it is much more efficient with the hammer spring adjusted one turn back out.

Maximum air efficiency is obtained on Low power with the power adjuster one turn out. That gives, by far, the most total Muzzle Energy for your pumping effort.

Setting the power adjuster two turns in on High power gives not only the highest FPS, it also gives 16% more total Ft/Lbs than the factory setting.

Based on the American Tactical Nova Freedom tested by HAM, we can make the following simple power tuning conclusions:

Don’t over pump the gun. In fact, best FPS for the first shot will always be achieved with sightly less than a maximum pressure fill, or if the gun is filled full and then the first shot taken as a blank.

For maximum power, set the hammer spring adjuster one turn in. Either slightly underfill the pressure or fire the first shot as a blank. Pump up to 3,400 – 3,500 PSI after every 3 or 4 shots for maximum consistency at full power.

For the flattest shot curve when target shooting, set the hammer spring adjuster one turn out on Low power. Pump up again after 25 – 26 shots.

The Seneca Aspen And Nova Freedom Are Siblings!
Read More 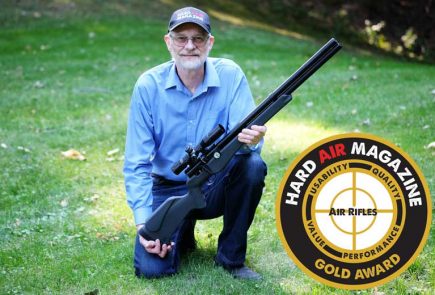