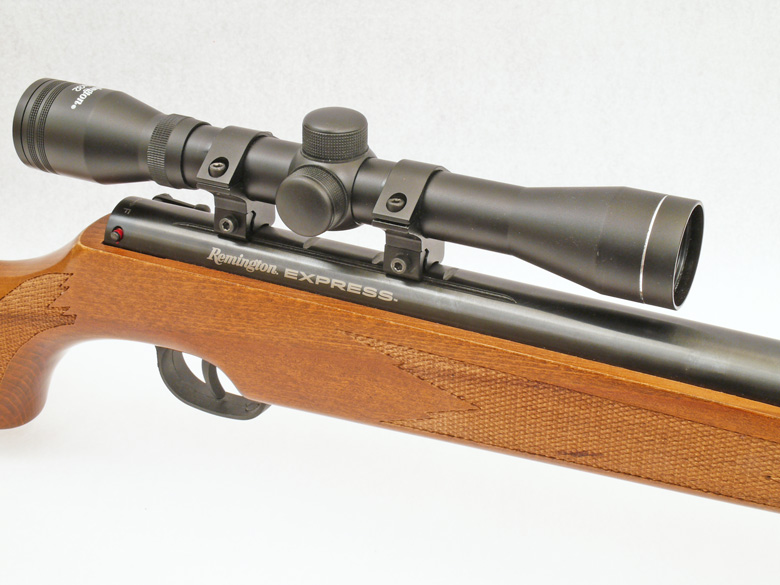 We wanted to love the Remington Express air rifle. We really did!

It looks beautiful, with a fit and finish that's way above most other air rifles in this price range. And the price is fair for what's on offer.

But the accuracy problems associated with the lack of a scope stop mean that this gun really can only be used in "iron sights" mode, or it requires a set of special $30 rings to hold the scope in place and overcome the vertical inaccuracy demonstrated in the HAM test gun. That's very disappointing...

HAM hopes that Remington will correct this scope stop issue in future. If just that one issue were to be resolved, the test score would jump by somewhere around 20 points and the Express would rank with the leaders in this market!

56%
HAM Rating
You have rated this
Full Review

Street Price for the Remington Express at the time of writing is $150 (although they have been sold at retail for as little as $100 in the past).

At $150, in theory, the Remington Express air rifle should be good value for money. But sadly the lack of accuracy highlighted in this HAM test report deeply discounts this expectation.

If you want to shoot with open sights only, it’s OK. But otherwise the need to spend serious money for suitable scope rings that overcome the lack of a scope stop really sinks the value proposition for this air rifle.

The muzzle velocities obtained with the Remington Express air rifle tested by HAM were close to our expectations, even if somewhat below the manufacturer’s claims.

That would be OK, but unfortunately accuracy of the Remington Express air rifle tested by HAM was poor.

It’s not that the gun itself is so terribly inaccurate as that the scope mounting system causes significant vertical “stringing”, resulting in overall poor accuracy. You can see this yourself in the test targets below. There’s more details in the “Sights and Scope” section of this test review.

Sadly, this degree of inaccuracy makes it very difficult to identify the best pellets for use with Remington Express air rifle. Based on HAM tests, the RWS Hobby pellets gave our best groups.

This trigger pull weight is good for a spring/piston air rifle of the Remington Express’s power, and is considerably lower than for some competing models.

Cocking effort measured 42lbs – quite high. This is around 25% higher than typically is found with other spring/piston air rifles with a nominal 1000 fps muzzle velocity.

The manufacturer’s claims for the Remington Express air rifle are based on muzzle velocity (of course!) and, more surprisingly, also muzzle energy.

Remington has joined Crosman in making more play of the muzzle energy – or “knock down” power of their air rifles, rather than stressing just the muzzle velocity. HAM agrees that this is sensible as it gives – or should give – a better idea of the real capability of the gun when used for hunting, as so many airgunners want to do.

The muzzle velocity claim for the Remington Express is the (obligatory) 1000 fps with lead pellets and 1200 fps with alloy pellets.

The highest muzzle velocity achieved in this HAM test was 1093 fps with Gamo Platinum PBA pellets. That’s 9% less than the claim.

Maximum tested muzzle velocity with lead pellets was 952 fps with 7.0 Grain RWS Hobby pellets. That’s about 5% below the claim.

Remington claims 16 Ft/Lbs of muzzle energy for the Express. The maximum achieved during the HAM tests was 14.28 Ft/Lbs with 8.64 Grain H&N Field Target Trophy lead pellets. That’s nearly 11% below the claim.

Either the HAM test gun is a “slow” example, or Remington’s claims for the Express air rifle are somewhat optimistic.

The best Standard Deviations (a measurement of variability in muzzle velocity within a 10-shot string) measured 4.84 fps with RWS Hobby pellets. However, the average Standard Deviation in the HAM tests was 12.7 fps, a fairly high figure for this type of air rifle in the HAM standardized test procedure.

Trigger pull weight was fairly consistent, with the average of 3lb 7oz varying between the extremes of 3lb 2oz and 3lb 10oz. This is good performance.

Unfortunately, tested accuracy of the Remington Express air rifle was consistently poor, due to issues with the scope, rings and lack of scope stop mentioned in several other parts of this test report.

The HAM test team assessed the noise level of the Remington Express air rifle as about average for an air rifle of this power. As always, this is our subjective assessment.

No silencer is fitted to the Express, but HAM tester Doug Wall noted some vibration and “buzzing” from the spring on firing.

However, for the knowledgeable and careful shooter, the scope supplied with the Remington Express scope can be focused to a more airgun-suitable range.

With care, it’s possible to unscrew the outer ring of the scope (in front of the silver ring) and then turn the front lens mount until the sharpness at your chosen range is improved. Then screw the outer ring back into place. It’s a sort of “one time AO”. Doug did this for the HAM test and found it made a big improvement to the sharpness at 10 yards.

The open sights are very acceptable, with fiber optic dots on front and rear sights. The rear sight is adjustable for windage and elevation, as is expected. The front sight is set high and there’s a tendency for it to be visible as a blurry shadow when seen through the mounted scope.

Although the scope is of average quality for a bundled scope at this price point and, of course, it’s supplied unmounted, there’s a HUGE problem here not found with other spring/piston air rifles.

There’s no scope stop! See the photograph below. 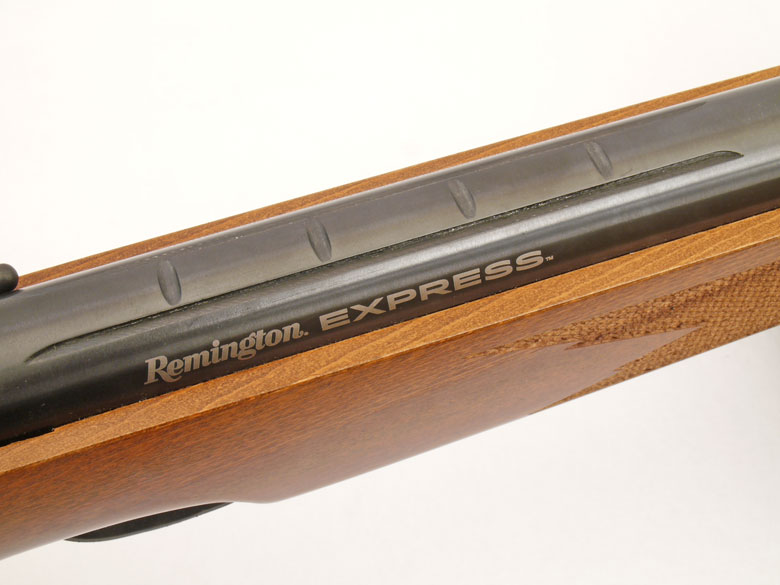 Without a scope stop or stop screw hole on the air rifle, it’s almost impossible to stop the scope from moving backwards due to the recoil when fired. This effect is magnified by the flimsy scope rings bundled with the gun.

The result of this is seen in the vertical “stringing” present in the test targets, as observed above in the “Speed and Accuracy” section of this review.

We couldn’t tame this scope creep even with a solid, one piece scope mount. This means that the Remington Express is really only suitable for use as an “open sights” gun, or with a set of very specific – and that means expensive, like Thirty Bucks – scope rings such as the Sportsmatch rings available from Pyramyd Air.

There’s an automatic safety that, of course, requires to be actuated every time this airgun is fired. But there’s also an unusual safety reset feature that, in principal, could be very useful. Unfortunately the safety reset lever is blocked by the scope eyepiece bell – at least in the scope position we used for the HAM tests – and so it may not be operable when a scope is fitted.

You can see the safety reset lever in the photograph below. 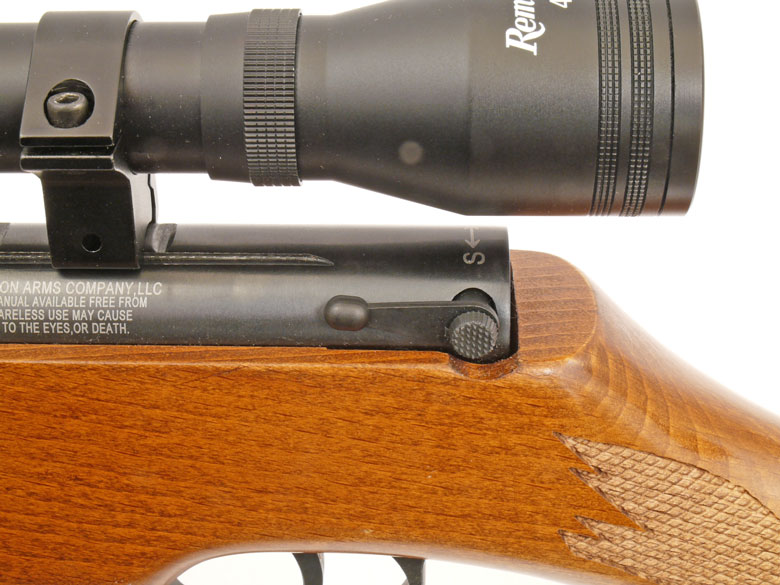 The Remington Express has a RateAGun score of 9.5, meaning that skill and experience is required to shoot it well.

Let’s leave this section with HAM tester Doug Wall’s notes. He wrote: “The Remington Express is a very nice handling gun. With better scope mounts and better accuracy, this would be a real winner”.

The Remington Express is a great looking air rifle!

The fit and finish for an airgun of this price are outstanding. Bluing is deep and machine marks on metal parts are almost non-existent.

The wood of the buttstock is just beautiful and the checkering, although obviously machine made, is very sharp, deep and attractive. It’s well done and sets the standard for every other air rifle stock in this price range. 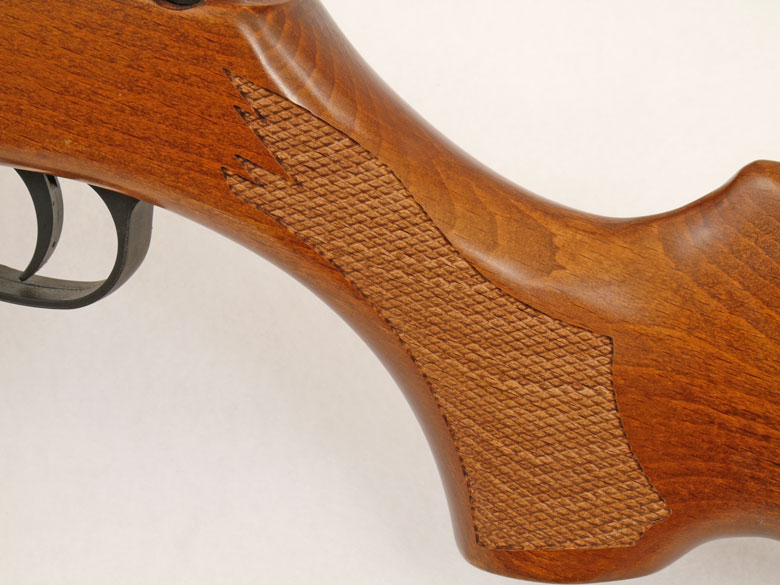 In HAM’s opinion, this has to be the best looking air rifle at this price – or anywhere near it – if you like a traditional wood and metal appearance. Remington claims that the design – or, um, at least the checkering – was inspired by that of their hugely-popular Model 700 (firearm) rifle. Hmmm, we’re not so sure about that, but it still looks great!

The Remington Express is widely available, both online and at “big box” sporting goods stores. Remington obviously has great distribution channels and this makes it easy to buy.

The excellent Owner’s Manual supplied with this airgun includes a comprehensive spare parts diagram and parts list, although it’s not yet clear – at least to HAM – how such spare parts can be purchased. HAM would also like to see a clear explanation of how to operate the unusual safety reset lever fitted to the Express.

There’s the expected 12-month warranty and Remington does not ask for any prepayment of return shipping back to the owner after warranty repairs, although the owner has to pay to ship the gun to Remington. That’s good.

However, note that warranty coverage is dependent on the owner completing the Warranty Certificate (included in the Owner’s Manual) and sending this to Remington within 30 days of purchase. Don’t forget to do this.

And take care of that high, unprotected front sight. The plastic front sights fitted to many spring/piston air rifles are often damaged by rough handling and the front sight of the Express is higher than most. 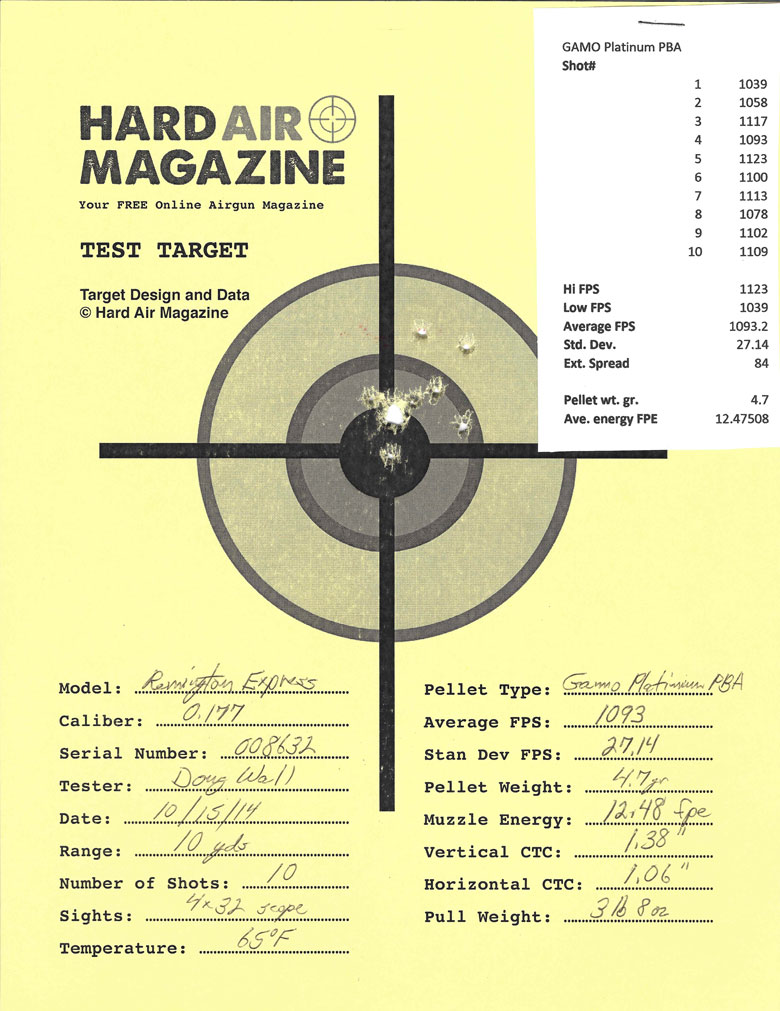 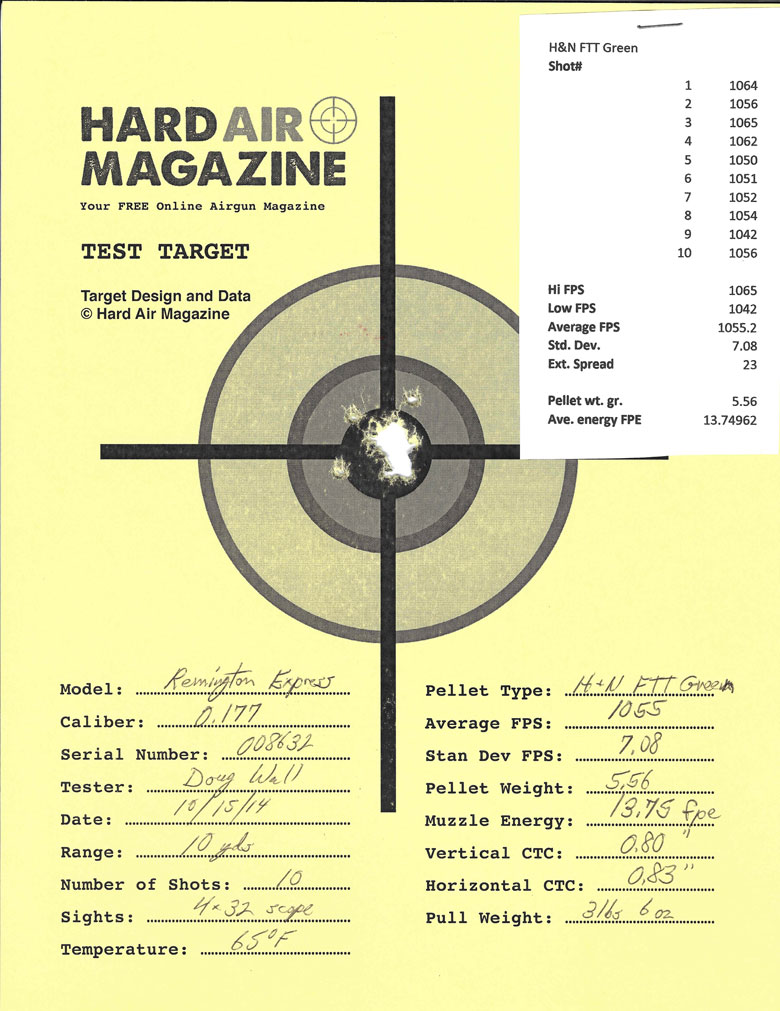 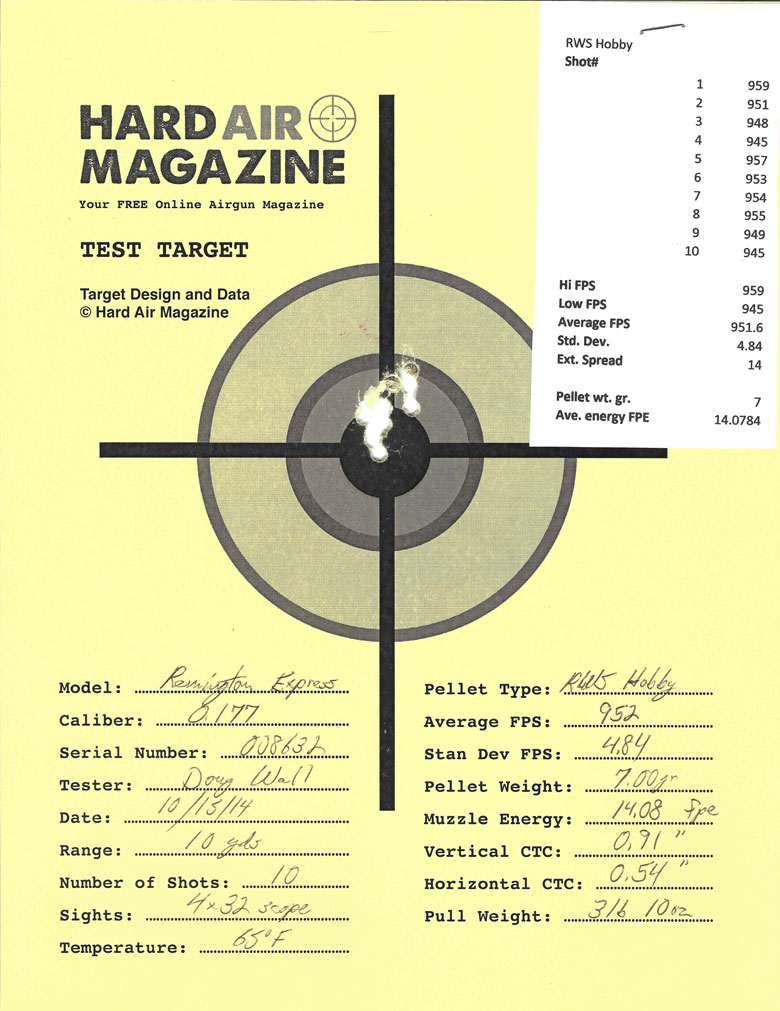 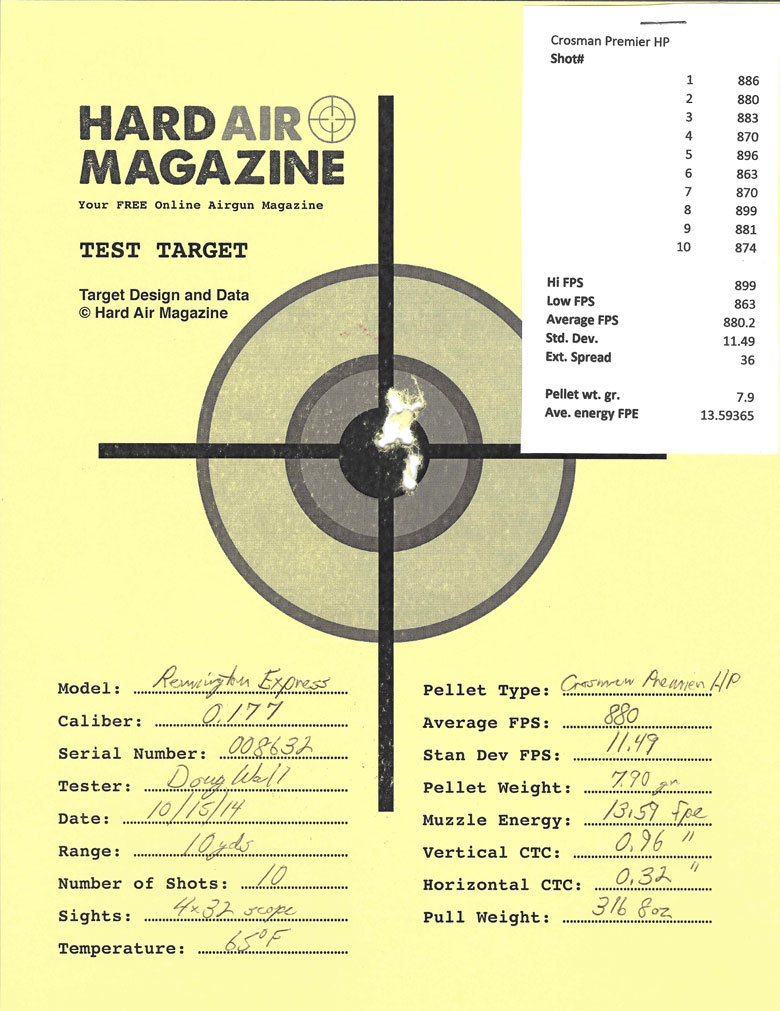 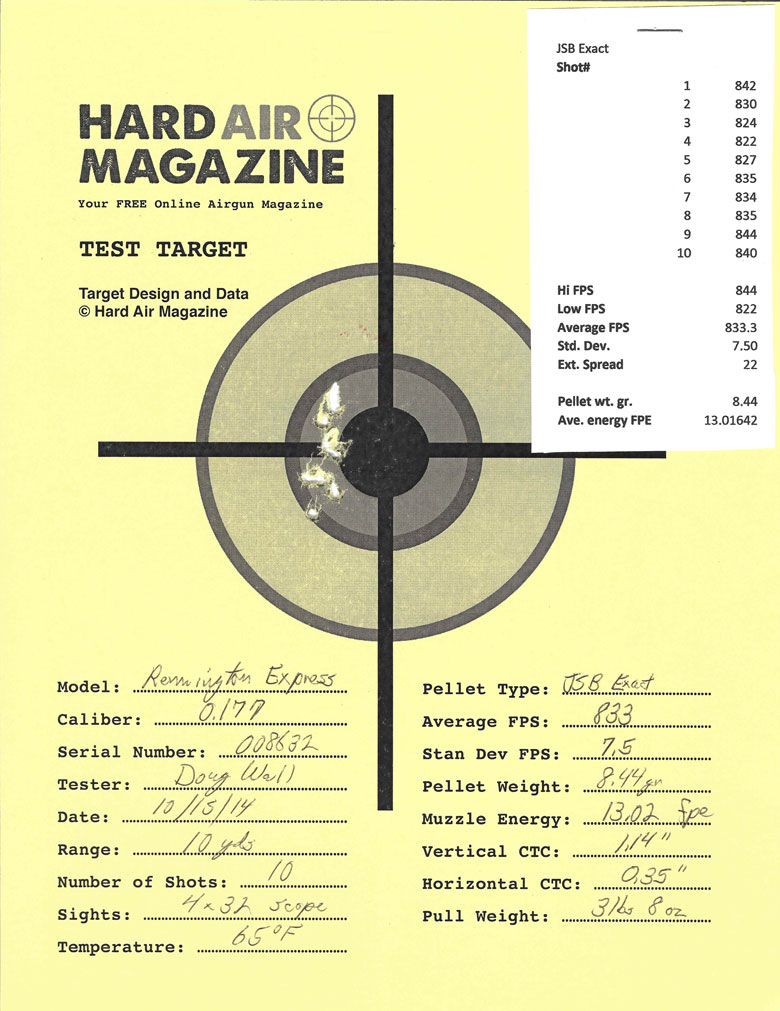 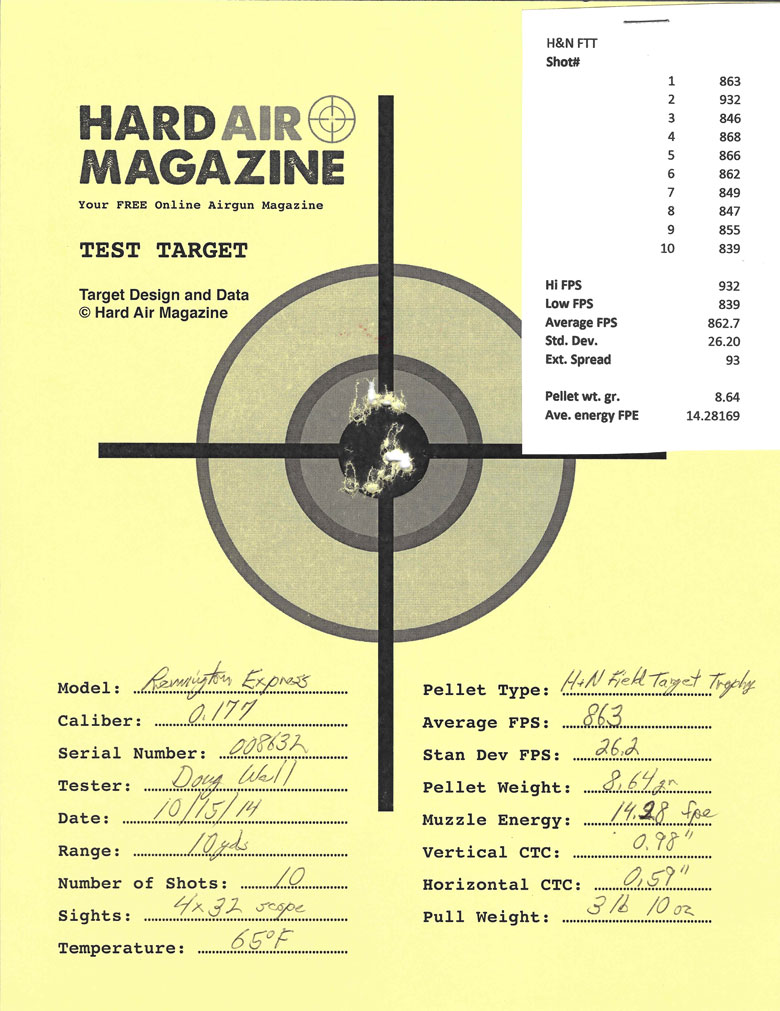 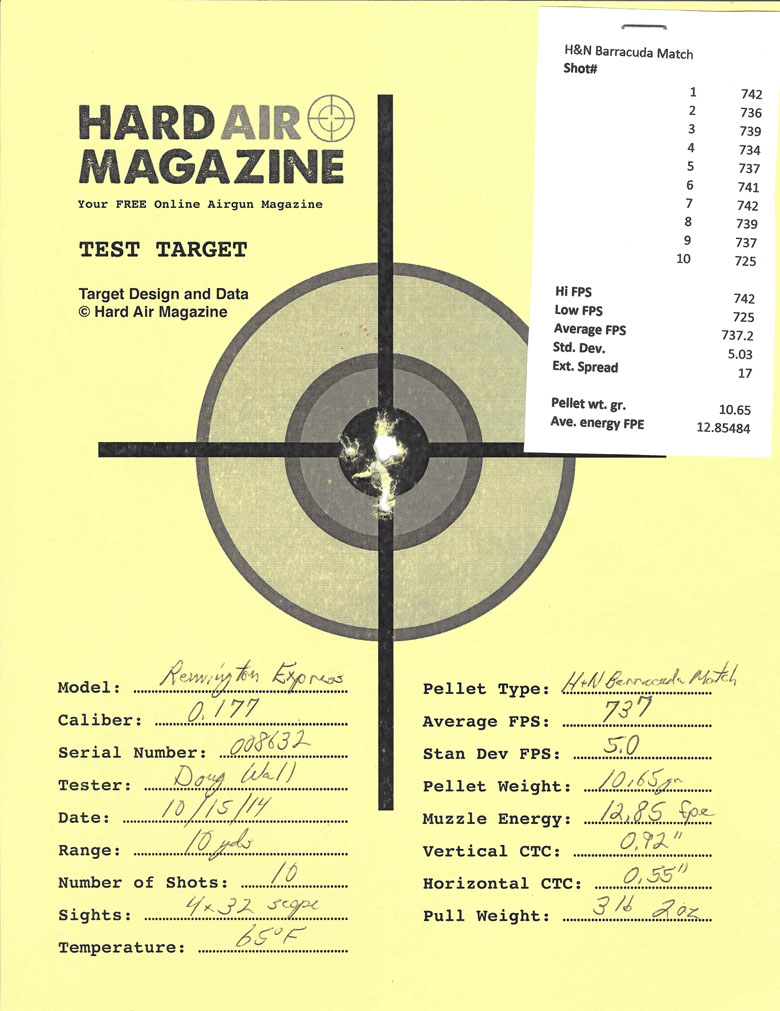 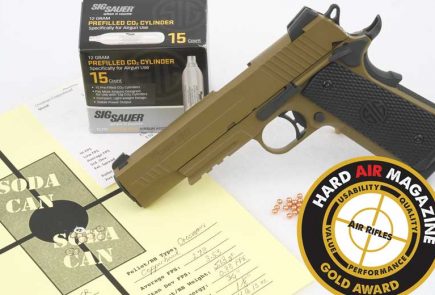 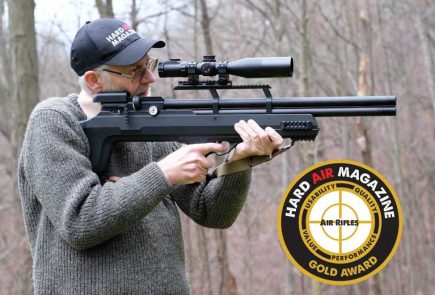