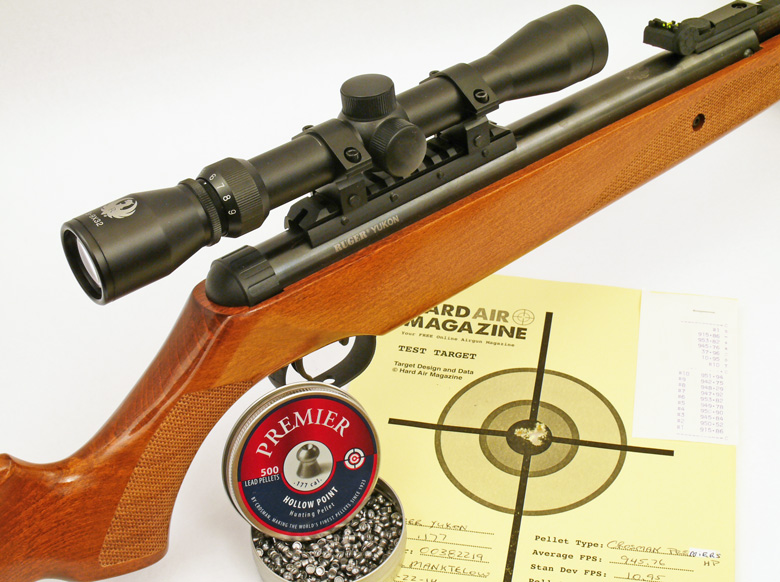 Overall the Ruger Yukon is a decent air rifle. So why didn't it score higher in this HAM test review?

The main reason is price. Compared to other air rifles distributed by Umarex USA, HAM considers the price is somewhat high for what's on offer.

For just $5.00 more, the Umarex Octane offers more power, better accuracy, a far superior scope and a 5-year warranty. But it may be too big and powerful for many shooters.

For about $70.00 less, the Ruger Air Hawk gives similar performance but has a only a 4 x scope and no gas ram or silencer. If you need quiet shooting, that may be a problem.

However, if you want the Ruger brand on a new, stylish, silenced, gas ram air rifle and are OK with the price and bundled scope, the Yukon could be just for you.

64%
HAM Rating
You have rated this
Full Review

The Ruger Yukon sells for $200 at the time of this test. At this price it offers many good features, but also faces strong competition from many air rifles with similar muzzle velocity and specifications. This is an ultra-competitive sector of the market!

If you value stylish design with a real wood stock, low noise level and a strong Weaver/Picatinny scope rail, the Ruger Yukon will appeal. But it’s let down by the scope – you may well need to budget for a replacement.

The Ruger Yukon matches the typical standard of muzzle velocity for a .177 caliber air rifle of this size and weight – around 1,000 fps with lead pellets and approximately 1,200 fps with alloy pellets. Details of the gun tested by HAM are shown in the table below.

It’s interesting to observe that the Ruger Yukon has a similar patter of performance to two other comparable air rifles tested by HAM that are manufactured at the same factory in China – the Ruger Air Hawk and the Remington Express. In every case, we found that Gamo Raptor Platinum and JSB Exact Diabalo pellets gave lower muzzle velocities than would be expected from their weight.

It’s because theses pellets are a slightly loose fit in the barrel of these air rifles, so allowing some air to blow by the pellet when it travels down the barrel. In the Ruger Yukon tested by HAM, this caused the 4.7 grain Gamo Raptor Platinum pellets to shoot slower than the 5.56 grain H&N Field Target Green pellets, even though you would expect the opposite to be the case.

As with the Ruger Air Hawk, HAM found that the Ruger Yukon gave best accuracy – just – with Crosman Premier Hollow Point pellets. As we’ve remarked before, this is a great benefit because these Crosman Premier pellets are found at almost all “big box” stores selling airguns. This makes them a very popular choice with many shooters.

Some tendency to vertical stringing was found with the Ruger Yukon tested by HAM. This may be caused by the scope – rather than the gun itself. The bundled scope moved back in the rings by nearly 1/8-inch over the course of the HAM test and this could definitely explain some stringing.

The Ruger Yukon tested by HAM gave two very distinct stages. The first stage is long and very light. There’s no missing the second stage, it’s short and heavy. In HAM testing, the trigger pull weight of the Yukon averaged 5 lb 3 oz, that’s at the higher end of the range commonly found on comparable break barrel air rifles. First stage travel length (but not pull weight) can be adjusted using the setscrew visible in the underside of the trigger blade.

Cocking effort is fairly low for an air rifle of this power – the Ruger Yukon tested by HAM required 33 lbs of effort to cock the gun. But somehow it felt harder than a spring/piston action with a similar cocking weight, probably due to the gas ram piston used in the Yukon.

Cocking action on the tested Yukon was quite smooth and the barrel lockup is good and distinct.

Overall, cocking effort is good but the trigger is heavier than we’d like.

The automatic safety operates in the counter-intuitive “pull back for safe” manner, but this becomes natural with use. What’s less acceptable is the pronounced side-to-side wobble of the trigger of the Yukon tested by HAM. Maybe we got unlucky there? 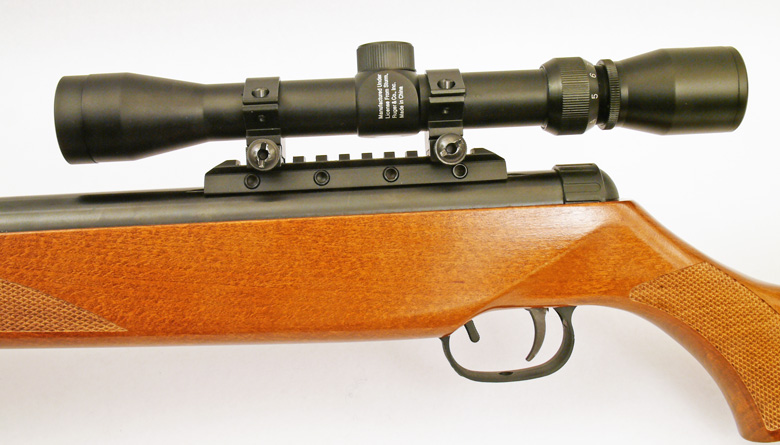 The muzzle velocity claim for lead pellets is 1,050 fps. At 1,022 fps with RWS Hobby pellets, the Yukon tested by HAM was less than 3% slower. That’s pretty close!

The manufacturer’s claim for cocking effort of the Ruger Yukon is 30 lbs. The gun tested by HAM cocked with 33 lbs of effort. Again, fairly close to the claim.

Unfortunately the average trigger pull weight of 5 lbs 3 oz recorded by HAM’s testing was hugely above the manufacturer’s claim of 3 lbs 3 oz for the Ruger Yukon. That’s disappointing…

Standard Deviation – the measure of shot-to-shot variability – was around or below 5 fps for 4 of the 7 standard HAM test pellets fired in the Ruger Yukon air rifle. That’s good performance for a break barrel air rifle, particularly one that’s new.

Unfortunately, the Yukon tested by HAM was somewhat pellet-picky. It tended to give better accuracy with heavier pellets and produced some quite pronounced vertical stringing on several of the test targets.

Trigger pull weight varied considerably in HAM tests. The lightest recorded pull weight was 4 lb 9 oz and the highest 5 lb 14 oz. That’s a large swing of 21 oz around the average of 5 lb 3 oz over 7 pulls.

The HAM team found that the Ruger Yukon’s combination of Reaxis gas ram piston and Silencair sound suppressor made the gun quite quiet. It certainly seemed quieter than a Gamo Whisper, for example.

Of course – as with any other silenced air rifle – you’ll still be plagued with very loud shooting if you use pellets that exceed the speed of sound – about 1,100 fps. That – together with improved accuracy – is a good reason to shoot the Yukon with medium weight lead pellets, such as the Crosman Premier HPs, as they will keep the noise level down to a backyard friendly level.

Fiber optic open sights are fitted to the Ruger Yukon. These are much as expected, with click-adjustable windage and elevation on the rear sight. But the Yukon’s front sight has no protective hood and the red fiber optic is very exposed, easily damaged and not easily repaired. In fact the HAM team snapped the front sight element of the test gun accidentally, in spite of considerable care.

Oops! Sorry about that Ruger… 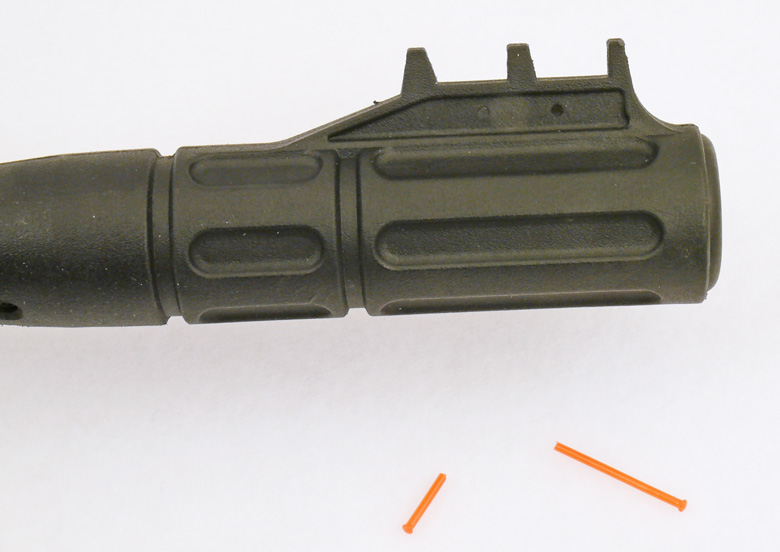 Of course a 3-9 x 32 scope is bundled with the Yukon and most shooters will use that, together with the bundled Weaver/Picatinny rings. 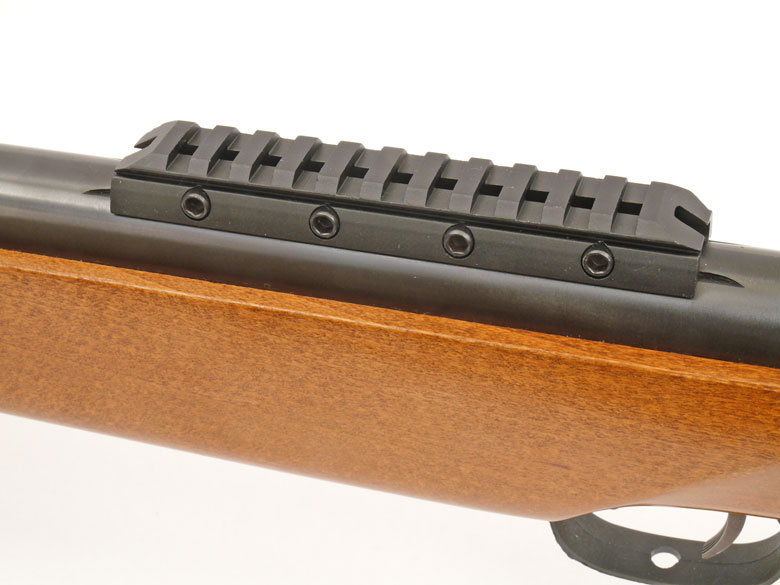 The Picatinny/Weaver rail is a great feature of the Yukon. It provides very solid, easy scope mounting. Unfortunately, in the gun tested by HAM the scope did not stay in place in the 2-screw rings supplied on the test gun. Illustrations on the packaging show 4-screw rings and – if fitted – this would certainly do a better job of restraining the bundled scope. 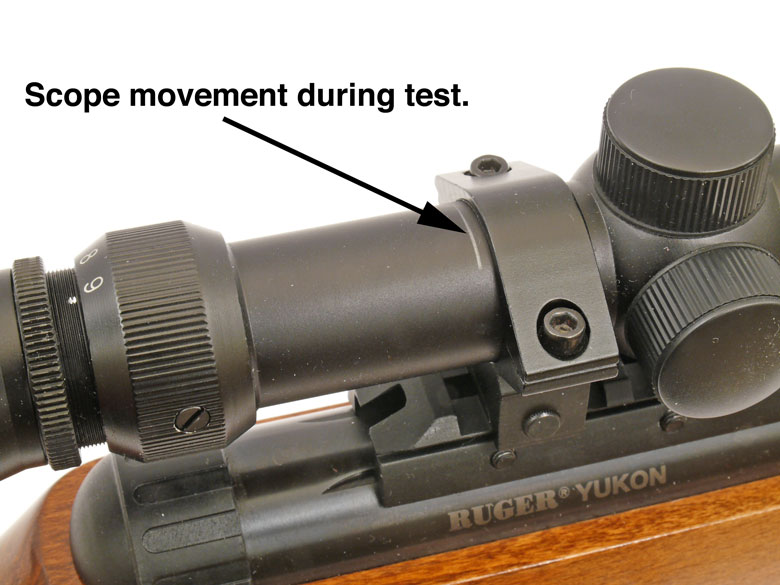 Sadly, the scope bundled with the Ruger Yukon is really up to the job. It has no AO (Adjustable Objective) for close range focusing and a duplex reticle with no mildots. Both AO and a mildot reticle are pretty much essential for practical air rifle shooting.

The HAM team recommend replacing the Yukon’s bundled scope with a superior replacement scope and rings – this would almost certainly improve the practical accuracy of this air rifle in “real life” shooting.

HAM tester Paul Manktelow noted that the “Ruger Yukon fits me nicely and balances well”. The heavy trigger pull weight and unsuitable scope were downsides to this. As always, the HAM team prefers a manual safety to the automatic safety of the Yukon, but this auto safety is a good practical feature for many of the inexperienced shooters who my buy the Ruger Yukon air rifle.

As with the vast majority of 1,000+ fps break barrel air rifles, the Yukon requires skill and experience from the shooter for accurate shooting. Use of the loose “Artilley Hold” is mandatory and a tight grasp on the gun will destroy the accuracy of which it is capable. Like most manufacturers, Umarex USA does not explain this in the instructions that accompany the Ruger.

This need for experience to achieve the best from the Yukon is reflected in its high RateAGun scope of 9.8

Fit and finish of the Ruger Yukon is very good for an air rifle at this price. Wood-to-metal fit is excellent and there’s no machining marks visible on metal parts.

The wood is pleasing and the checkering very well defined. The rubber heel of the stock with red Ruger logo is a stylish design and gives the Yukon a distinctive appearance. 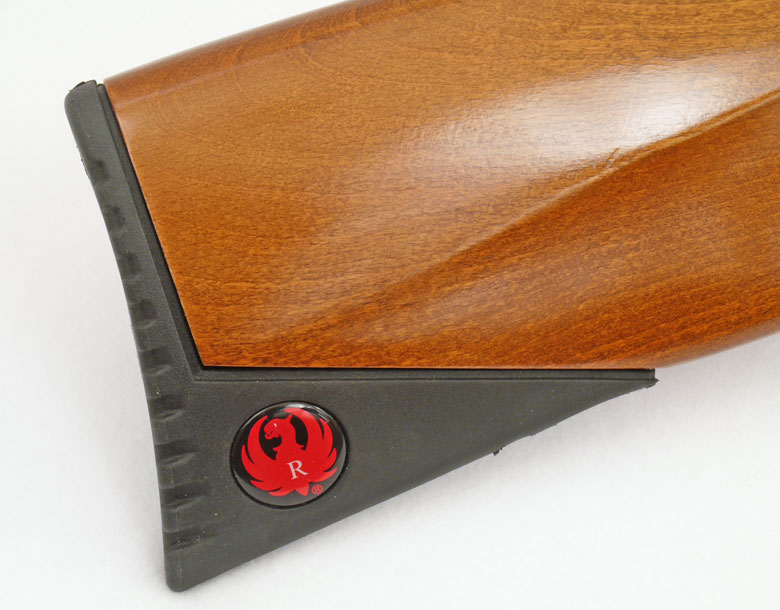 The Ruger Yukon is widely available in retail and online airgun stores, so finding one to buy is no problem.

Packaging is OK, with enough white foam to protect the gun in shipping before it gets to you.

The written instructions supplied with the Yukon are adequate.

The 12 month warranty is average for an air rifle. Details of what to do in the unlikely event of a warranty claim on the Yukon are covered clearly in the operator’s manual.

Of course, Umarex USA requires the user to pay for shipping back to them for any warranty repair work. But they also require a prepayment to cover shipping and handling for the return of the gun to you. You’ll be advised of this charge when contacting the Umarex USA Service Department.

However, Umarex USA does have spare parts available via their Service Department in Fort Smith AR and knowledgeable airgunners will be pleased to know this for the long term servicability of their Yukon.

Just make sure that you don’t break that fiber optic front sight! 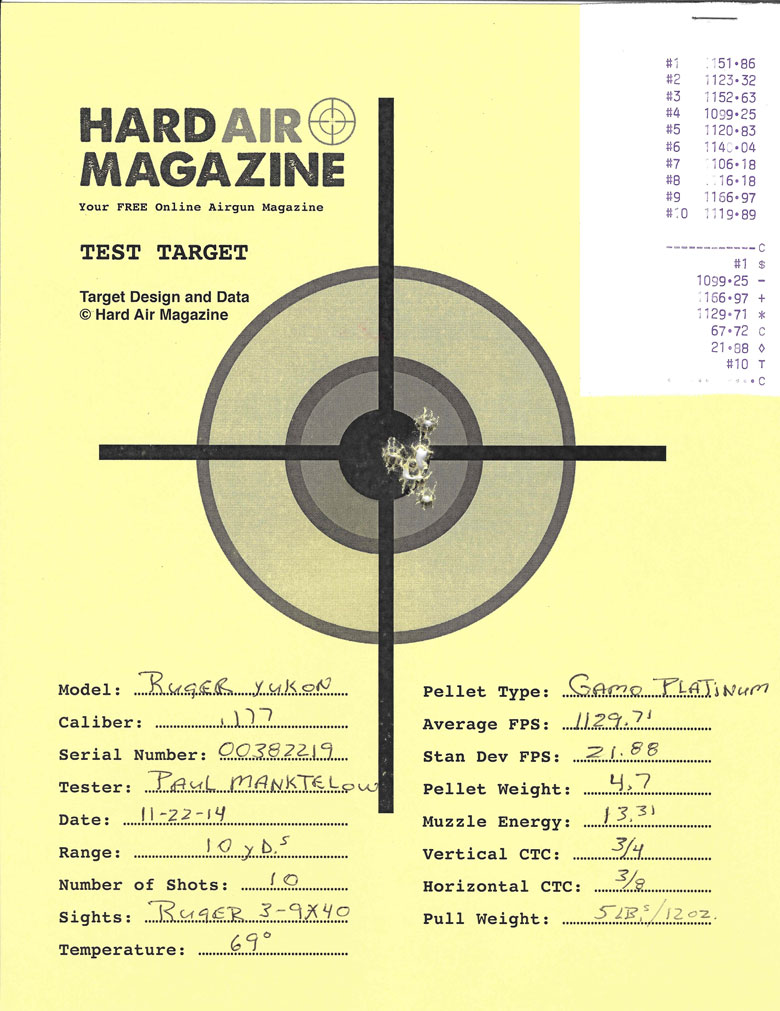 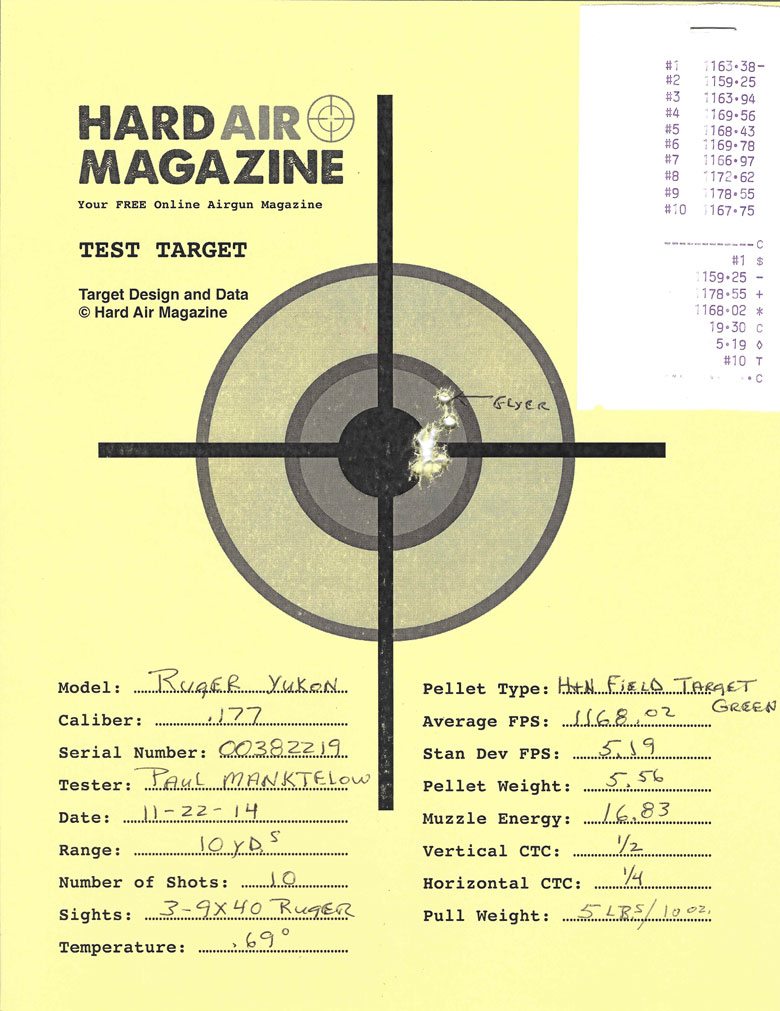 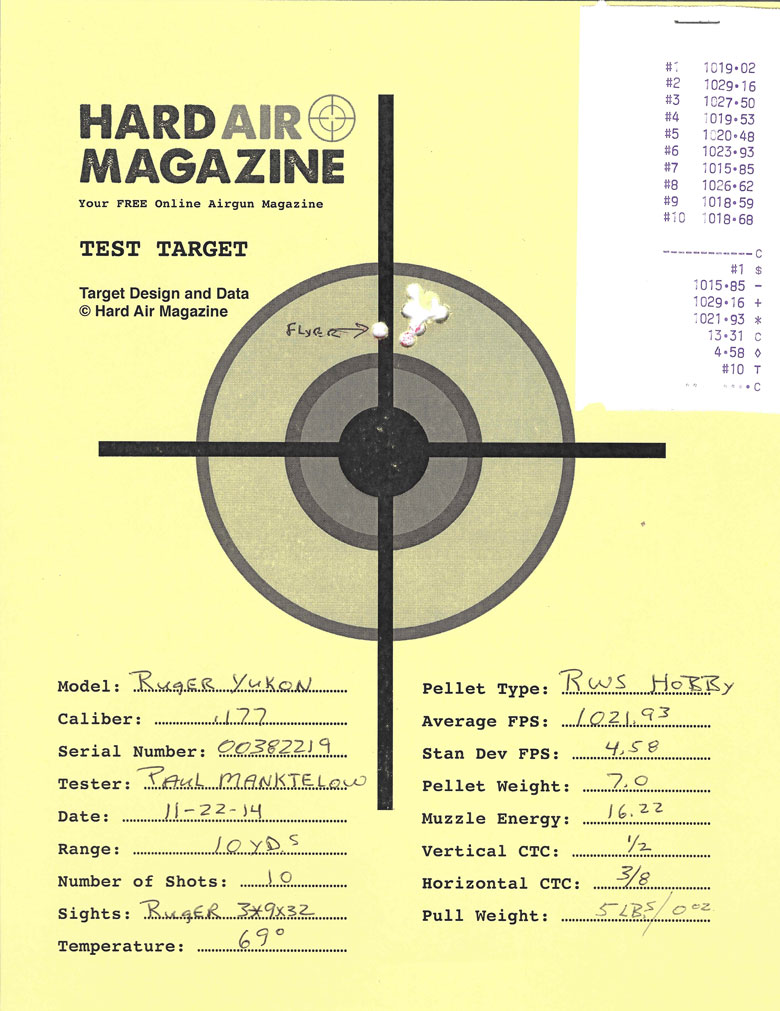 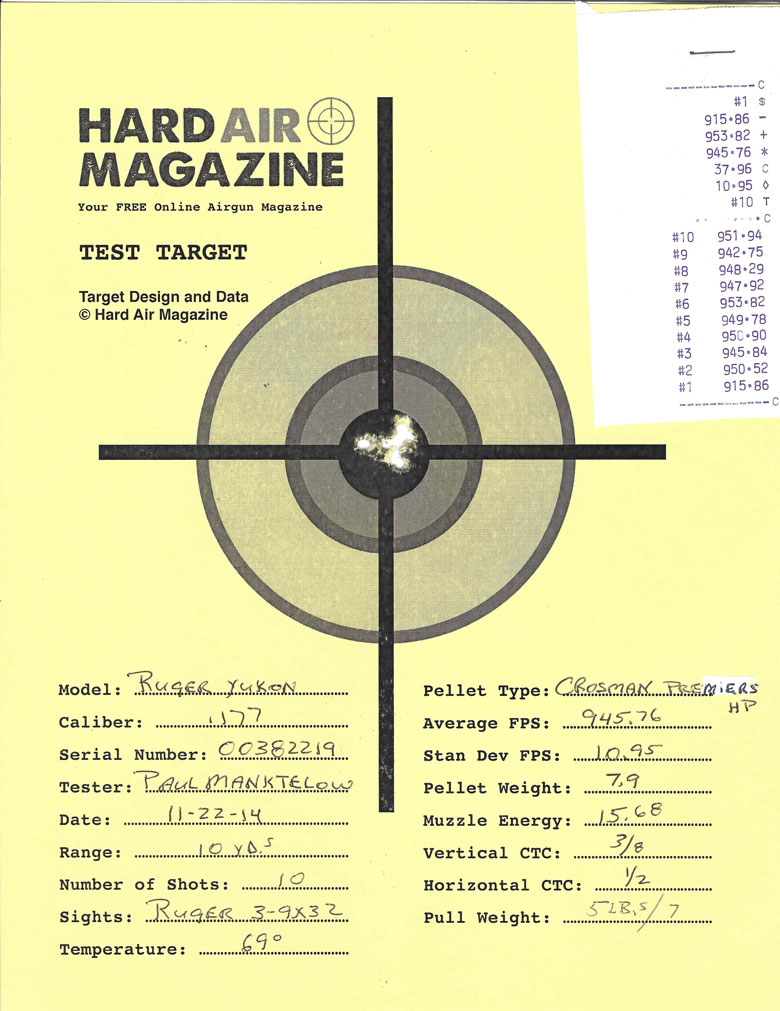 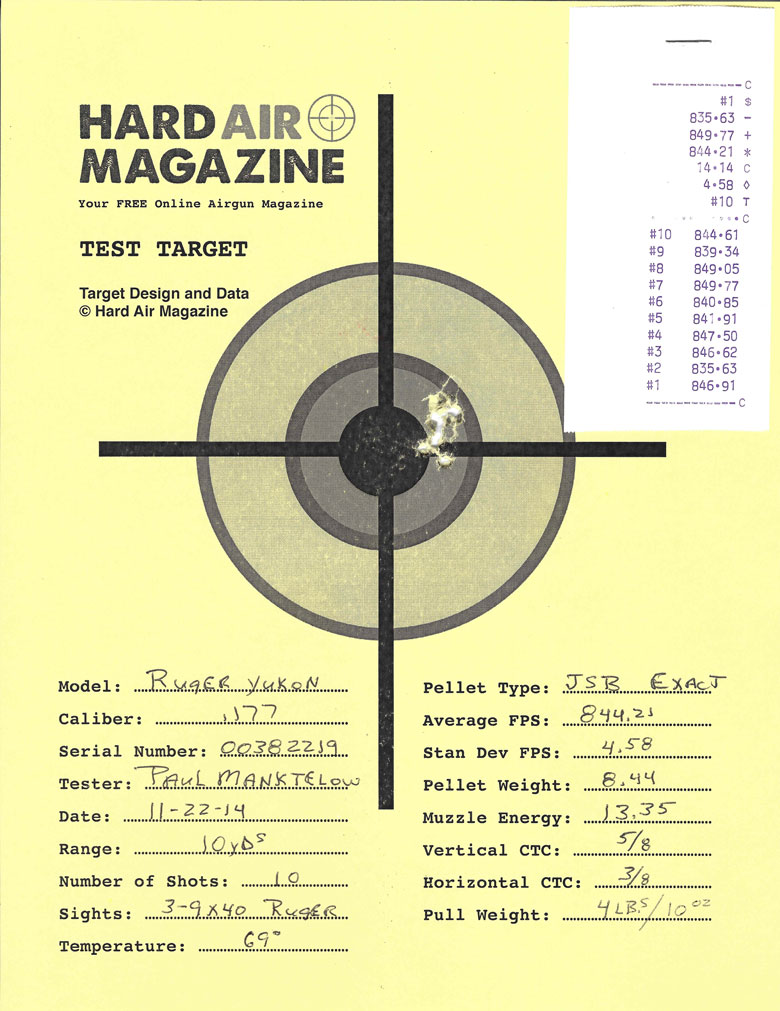 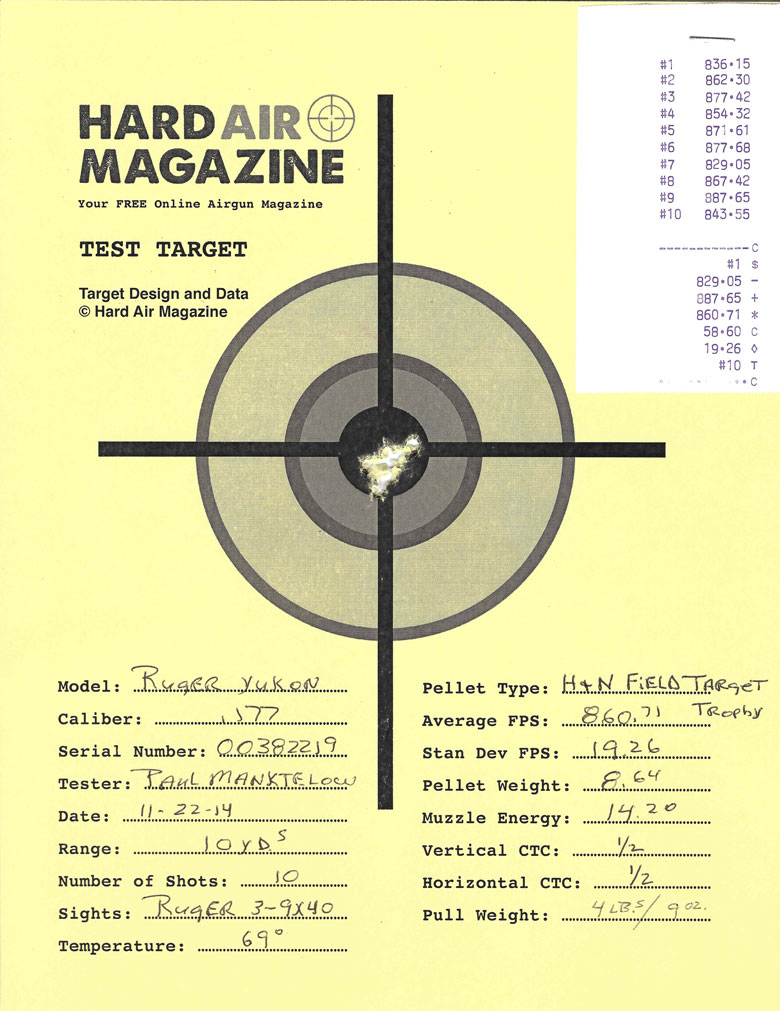 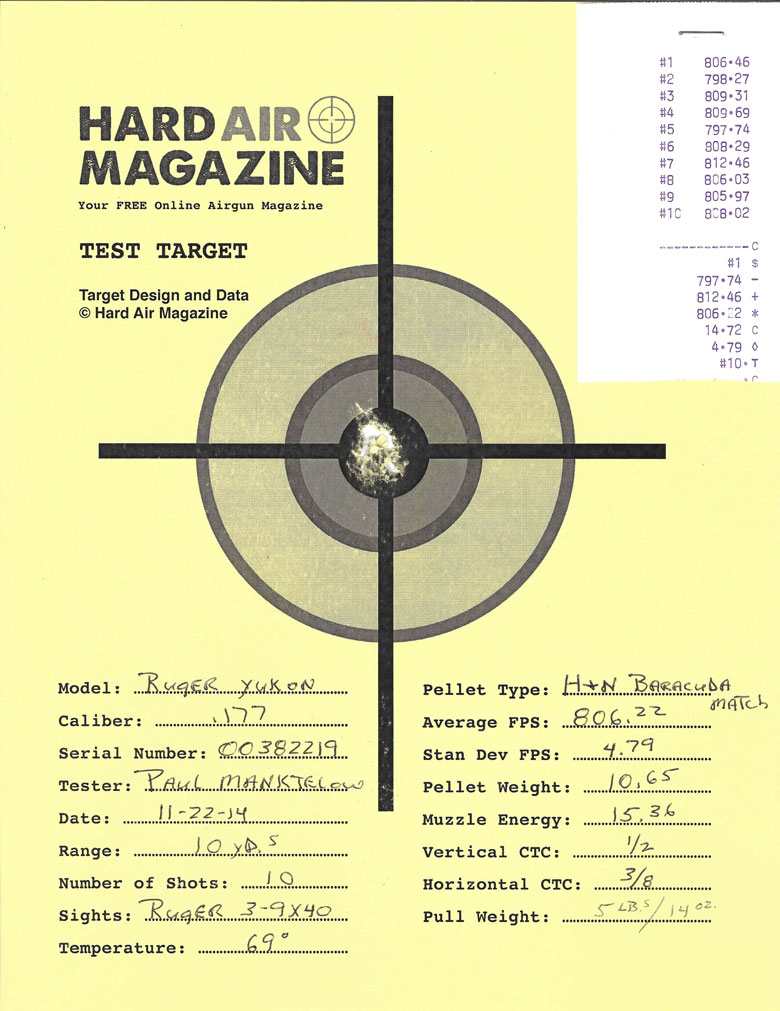