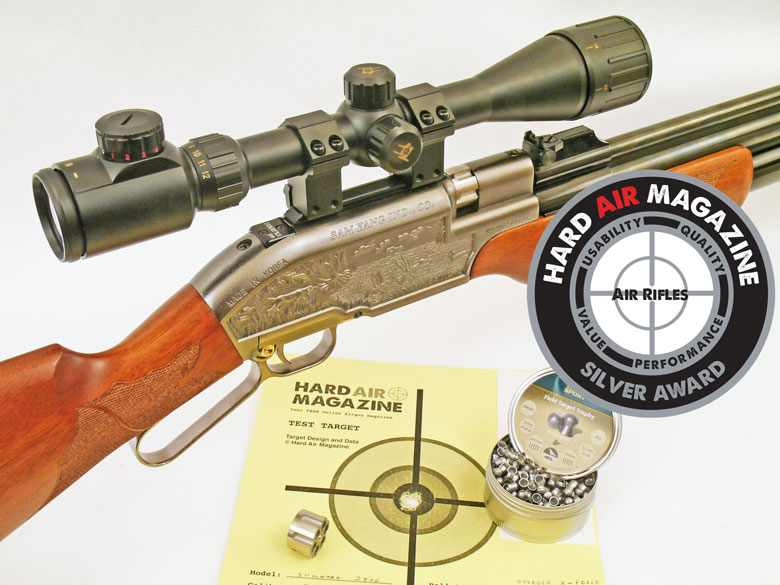 If you're looking for a high power, clip-fed PCP for varmint hunting and pest control, the Sumatra 2500 air rifle is very tough to beat at the price. It's well finished with a traditional yet distinctive appearance.

Accuracy is excellent over a wide range of pellets, although you'll want to shoot heavy pellets for the maximum knock down power.

Yes, the Sumatra 500 is loud and heavy. This is not a family-friendly everyday plinker. But for the hunter, it's a winner!

For its combination of quality, usability, value and performance, the Sumatra 2500 air rifle receives a HAM Silver Award.

86%
HAM Rating
You have rated this
Full Review

For this price, you have an extremely powerful and capable hunting air rifle. We’re nearly into big bore pricing and – especially with the .25 caliber Sumatra (at the same price) – getting close to those power levels, too.

Of course, there’s an additional cost for the air supply – as with any PCP airgun. But for hunting, the Sumatra gives about the best “bang for the Buck” of any multi-shot PCP air rifle for power, accuracy and price.

In a word, excellent!

As the table below shows, muzzle velocity was in the 1100 fps to 1350 fps range with all the standard HAM test pellets. Accuracy slipped a little with the lightest alloy pellets, the Gamo Paltinum PBAs, but it was still better than anticipated beforehand as the Sumatra 2500 air rifle is famed for its capability with heavy and super-heavy pellets.

The real strength of the Sumatra 2500 air rifle is it’s ability to generate high muzzle energies with heavy pellets. Again, you can see this in the table. The muzzle energy recorded in the HAM tests peaked at nearly 58 ft/lbs with the H&N Baracuda Match 21.14 Grain pellets. This is huge for a .22 caliber air rifle and makes the Sumatra a great hunting gun.

As the muzzle energy increased so markedly with increasingly heavy pellet weight, it’s clear that the .25 caliber version would be significantly more powerful, even that the results obtained in this HAM test.

As HAM tester Doug Rogers indicated in his notes, “If I was looking for a hunting air rifle, this would definitely be on my list”. 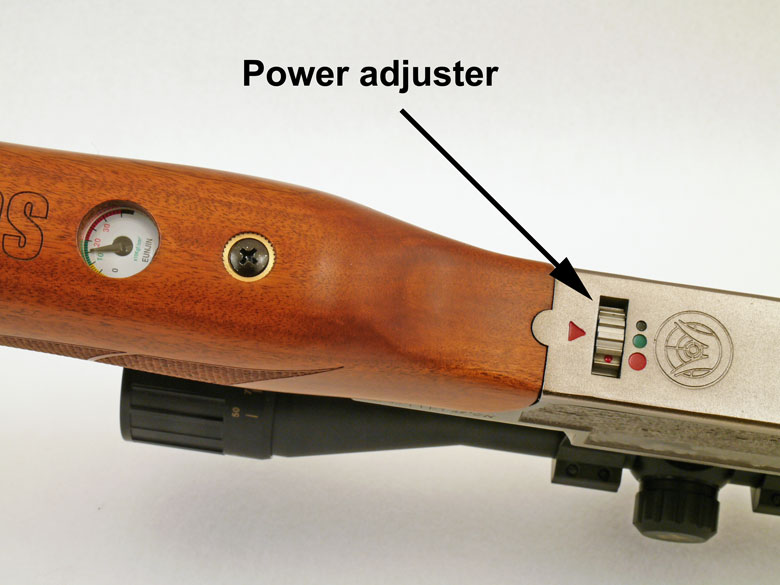 Trigger pull weight averaged 3 lb 7 oz in the Sumatra 2500 air rifle tested by HAM. This is clearly not in the hair trigger class, but it’s OK for hunting, the primary purpose of Sumatra air rifles. Specs for the Sumatra say that trigger has a two stage action, but we could only detect a single stage. Let off was predictable, a good attribute to accurate shooting.

The trigger of the Sumatra 2500 air rifle is adjustable for pull weight and the instruction manual provides instructions for how this can be done. As is normal for HAM tests, we resisted temptation and tested the gun with the trigger as set by the factory. 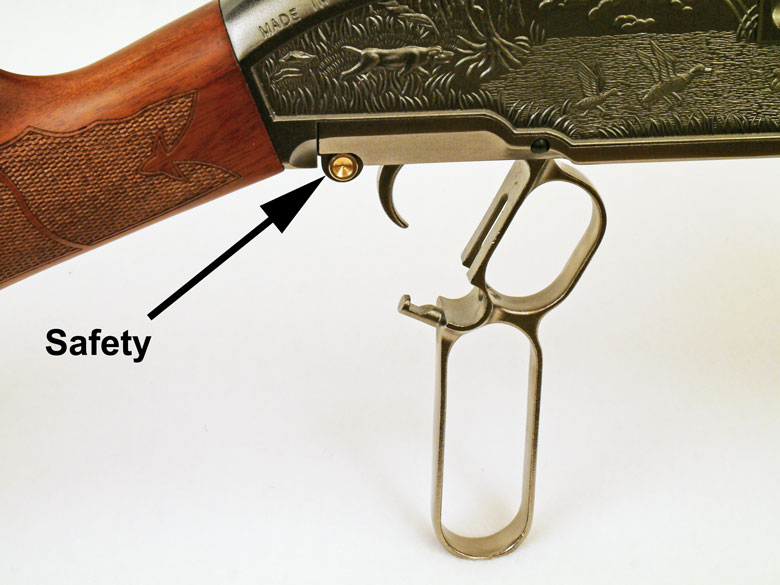 The underlever cocking action is, of course, somewhat unusual for an air rifle. It’s a natural action, although the HAM test team found that the cocking lever got to be uncomfortable on the back of the hand if firing many shots at one sitting. Of course the Sumatra is mainly a hunting air rifle, so this would not normally be an issue as few shots are generally fired when hunting.

The cocking effort seemed hard, compared to a sidelever action, for example, but it became easier as the Sumatra was shot repeatedly. HAM measured the cocking effort at approximately 21 lbs.

The manual safety is conveniently located just behind and above the trigger. It’s a push across type that worked well for the HAM testers.

The operator’s Manual for the Sumatra 2500 makes an accuracy specification claim of 3/8-inch at 30 yards using Eun Jin pellets. Now, HAM’s test did not include Eun Jin pellets, neither did we shoot at 30 yards. And the manufacturer’s specification does not specify the number of pellets in their accuracy claim – but we can probably assume it was for 5 shots.

Based on the accuracy achieved with the wide range of pellets tested by HAM in 10-shot groups, we’d say that the manufacturer’s claim for accuracy of the Sumatra is very likely to be achieved by a good shot on a calm day.

The only makers claim for the Sumatra that we could not substantiate was that for the trigger. The HAM testers’ view is that the Sumatra’s trigger is quite OK, but that it has s a single stage. We could not find the second stage claimed by the manufacturer.

The Standard Deviation (measurement of muzzle velocity consistency) for the Sumatra tested by HAM was interesting. It was consistently inconsistent! The Standard Deviations measured were all in the range between about 14 and 21 fps, with an average of 17.38 fps. This is due to the unregulated nature of the Sumatra’s design: as each shot is fired, the remaining pressure is reduced, so the next shot is slower, and so on. The high power output of the Sumatra means that this shot-to-shot drop is greater than you would find with lower powered unregulated PCP air rifles such as the Benjamin Marauder.

This Standard Deviation is far higher than normally found in HAM’s tests, but it certainly did not seem to have any ill effects on the accuracy – as you can see from the test targets.

Trigger pull weight was also pretty inconsistent in the gun tested by HAM. It varied between a low of 2 lb 9 oz to a high of 4 lb 11 oz, a spread of nearly 2 lbs. Again, despite this inconsistency in trigger pull weight, the accuracy obtained in the shooting tests obviously did not suffer as a result.

There’s no surprise about this as the Sumatra 2500 air rifle uses a lot of air for each shot, propelling almost all of the pellets tested at supersonic muzzle velocities. We were wearing ear defenders on the range for this test, for sure.

Obviously the Sumatra in standard form is not fitted with a suppressor of any type. However, the muzzle is threaded for an aftermarket silencer and this would undoubtedly make a big difference to the report. Just make sure that you comply with all ATF and other rules and laws if you take this route.

The Sumatra is fitted with a very robust set of simple iron sights. There’s no fiber optics and the rear sight requires a screwdriver to alter elevation. But most owners will see these iron sights merely as a backup and will fit a scope for their shooting.

The Sumatra 2500 air rifle tested in this review is the “Premium bundle” sold by Pyramyd Air. This bundle includes a Tech Force-branded 4 – 12 x 40 AO scope and Leapers high profile rings.

This Tech Force scope is well balanced in size and capabilities to the Sumatra 2500 air rifle. It has AO (Adjustable Objective) for sharp focusing down to 7.5 yards range and the 12 x magnification is about as high as most shooters are able to exploit successfully in the field. Optical quality seemed good for the price of the scope. 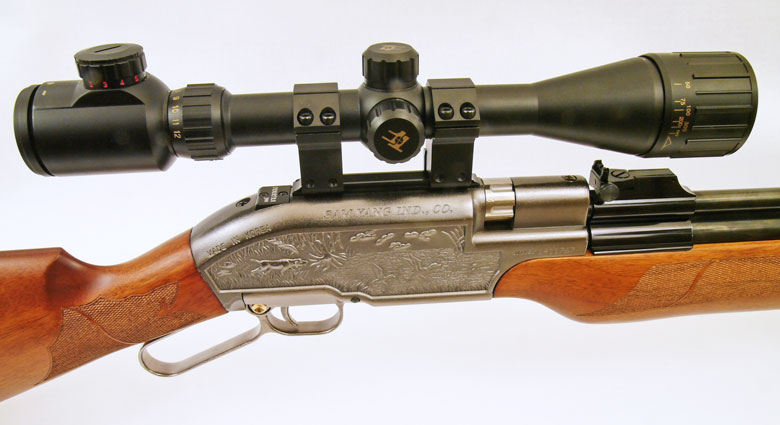 This scope has a mil dot reticle, which HAM considers an essential for practical airgun use. This reticle also has selectable red and green illumination, if this is required by the shooter for low light shots. We found the front focusing ring somewhat heavy to turn and the reticle illumination knob even heavier, but these would probably ease with use and in warmer temperatures than Up-State New York in a snowy January.

It looked as if the Sumatra’s scope rail would be rather short for mounting the scope. But we were mistaken – OK, actually Steve was mistaken! – as there were no issues on this score. HAM tester Doug Rogers found it easy to mount the scope and set its position to give him the right eye relief.

Make no mistake, the Sumatra 2500 air rifle is heavy. When fitted with the scope – as tested – the total weight was 10 lb 3 oz. This weight certainly made us think that a sling would be useful for use in the field.

Yet the Sumatra balances well when brought to the shoulder and gives a good cheek weld. When shooting, it didn’t feel as heavy as it weighed. This is confirmed by the RateAGun score of just 4.5, which means it’s easy to shoot.

Shootability is aided by the 6-shot rotary clip. This makes loading easy and obviously gives a rapid follow-up shot capability when hunting. We noticed that most of the HAM test pellets loaded into the clip better from the front rather than from the rear – as recommended by the instructions.

Pellets also tended to fall out of the clip if it was carried around in a pocket, so it’s not practical to pre-poad clips and carry them into the field. As pellets are held in the Sumatra 2500 air rifle’s clip simply by friction, it may be that Eun Jin pellets may work better in this respect.

The HAM testers noted that a few H&N Field Target Trophy Green pellets would not fit into the clip at all. But as the Sumatra is not really intended for use with super-light pellets such as these, we did not consider this a serious flaw. 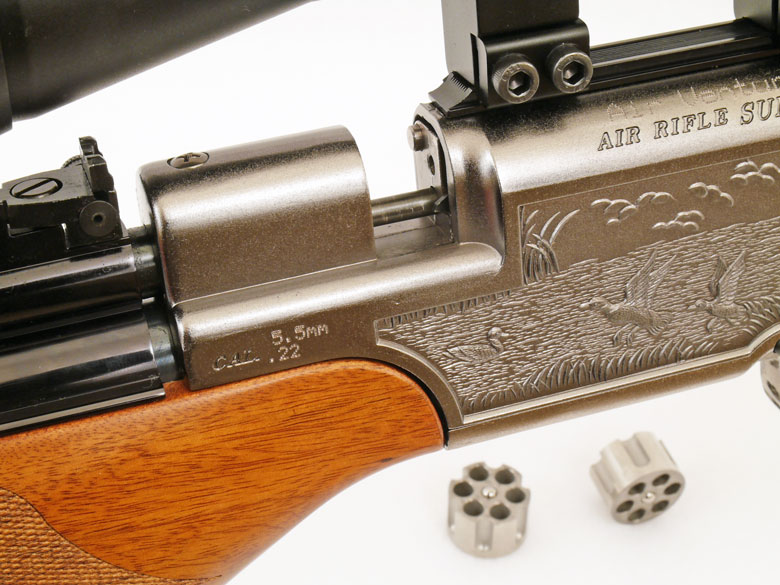 It was good to find that the Sumatra 2500 air rifle features double feed protection – we could not manage to make it double feed, in spite of much trying. This is certainly a good practical advantage of the Sumatra over clip-fed air rifles – like the Marauder, for example – that can allow the gun to be “double loaded” if the shooter loses track of the loading and firing sequence.

From a distance, the Sumatra 2500 air rifle looks more like an “over and under” shotgun than an airgun! This, of course, is due to the double air tubes under the barrel. So this is an unusual-looking airgun, with an appearance that’s all its own. The looks certainly grew on the test team over time…

Finish of the metal parts is excellent, with strong, deep bluing for some parts and glossy black paint for others. The receiver, cocking lever and trigger are all castings, with the receiver having a deeply-inletted hunting scene on either side. 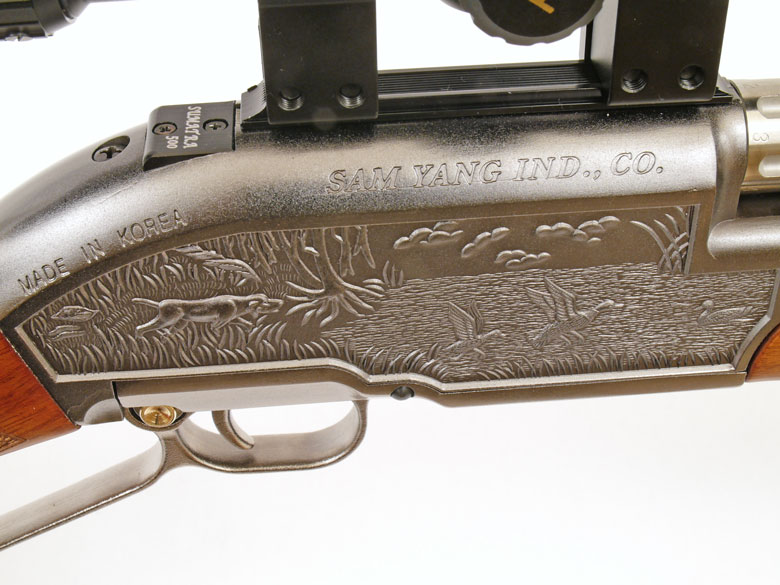 Wood finish was generally very good, with finely-figured checkering. We detected a very slight roughness on the sides of the buttstock, but didn’t find this objectionable.

Overall, the Sumatra 2500 is an all wood and metal air rifle of traditional construction – if not traditional looks. HAM tester Doug Rogers found it “A beautiful looking gun. Pictures do not do it justice”, he added.

You’re not going to find the Sumatra 2500 air rifle for sale at your local “big box” sporting goods store. But it’s easy to find on the Internet as it’s distributed by Air Venturi, the associated wholesale arm of Pyramyd Air.

The operator’s manual is useful and quite comprehensive, featuring clear parts lists and diagrams for those owners brave enough to think they may open up the gun themselves. The US distributor, Air Venturi, has a full range of parts available for the Sumatra and provides support for the 12 month warranty on the air rifle. 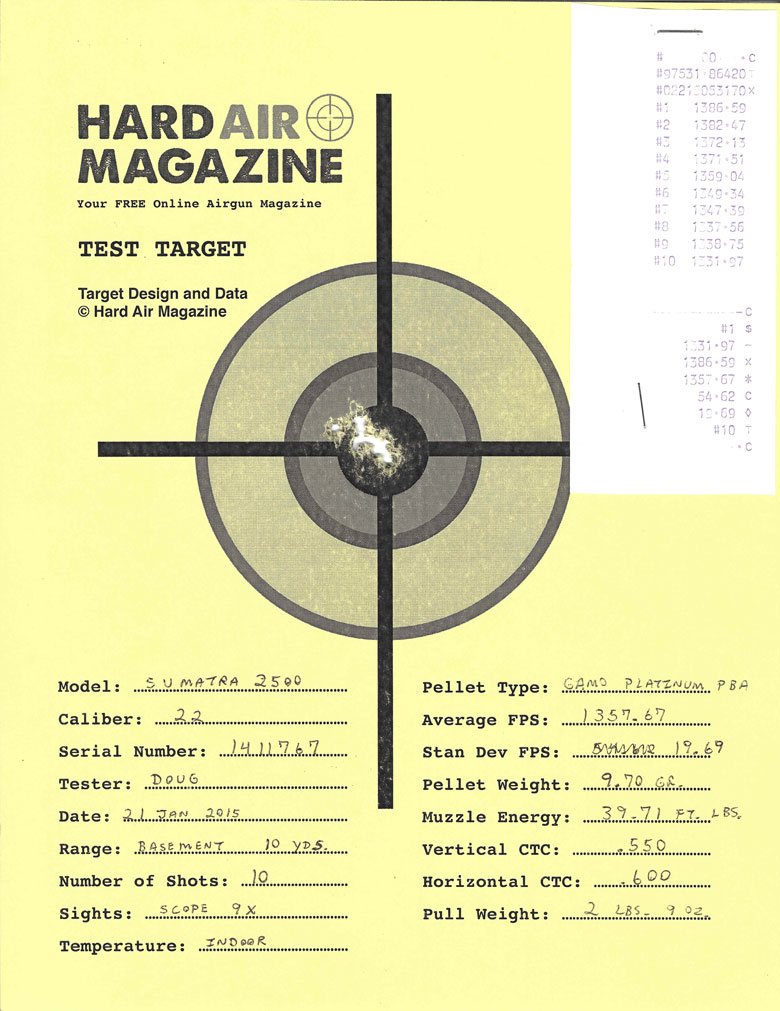 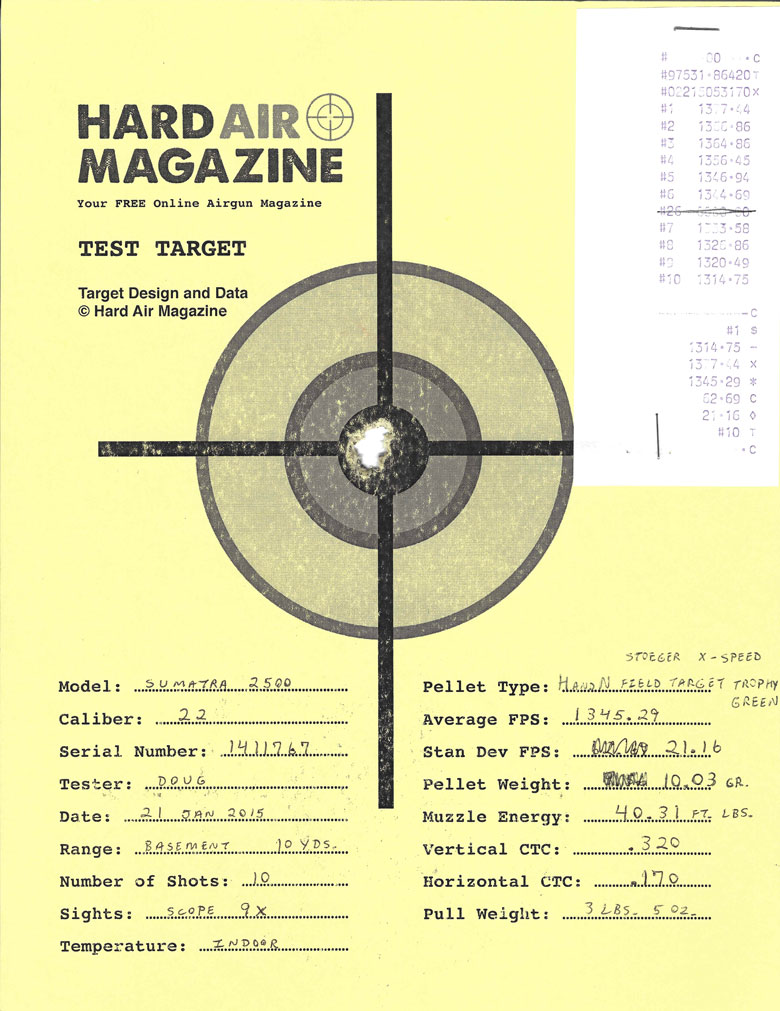 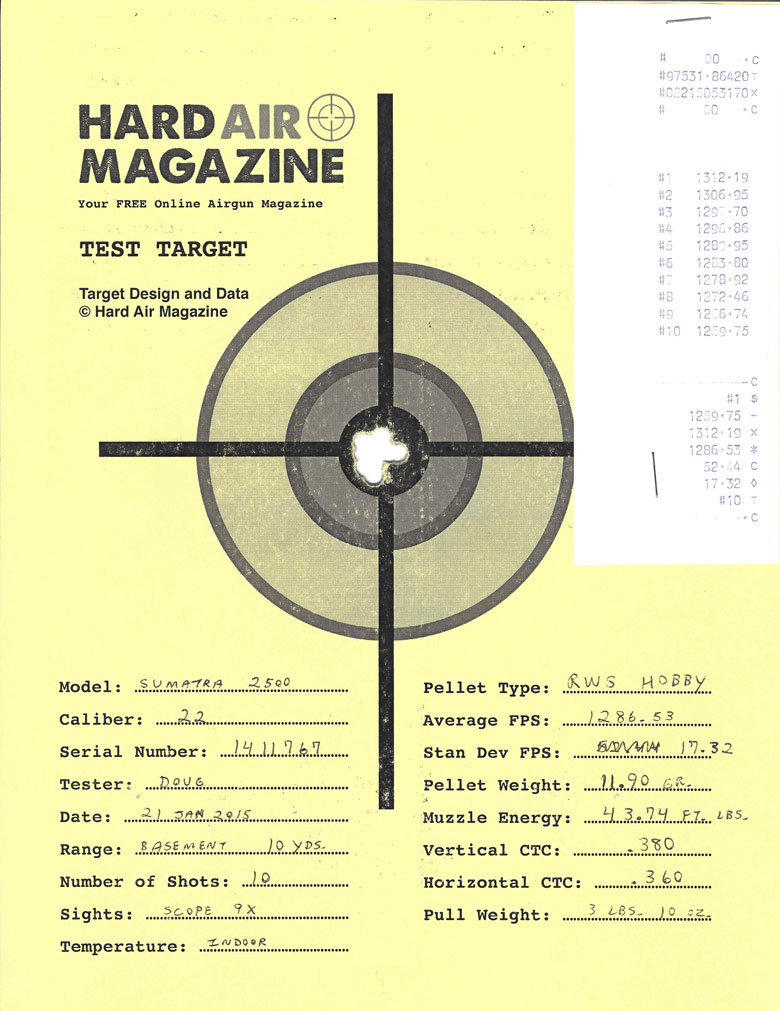 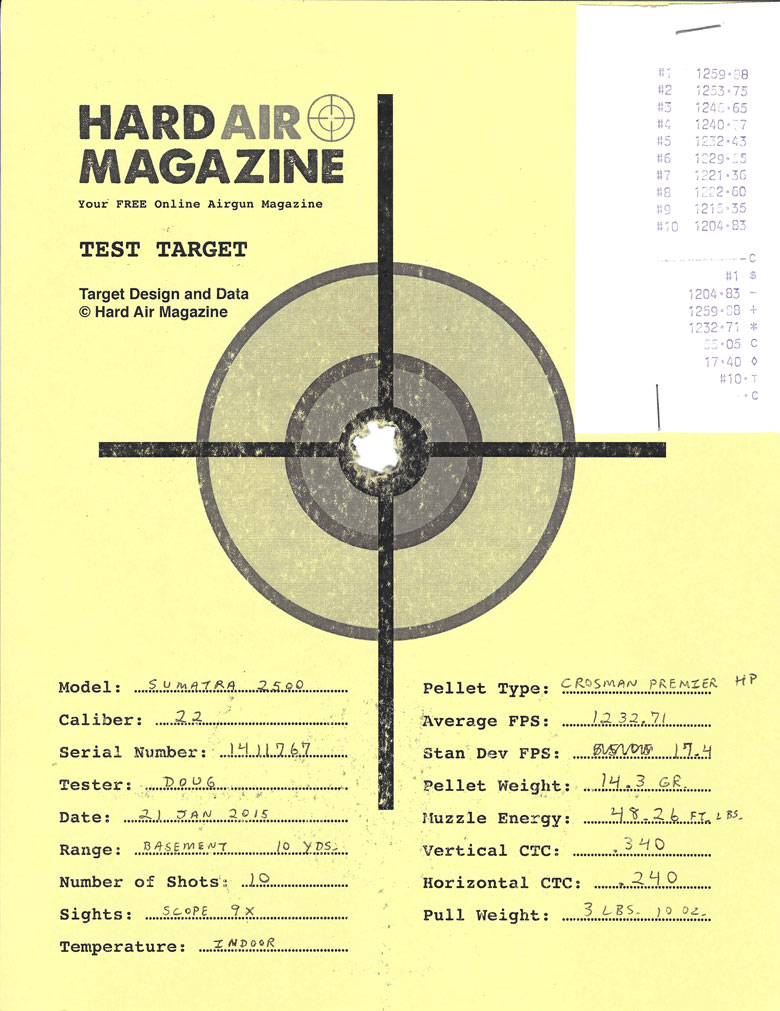 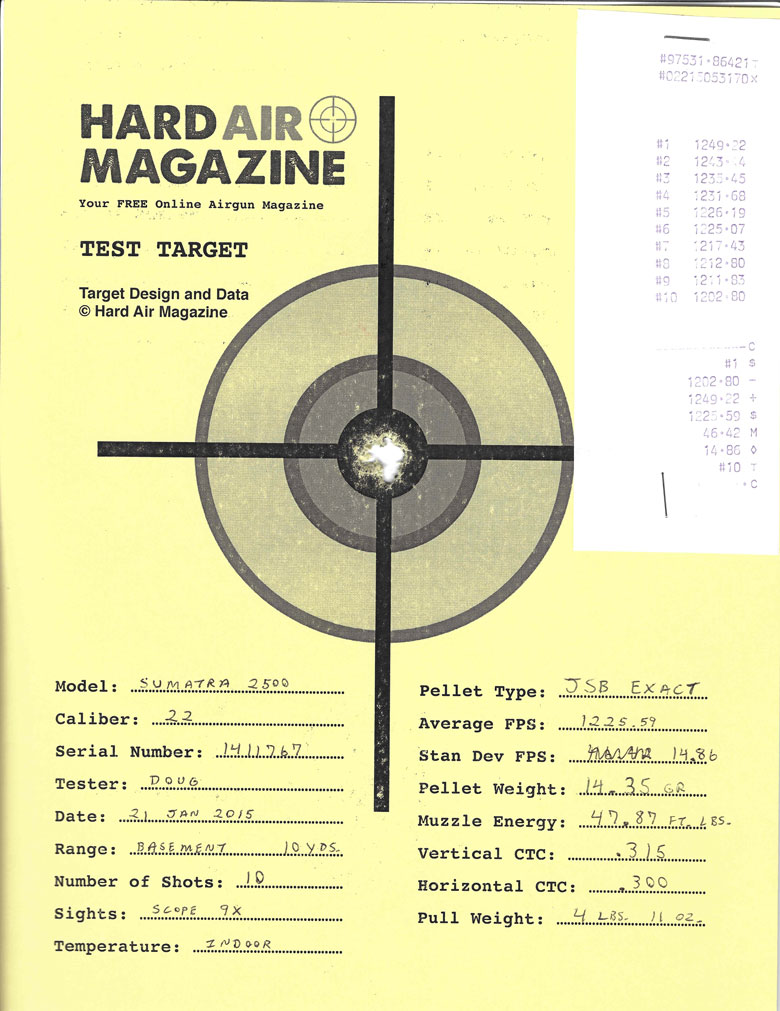 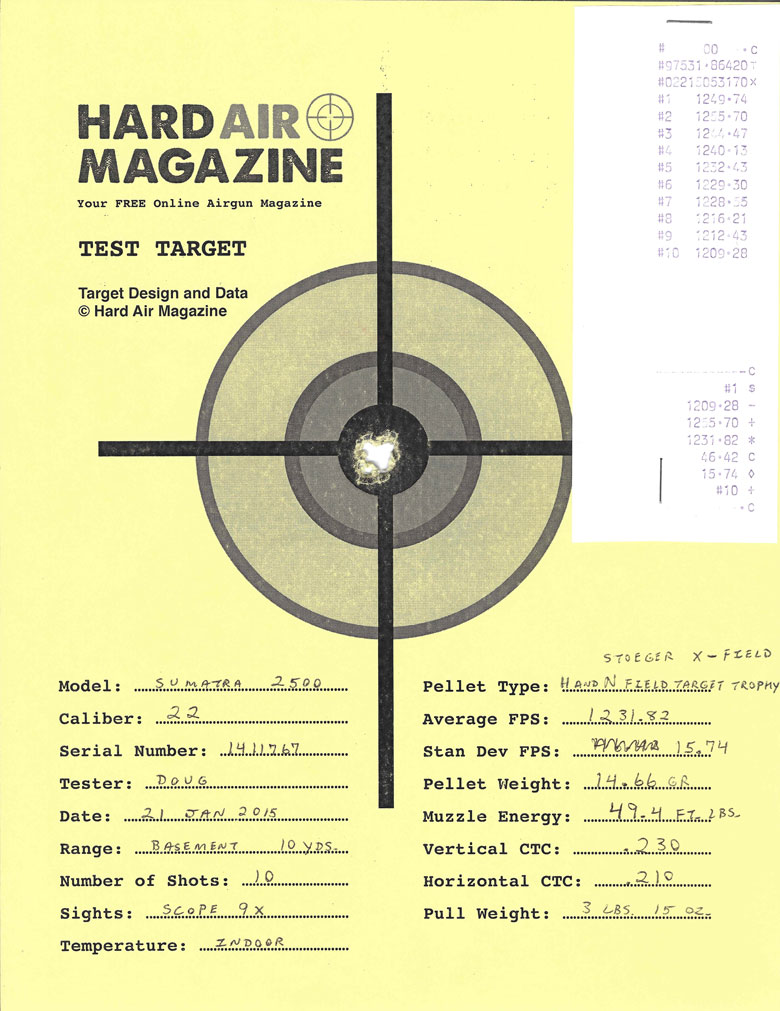 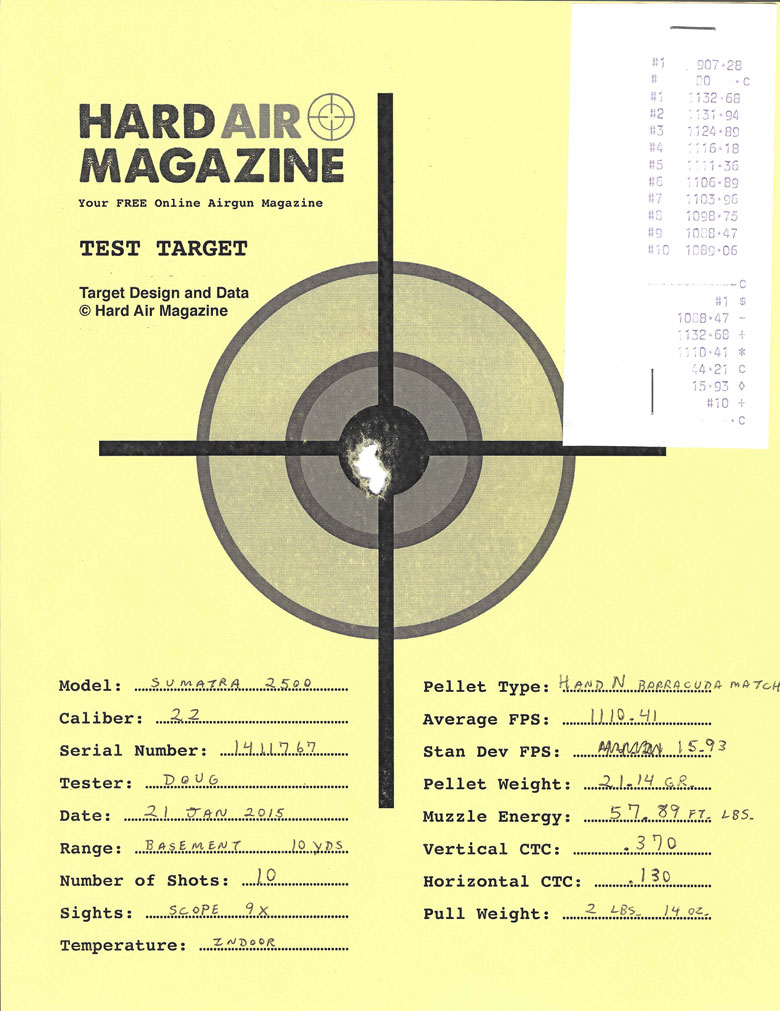